After confirming the title of the Serbian Super League, Red Star Belgrade aim for the Serbia Cup when they host the final of the competition against Partizan. Both teams have got the back of long winning streaks and will look to continue them in their pursuit of glory.

Red Star to make Belgrade their own

Red Star Belgrade and Partizan have been incredible in the recent games and produced an identical sequence of seven wins in a row. But the Star will be more positive over their home advantage, having consecutive four winnings. On the other hand, The Black-Whites ended two of the previous four away challenges in a draw. Red Star Belgrade are also undefeated in the last six H2Hs against Partizan, winning two in that course. So we expect the Red-Whites to continue the sequence in this game and seal the title.

None of the last five H2Hs has gone with over 2.5 goals but the teams have produced the successive high-scoring total in their recent attempts. Red Star Belgrade got the ball into the net 16 times in just the previous five outings while Partizan also rattled the net at least twice in all of the recent five games. So there will be a high chance to see a change of trend in this duel.

Red Star Belgrade vs Partizan Belgrade: Check out the best odds and the latest stats

The Star got the consecutive fifth league title with a victory against Vozdovac on the final game day of the campaign. Red Star Belgrade had to win all of the rounds of the championship round to stay in the race. The team manager Dejan Stankovic will enjoy a fully healthy squad ahead of this game.

The Steamroller stayed in the title race of the Serbian Super League till the last game but earned the second position at the end. Partizan defeated Radnicki Nis in the last game with a score of 2-0. Danilo Pantic can’t be considered for this game due to a cruciate ligament injury. 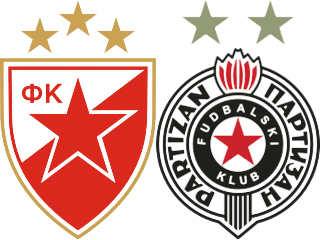 Where is the game being played? Stadion Rajko Mitić (Belgrade).