Lyon may have lost Alexandre Lacazette, Corentin Tolisso and Maxime Gonalons this summer, but the French club haven’t stood still.

OL spent €50.5million on bringing in eight players, with the hope that it will take them back into the top three and give them a chance of making a return to the Champions League.

It would almost be a disaster for ambitious president Jean Michel Aulas if they had a repeat of last term.

Mariano Díaz has stole the early headlines: the former Real Madrid forward has hit the ground running in Ligue 1. Bertrand Traoré was also added to the attack from Chelsea and they joined Memphis Depay, last winter’s blockbuster arrival from Manchester United.

However, the player making the difference isn’t a big-money signing.

Nabil Fekir, a graduate of the OL academy, has been the talisman in their attack so far this season and it’s a sight for sore eyes after the France international took his time recovering from a cruciate knee injury picked up on duty for his country in 2015.

When he broke through in 2014, he was outstanding. Playing in a 4-4-2 with Lacazette, he scored 13 goals, adding nine assists. Much was expected from his follow-up campaign, but it was cut short just four weeks in.

Coming after an exciting hat-trick against Caen, he would leave to play for France. Then the sad images emerged of him coming off the field on a stretcher against Portugal. He returned with five games to go, but was restricted to substitute appearances.

Last season was supposed to be his triumphant return to form, but in 49 games, 14 goals and 12 assists, something seemed missing.

That spark, a burst of acceleration, a fearless drive forward: everything that he had shown for Les Gones looked to be lacking. Although still productive enough to play from the start, he wasn’t that same explosive player.

“Nabil came back very sharp. As I often said, you tend to devalue his season last year. He scored 14 goals and 12 assists, which is a good season,” coach Bruno Génésio told OLTV at the start of the campaign. 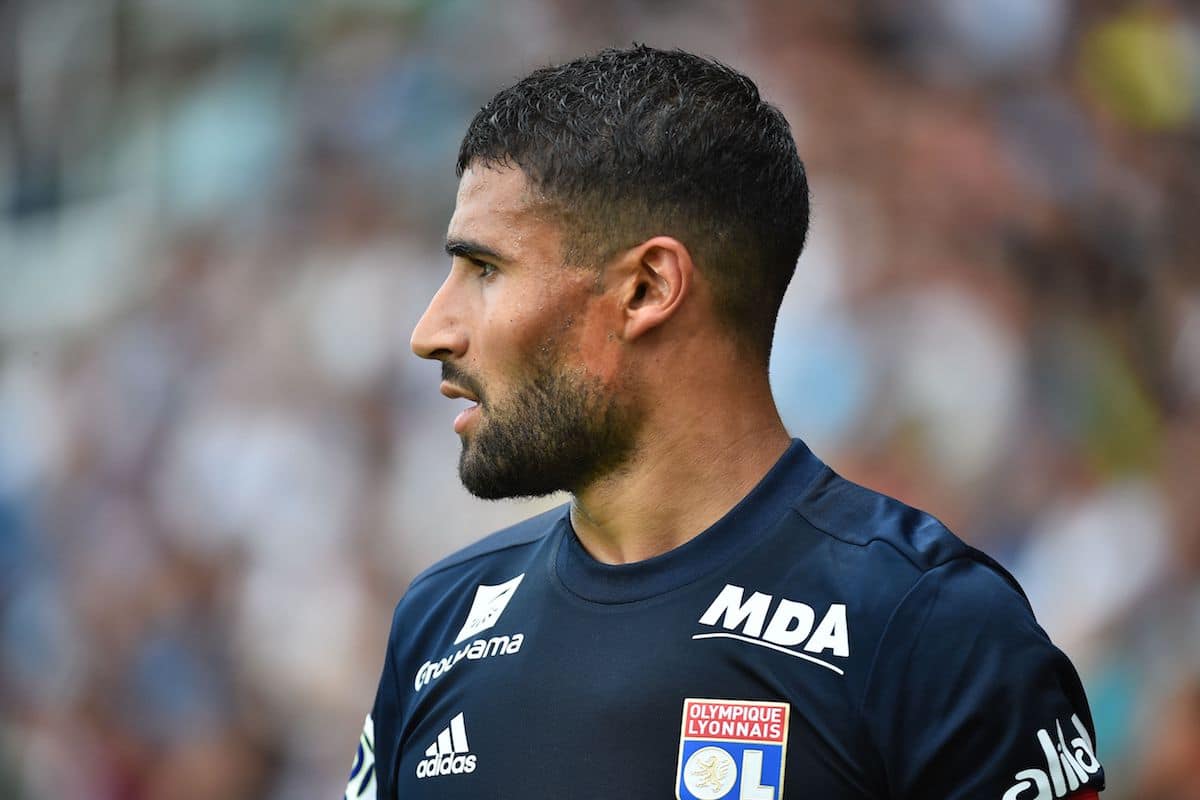 “There is such an expectation, a demand from Nabil, that one has the impression that has had an average season.”

Génésio does have a point. The belief that the former Arsenal transfer target could go on to become the best player in Ligue 1 brought an expectancy, one which could be difficult to live up to.

However, watching him in just five league games this year, there is a clear difference.

Two goals against Strasbourg kicked off the season; he followed that up with an assist in the 2-1 win over Rennes and then he scored in the 3-3 draw with Bordeaux – a goal that needs to be seen to be believed – and in the 2-1 win at home to Guingamp

That goal against the Breton side on Sunday showed his attacking instincts in the striker role. 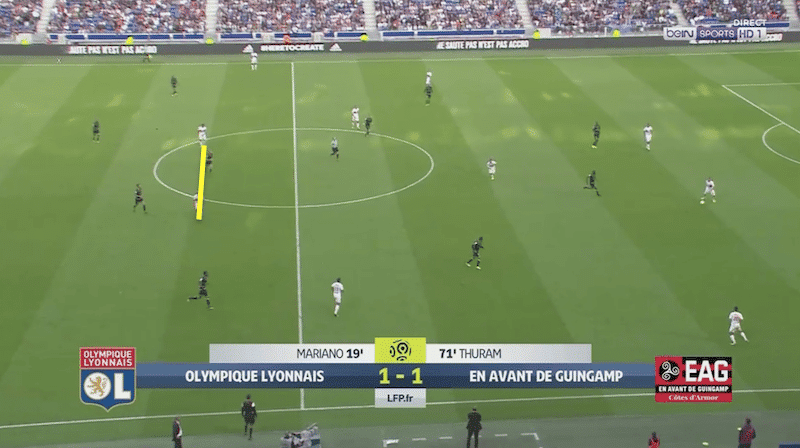 Antoine Kombouaré’s team had just equalised and Fekir was straight on the front foot. Playing up alongside Díaz, as soon as the Spaniard has the ball the 24-year-old is demanding to be played in. 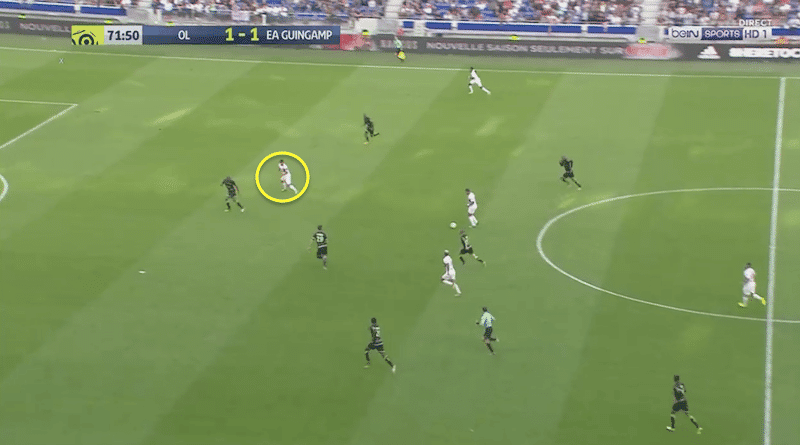 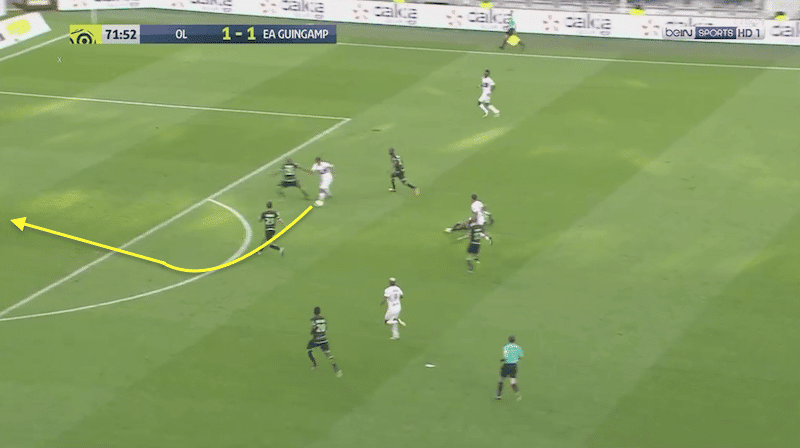 Receiving the ball on the edge of the box, Fekir’s superb first touch takes him inside one defender. He then beats a second before slamming home a left-footed finish.

Quick, incisive footwork, combined with a bullish pace on the ball, makes him deadly anywhere in the final third.

He’ll run at defenders, jink onto either foot and he has the acceleration to blow past opponents. But he also has his head up and can shoot from distance or slip in a team-mate.

“It’s not a new Fekir; it’s the Fekir we knew before his injury, but with more maturity,” said Génésio. “He’s our captain, he sets an example and leads the whole team with him.”

Last season, Fekir, once linked with a move to Liverpool, had to accommodate both Lacazette and Depay. And to do that he had to play on the wing. Lyon played 4-3-3 with the Dutchman on the left, Arsenal’s new signing through the middle and Fekir on the right.

“My mistake was to make him play on one side,” admits his coach. “ Repositioned through the middle, Fekir is showing his full ability. Ideal to convince Didier Deschamps to count on him in ten months for France in the World Cup.”

Centre-forward Díaz, the former Real Madrid player, could be the one that grabs all the glory with his goals, but it will be his partnership with Fekir that makes it happen.

Depay has started slowly and Traoré hasn’t quite found his place in the attack after impressing for Ajax, which his handed the spotlight back to the Frenchman.

Lyon take on Paris Saint-Germain on Sunday, giving the pretenders an early test.

It’s been far from a perfect start: the collapse and draw against Bordeaux showed their vulnerabilities. However, upset the free-scoring PSG and Génésio’s team will be seen in a different light.

Then their next target will be taking on Everton at Goodison Park. Lyon may have spent a lot of money this summer, but their whole business cost what the Toffees handed Swansea for Gylfi Sigurðsson.

This is what Aulas loves, though: causing upsets and proving that his team and their methods are better than the richer, more powerful clubs. That’s why the outspoken president loves taking on the Parisians and English clubs at the highest level.

“I do not want to sound like I am against the arrivals of great players like Neymar, who can make Ligue 1 extremely visible and positively impact the next television rights deal,” Aulas told JDD via L'Equipe. “However, this boost in attraction will not compensate for the loss of revenue related to our absence from the Champions League.

“If PSG, through disproportionate means, and Monaco keep confiscating the first two qualification berths, the other teams are excluded from the system of generating the most important sorts of revenue.

“It hurts those who are doing the best work. On top of that, these sorts of figures contribute towards a dangerous bubble.”

Aulas' words can only be justified when Lyon pick up the results on the pitch, both domestically and in Europe.

Born in Villeurbanne, just eight kilometres from the new Parc OL stadium, Fekir is the next homegrown product who is set to become the figurehead at the club, taking the mantle from Lacazette.

The form Fekir has shown this season is the best weapon Lyon have to challenge against all comers. If he can continue this vein and prove that it’s not just a flash of his 2015 form, then OL will be well-placed for a Champions League return, and the 24-year-old might still earn that place on the plane for Russia 2018.