Zinedine Zidane is bringing to light one of football’s great untold stories, the story of Real Madrid as a club built on the production and development of home-grown talent.

In his first full season as manager, the Frenchman has handed an important first team role to Nacho in the wake of injuries to multiple central defenders. He has also persisted with Dani Carvajal at right-back and brought Marco Asensio into the fold on the wing.

All three players are at completely different stages in their respective careers. At 27 years of age, Nacho is now proving that he has what it takes to play regularly at the highest level; Carvajal, at 25, is continuing to assert his status as one of the world’s finest full-backs; and Asensio, aged 21, is enjoying a truly formative campaign.

Their development and increasing importance goes against the general perception of Real Madrid as a football power intent only on pursuing other teams’ best players, spending extravagantly and assembling a lineup populated primarily by superstars. Though, in truth, this perception has always been historically inaccurate.

In fact, the club’s traditions have almost always seen a balance between international stars and locally developed talent.

Their astonishing five consecutive European Cup wins between 1955/56 and 1959/60 have often been solely associated with the immense talent and contributions of Alfredo Di Stéfano, Ferenc Puskás and Raymond Kopa. 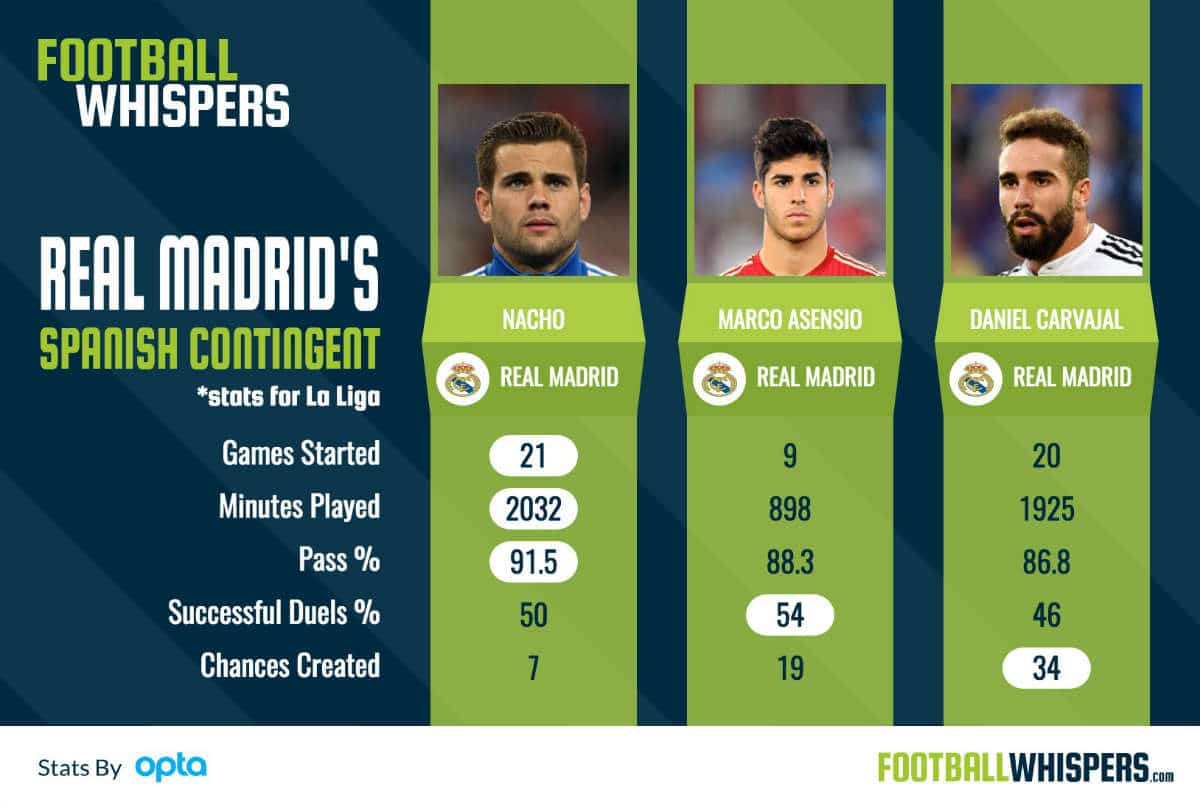 However, Francisco Gento, signed after just 14 appearances for Racing Santander at the age of 19, was also a key member of that great side. So too were the likes of José María Zárraga, Juan Santisteban and Enrique Mateos, all of whom came through the club’s youth academy.

In the second half of the 1980s, Real Madrid enjoyed arguably their greatest period of domestic dominance, winning five straight league titles, one Copa del Rey, and two Spanish Super Cups. At the heart of this team was a quintet of players known as La Quinta del Buitre: Emilio Butragueño, Michel, Miguel Pardeza, Manuel Sanchís and Rafael Martín Vázquez, all of whom were home-grown.

In the 2000s, however, Florentino Pérez’s presidencies obscured this aspect of the club’s history.

His Galacticos project, which entailed the signing of one star individual every season, gave rise to a new way of seeing Real Madrid, as Zidane, Luís Figo, Ronaldo and David Beckham joined. And this has been reinforced during Perez’s second term at the helm, during which he has brought in the likes of Cristiano Ronaldo, Kaká and Gareth Bale.

Ironically, the Galacticos period initially had a different, more apt moniker: Zidanes y Pavones (Zidanes and Pavones). The idea was that, for every star signed from another club, there would be one home-grown player, or for every Zidane, there would be a Francisco Pavón. This concept, however, was quickly forgotten, as were the Pavones themselves.

Barcelona, under the guidance of Pep Guardiola, took on a more progressive appearance at this point, with their side containing a number of players who had been nurtured in their renowned cantera, ‘La Masia’. This crop included Victor Valdés, Gerard Piqué, Sergio Busquets, Xavi, Andrés Iniesta, Pedro and Lionel Messi.

Yet, as the Catalan giants have shed this identity in more recent years, Real Madrid seem to have rediscovered their own roots.

Previously, the fruits of their academy tended to make their way elsewhere. Hence there is a sprawling diaspora of talent to have originally emerged in La Fabrica (the Factory) that takes in England, Spain, Portugal, Russia and France and includes Juan Mata, José Callejón, Borja Valero, Juanfran and Javi García. 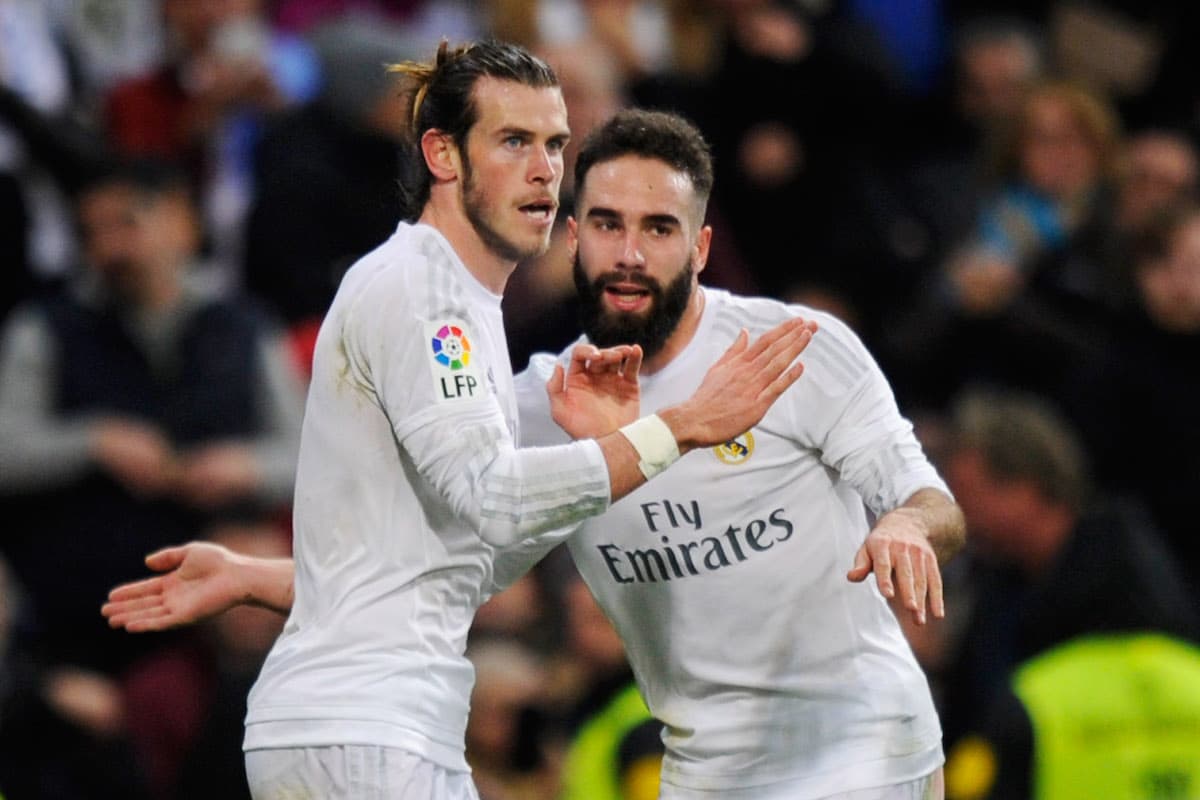 The right-back joined the club’s youth system at the age of 10, eventually featuring for the ‘B’ team before moving on to Bayer Leverkusen in the Bundesliga. But after just one impressive year in Germany, he returned to establish his place in Real Madrid’s starting lineup.

Nacho’s progress has been more gradual and circumstantial. Now entering his peak years, he has spent his entire career with the club without truly making an impact. That changed this season, however, following injuries to Pepe and Raphaël Varane.

Making 25 league appearances in La Liga and averaging 1.9 tackles and 1.8 interceptions per game, few have contributed defensively as reliably and consistently as he.

The same could be said of Carvajal, though the full-back has been just as vital in an attacking sense—only Toni Kroos, Sergio Ramos and Luka Modrić complete more passes per game than the 25-year-old, and only Kroos and James Rodríguez average more chances created.

Asensio, unlike the aforementioned duo, did not come through Real Madrid’s ‘factory’. Instead, he signed at the age of 18 after one-and-a-half seasons in the Segunda Division with Real Mallorca.

However, at 21 he has broken through into first team, competing with the likes of Rodríguez, Bale and Isco for regular game time and impressing with his smooth touch, sophisticated left foot, vision and creativity in and around the final third.

Asensio, Carvajal and Nacho are forming a promising Spanish core among Real Madrid’s Galacticos, reintroducing themes seen in the club’s past successes in the process. And they are being aided by other products of the youth system, namely pacey striker Álvaro Morata and versatile wide man Lucas Vázquez, who have contributed 22 goals in all competitions between them.

This appears to be a deliberate policy of Zidane’s. The Frenchman was the very definition of luxury, the truest of Galacticos as a player, however he also experienced the pitfalls of the Galactico project personally. Thus he has an innate understanding of the need for sustainability, with young and home-grown talent at the core.

In this respect, Real Madrid’s future looks bright. As well as the blossoming Nacho, Carvajal and Asensio, the club can call upon talented prospects currently on loan at other clubs.

Centre-back esús Vallejo has performed well on loan at Eintracht Frankfurt in Germany and, at 20 years of age, looks set for a recall next season. And 22-year-old orchestrator Marcos Llorente could re-join after a strong spell with Alavés to form the perfect midfield partnership with Casemiro.