One of the most interesting matches of this round in La Liga is the Real Sociedad vs Sevilla duel, so take a look at our preview of this game and our free betting tips we have prepared for you.

Our best predictions for Real Sociedad vs Sevilla

You can check out all La Liga predictions on our site, including our top betting tips for the Real Sociedad vs Sevilla game:

These two teams have both had a great last season, finishing fourth and fifth in the league. So, this should be a very close and exciting duel. That being said, Sevilla beat Real Sociedad in four of their last five meetings and while both teams have started this new season in good rhythm, our prediction for this match is for Sevilla to win, especially since Real Sociedad is dealing with a lot of injuries.

Four of the last five duels between Sevilla and Real Sociedad have gone over 2.5 total goals, while three of those four matches have also gone over 4.5 total goals. So, it's obvious that these two teams play high-scoring games whenever they meet, regardless of their current forms and other things. With the odds on this bet being 11/10, we feel it's a great value bet to try out.

Similar to our previous prediction, both teams scoring in this match also comes with very good odds of 41/50. Given the fact that both teams scored in four of the last five head-to-head duels between Real Sociedad and Sevilla, this bet sounds great, especially since both teams scored twice in three of those four meetings.

The best odds and helpful stats for Real Sociedad vs Sevilla

If you are looking for the latest stats and top odds for the Real Sociedad vs Sevilla game, check them out right here:

Finishing fifth in La Liga and winning the Copa del Rey last season was a fantastic experience for all Real Sociedad fans, but the team is keen to keep growing. So, it's not a surprise that Real Sociedad started the new La Liga season with three wins and one loss, which came at the hands of Barcelona. Real Sociedad also drew with PSV in Eindhoven in their Europa League debut earlier this week. However, Real Sociedad has a lot of problems with injuries since they have eight players on their injury list, including big names like David Silva and Monreal.

After the first three games in the new La Liga season, Sevilla has two wins and one draw. In the meantime, they also drew with Red Bull Salzburg in their first game in the Champions League over the week. Overall, Sevilla has had a great start to the new season and now they have a chance to get a big win in San Sebastian against a good team struggling with injuries since Sevilla has no injured players at the moment.

The usual questions for Real Sociedad vs Sevilla 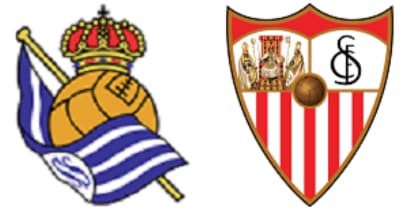