You've come to the right place for free Real Madrid vs Valencia tips and predictions. We've got the latest info about both teams and the next big match coming up in February 2021.

There aren't any odds available for the next Real Madrid vs. Valencia match because it is scheduled to be on the 14th of February, 2021, which is a couple of weeks away. It is still early, and most bookmakers would post their odds on the event later as we near the date. We will keep you posted on any new developments on the odds front and display which bookies would provide the highest odds for the top markets. In the rest of the article, we will give you our predictions for the top selections and our reasons for choosing them.

Remember odds are subject to change – check your bets before confirming 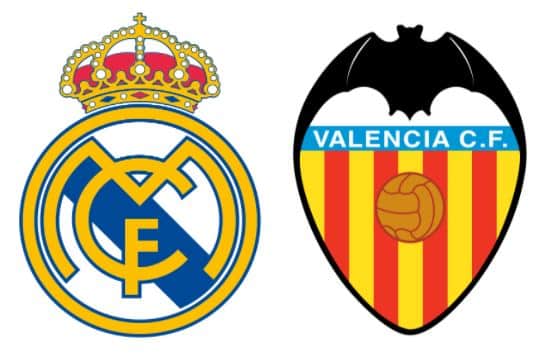 Real Madrid has always been one of the top teams in Spanish football, and that's why they have been dominating the La Liga for many years. Until the time of writing, the club won all of their matches in La Liga and the UEFA Champions League except their game against Shakhtar Donetsk.

Most of their goals were scored by French striker Karim Benzema, and they have other great players to rely on, such as Vinícius Júnior, Sergio Ramos, Nacho, and Marcelo. Recently Eden Hazard and Luka Jović both got hamstring injuries, and they wouldn't be able to play until the end of December. However, since Real Madrid won't play Valencia until February 2021, they still have time to heal and get back into form. One of their attacking midfielders – Martin Ødegaard, injured his knee, and their striker Mariano Diaz got a muscle contusion.

It isn't known when they will be able to play again. Even without them, Los Blancos have a significant chance to beat Valencia when they meet in February, mostly because the match will be played on their home turf – Santiago Bernabéu stadium.

Valencia has been a top La Liga team for many years, and although they don't have as many titles and honours as Real Madrid, they still have a solid squad and form. During the last month, most of their matches ended in a draw. But we have to mention that when they played against Real Madrid at the beginning of November, Carlos Soler shined and scored three of Valencia's four goals and thus won the match. If the squad can perform as well as they did in the last game between them and Real Madrid, then there is a high probability that they can win again.

For their next showdown in February 2021, there won't be any significant changes because their injured players (Lee Kang-In, Gayà, and K. Gameiro) would be coming back to train after the New Year. As long as there aren't any significant injuries in the future, Valencia has a decent chance to win against Real Madrid again or end the match in a draw.

Our Top Free Tips on Valencia vs. Real Madrid

Here are our top La Liga tips for the match in February between Real Madrid and Valencia. Keep in mind that the odds aren’t posted yet, so we will only give you our predictions on the selections and tell you why we think so.

Predicting who will win a match is the oldest and most popular type of betting market in sports betting. We believe that Real Madrid has better chances of winning in February because they have the better squad, but Valencia will fight until the end. Although Los Murciélagos have an opportunity to snatch the win, especially if we take into consideration their last match, but overall, the statistics point to Real Madrid as a winner in February.

Based on past matches between the two teams and overall scoring by both clubs recently, we think that there will be at least two goals scored in the game, so betting on the “Over 1.5 Goals” market is the right choice. If you feel more intuitive, you may even use the Bet Builder feature to combine this selection with first/last/anytime goalscorer markets and try your luck.

Both Teams to Score in the Game – Yes

Real Madrid and Valencia have some bright strikers on their squads, and we believe there is a high probability that both teams will score in the next match between them. If you include this selection in an ACCA or a Bet Builder wager, you might even increase your payout potential if you are right about the other selections.