The draw for the Champions League semi-finals has been made, and it has thrown up some fascinating tactical battles to look forward to.

We at Football Whispers have analysed both ties.

Here, we look at Real Madrid versus Atlético Madrid.

The two Madrid sides know each other well not only from their domestic meetings, but Champions League final clashes in 2014 and 2016.

On both occasions Real Madrid won, however the fact this match-up will be taking place over two legs, with the second leg taking place at Atlético’s Vicente Calderón Stadium, adds another layer of intrigue.

For the third time in four years, Atlético Madrid find themselves in the last four of the Champions League.

Diego Simeone’s side have become the knockout kings of European football, and this is due primarily to their unerring ability to relentlessly grind through one-off ties. 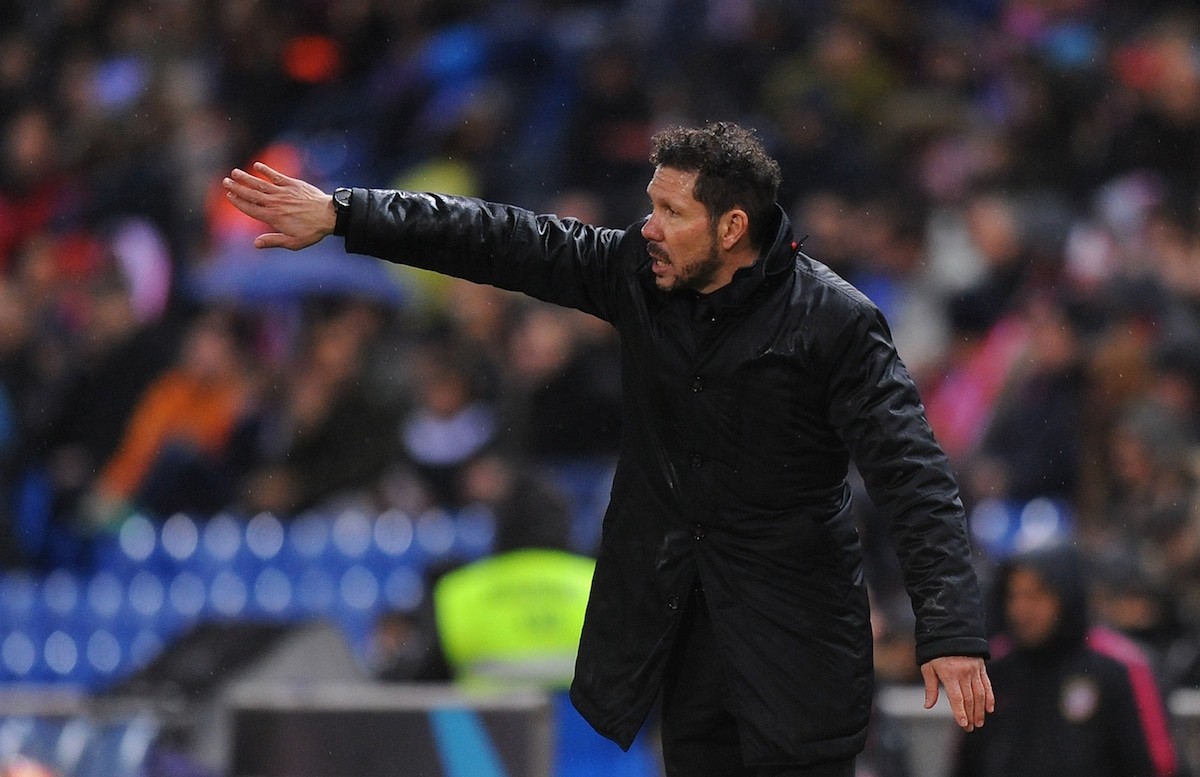 Having conceded just 24 goals in 32 LaLiga games this season, no other Spanish side can match their defensive record.

While they are perhaps more aggressive than they used to be, Simeone’s side are still incredibly comfortable when defending deep.

They do so with cohesive positional coverage, meaning that instead of going man-to-man they defend zonally, with each player moving in accordance to their team-mates.

This coverage is performed in a rough 4-4-2 structure with excellent compactness.

This makes it difficult for opponents to penetrate Atlético’s defensive block, as there is often little space both between the lines of midfield and defence and between each player in Atlético’s midfield four.

An example of this can be seen in the graphic below, taken from their clash with city rivals Real Madrid. 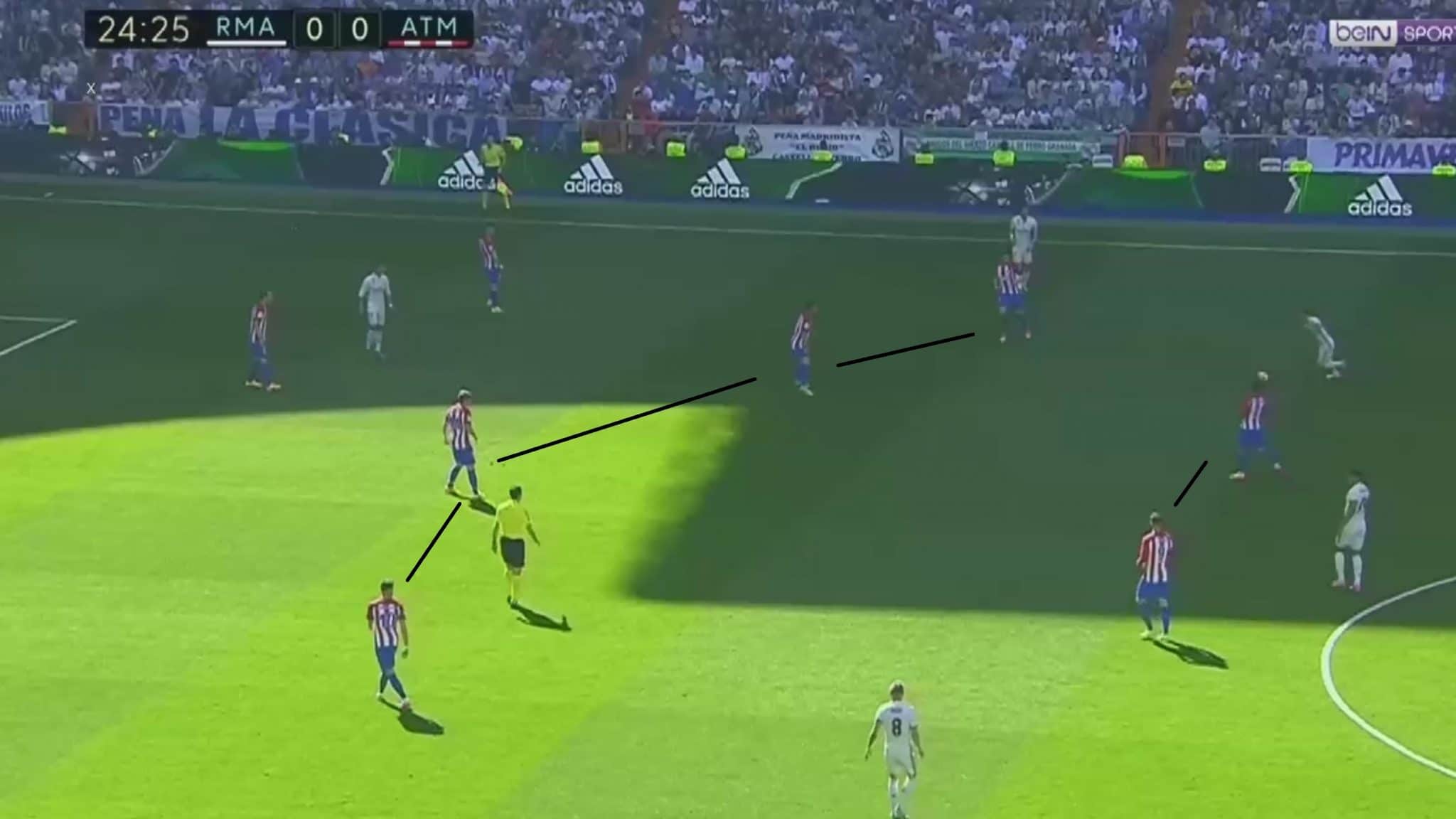 This forces Real Madrid to play a diagonal ball out to the left wing as they could not penetrate centrally.

As suggested above, however, Simeone’s men are capable when it comes to defending from the front, and they can put an attacking press on their opposition effectively when necessary in order to disrupt their build-up.

Atlético are also a fast counter-pressing side—when they give up possession in the final third, they will often look to immediately cover their opposition ball-player’s passing options in order to force an instant turnover.

Atletico’s compact shape extends into their attacking style, meaning they are also able to build co-ordinated attacking moves of their own.

With short distances between their midfielders, namely Koke, Gabi and Saúl Ñíguez, they are able to retain possession comfortably while drawing their opposition in and freeing up space behind for star attacker Manchester United transfer target Antoine Griezmann to exploit.

For a former galáctico, Zinédine Zidane’s tactical philosophy since taking the reins at Real Madrid has been impressively pragmatic.

The Frenchman, learning vital lessons from the club’s recent past, has worked to imbue the team with an increased defensive solidarity.

No longer are Real Madrid solely reliant on what happens when they have possession in and around the final third; now, they also maintain a sound defensive shape and are more difficult to break down than before.

The introduction of Brazilian defensive midfielder Casemiro – perhaps inspired by Zidane’s own experiences as a player following Real Madrid’s infamously short-sighted decision to sell Claude Makélélé – has brought greater stability to the three-man midfield. Casemiro probes, tackles and intercepts in front of the back line, allowing Toni Kroos and Luka Modrić to cut off the half-spaces (the spaces between each wing and the centre of the pitch) or, on occasion, man-mark the opposition’s central midfielders.

Zidane’s side are quite passive defensively, tending not to press the opposition’s own back line in their build-up. 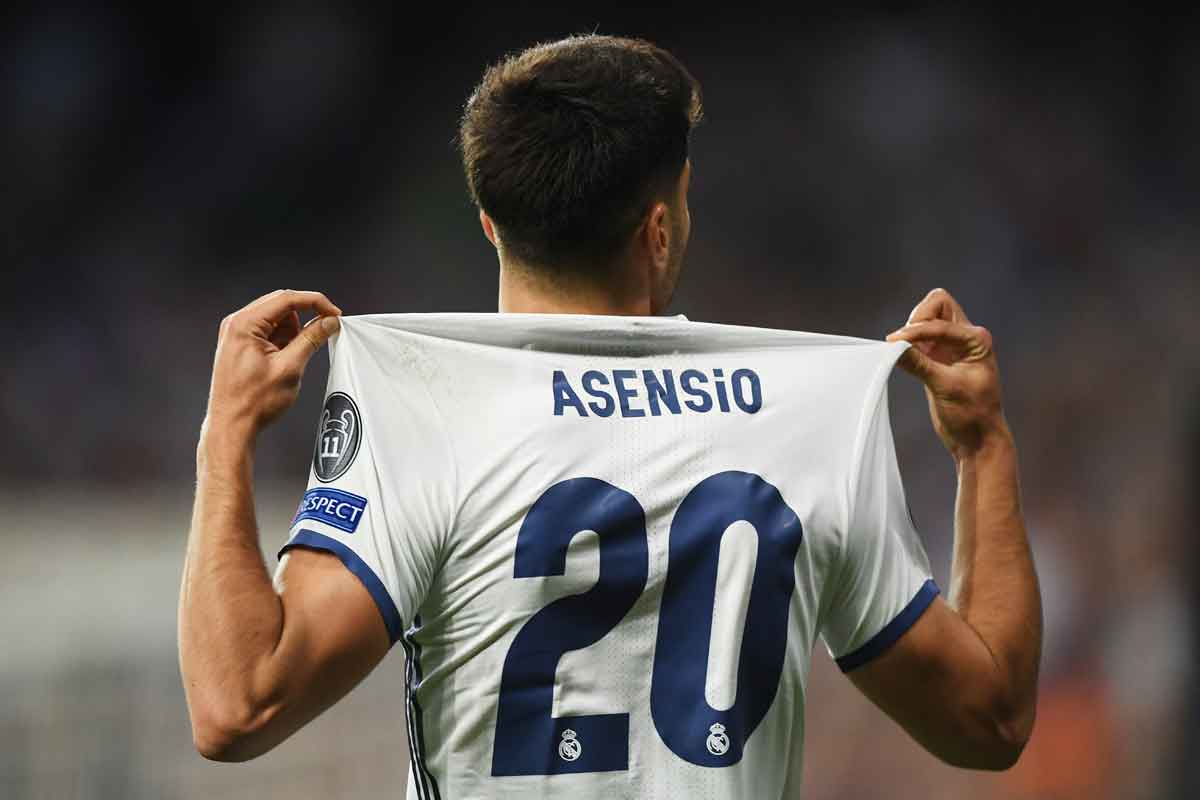 Their rough 4-3-3 shape can become more of a 4-4-2 in defence, with Cristiano Ronaldo given the freedom to remain up front and drift alongside Karim Benzema.

The right winger, be it Gareth Bale, Isco, James Rodríguez or Marco Asensio, will be tasked with tracking back, however.

A swift counter-attacking side, Real Madrid do not waste time when winning the ball back and will look to release their pacy attacking players into space as quickly as possible.

This will be particularly crucial against a solid defensive side such as Atlético, who once established are hard to pass through.

However, while their counter-attacks are reasonably well co-ordinated, Real Madrid’s attacking play is not always the most efficient.

Ronaldo prefers to linger in and around the opposition penalty box and look for shooting chances, meaning left-back Marcelo is responsible for providing much of the width down the left flank.

An example of this is depicted below. 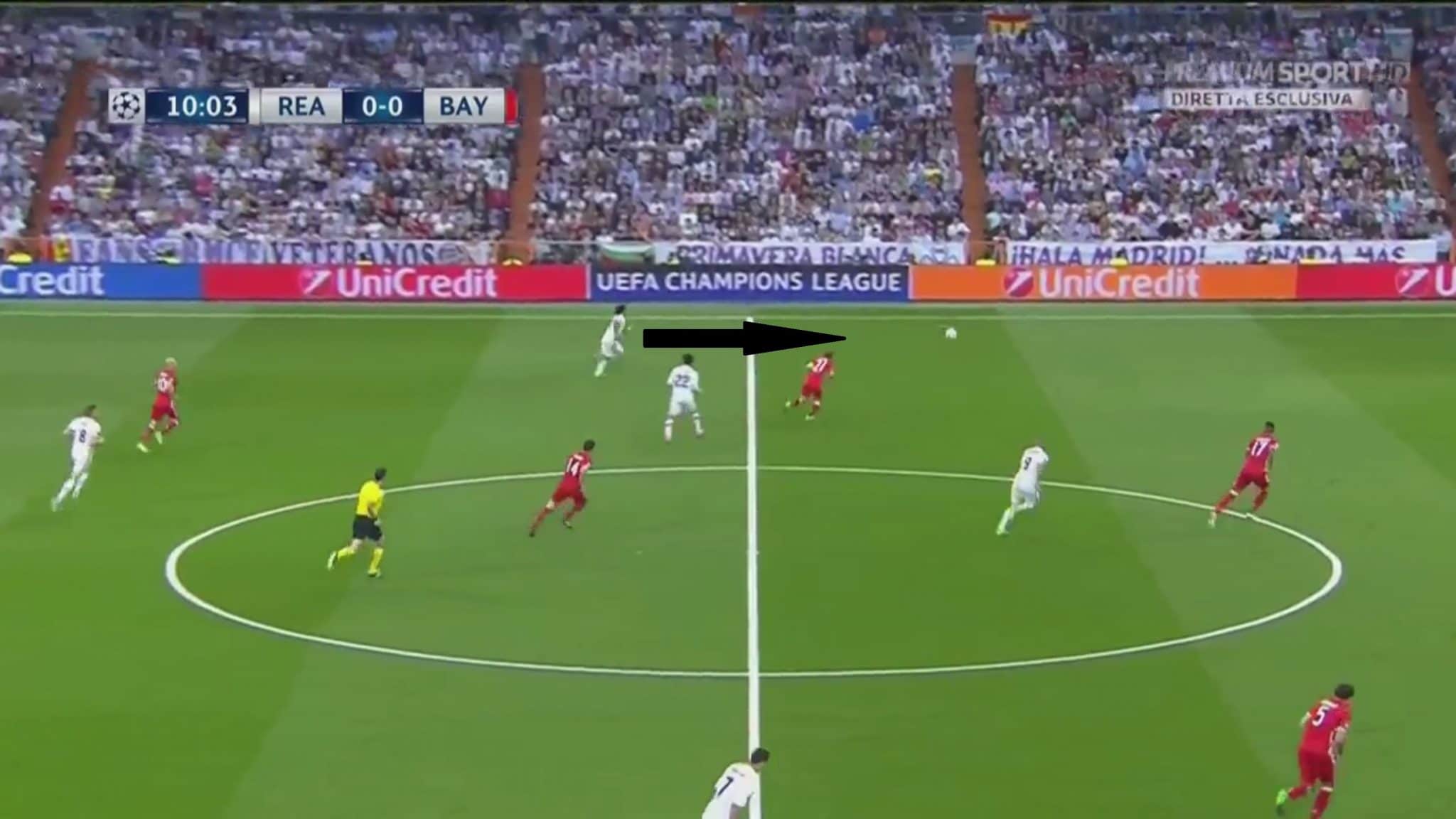 Casemiro covers for this, almost forming a back three with Sergio Ramos and one of Nacho, Pepe or Raphaël Varane, but there can sometimes be a lack of movement or positional rotation off the ball, leading to simple crosses from out wide.

One aspect of Real Madrid’s play that Atlético would be wise to pay specific attention to would be their corner and free-kick routines.

Indeed, with multiple aerial threats such as Ramos and Ronaldo, no other La Liga side has scored more than Real’s 19 goals from set pieces this season.

In last season’s Champions League final, Zidane surprised many by instructing his side to play a defensive game, forcing Atletico to have possession and therefore reducing the impact of Simeone’s side’s strength in the defensive phase. 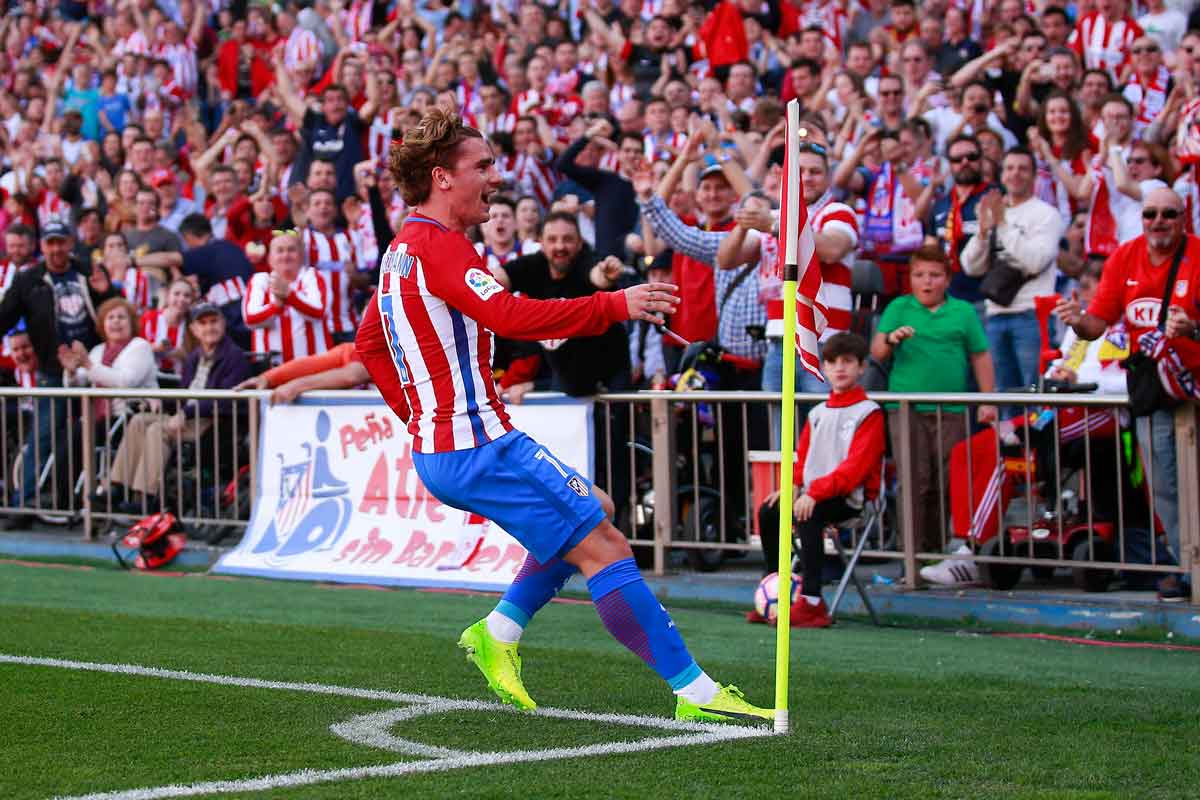 This may not be quite such a good policy over a two-legged affair, however.

Zidane’s deployment of Casemiro will be interesting for this clash, though.

The defensive midfielder may be tasked with shadowing Griezmann, blocking any passes through to the French forward or man-marking him attentively.

Real Madrid may not be so defensive this time around, but if Casemiro can neuter Griezmann they will set themselves up well for progress to the final once again.