There has been a lot of talk this summer about a possible Álvaro Morata departure from Real Madrid.

The striker is thought to be a Chelsea transfer target, with a report in The Sun today claiming Blues boss Antonio Conte has instructed the hierarchy at Stamford Bridge to go all out for the £65million-rated Spaniard.

And with the 24-year-old failing to dislodge Karim Benzema this season, it seems like a move away from the Estadio Santiago Bernabéu will happen, despite the Spain international turning down a move to China according to Marca.

But that may not be the wisest move from the Real Madrid hierarchy.

Benzema vs Morata: The stats

Since Benzema’s arrival at Real Madrid, only one season (his first) has seen him get a lower goalscoring return than the current campaign.

He scored just nine goals in all competitions (eight in the league) in the 2009/10 season, getting 20 or more goals in every other season, except for this, where he has 17 (nine in the league).

And if you look at goalscoring in LaLiga, Morata has definitely overtaken the Frenchman. 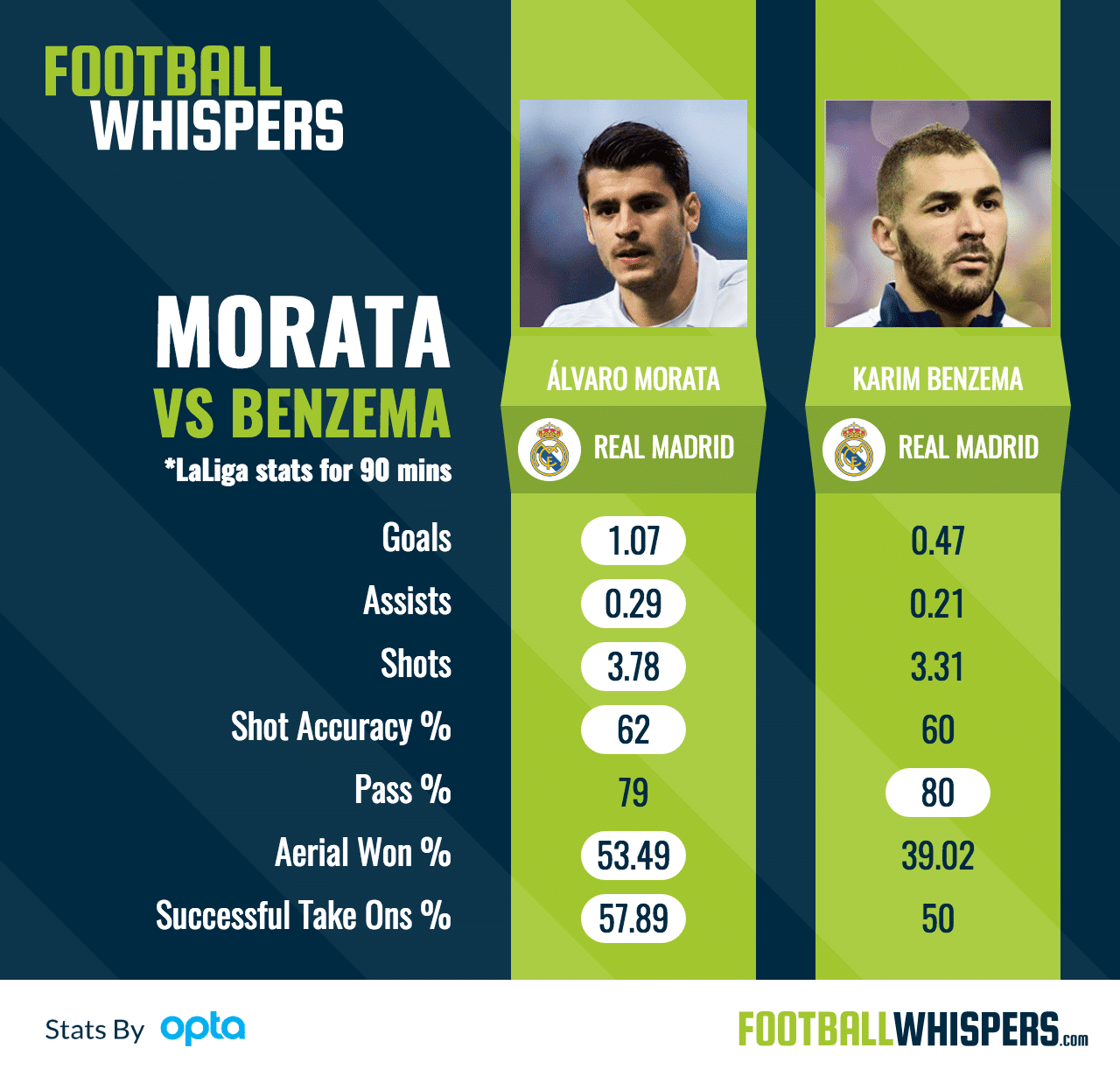 READ MORE: Karim Benzema: Failure Or One Of Real Madrid's Greatest Ever Players?

He has hit the back of the net on 15 different occasions, despite playing just 1263 minutes.

By contrast, Benzema has been on the pitch in the league for 1741 minutes, working out at 0.47 goals per 90 minutes.

While they both have made the same number of assists this season – four – the Spaniard playing less this season means per 90 minutes, his record is more impressive, averaging 0.29 compared to 0.21.

He does come out on top, just, in terms of pass accuracy – 80 per cent to 79 per cent – but that’s a rare occurrence in the LaLiga statistics we’ve seen.

Real Madrid are one of the best teams around and scoring headers at crucial times, and with Morata winning more than half of his aerial duels (53.49 per cent), he would surely offer more in that department than Benzema when you see he has only won 39.02 per cent of his this season.

And it’s not even a good sign for the Frenchman in terms of successful take-ons, trailing his teammate, by completing 50 per cent compared to 57.89 per cent.

Different stages of their careers

But it isn’t just the league statistics that mean it would be better for Madrid to keep Morata instead of Benzema.

Age has to come into consideration here.

The Spaniard has his whole career ahead of him still, while Benzema will shortly be on the decline – perhaps his statistics this season with the drop off in goals suggests he already is.

Of course Benzema has a connection with Madrid that may make Zinédine Zidane reluctant to part with his compatriot.

His 179 goals places him in eighth on their all-time goalscorers list.

Another four would take him above Francisco Gento, and only three players have scored more European goals for Los Blancos.

One of those players is Cristiano Ronaldo, and given that most of Benzema’s career in the Spanish capital has been in the shadow of the Portuguese superstar, it’s a great achievement. 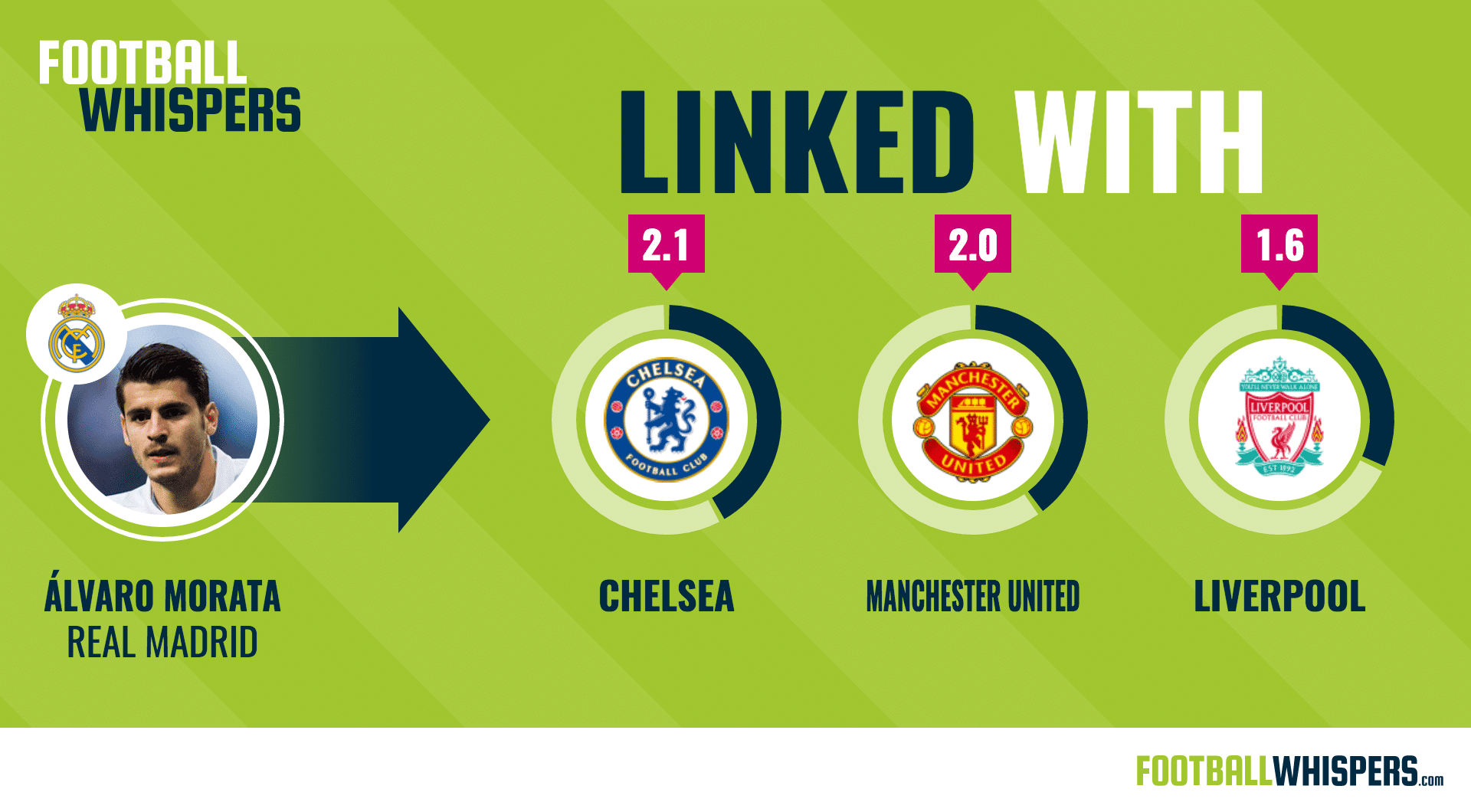 READ MORE: ÁLVARO MORATA AND CHELSEA COULD BE THE PERFECT MATCH

But Morata could well and truly be the future.

His goalscoring record suggests given a chance, he could become a potent threat in LaLiga.

And surely making a player who has come up through the ranks at Madrid would be a good move for fans.

While they may feel a connection to Benzema, there is always a special bond beyond players who have come through the youth system and the supporters, and that is exactly what Morata has done.

Granted, he may not be the next Raúl, but with a talented Spanish core being build at the Bernabéu with the likes of Marco Asensio, Marcos Llorente and Jesús Vallejo seemingly forming part of the plans for the future, alongside the likes of Sergio Ramos, Nacho and Dani Carvajal, as well as Real Madrid transfer target David De Gea, you would think Morata fits more with Los Blancos’ philosophy for the future than Benzema.

And he could well find himself saving Madrid a lot of money in the future when they look for a future galáctico striker, even though it would be hard to turn down a £65million bid from the likes of Chelsea.