Ask the majority of historians about eras and you’ll rarely get a satisfactory answer. For instance, the Industrial Revolution wasn’t much of a revolution and centuries aren’t really centuries, they’re ‘long centuries’.

Yet even the most contrary of historians would struggle to argue that the summer of 2018 didn’t represent an end of an era for Real Madrid.

Los Blancos were hit with a double-whammy. They lost inspirational manager Zinedine Zidane, who stepped down after two-and-a-half trophy-laden seasons, and one of the best players in world football; Cristiano Ronaldo, who departed for a new challenge at Juventus.

But, two months into the season, Los Blancos look somewhat lost. They sit fourth in La Liga and are second in their Champions League group. More worrying though is that they haven’t scored, let alone won, in four matches.

So are Madrid really in trouble?

Let’s assuage a few worries before delving deeper. Real Madrid might be fourth, level on 14 points with Espanyol and Alavés, but their underlying statistics make for more pleasant reading.

If you simulate each of their La Liga matches thousands of times based on the shots taken – rather than seeing who wins in a single game – you can get an ‘expected points’ value.

In this table Madrid sit second, just ahead of Sevilla in third and a more comfortable distance away from the rest of the pack.

All teams and players go through periods of good and bad luck, hot and cold streaks. And it could just be that one of these cold streaks has coincided with the new era at the Santiago Bernabéu.

The change in style under Lopetegui to a more possession-based game also magnifies any problems. After the high-power, high-octane football of Zidane’s reign, Lopetegui has added 100 passes per match to his Madrid side.

Possession-based football can have tremendous results but if it’s not going well then it can very easily wind fans up.

Some cause for concern…

There are genuine reasons for disquiet though.

In hindsight, failing to replace the shot production of Ronaldo was an odd move. And it wasn’t that Madrid replaced badly, they chose not to replace at all.

Last season Ronaldo produced 0.92 expected goals per 90 minutes. He was the team’s biggest producer of xG across the year. In 2018/19 that role has been taken up by Gareth Bale.

Bale, however, is only producing 0.47 expected goals per 90 minutes, almost half as much. The same is also true for their touches inside the opposition box (10.13 vs 5.51 per 90 minutes).

Part of the reason for the lower expected goals value Bale is registering comes from where he’s taking his shots. 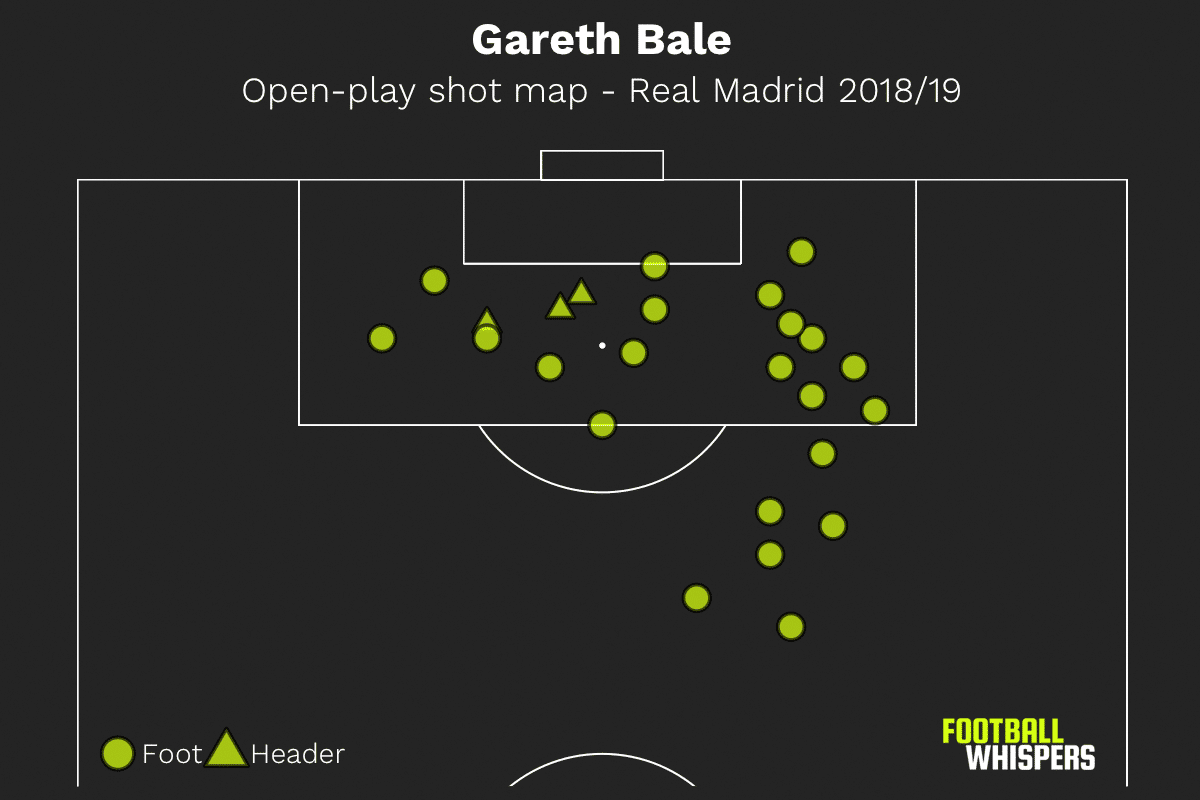 The Wales star has been playing on the right flank under Lopetegui and his shot map reads like a left-footer cutting inside and firing efforts on goal at any opportunity.

Ronaldo’s shot maps have always been a little wayward too, but he balances his more inadvisable attempts with plenty of high-quality chances. 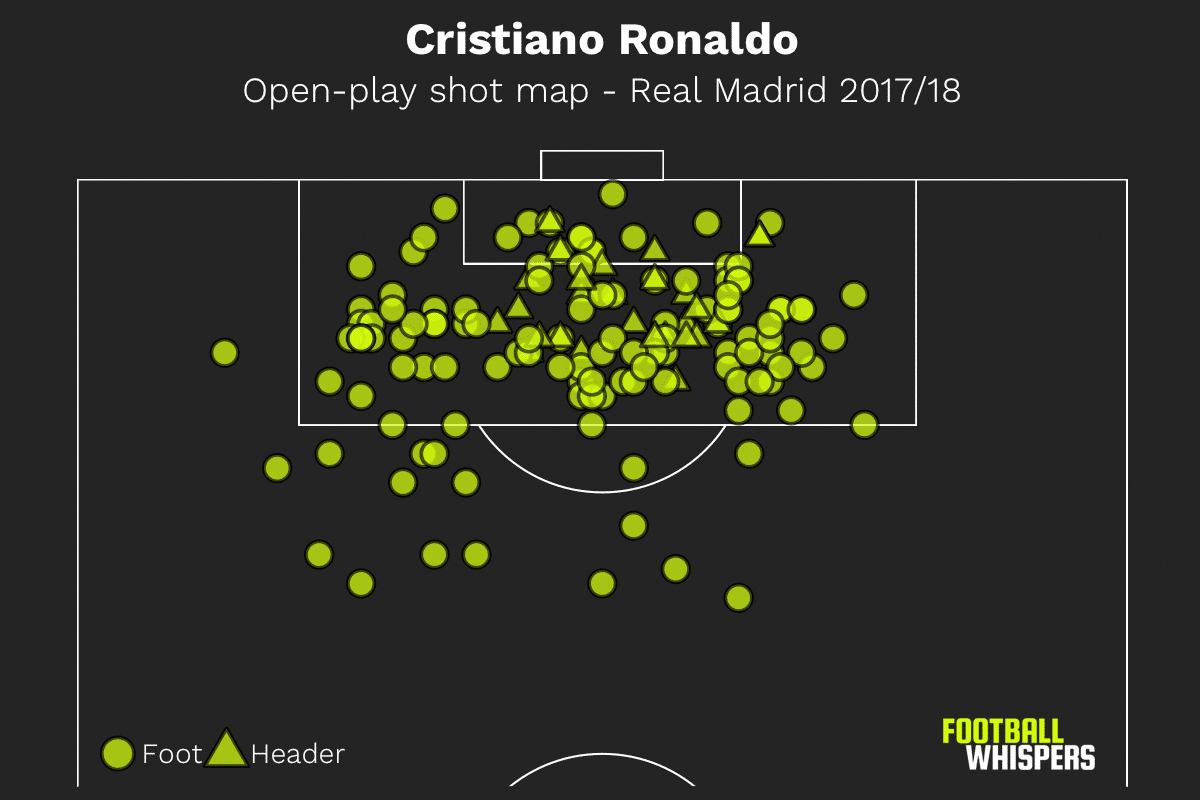 Some thought that perhaps Karim Benzema would be unleashed by Ronaldo’s departure, freed from having to be subservient to his talent and ego.

This hasn’t happened. In fact, Benzema is taking fewer shots than last season and his touches inside the opposition box have almost halved. He has scored four league goals, one of which was a penalty, compared to his five for the entirety of last season but this is papering over cracks.

His shot map is sparse and the proportion of his shots coming from around eighteen yards out is slightly concerning, although this makes you wonder about the service he's getting. 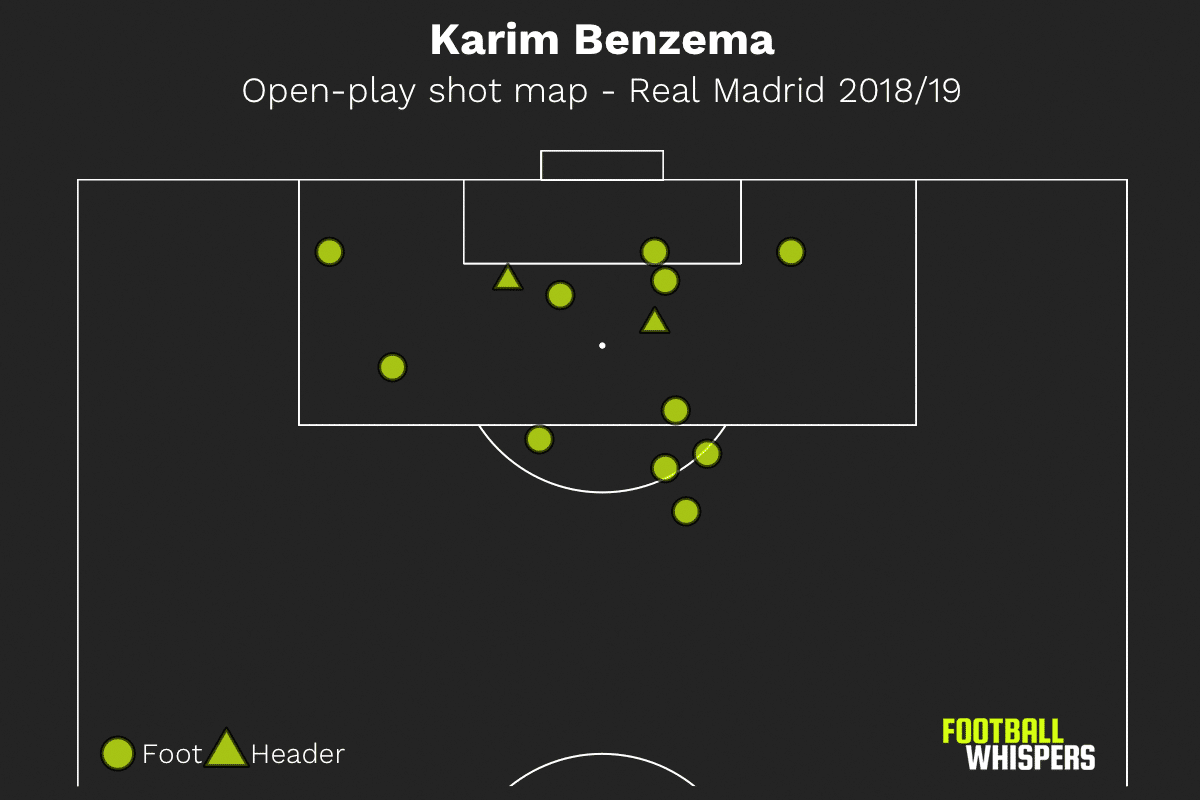 Elsewhere in the squad, Marco Asensio and Isco are picking up some of the attacking slack, but that’s about it. Sergio Ramos is the sixth-highest expected goals contributor in the squad, after the four already mentioned and summer recruit Mariano.

Four in a row? No chance

The fact Real Madrid won three Champions League trophies in a row prior to this new era makes the change even more stark, from a story point of view at least.

For three years, Los Blancos were the dominant team on the European stage. With Luka Modrić and Toni Kroos in midfield, Ramos and Raphaël Varane in defence, as well as their attacking talents, it almost seemed like this was the Galacticos project done right.

At the moment, despite being fourth, Madrid might still be good enough to dominate La Liga and challenge for domestic trophies with Barcelona, but they no longer look like a team who can maintain their hold on the entire continent.