Seventh in the table, as close to 14th as they are to fifth: on the face of it, there's nothing particularly special about this Real Betis side. They concede more than they score (33 for, 36 against) and they do not possess any high-profile, marketable marquee stars, at least not in the conventional sense.

Yet this Betis side are a uniquely fascinating beast. Only those who have not seen them play this season, not heard or read of the drama and entertainment offered on a fortnightly basis at the Estadio Benito Villamarín in Seville, would assume there isn't anything out of the ordinary about Quique Setién's men.

To anyone who has witnessed Los Verdiblancos in all their glory (and sometimes despair) this term, they have become appointment viewing. Whether it is their swashbuckling attacking style, their defensive ineptitude, their wily veterans and journeymen, or their highly impressive cast of youngsters, there is something in this Betis team for everyone.

Going forward, they flow, with carefully curated build-up, dynamic wing play and incision through midfield. At the back, they are far less assured, conceding more goals than any team outside La Liga's relegation zone, and shipping the joint-most set-piece goals in the division (eight) so far this season – although they managed to shut out Real Madrid out at the Bernabéu when they beat the European champions 1-0 in September.

This all makes for an awful lot of fun. On average, a La Liga game involving Betis this season has seen 3.63 goals scored, more than any other side in the Spanish top flight. They don't always come out on as victors – in fact they've only won eight of there 19 league games to date, losing the same number – but a Betis game is often a treat for the neutrals.

The recent derby against Sevilla at the Ramón Sánchez Pizjuan was a case in point. This time, however, Betis did manage to claim all three points, edging arguably the most entertaining game in Europe this season 5-3, the first time they have ever notched a mañita (little hand, meaning a five-goal haul) on the home turf of their cross-city rivals.

Fired in front by impressive 21-year-old playmaker Fabián Ruiz with little more than 20 seconds on the clock, Betis started as they meant to go on. Sevilla twice fought back to level the game and brought the tie within one goal in the second half after Sergio León had put the away side two up. But as Vincenzo Montella's men pushed for an equaliser deep into stoppage time, former Barcelona winger Cristian Tello broke away to seal the deal.

This wasn't the first eight-goal thriller Betis had been involved in this season, though: they drew 4-4 with Real Sociedad earlier in the campaign and had the smaller share of nine in a 6-3 defeat to high-flying Valencia. The derby was, however, by far the sweetest for Béticos.

The man behind this thrilling method of play espoused on the green and white side of Seville is manager Setién. The 59-year-old former Atlético Madrid player took charge at the Benito Villamarín in the summer have earned plaudits for his work in not only guiding Las Palmas away from the relegation zone, but by doing so with an attractive juego de posición (positional play) style of football.

Setién is the ultimate idealist: he has admitted he'd sooner resign from his post than opt for a more pragmatic approach that prized results above playing his way.

In an interview with ESPN in December, Setién explained how this came to bear at Las Palmas when results took a turn for the worse in the second half of last season: “There was a point where I said either things are done this way or I'm going, because otherwise this will end and it will ruin it all. Get another manager, no problem, thanks. I'm going.”

Playing out from the back, circulating possession through midfield and creating and exploiting overloads are the basic tenets of Setién's style; Betis at their best are reminiscent of Pep Guardiola's sides, although, without the same quality of players at the Catalan's command, consistency is hard to come by.

The assassin in a jester's garb 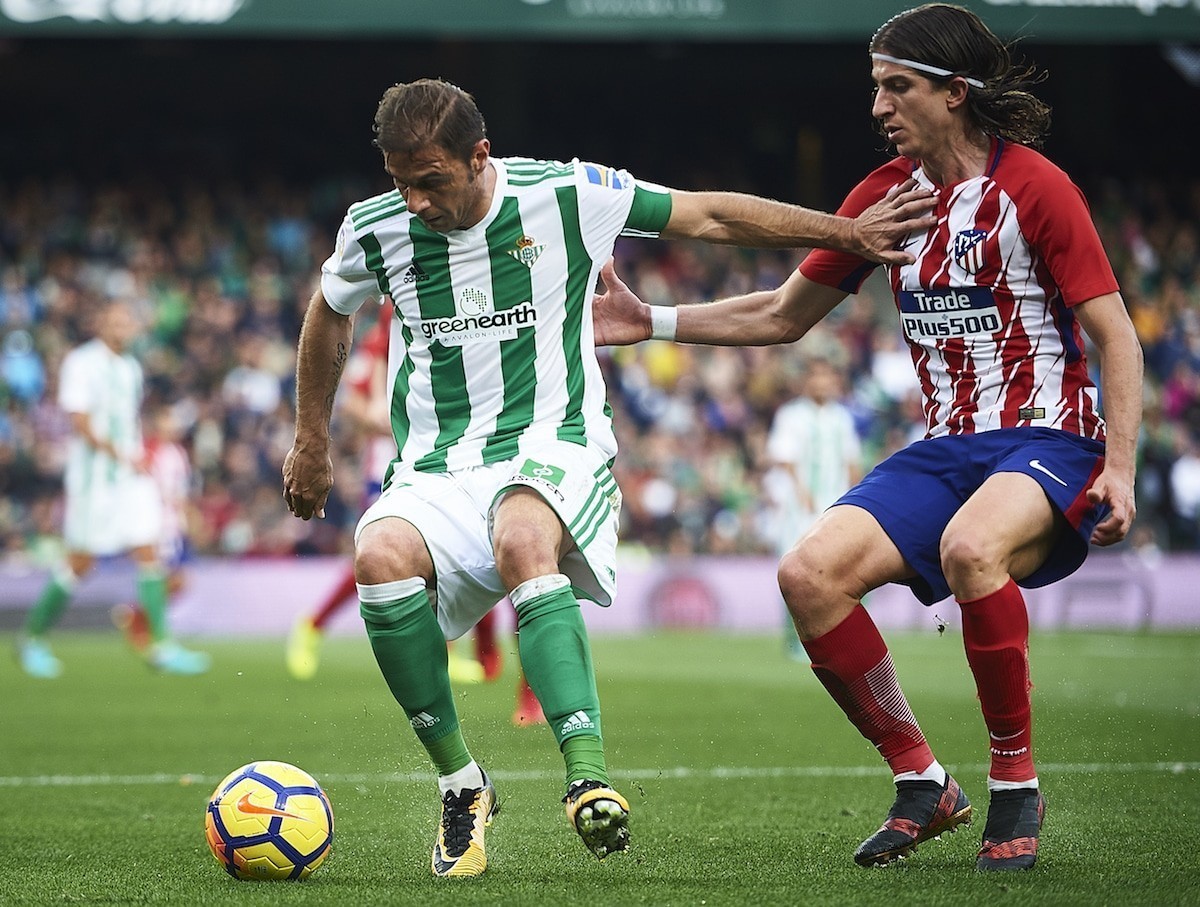 “There will be no rest tonight,” Betis captain Joaquín said after the Sevilla win. “Anyone who gets home before five in the morning gets fined.” The 36-year-old winger, in his second spell with Betis, is renowned for his sense of humour; he is the dressing room prankster of the Verdiblancos.

It has been almost 18 years his debut for the club, emerging from the youth ranks as a prodigious dribbler destined for stardom, promoted from the B team to the senior side as a teenager in 2000. Once a Manchester United transfer target, Joaquín is a veteran of two World Cups with Spain and was part of an iconic Betis side in the early- to mid-2000s which included the likes of Denilson, Marcos Assunção, Capi and Alfonso.

The Spanish wide man won the Copa del Rey with his hometown club in 2005 before departing for Valencia the following year. Spells with Los Che, Málaga and Fiorentina saw Joaquín fall just short of his early promise, and he returned to Betis in 2015, where, despite his advancing years, he is a key figure and a hero on the terraces.

Don't be fooled by his jovial exterior, Joaquín remains direct and dynamic threat down the flanks, evidenced by the way he lashed home a breakaway goal in a recent 3-2 win over Leganés.

On an individual level, their most recognisable name might be beyond his prime, but Betis still boast an enticing cast of performers, from young upstart Fabían to journeyman forward Sergio León, the Barça-schooled duo of Tello and Antonio Sanabria and veterans Andrés Guardado and Rubén Castro.

As a team, they come together to form a fascinating blend of guile and ingenuity, while remaining endearingly flawed.

This Betis side are a special team who, by ordinary measures, may not achieve special things. But whatever they do, however far they go, savour them, enjoy them. Always watch Betis.