Reading are treading awfully close to the drop zone right now and the teams beneath them aren't giving up on their fight to close the gap. Can the Royals grab three points here as they entertain Stoke? Find out with our Reading vs Stoke match preview with free tips, predictions and odds mentioned along the way.

If there is one thing you could say about both of these teams it's that they don't win enough games. With that in mind, we see this one ending level. Reading have drawn two of their last three matches whilst Stoke have drawn two of their last five. On top of Stoke's couple of aforementioned draws you could also point out their shoddy away record that sees them winless in eight. Finally, a look to their head to head hardly gives any indication of one side dominating; three of the last five have ended in draws.

It could be a turgid watch

Reading are slumped down near the bottom of the league with Stoke not doing much of note either; it's hardly set up to be a classic from that mini preview and we foresee a game lacking goals. Reading have gone under 2.5 goals in each of their last three matches and in four of their last five. Stoke meanwhile have fallen under the 2.5 mark in three of their last five games with their season average standing at just 2.4. Three of the last five head to heads have come up short of three goals too.

Here are the key stats & form guide for Reading vs Stoke

Reading vs Stoke: Let's look at the predicted lineups

Stoke's season might not have gone to plan but Reading are an example of how things could be worse – much worse. Not only have Reading suffered from off the field issues but they've been far from ‘at it' on the grass. Relegation still looms for the once Premier League side; Stoke, take note of what can go wrong.

Reading are very much battling relegation; there is simply no dressing it up. Their form isn't terrible but those in the drop zone are scrapping away for their lives. Reading need to focus on getting themselves safe rather than hoping the others around them run out of games to close the gap.

Stoke sit in the bottom half of the Championship table right now but, even so, they're only 10 points off sixth with a game in hand. That's obviously not good enough for the Potters but it does give you a sense that with a few tweaks over the summer they could be in the conversation next season. Winning these games is a must if they want to build any positive vibes before the end of the campaign though.

A quickfire FAQ on Reading vs Stoke 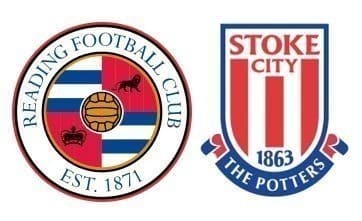