France national team boss Didier Deschamps announced his latest squad on Thursday. Les Bleus take on Sweden on the 11th of November and Ivory Coast in Lens on the 15th as part of their continued preparation for qualification for the 2018 FIFA World Cup in Russia.

The biggest headlines from the announcement was the removal of Anthony Martial and Yohan Cabaye. The Crystal Palace midfielder has been a key member of Deschamps’ squad for years, moving from a position of creative midfielder, to defensive stopper into one of his key veterans.

However, his form, plus the rise of Adrien Rabiot at Paris Saint-Germain has finally forced Deschamps’ hand. It’s another step in the evolution of the France midfield, with the 21-year-old impressing for both his club and the Under-21 side. Martial’s position is much different.

After a quick start to his Manchester United career, it has somewhat hit the wall. It started at Euro 2016, where he was disappointing, losing his place in the pecking order to Kingsley Coman. The 20-year-old has only started four times for Jose Mourinho this season and his productivity has dropped massively.

Martial scored 11 times in the Premier League last term, but has managed just one – scoring the opener in the 1-1 draw with Stoke City at the start of October. The campaign began positively, with two assists in the 3-1 win over Bournemouth, but his only goal ended a run of six league games without finding the net.

His shot per game have dropped from 1.8 to just 1, but the biggest change has been in his ability to beat defenders off the dribble. Last term he was averaging 2.7 successful attempts every game, that is down to 0.6 under the Portuguese boss. 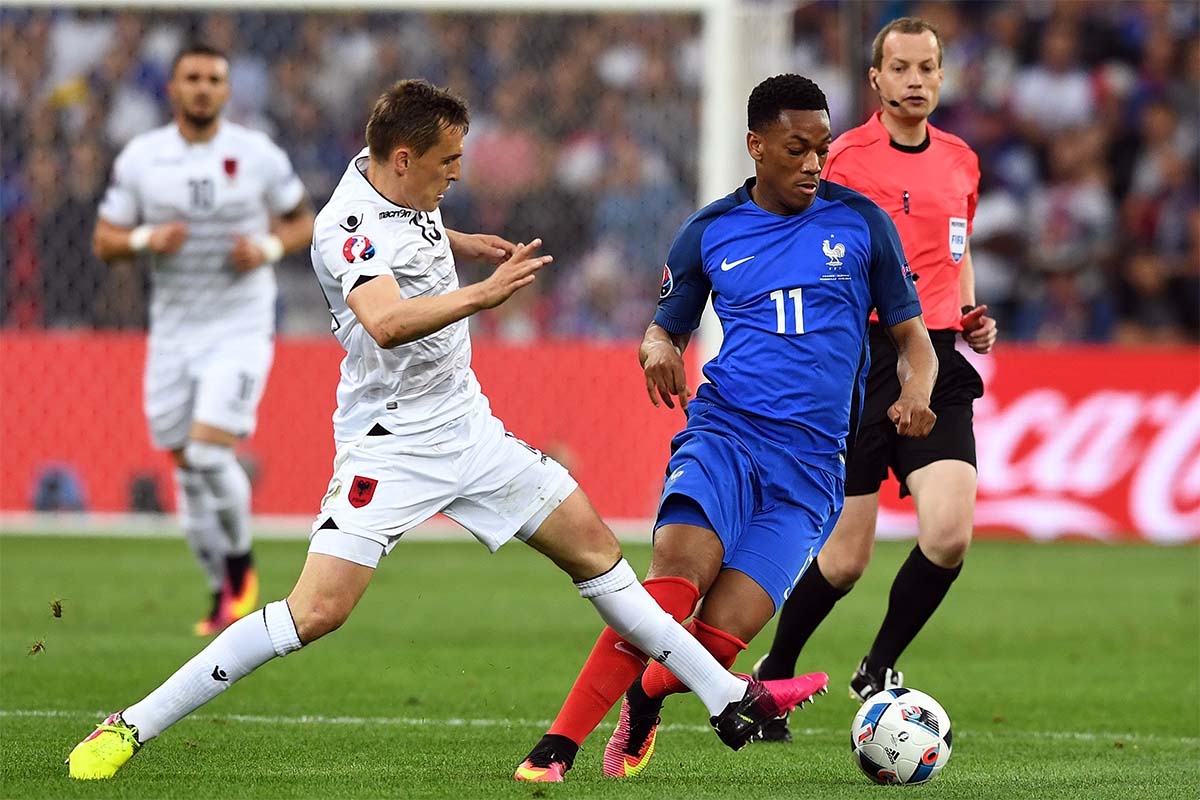 “I think Mourinho – and I – expect more from him,” admitted Deschamps. “It’s up to him to rediscover his best level, even though he is playing less at the moment.”

The former Monaco forward has clearly lost some confidence in his ability. Last season, when impressing in his first year in England, he was still losing the ball 3.1 times per game. You would expect that to increase when playing badly, but that has dropped, actually improving to 1.6 times a match. Suggesting that he is playing with less risk and being too conservative.

Against Bournemouth, he started on the left of the 4-2-3-1, but his average position had him up as high as Zlatan Ibrahimovic and Rooney. Although he got on the scoresheet against Fenerbahce, and starting in the same position, his position was around 10 yards behind the attack, level with Paul Pogba. That’s not the area where Martial plays at his best.

Whether this is a lack of attacking confidence, or Mourinho’s instructions is unclear at this stage. For France, he has now fallen behind Ousmane Dembele, Nabil Fekir and Bayern Munich’s Coman. At club level he is behind Marcus Rashford and even Memphis Depay.

Football is a very fickle sport and careers can go through the roof or in the deepest hole in the blink of the eye. Both his coaches expect more of the young forward, it will be fully up to Martial to dig himself out of this current abyss.