Starting the season in the middle of a racism storm isn’t ideal to say the least, but that’s exactly how Kenedy began 2017/18 at Chelsea.

He was sent home from the Blues' pre-season tour of Asia after Instagram posts insulting a security guard in China – they forced Chelsea to issue a grovelling apology after the People’s Daily, the mouthpiece of the Chinese Communist Party, hit out at the Brazilian.

Many expected him to leave the club soon after on loan, but he ended up staying at Stamford Bridge, largely because of Chelsea’s failure to find a back-up option for Marcos Alonso.

Despite no other club trying to entice him away from the Blues, Kenedy is set to join Newcastle United. The Magpies wanted him in the summer and Rafa Benítez has finally got his man.

A loan move: the right idea?

The Blues obviously rate Kenedy despite his misgivings off the pitch.

He arrived in 2015 for around £6.3million to high expectations as an exciting forward.

Yet, he’s failed to properly make his mark, making just one Premier League appearance since his debut season in 2015/16, where he featured 14 times, mainly under Guus Hiddink.

The Blues obviously don’t think he’s ready for first-team football for them yet, and want to test him out in the Premier League at a club lower down the table, as they’d hoped would happen at Watford last season, before he was sent back after just one appearance.

For Newcastle, it makes sense too, with Benítez’ transfer funds limited due to the protracted takeover by Amanda Staveley.

If he impresses, they could try and bring him in permanently, as they did with former Chelsea loanee Christian Atsu, while if he disappoints, they can send him back without too much fuss.

While he may have started as a winger, for Chelsea, he’s been more as a left-back or a left wing-back.

Javier Manquillo has had to play at left-back for the Magpies this season, which isn’t his natural side as full-back, due to Paul Dummett’s injury, so having more options there makes sense for Benítez.

But how does Kenedy compare to Newcastle’s current left-back options? 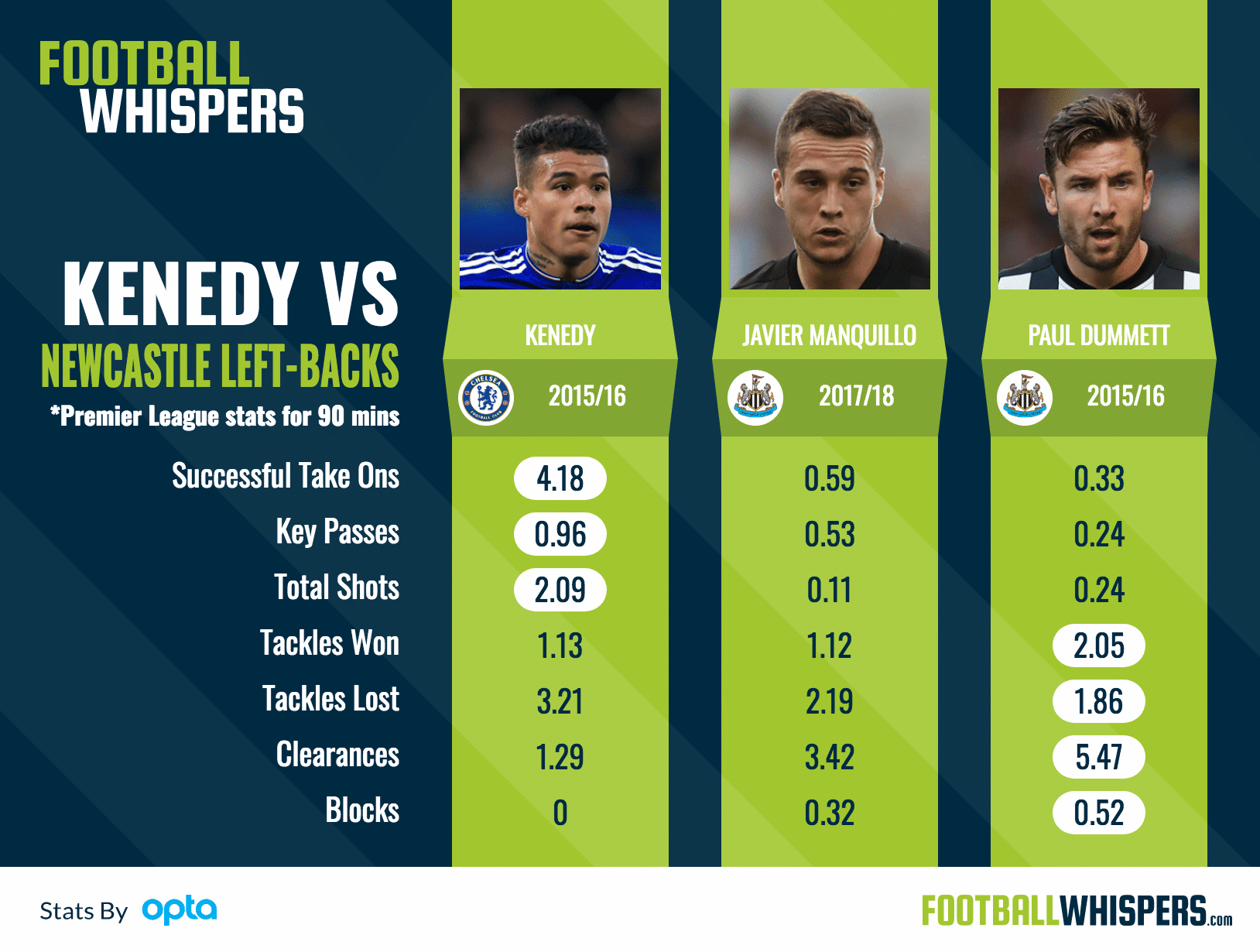 If you look at the Brazilian’s statistics from 2015/16, the last time he regularly played Premier League football compared to Manquillo from this season and Dummett (also from 2015/16 as he's just made five appearances in 2017/18), it’s clear that attacking wise, he offers a lot more.

With Newcastle finding goals hard to come by, an attacking left-back could be just what Benítez wants this season, but it would go against his usual policy of a tight defence.

Defensively though, he doesn’t stand up to the other two as well.

Kenedy is also involved in fewer clearances (1.29) than the Newcastle duo, and failed to make a single block in 2015/16.

The 21-year-old would offer something different than Manquillo and Dummett, and his attacking skills could also see him employed further forward on occasion should he be needed there, and that could be better for him.

At this vital stage of his career, what he needs is game time if he wants to live up to the potential Chelsea saw in him when they bought him two-and-a-half years ago.

If he can get that at Newcastle, it could be the move that revitalises a career that doesn’t look to be going anywhere fast at the moment. But whether he is good enough defensively for a Benítez back four, is another matter.