Transfer rumour pages have been whispering since December that Wolverhampton Wanderers would trigger the £32.6million clause in Raúl Jiménez’s contract to buy him permanently.

“Wolves may see something in Jiménez but he’s yet to totally convince that he’s worth the price,” was my verdict four months ago. With Wolves still seventh in the table and the Mexican joint-tenth in the scoring charts, that looks foolish now.

My concerns were over two things. One was whether the quality of the chances he was getting were really as good as Football Whispers’ model was suggesting. At the time, in early December, his open-play chances were worth around 7.5 expected goals but he’d scored just three from them.

Was he unlucky? Was he a bad finisher? Or was he getting worse shots than the model thought? At the time, it seemed that he was taking a lot of shots under pressure, so maybe it was a combination of the first and third options.

Since December 8, Jiménez has hit seven goals in the Premier League from open-play chances worth 5.77 expected goals, which would appear to put to the sword any suggestion that he’s taking unexpectedly difficult shots on a regular basis. He probably just hadn’t hit a hot scoring streak yet back in December.

The other concern was over some of Jiménez’s choice of shots. As his shot map shows, he has a taste for shots from distance. 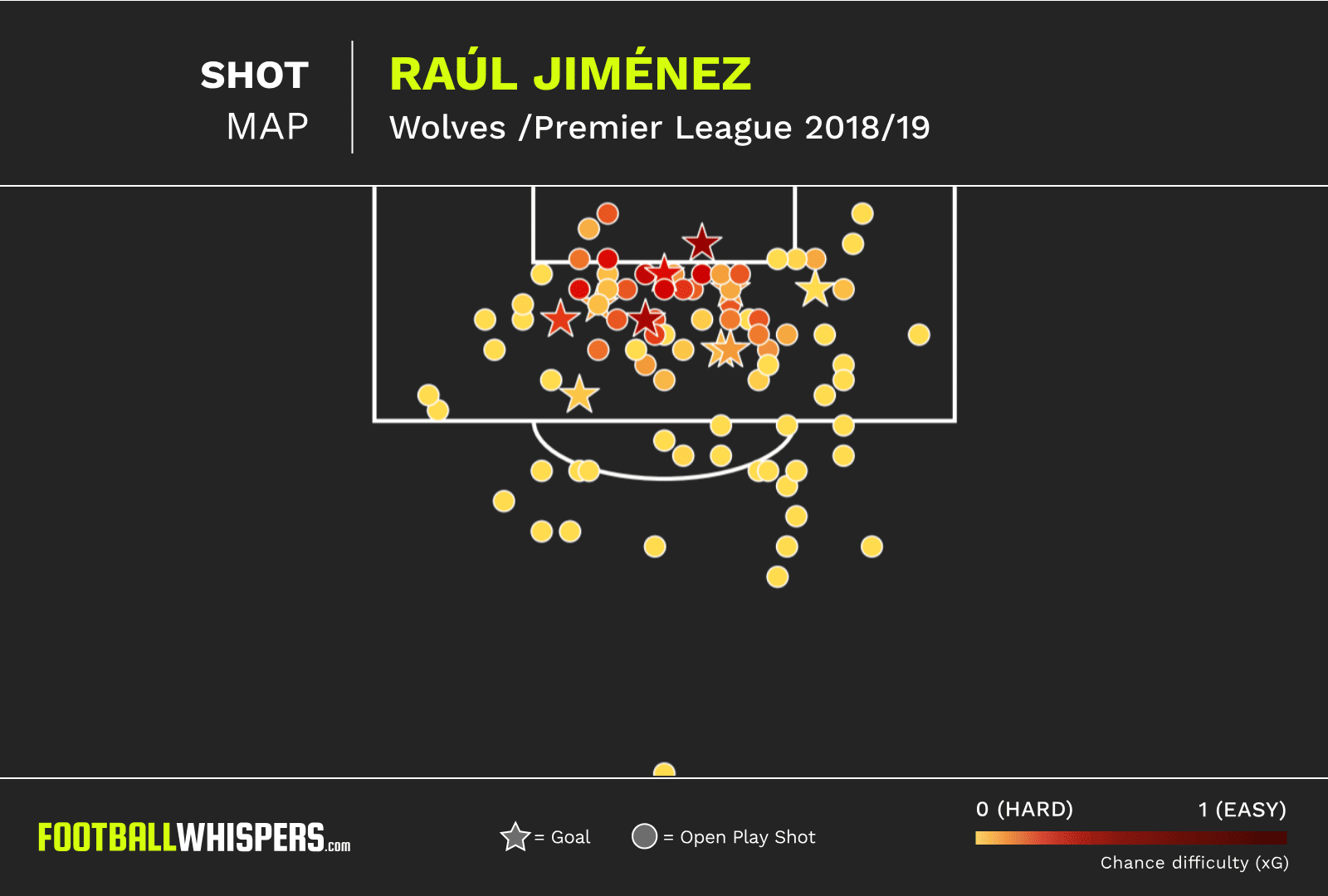 That said, so do Wolves as a whole (stat?). The concern with Jiménez extends beyond shooting from distance and into a range of inadvisable snapshots, but perhaps ‘shoot on sight’ is just an instruction passed down from the manager.

A striker who doesn’t have a nose for when a chance is good or not is worrying; one following orders, which presumably have a good reason behind them, isn’t.

Satisfied that his expected goals tally does accurately reflect the quality of chances he’s getting on the end of, we can be sure Jiménez deserves to be thought of highly.

He’s averaging 0.48 expected goals per game from open-play, and adds to that a handy 0.2 expected goals assisted. Combined, that puts him in the top ten forwards in the league and top 30 in Europe for expected goal contribution per 90 minutes.

If you consider him alongside some of his statistical peers, it helps the pricing argument. He’s just behind Bayern Munich’s James Rodriguez and about level with Pierre-Emerick Aubameyang and Romelu Lukaku. Just over £30m for any of those would be considered a snip.

The other question mark around Jimenez is track record. His one season at Atletico Madrid in 2014/15 saw him play just 598 league minutes, before moving to Benfica.

It seems like they got the latter, but there was no certainty that they would. After a good season in the Premier League, there’s even more weight behind thinking he’s the real deal. 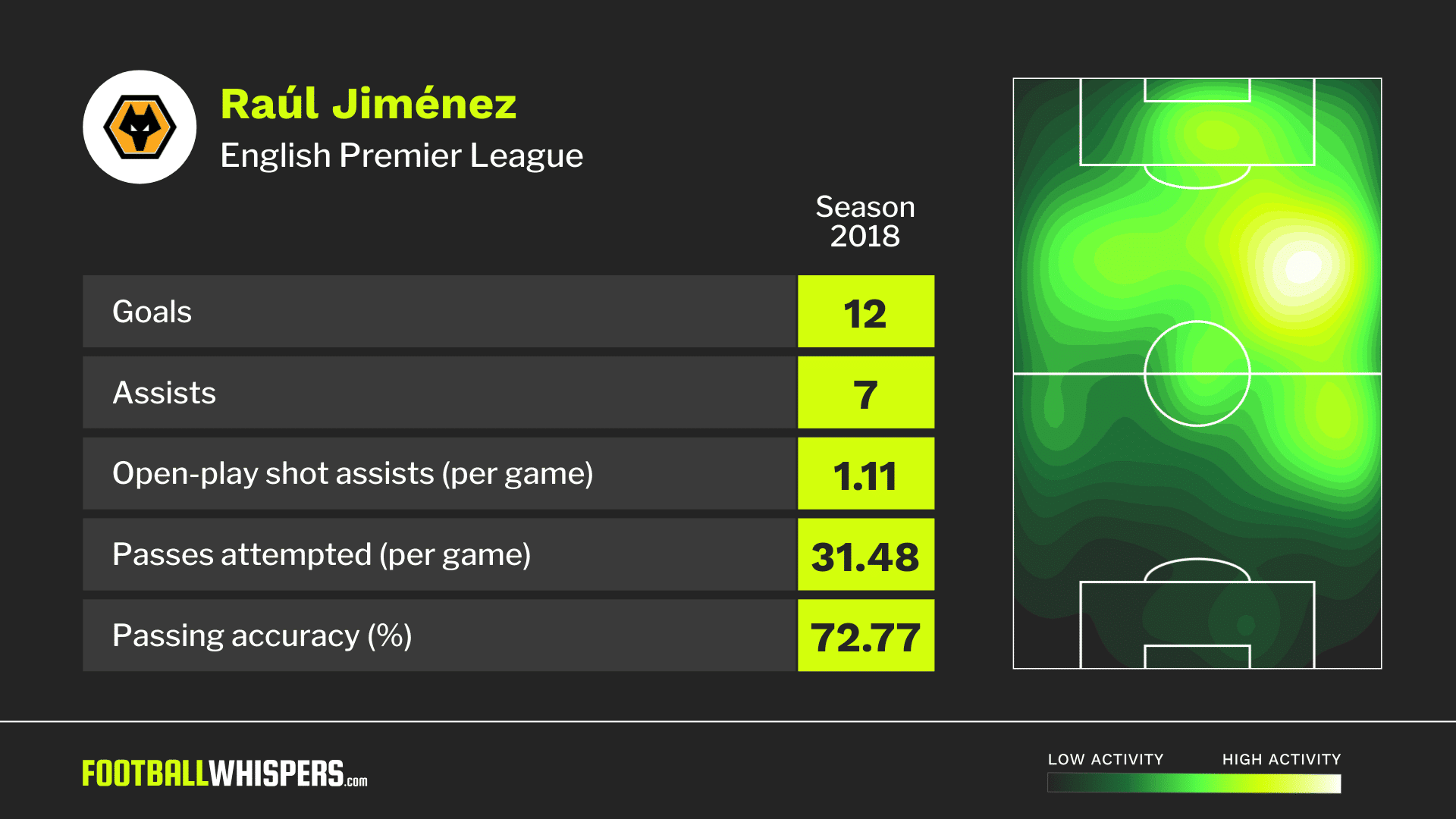 And that’s not even considering the other aspects Jiménez offers. He’s in the top quarter of forwards for winning possession in the final third and the middle third, and his heatmap points to how much he links up with the rest of the attack.

There are always question marks around any transfer. But most around Jiménez have slowly faded.