It's almost three years since Marcus Rashford announced himself to the wider football world with an unexpected start – and subsequent brace – in Manchester United's 5-1 Europa League round-of-32 victory over Midtjylland at Old Trafford.

Were it not for Anthony Martial tweaking a hamstring in the warm-up, he would merely have been a substitute that night. Had Will Keane not picked up an injury against Shrewsbury Town in the FA Cup just three days earlier, Rashford likely wouldn't have even been on the bench.

Fate threw the 18-year-old an opportunity. He grasped it. With the score 1-1 at half-time, United still trailed their Norwegian visitors on aggregate after an embarrassing reverse in the first leg. Rashford's brace sparked a 5-1 mauling, and he repeated the trick in his Premier League debut three days later, again scoring twice, against Arsenal.

It was the springboard to what has already been a remarkable career of high achievement for the now-21-year-old, becoming a United regular, earning more than 30 England caps and taking part in two major international tournaments.

Yet there is a feeling we are only now beginning to learn to find answers to long-asked questions about Rashford: what is his best position? Can he find the level of consistency required of an elite-level player? And just how high is his ceiling?

Now working under his third manager in his short time in senior football – with a fourth likely to arrive in the summer – in Ole Gunnar Solskjær, Rashford is now paired up with a coach perfectly equipped to help him improve. 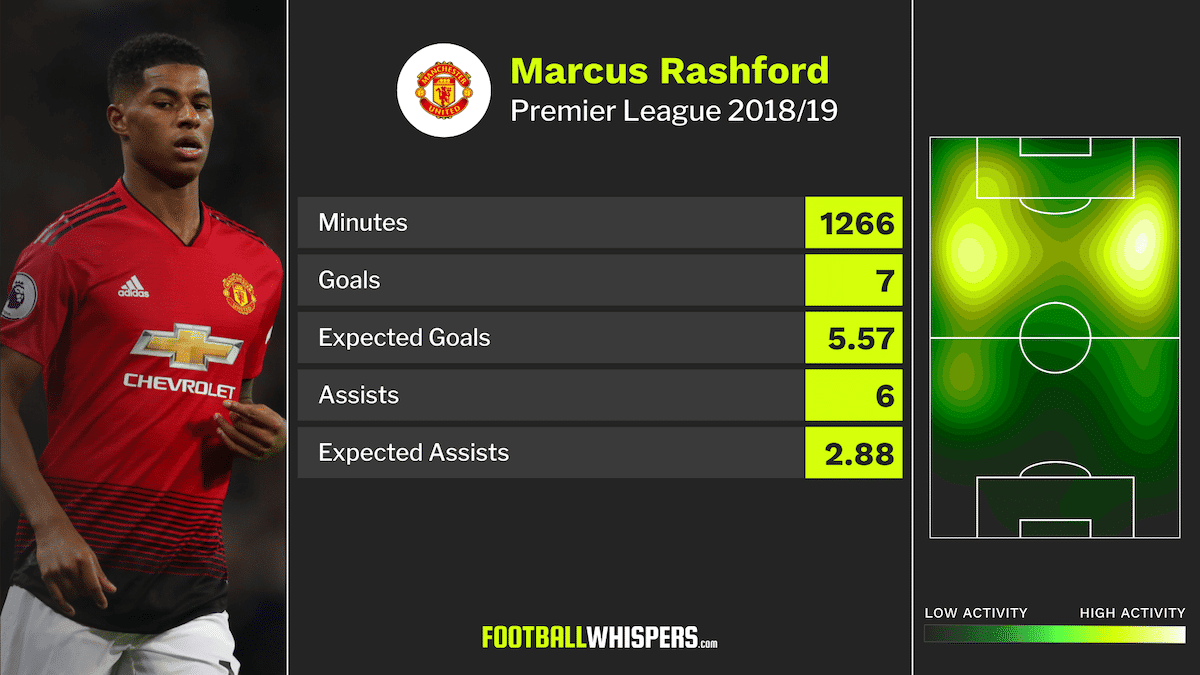 Widely viewed by most as a natural striker, the majority of Rashford's game time under previous boss José Mourinho came out wide, predominantly on the left wing. Solskjær has restored the youngster to a centre-forward remit, a position the manager knows intimately having scored 126 goals in 366 appearances during 11 years as a player at Old Trafford.

“Maybe I can give him a little bit of that nous that I had in the box – your movement to get free, that little bit of calmness in front of goal,” Solskjær United's official website.

“I've seen him rush a few finishes like, ‘I really need to get a shot off early.'

As one of the deadliest finishers of his day, Solskjær is perfectly placed to dispense advice on the finer points of goalscoring. The ice-in-the-veins coolness Rashford displayed in front of goal during his initial run in the team under Louis van Gaal in 2016 seemed to have been lost in more recent seasons, tools perhaps blunted by under-use.

He did not inspire the same feeling of inevitability when breaking through on goal as his new manager once had in his 1990s heyday, too often either missing the target or shooting too close to the goalkeeper.

That, though, is already beginning to change. Rashford has been boosted, seemingly, by the confidence Solskjær has imbued him with and the one-to-one work the player is receiving on the training field.

Since Solskjær replaced Mourinho in December, Rashford has scored four goals in six appearances; he'd managed only three for the season up to that point. And, stationed centrally, he is in scoring positions more often, his expected goals rising from 0.29 per 90 minutes to 0.60.

Rashford's renewed confidence and competence in front of goal is perfectly evidenced by his recent strikes against Newcastle United and Tottenham Hotspur, two different styles of finish that showcase different techniques and decision-making processes.

Slipped through by Alexis Sánchez, Rashford found himself in front of Newcastle goalkeeper Martin Dúbravka 12 yards out, with the luxury of time and space. Where once the gift of such freedom might have become a curse as he slipped into overthinking and hesitation, he calmly rolled the ball into the net, passing into the corner of the goal rather than thrashing at his finish – something Solskjær was renowned for.

Then, in United's 1-0 victory over Spurs at Wembley, Rashford burst through the inside-right channel, expertly found by a sublime Paul Pogba pass. Despite an apparent geometrical disadvantage, the angle of his chance requiring the utmost precision and power, he rifled past Hugo Lloris and into the far corner without breaking stride.

“Throughout the training session in Dubai [Rashford]'s been practising his finishing with the manager,” team-mate Jesse Lingard told reporters after the 1-0 win against Spurs. “It's prepared him for big games and moments like that.”

Solskjær's bespoke work with Rashford is already paying dividends for United, and the manager himself is relishing the chance to shape and guide of one English football's most talented young players.

“We can talk about Harry Kane and his class. Marcus has the potential to get up there also,” Solskjær said recently.

“He is very exciting to work with and can become a top, top striker. He's got frightening pace. He's become stronger and can hold the ball up for us.”

Likely to once again lead the line for United, Rashford is set to make the 150th senior appearance of his career when Brighton & Hove Albion visit Old Trafford on Saturday.

His progress hasn't always traced the steep upward trajectory of those early months, but recent displays have eradicated the doubts that have followed him as the enthusiasm of his breakthrough levelled off.

Thanks to Solskjær, Rashford is back where he belongs: front and centre.