Gareth Southgate is not one for hyperbole. The England manager has constantly chosen his words very carefully when speaking to the press, especially during the hysteria of the Three Lions' World Cup campaign this summer.

So it was interesting that after his side's last two fixtures – the 2-1 Nations League defeat to Spain and a 1-0 friendly win over Switzerland – Southgate was happy to lavish praise on Marcus Rashford, who had scored in both games.

“Yes he is,” Southgate said when asked whether Rashford, 20, was a special talent. “I think Harry [Kane] at that age had hardly played anywhere near the matches for Spurs.

“Some of the stepovers and things Ronaldo was doing at that age, he wasn’t converting them into the number of goals, so we have got to give him time to develop.

“I’m really pleased for him that he leaves here full of confidence. I was delighted because we really wanted to make Marcus feel important over this period.”

Southgate will have known the headlines those quotes would create, with one national newspaper website running: Marcus Rashford the NEW Cristiano Ronaldo for England – Southgate.

Now that's not what Southgate said. Nor did he say Rashford could follow in the footsteps of Kane; a man who has scored 137 goals for Tottenham Hotspur in the last four seasons and top scored at a World Cup.

However, the England manager's words should be considered. The Manchester United striker – and that is what he views himself as – doesn't turn 21 years old until next month. At this stage he is still very much learning the game.

Has being played out wide under José Mourinho benefitted him or harmed his progression? Arguments could be made for both, yet there is no definitive answer – and let's not forget Ronaldo spent his formative years as an out-and-out winger, which didn't do him any harm.

So to dismiss Southgate's comments would be wrong, especially given Rashford is ahead of Kane and Ronaldo at the same age when it comes to attacking output.

Thrust into the starting XI against FC Midtjylland in the Europa League after an injury to Anthony Martial in the warm-up, the 18-year-old struck twice on debut. Less than 72 hours later he repeated the trick, yet this time his brace came against Premier League title challengers Arsenal at Old Trafford.

A star was born. Rashford would go on to score big goals; there was a winner in the Manchester derby, as well as a strike on his England debut.

The hype snowballed and the teenager was included in the Three Lions squad for their doomed Euro 2016 campaign.

The arrival of Mourinho and the signing Zlatan Ibrahimović that summer did curtail Rashford's rapid ascent. He was pushed out to the left wing, where he has largely remained under the Portuguese boss.

It's a position from which his decisive contributions have dwindled. Yet there have been decisive game-winning moments, no more so than against Liverpool at Old Trafford last season where he struck twice.

After 125 competitive senior club games, he has netted 32 goals and claimed 17 assists. Yet many of his appearances have come from the substitutes' bench, so let's dive a little deeper.

Rashford has played 7,260 minutes in the Red Devils' first team – around 81 full matches – and has averaged a goal every 2.51 games. An impressive return for a young striker.

Add in the assists and it's a goal involvement every 1.63 matches, a figure many of Europe's top players would be happy with, let alone at 20 years old.

And tellingly, it's an output that Kane and Ronaldo couldn't match prior to their 21st birthdays.

Kane's rise to one of Europe's best strikers over the past four years is as impressive as it was unexpected.

Prior to the 2014/15 Premier League campaign there was little to suggest the now England captain could thrive in the Championship, let alone the Premier League and Champions League.

When he celebrated his 21st birthday in the summer of 2014, Kane had, in the final few weeks of the previous season, started to establish himself in the first team at Spurs. Yet he had only scored three top flight goals.

In total he had struck 21 times in 91 games, but those goals largely came in the Championship and in League One, for Millwall, Leicester City and Leyton Orient respectively.

While those numbers may look similar to Rashford's it's important to remember the Manchester United has never played outside the Premier League.

When he celebrated his 21st birthday on February 5, 2006, he was already an established member of the Manchester United side, predominantly playing out wide on the right flank. That, of course, must be taken into account when looking at his numbers.

They are figures well below Rashford and Kane, but it's worth repeating that he was an orthodox right winger until the 2006/07 season. 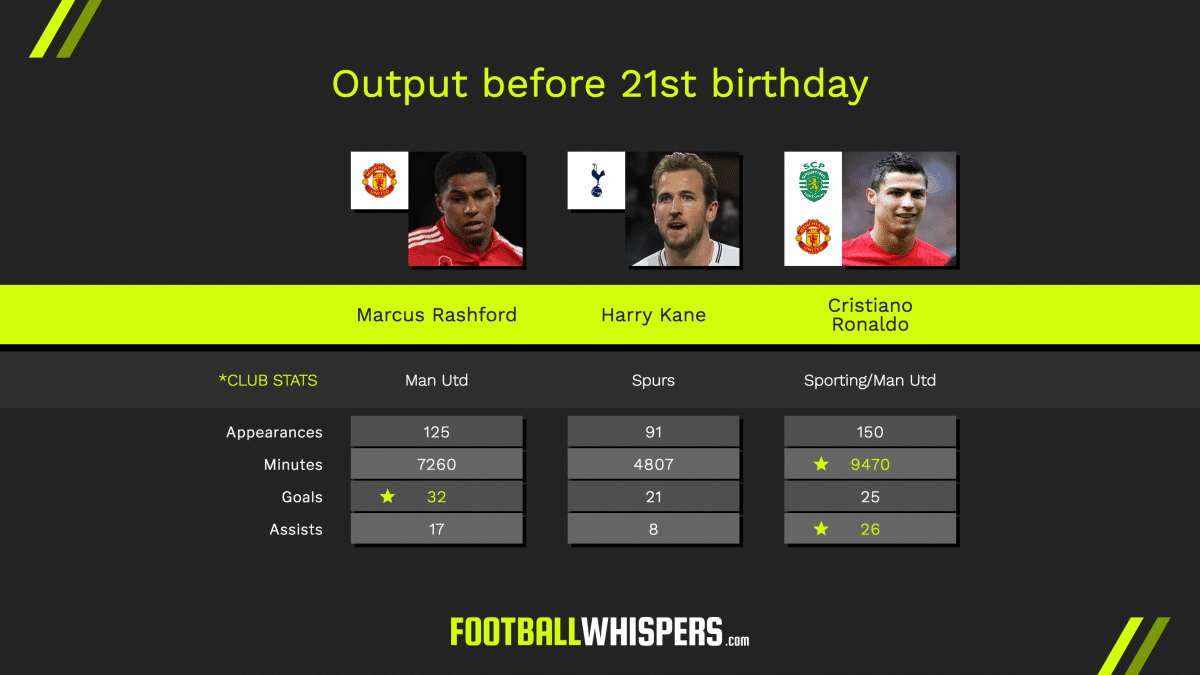 The Manchester United No.10 is certainly on the right path, but what Kane and Ronaldo both did after turning 21 years old is instantly accelerate to new heights.

Kane's lowest goalscoring season since celebrating his 21st birthday is the 28 he managed in 2015/16. Ronaldo's is the 23 he managed in the 06/07 season and, astoundingly, he's struck 30 goals plus in each of the last nine years.

And that's the challenge for Rashford: to take his game up perhaps two or three levels.

The argument can be made that the raw potential is there. Whether the opportunity is, however, is a different story.