In football, goals pay the bills. They decide matches and win points, keep managers in jobs and fans happy.

That's why there has always been a premium on players who excel in putting the ball in the net; when Manchester United boss José Mourinho bemoaned Manchester City‘s ability to “spend striker money on full-backs”, he was exposing the game's bias towards goal-getters, and their rightful position as football's most valuable assets.

As the transfer market spirals further down a path of dizzying inflation, with fees increasing exponentially on what feels like a weekly basis, the money men at top clubs will be even more determined to get as much bang for their buck as possible.

When assessing potential targets, in any position, efficiency is king; with time a precious commodity and space on the pitch decreasing through the proliferation of highly effective pressing tactics, the ability to do things quickly and accurately becomes invaluable.

Never more so when it comes to the art of dispatching goal-scoring chances. In the Premier League, there are now six teams with genuine title aspirations at the start of every season, two of whom will be forced to miss out on a the golden goose of Champions League qualification. Single digits in the “goals for” column can make all the difference.

With that in mind, we've decided to take a look at not only who the English top flight's highest scorers are, but who among them is the most clinical.

A striker's job encompasses myriad different tasks; depending on the system, they may be required to press high when out of position, hold the ball up to facilitate midfield runners, run the channels to create space inside and offer an outlet, or drop back to augment midfield when defending a result is the priority.

But chief among a striker's remit is, and always will be, scoring goals. And when chances are in short supply in high-stakes encounters, the ability to finish clinically is perhaps the most desirable trait a striker can possess.

To analyse the finishing prowess of the Premier League's current hotshots, we are going to examine two metrics: conversion rate, which calculates how many of a player's total shots end up in the back of the net; and performance versus expected goals (xG).

For the latter, we are aiming to see which players have made the most of the chances presented to them. By looking at each player's xG we see the rough goal-value of the shots they have taken this season, with historical data used to place a probability score on each effort which is then totted up. If they have a higher number of actual goals to their name than their xG score, this shows they have finished their chances at an above-average rate – the more they outperform their xG, the more clinical their finishing.

We have studied the statistics of every Premier League player with seven or more non-penalty goals to their name this season, of which there are currently 14, and excluded penalties from the figures for xG and conversion rate to give a clearer picture of open-play finishing. 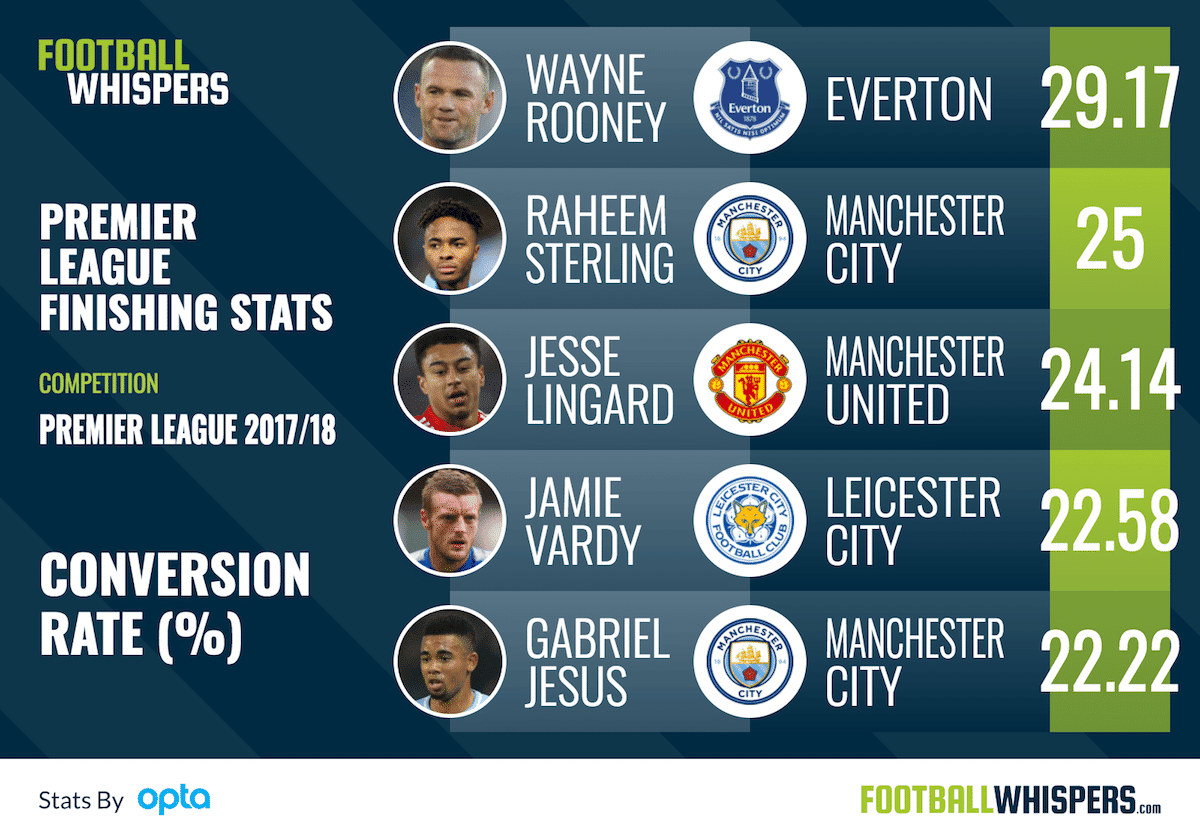 Starting with conversion rate, as the above graphic shows, Everton striker Wayne Rooney is leading the way, with his seven non-penalty goals coming from just 24 shots, giving him an incredible conversion rate of 29.17 per cent.

Placed second and third on the list respectively, versatile England international attackers Raheem Sterling and Jesse Lingard's scoring efficiency will come as a surprise to many.

The Manchester City man, previously regarded as a poor finisher by many observers, has made huge developmental leaps in this area recently, with his return of 14 league goals already a single-season career high.

Lingard's recently-discovered propensity for scoring spectacular, and often decisive, strikes from range has seen the 25-year-old become one of the most valued members of Mourinho's squad this term.

Surprisingly, top-scorer Harry Kane, who has 17 non-penalty goals, is bottom of the list of 14 players assessed, averaging a conversion rate of just 13.82 per cent, around half his average for last season. Rather than focussing on accuracy, the Tottenham Hotspur superstar is all about volume this season, taking the most shots in the Premier League.

Arsenal striker Alexandre Lacazette produced a remarkable 33.33 per cent strike rate for Lyon in Ligue 1 last season  – although many of his goals came from the penalty spot. At the Emirates, however, he is proving far less efficient, scoring with just 14.29 per cent of his non-penalty shots – only Kane proving less deadly. 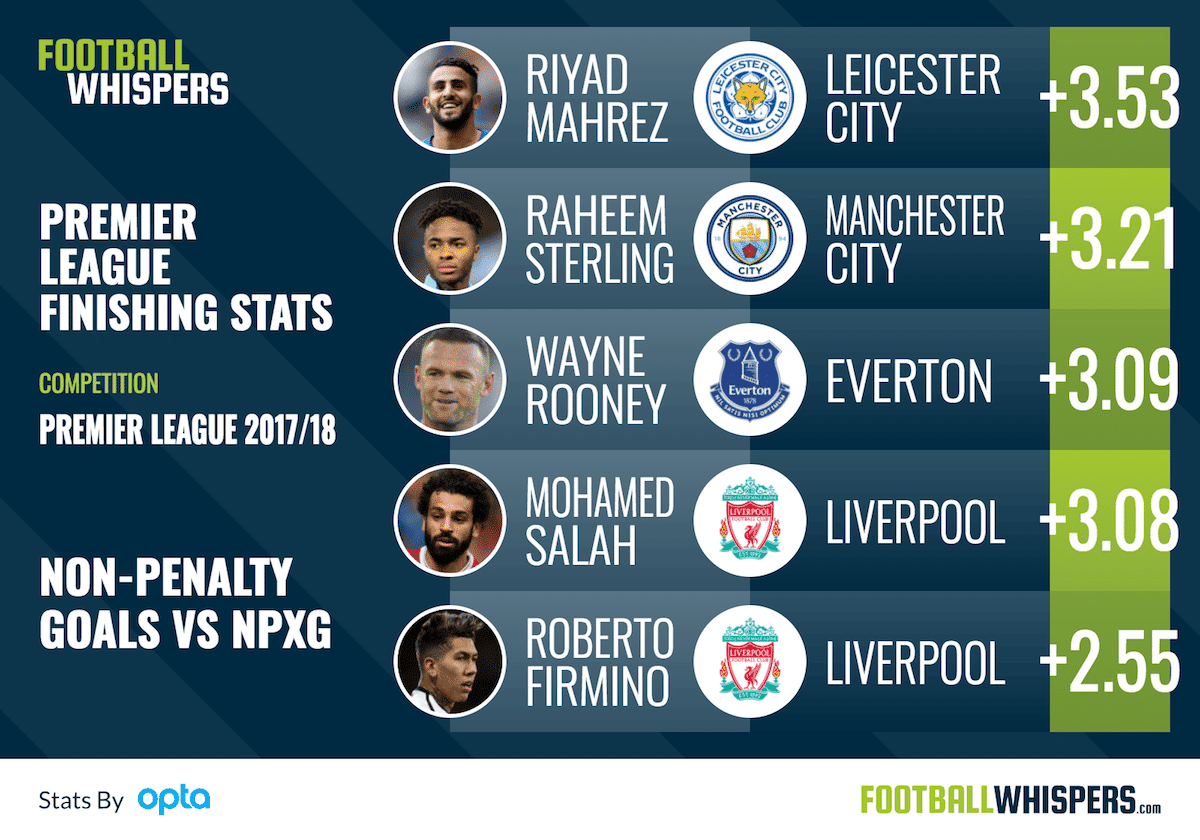 While conversion rate tells us how many of their chances a player is accurately dispatching, it doesn't give us any measure of the quality of these chances. So, if a strikers is being restricted to pot-shots from range because his side lack the creativity to pick him out closer to goal, he will understandably have a low conversion rate.

In this sense, judging a player's performance against their xG gives us a much clearer picture of how good the chances they are scoring really are.

As the above graphic shows, Leicester City winger Riyad Mahrez has done the most with the least in terms of quality of chances this term, with his seven non-penalty goals coming from a non-penalty xG (NPxG) of just 3.47.

Again, Sterling figures highly. Some have suggested that the former Liverpool star's improved goals record is more a matter of developments made in his movement than anything else, that he is scoring high-percentage chances.

While a growing appreciation of movement in and around the box has certainly helped, the fact he has scored 13 non-penalty goals from an NPxG of just 9.79 shows his finishing technique has also come on leaps and bounds.

And although Kane is outperforming his xG, he is only doing so by 1.54, whereas he finished last season with his actual goals outweighing his NPxG by 8.75.

Even giving more weight to the NPxG comparison numbers, the fact that Sterling and Rooney figure so highly in both categories appears to show that the English duo are currently the Premier League's most clinical marksmen.