They will never admit, but strikers can’t do everything on their own. They need help.

Scoring goals will always grab the headlines, but as data and analytics are becoming more readily available, more credit is being afforded to the player who create chances for the goal-scorers.

Over in France, strikers like Edinson Cavani and Radamel Falcao aren’t the type to fashion opportunities for themselves, they rely on their team-mates and luckily they have some excellent options behind them.

In order to find the most creative players in Ligue 1 we have scoured every team in France’s top-flight and started with the 60 players with the highest Expected Assist (xA) rating per 90 minutes among player who have featured for over 700 minutes.

Then we factored in the amount of key passes they make, the number of forward passes and their successful dribble attempts per 90 minutes.

The results were rather surprising. Some of Ligue 1’s most talented players are at the top where you would expect, but with Julian Draxler sitting down in 13th, Memphis Depay in 22nd and Arsenal and Liverpool transfer target Thomas Lemar down in 20th, the top ten is a very interesting read.

The Portuguese playmaker is now one of Monaco’s old school. Signed when Falcao arrived, he’s seen them all come and go and is still providing experience and a cutting edge to the relatively young squad.

If he had the speed to beat players off the dribble he would only begin to climb even higher up this list.

Perhaps the biggest surprise on the list. Playing for bottom-placed Metz, you wouldn’t expect any of their players to featured in a top ten of anything.

His team has only scored 13 goals and won three games, but everything good they do has Dossevi at the heart of it.

With four assists this term, more would have been expected from the Lyon attacker from a creative sense, but he’s more than made up for it with his finishing.

He’s impressed with 4.13 successful dribbles per 90, only Neymar and Allan Saint-Maximin managed more this term.

Fekir would hope for more than 1.2 key passes per 90, but he’s opening up space for others to thrive. Terrorising defence with his running ability is more than enough to get him on this list alone. 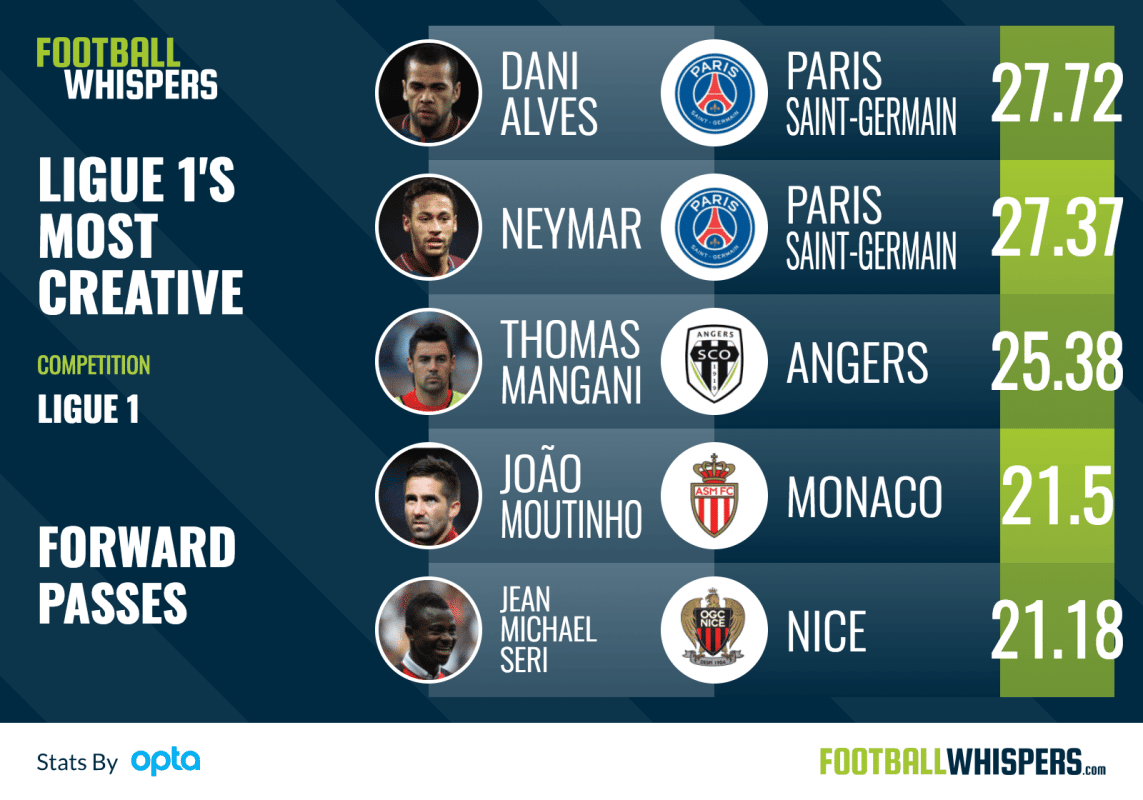 The Ivorian midfielder is still a wanted man. Arsenal, Liverpool, Barcelona and now Paris Saint-Germain reportedly are back in. He’s not reaching anywhere near his numbers of last season, but his 21.18 forward passes per game, ability to beat players off the dribble and consistent xA90 (0.19) keeps him high in the list.

His return of 1.63 key passes per 90 puts him comfortably in the top ten and suggest his lower numbers are the fault of his team-mates, not the Nice midfielder.

Ready to leave PSG, the Argentine playmaker has the numbers to back up the belief he has been under-utilised at the Parc des Princes.

With 748 minutes played he just squeezes into contention, but with 17.25 forward passes and 1.62 key passes per 90 minutes, he is an above average creator. Backed up with xA90 of 0.23, he is much better than his one assist suggests and would make a tremendous January signing if placed in the right team. 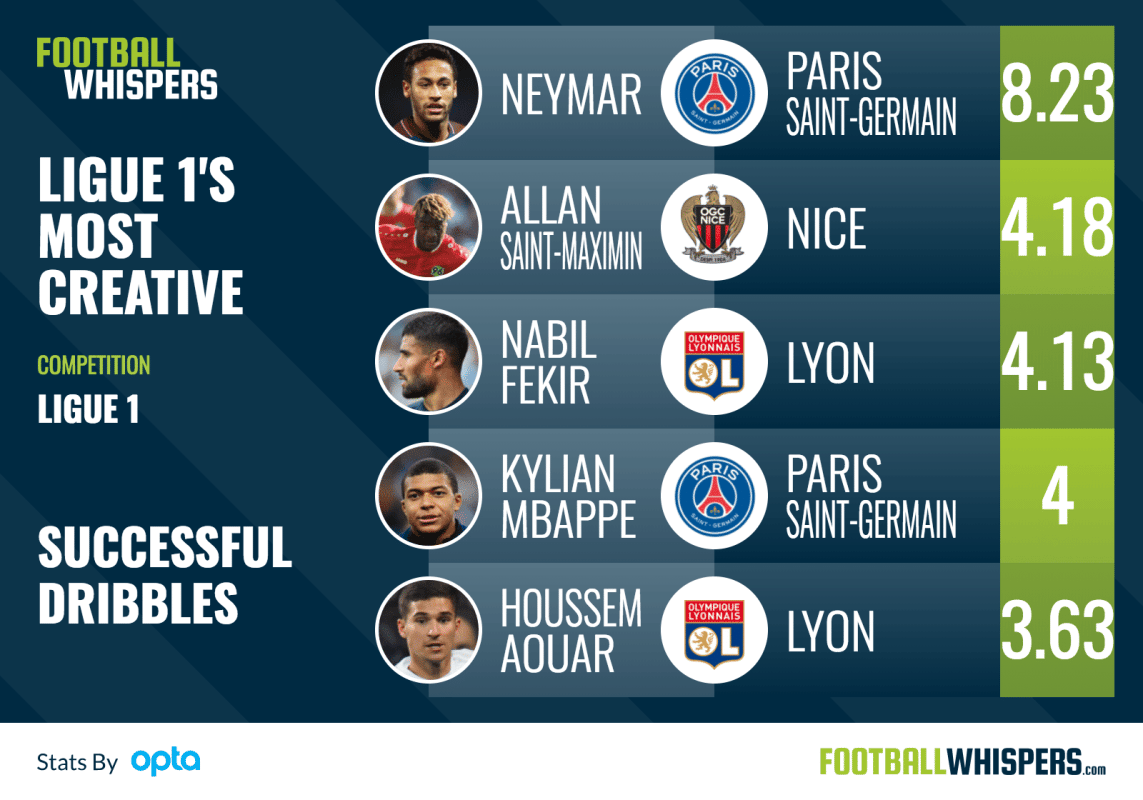 It seems bizarre that a 19-year-old forward who has just switched teams, played in the Champions League semi-final and is about to win his second league winners’ medal in two years, has come under some crticism for his form this term.

Perhaps it is the expectation his amazing 2017 put on his shoulders, but with eight assists, an xA90 of 0.42, 1.84 key passes per 90 and four successful dribbles per 90, Mbappé is as productive as ever.

It helps that PSG have both Neymar and Cavani, but it shouldn’t take anything away from what the teenager has achieved.

One of Ligue 1’s hottest young properties. Arsenal are trying to lure him away in January, but Bordeaux know how important he is to their survival chances.

He’s not all about long-range shots and stunning GIF-worthy goals, there’s a very creative player in there too.

The Brazilian ranks within the top ten in xA90 (0.33), key passes (1.81) and successful dribbles (3.12) which is ridiculous playing for a club sitting 15th this term. The only criteria which lets him down is his xA 3.92, but only cause he is meeting it with four assists. Still only 20 years old, you can now understand why Les Girondins are hiking up their asking price. 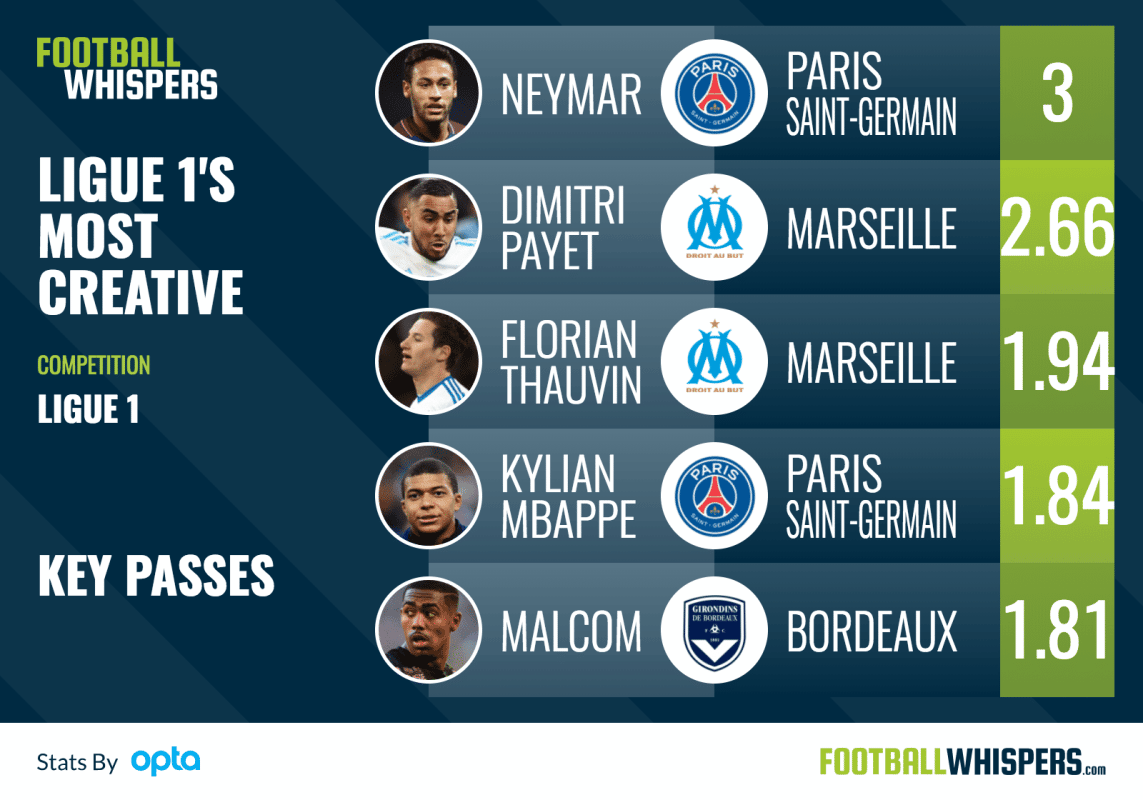 A return of two goals and three assists is far from what the Marseille fans would have been hoping for this season, but it doesn’t tell the whole story.

This term Payet has an xA90 of 0.5, which is better than one of his team-mates (more on that later), Malcom and Mbappé. With an xA of 2.17 it suggests the France international has been let down by the players in front of him and perhaps why OM are still looking for a long-term No.9.

He ranks second in Ligue 1 in key passes per 90 with 2.66 and with 1.33 successful dribbles, he can still beat men with the ball at his feet.

One of the most improved players in Ligue 1 this season. Thauvin has gone from potential star at Bastia, flop at Newcastle United, to superstar back at Marseille.

Eight goals and seven assists show how crucial he has been in the final third, and he ranks third in France in both xA90 (0.46) and key passes (1.94). What makes him so dangerous is his ability off the dribble, too, with 3.52 successful take-ons per 90.

Thauvin has become the spearhead of the Marseille attack, a pressure-cooker hotter than St. James Park. Some doubts linger over his big-game performances, but with these numbers he is showing consistency on top of the flashy step-overs. 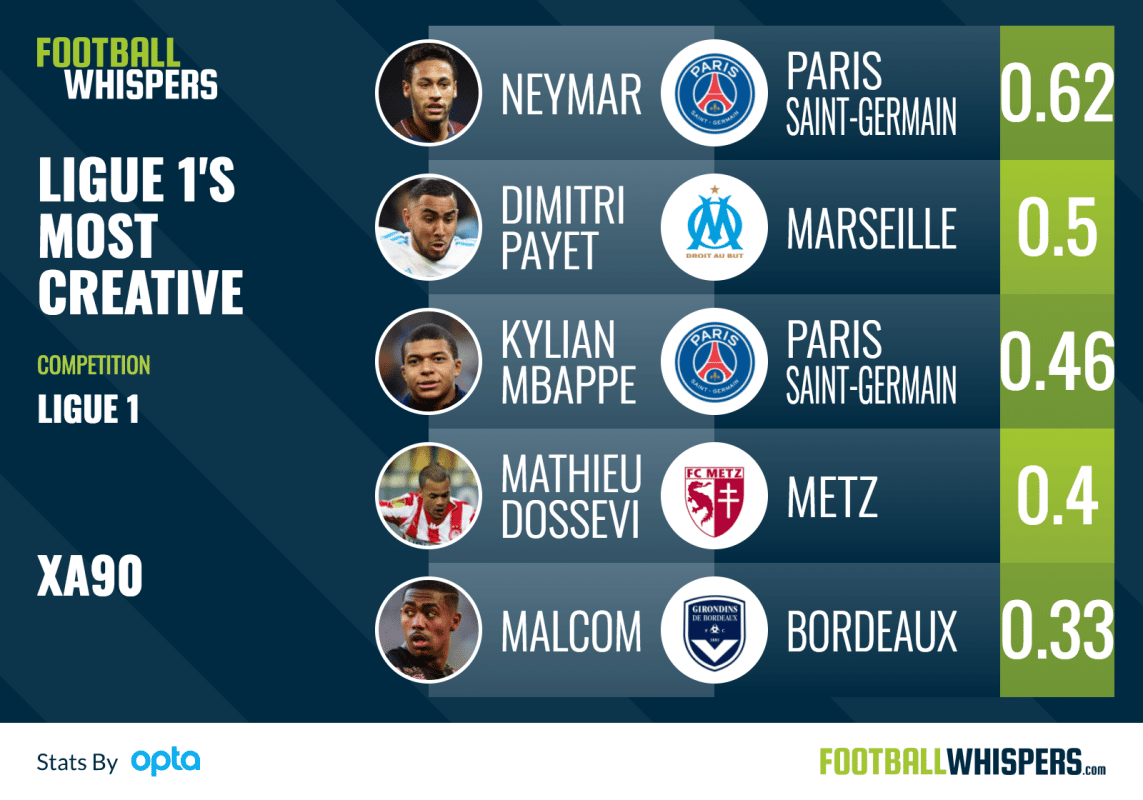 Was there ever any doubt. The Brazilian is trying his best to repay PSG’s £196million investment, adding 11 goals to his nine assists.

The numbers from the 25-year-old are just scary, he leads the league in xA90 with 0.62, a whole 0.12 ahead of Payet in second. He completes 8.23 successful dribbles per 90, just under twice as more as Saint-Maximin in second.

Only two players make more forward passes and one of them is Dani Alves, hard for him not to send the ball ahead of himself at full-back, plus he leads the league with three key passes per 90.

There’s really not a lot else PSG could ask of their superstar forward.