As the January transfer window creaks open once again, leagues like Ligue 1 in France and Germany's Bundesliga are awakening from their winter slumber, rather than coming out of the busiest period of games, like their English cousins.

Ligue 1 sides joined the Coupe de France this weekend and league duties are about to resume. We thought it would be the perfect time to take a closer look at the men scoring the goals so far this season.

With the cold weather not letting up, we’ve used statistics to pick up the hottest forwards in Ligue 1.

In order to rank them, we’ve measured expected goals (xG) per 90 minutes – xG models measure each shot taken in a game to judge its statistical likelihood of being scored, based on the position from which it is taken – how well a player is performing alongside their xG score, their ability to turn shots into goals (conversion rate), and their expected assist (xA) per 90.

Modern football has become about more than just putting the ball in the net, whether a wide-man or a centre-forward, you need to be able to bring others into play, rather than waiting on your own, playing as an isolated front-man.

We ranked every player who has scored four or more goals this season, plus made ten or more appearances, that’s just over half.

In 11th, Mbappé was let down by his eight goals, compared to his xG score of 9.99. Although his xG90 and his xA90 ranks him in the top three. For a 19-year-old, he is enjoying a tremendous season.

Malcom, flavour of the month in England, has outperformed his xG of 3.92, scoring seven times, some of which have been outstanding strikes from distance. His xA90 of 0.33 ranks him fourth in Ligue 1.

Thauvin, much to the surprise of Newcastle United fans, has enjoyed a fantastic year, scoring eight times. Only Neymar has a higher xA90 rating than the French international.

His conversion rate of 9.9 per cent was his undoing, seeing him finish in 18th place. Still a terrific campaign, and he will likely rank extremely high when measuring the league’s creative players. 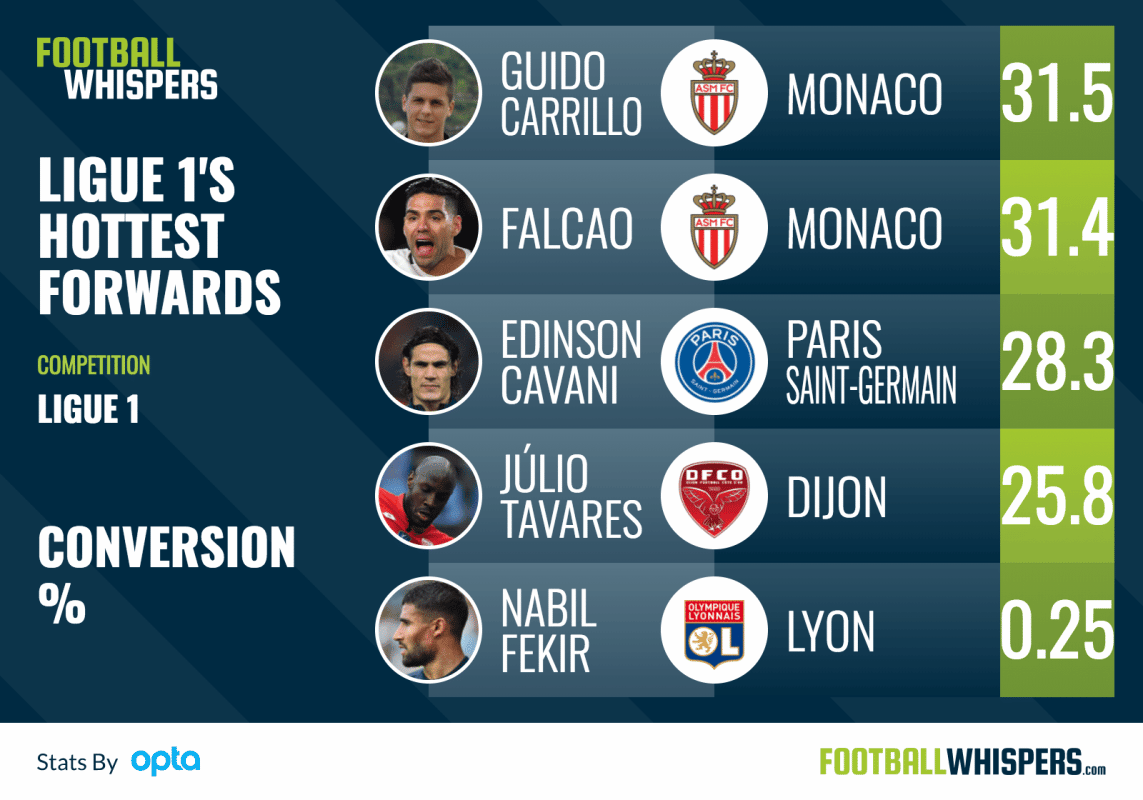 He may only have four goals this season, but the Southampton transfer target is only of the most deadly attackers on this list.

An incredible 31 per cent of his shots find the back of the net, and with 2.85 per 90 minutes, he is almost guaranteeing one a game if Monaco coach Leonardo Jardim handed him more than the 410 minutes he’s managed this season.

The Algeria international is enjoying a return to form on loan from Sunderland. He has six goals this term and has performed solidly across the board.

Playing a more central role in the attack, he is outperforming his xG of 4.43 and 22 per cent of his shots this season are finding the back of the net.

Sunderland may not want him, but he won’t find it hard to lure a new permanent home.

Linked with a winter move to Brighton & Hove Albion, the unheralded Angers forward is another outperforming his xG score on 7.18, finding the net nine times in Ligue 1.

Able to play across the attack, he has also added two assists and his xA90 return of 0.17 ranks him in the league’s top ten amongst the forwards listed.

After a slow start, the former Manchester United winger has come to form, helping Lyon maintain their hopes of a return to Champions League football. He has eight goals and five assists this season, which is higher than what both his xG and xA suggests he should have at this stage. 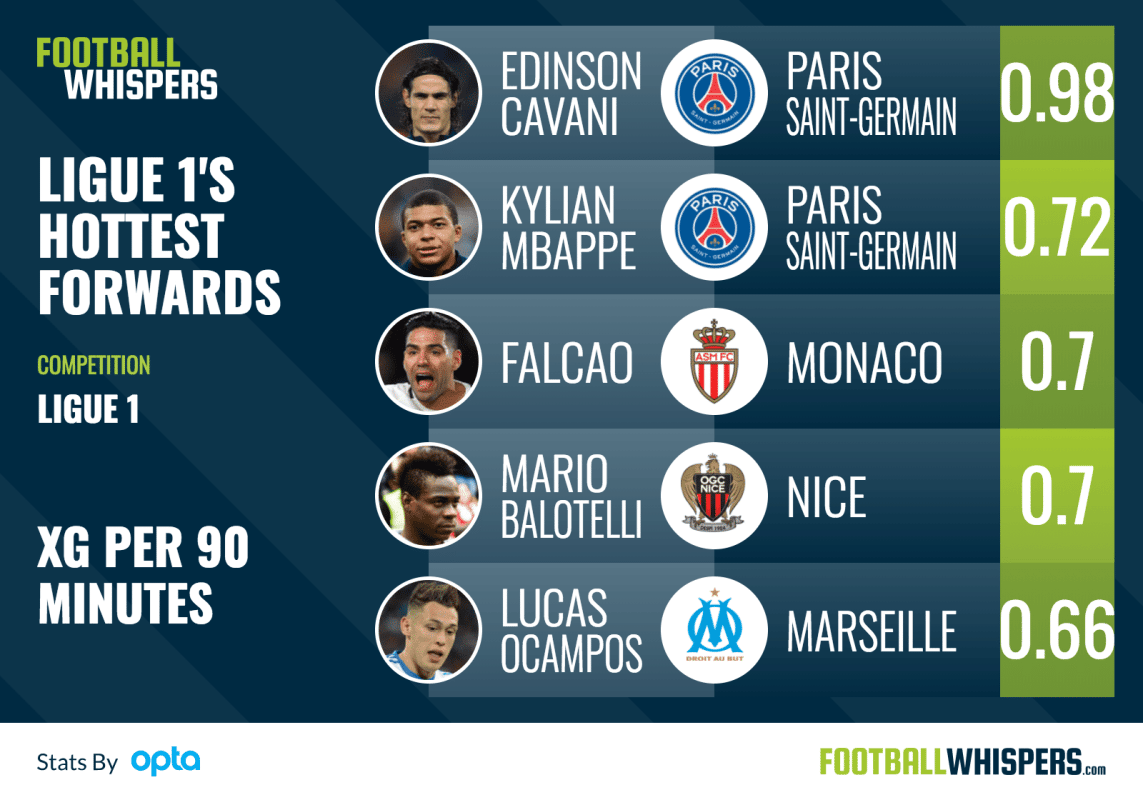 Never out of the headlines, his club may be struggling but the fact the Italian striker has scored ten times this campaign has gone somewhat under the radar.

Only two players have a better xG per 90 score. An impressive 20 per cent of his shots find the back of the net. When he’s on his game he is still one of the most dangerous forwards with the ball at his feet.

On loan from Real Madrid, the Spanish forward has found his feet very quickly, helping himself to 13 goals this term. Rather than play selfishly, he’s added three assists too.

With an xG score of 8.33, no one in the league has outperformed the metric, but with 24 per cent of his 3.31 shots per 90 beating the goalkeeper, it’s hardly a huge surprise.

After an incredible debut campaign, it will be interesting to see what happens in the summer. 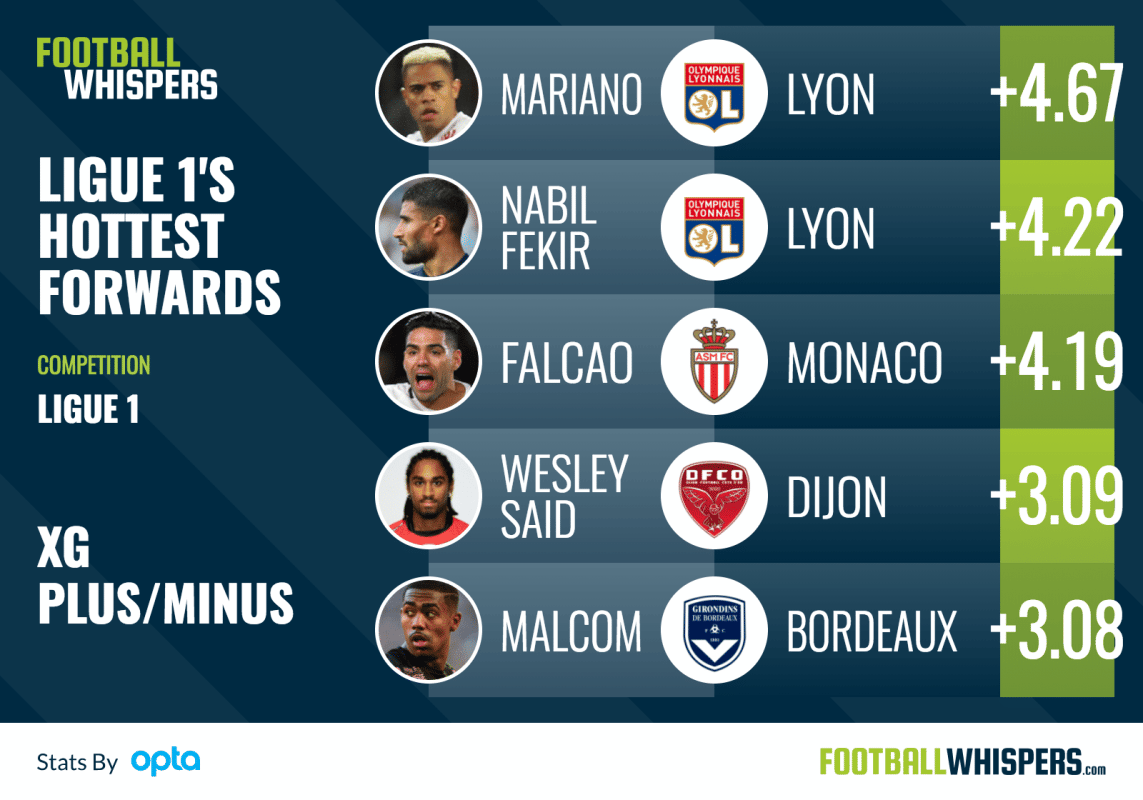 The Colombian hit-man may not be hitting the same heights as last season – but no one in Monaco is – but he comes in the top three in terms of xG90, his effectiveness and his conversion from shots to goal.

With 15 goals, he is still one of Ligue 1’s leading marksmen. The only element which lets him down is his ability to create chances for others, with an xA90 of just 0.08, but at 31 years old, you are not going to change him, and you wouldn’t want to.

Ligue 1’s €200million man would be disappointed to finish in bronze medal place. It’s the Ballon d’Or voting all over again. He has 11 goals and nine assists and it’s no surprise he finishes top of the expected goals per 90 minutes category.

With 20 per cent of his shots finding the back of the net and over-achieving on his xG of 8.33, there’s not much else he could do.

The Brazilian wasn’t bought just to provide goals, and he is doing exactly what he needs to do. 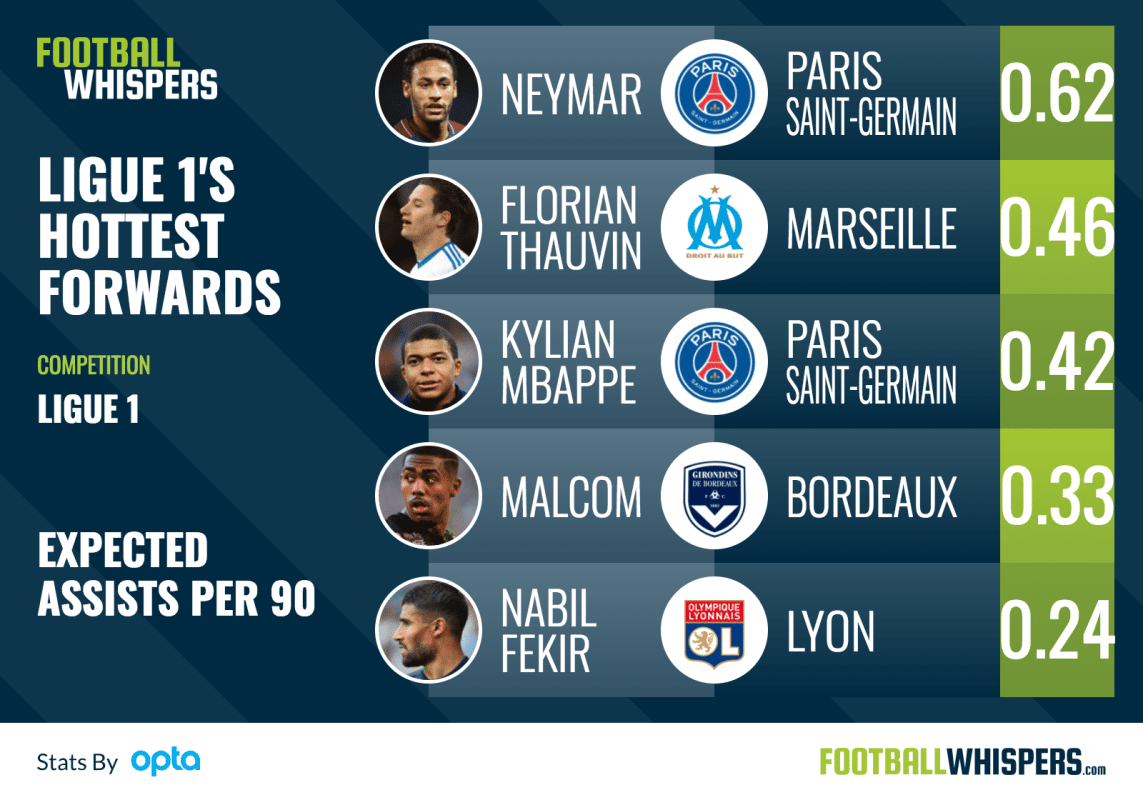 Playing in OL’s new formation, with Mariano ahead of him and Depay on the flank, there’s little doubt Fekir is flourishing in the No.10 role.

He is able to drive from deep, link up with the forwards and has been an absolute menace all season. His form has seen him become a possible replacement for Alexis Sánchez at Arsenal.

Becoming more of a finisher than a creator, he has 13 goals and four assists, which is way above his xG of 8.78 at the halfway stage. Creatively he’s ranked sixth amongst forwards and more than deserves to sit second in this list.

Was there any doubt? The Uruguayan leads the Ligue 1 scoring charts with 19 goals, has the highest xG in the league and is scoring with 28.3 per cent of his shots on goal.

He is averaging 4.24 shots per 90 and is probably the happiest forward in the world when it comes to the emergence of xG data.

Often criticised for missing too many chances, he has more goals than xG suggests and the third best conversation rate in the league.

With 19 goals in 18 games, an excellent run of form after the winter break could see him aim for the 40-goal mark.