Based on the thought-process behind Shahid Khan’s appointment of Claudio Ranieri to replace Slaviša Jokanović, the Italian has had ample time to dream up solutions to Fulham’s myriad problems in the Premier League.

In his programme notes for Ranieri’s first match in charge against Southampton, Khan writes: “I conducted the appropriate due diligence as to potential successors, and among many highly qualified candidates – some of whom were interviewed, others not – there was one man who clearly had done his research on our squad, wanted the challenge and was ready to go the instant his name was called. That’s Claudio Ranieri.

“He revealed to me during our interview that he had attended nearly every Fulham home match this season and viewed the others in some other fashion. There were other strong candidates under consideration, but none who understands the Premier League, our club, our players and even our supporters like Claudio.”

Now, Ranieri may have been slightly economical with the truth – after all, we all lie a tiny bit in job applications – but he does seem the honest type plus Craven Cottage is a lovely place to watch football on a Saturday afternoon, so it has to be taken at face value.

If that is the case Ranieri will be fully aware he inherits a team whose confidence has been slowly eroded after a string of poor results and whose strengths at the start of the season, as they arrived in the division under a degree of hype, soon became their weakness.

Fulham were, just like Wolves and different to Cardiff City of the promoted teams, seen as Premier League-ready; full of technically-sound individuals with a significant investment made in the some to add an extra layer of quality to their squad.

Except after the initial buzz of watching a neat and tidy side pass the ball comfortably and claim the odd positive result at home to Burnley and Watford and away to Brighton, it soon became crystal clear they, to simplify their predicament, cannot defend and possess one of the league’s weakest attacking units.

You can compensate for one if you are strong in the other department but being able to get the ball down and play can’t mask either deficiency, which means Ranieri has to initially focus on one and, given his heritage, that should be the defence.

The Cottagers have conceded an alarming 31 goals in 12 games, six more than the next two worst teams Cardiff and Burnley, if they maintain that ratio they’ll finish the season having shipped 98 – that’s only two less than the league record of 100 by Swindon Town in the 1993/94 campaign, although that was over 42, not 38 matches.

The flow of goals simply has to stop, however, Ranieri may be able to revolutionise their attack. Fulham only rank third worst for shots conceded with 16.3 – Burnley well out in front on 21.1 – while they’ve let in nearly six more than their expected goals conceded of 25.23.

That means one of two things, or probably both, that the opposition are receiving a worrying amount of high-quality chances and that Ranieri has a goalkeeper issue.

Jokanović clearly thought this as he worked his way through three No 1s this season: his first-choice last season Marcus Bettinelli (seven starts), Fabri (two) and the current incumbent, Sergio Rico (three). Presumably, Ranieri will have a preference already, if not he needs to find one quickly.

Limiting the number of quality chances they’re allowing the opposition is also of paramount importance and clearly, a change in approach is required as the sheer volume of shots they’ve allowed in their own 18-yard box is worrying.

Ranieri isn’t big on pressing but then neither was Jokanović as Fulham rank 19th for possession won in the attacking third and 15th in the midfield area plus only six teams make fewer tackles than them (15.4). Those numbers simply have to increase as it’s clear it’s just too easy to play through them.

As per Understat.com, Fulham have allowed 114 passes to be played within 20 yards of their goal, that may be three less than Cardiff and Burnley, but when fellow strugglers Huddersfield have permitted just 57, it shows the level of pressure being placed on their defence and goal.

That 23 of their 31 goals conceded – 75 per cent – have been from open play only reinforces this.

Ranieri has tenacity in attack with Aleksandar Mitrović, energy and physicality through the centre of midfield with Jean-Michaël Seri, Tom Cairney and Andre-Frank Zambo Anguissa. The requisite pressure on the ball is achievable with the right mindset. 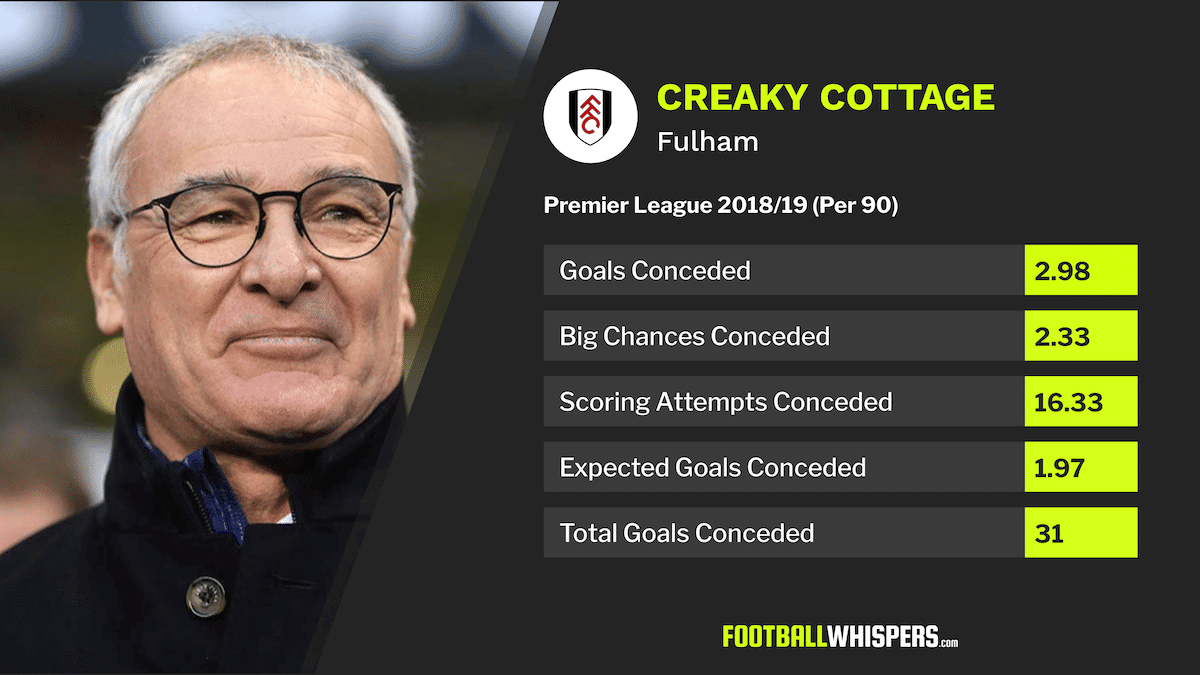 The sheer volume of goals they’ve conceded has almost masked their deficiencies in the final third: 15th for shots on target (3.75), 13th for big chances created (1.25) while only three teams have a worse xG than their 11.68.

Granted, they haven’t been as bad in attack but if you’re going to leave yourself so exposed defensively, you have to at least double your efforts going forward and in only two games have they bettered the opposition’s xG – Burnley and Watford at home – and just five times did they breach the 1.00 mark.

Ranieri knows he will inherit a group of players exceptionally comfortable on the ball, Fulham rank seventh for accurate passes (389.58), seventh for touches (675.25), eighth for average possession (50.8 per cent) and seventh for pass completion (80.7 per cent), but that isn’t translating into consistent shooting opportunities.

And although Ranieri’s somewhat throwback direct, 4-4-2 style may not seem an obvious fit for this group of players it could be precisely what they need to inject some purpose into their attacking play.

Ranieri has André Schürrle to perhaps adopt the Riyad Mahrez role, but maybe Ryan Sessegnon could be moved into midfield to balance out the team and also help his defensive integration into the top-flight.

There is also the role of Mitrović, unquestionably Fulham’s best striker and his five goals in 12 games is a solid return in such a sub-standard attacking side but Ranieri’s methods could get even more out of the Serbian.

Mitrović is an excellent player in the air, yet Fulham rank just 19th for total crosses (14.16) and accurate crosses (3.25) per game. Ranieri’s quicker, more intensive offensive methods, bringing more width into their play could increase these numbers, theoretically providing the 24-year-old with more aerial opportunities to score.

But Mitrović also needs support and of the regular starters, only Schürrle is averaging more than 2.0 shots per game. That impressive midfield unit has to provide more of a goal threat, beyond long-range shooting.

In raw numbers, Mitrović (43) and Schürrle (37) have accounted for 55 per cent of all their attempts. The next two after that duo are Sessegnon and Luciano Vietto on just 11 each.

Life is hard in the Premier League but Seri was averaging 1.2 shots per 90 last season for Nice, in England it’s been just 0.5, while Cairney was at 1.7 in the Championship but is 0.6 this term. Fulham’s attacking threat is not only meek, it’s predictable.

They’ve also scored just once from a set-piece situation this season – Mitrović in the 4-2 win over Burnley in August – and, as is becoming increasingly apparent, corners and free-kicks represent under-valued opportunities to find the target. Just ask England manager Gareth Southgate or Eddie Howe at Bournemouth.

For a struggling team like Fulham, it would be remiss for them not to work on honing that craft although, that said, in the season Leicester won the Premier League, set-pieces accounted for just 11 of the Foxes’ 68 goals (16 per cent) so maybe don’t expect a marked improvement.

Ranieri has plenty of work to do but Fulham are only three points from safety and with plenty of quality in their squad in a Premier League where at least seven teams can be considered justifiably bad. Having watched so much football already this season, the Italian will know this more than most.