Of all of Mark Warburton's signings as Rangers boss perhaps the biggest disappointment has been Jordan Rossiter. Not because the former Liverpool prodigy has been a let down but because he has been injured for much of the season, leaving the Gers without a natural holding midfielder.

The 20-year-old moved from Anfield with Rangers paying a compensation fee of £250,000 to bring the highly-rated midfielder to Ibrox.

But a back problem, which has caused recurring calf and hamstring issues, has restricted the England youth international to just four appearances for the Scottish Premiership outfit this season.

However, Rangers boss Pedro Caixinha will reportedly plug the gap at the base of his midfield with the signing of Rotherham United midfielder Will Vaulks.

We've run the rule over Vaulks and looked at what the 23-year-old midfielder could bring to Ibrox.

It has been a miserable season for Rotherham who will be relegated from the Championship having conceded 97 goals with a game to go. Yet Vaulks has been one of the few bright spots for the Millers.

Signed last summer from Falkirk, where he made more than 100 appearances, Vaulks has been tasked with given an overworked defence and goalkeeper with some protection.

But despite Rotherham's awful record, Vaulks has posted some impressive defensive statistics this season. He makes the second-most tackles per game in the Millers squad (2.6) and the most interceptions of any midfielder (1.5) at the New York Stadium. 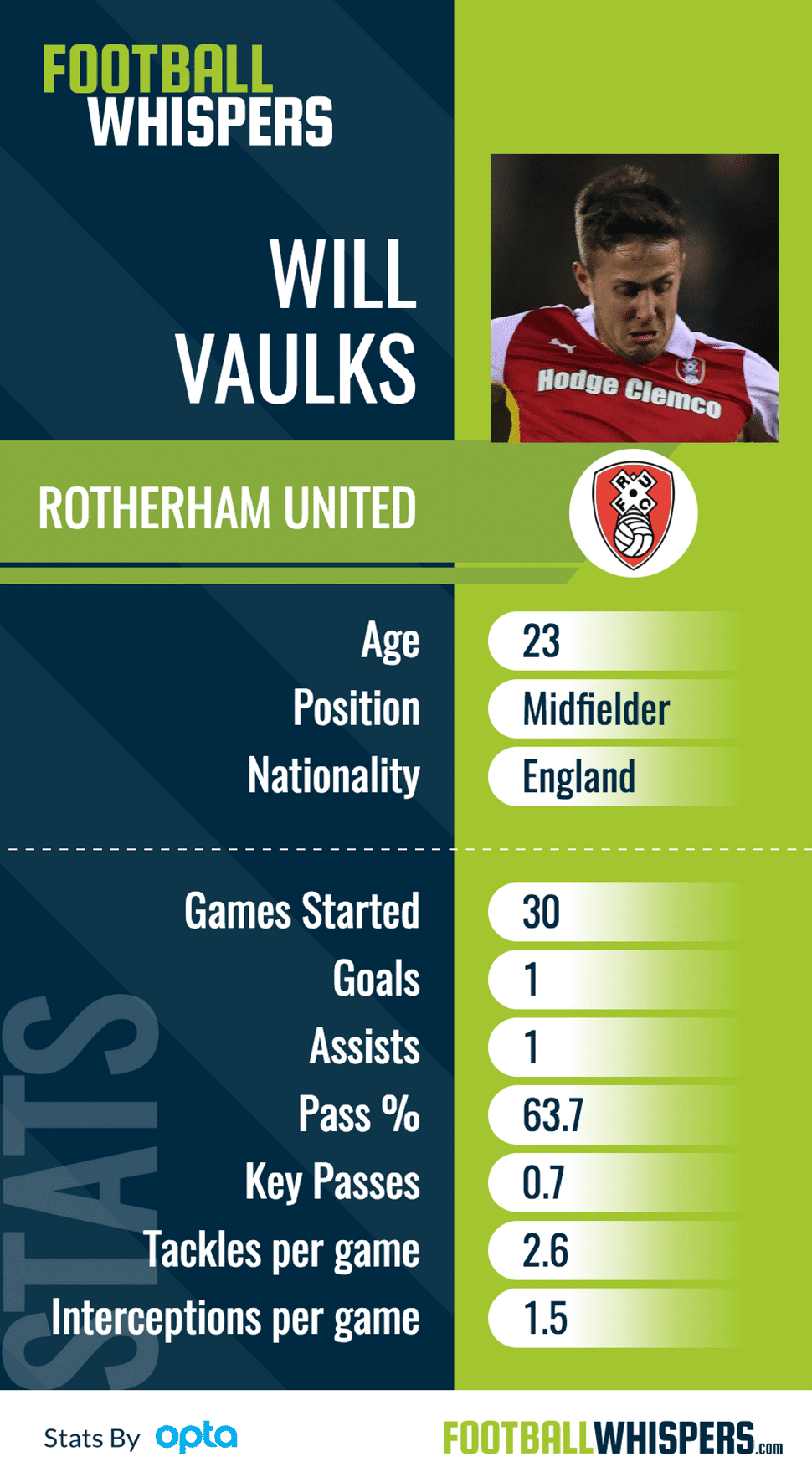 Vaulks' biggest strength is his tackling. In the still below, against Birmingham City, he spots the free player on the edge of area and shoots out the make a perfectly-timed sliding challenge. 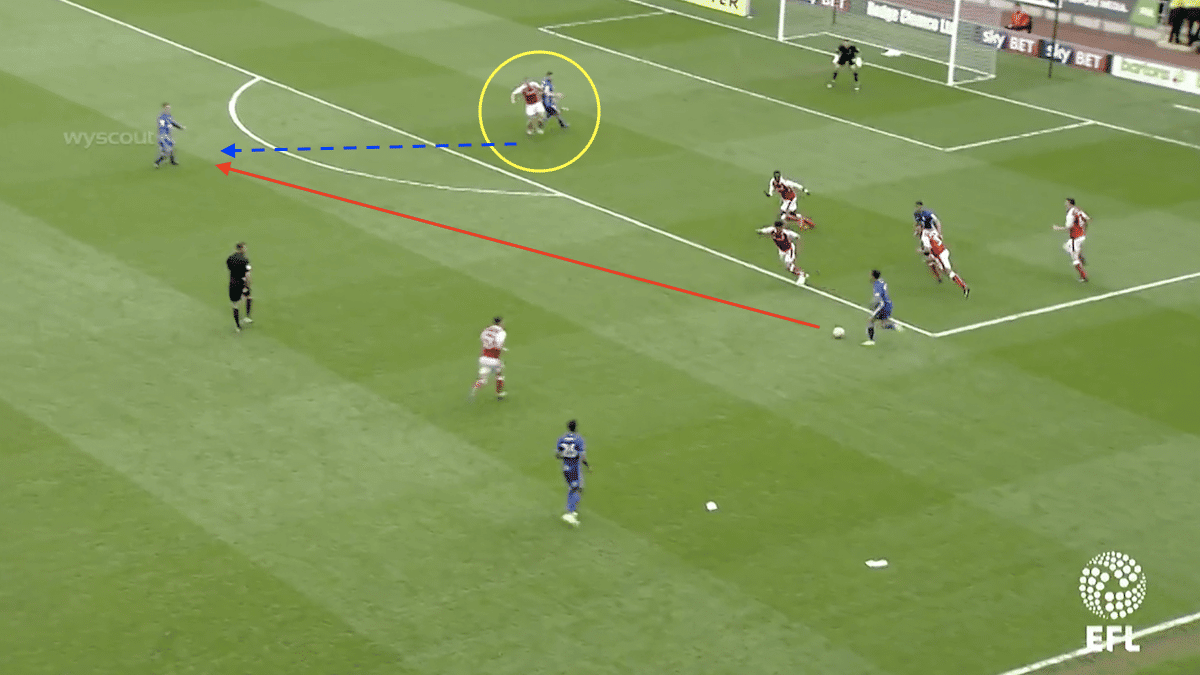 In another game, against Wigan Athletic, the ball breaks loose and it is Vaulks who, again, reacts quickest to push out and win the ball with a thundering tackle. 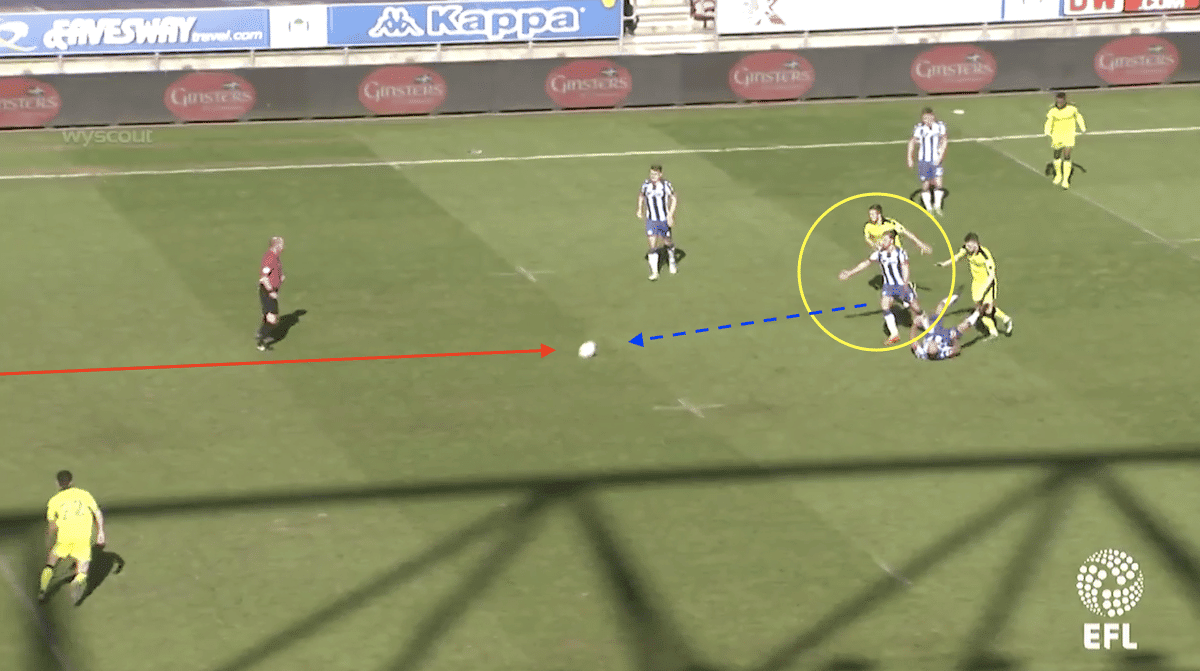 It is Vaulks' reading of the game and anticipation which enables him to make as many tackles and get through as much work as he does. In the still below, against Preston North End, he reads the pass and closes down Daniel Johnson player waiting to receive the ball with a well-timed challenge. 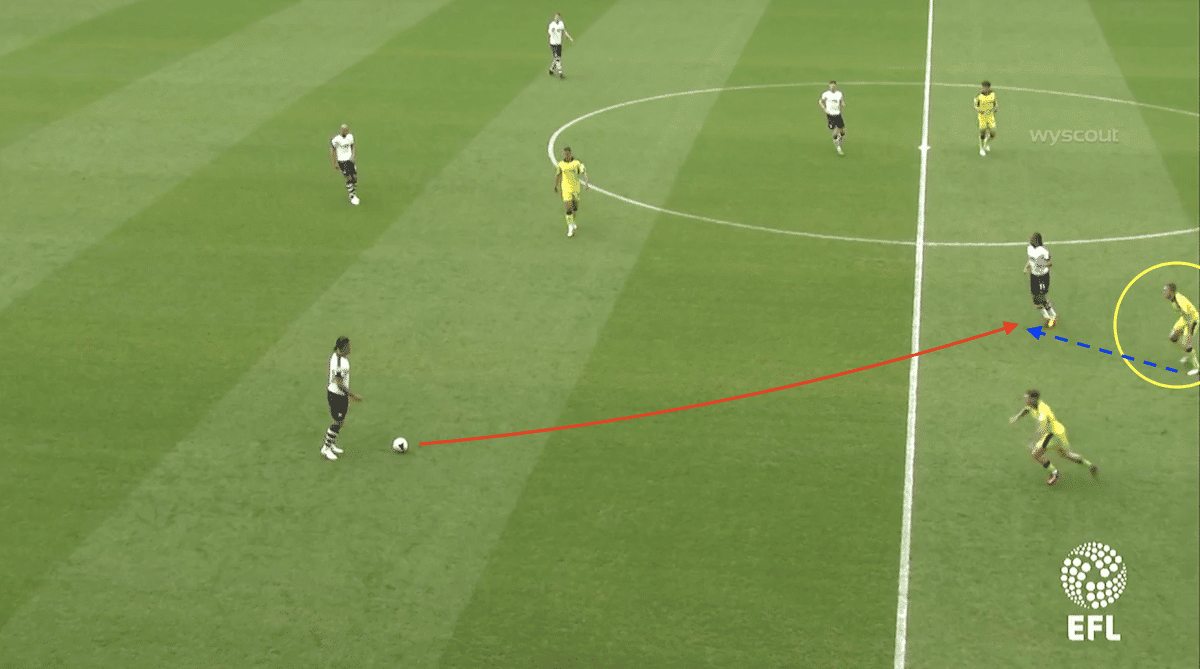 Once he's won the ball he uses it will too, just don't expect a great deal of flair from him. In the still below, from the Wigan game, Vaulks picks up the ball just inside his own half and, under pressure, whips a first-time ball down the left-channel for his team-mate to chase. 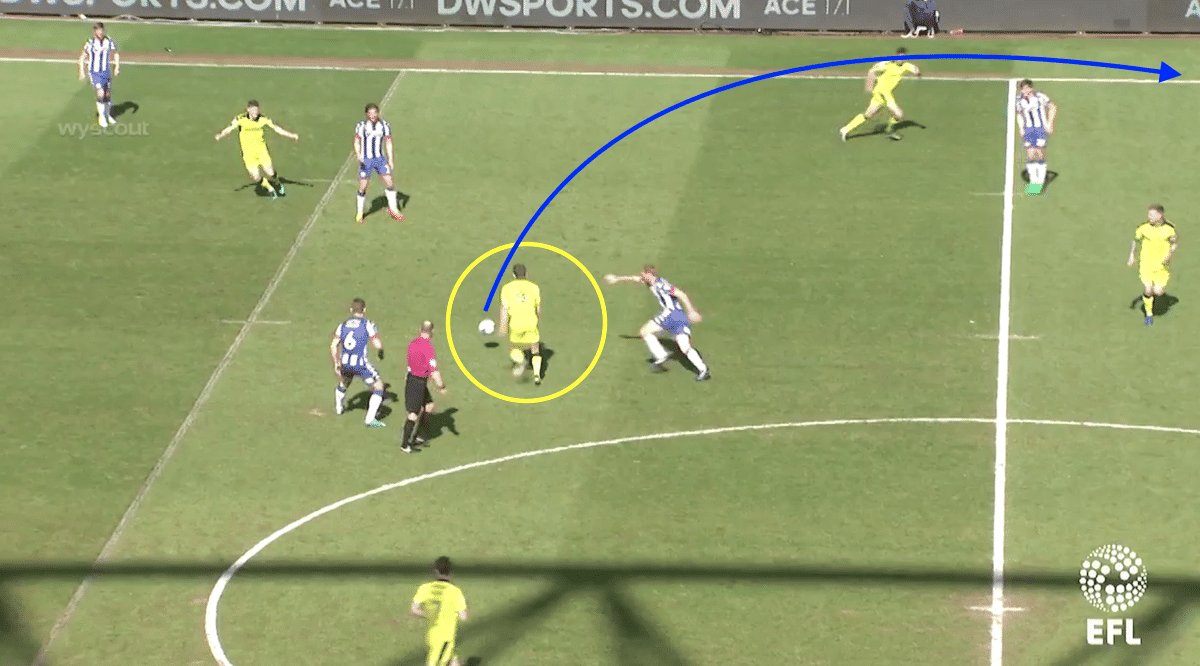 Although he reads the game quite well and recovers to get himself into position, Vaulks' big drawback is his positioning. He is caught out of position or too high up the field too often.

In the clip below, at Preston, he is caught following the ball and dragged into the box where he is doing nothing. In actual fact, he should be on the edge marking the Preston player circled in red. It is a let off for Rotherham as the cross is delivered into the middle. 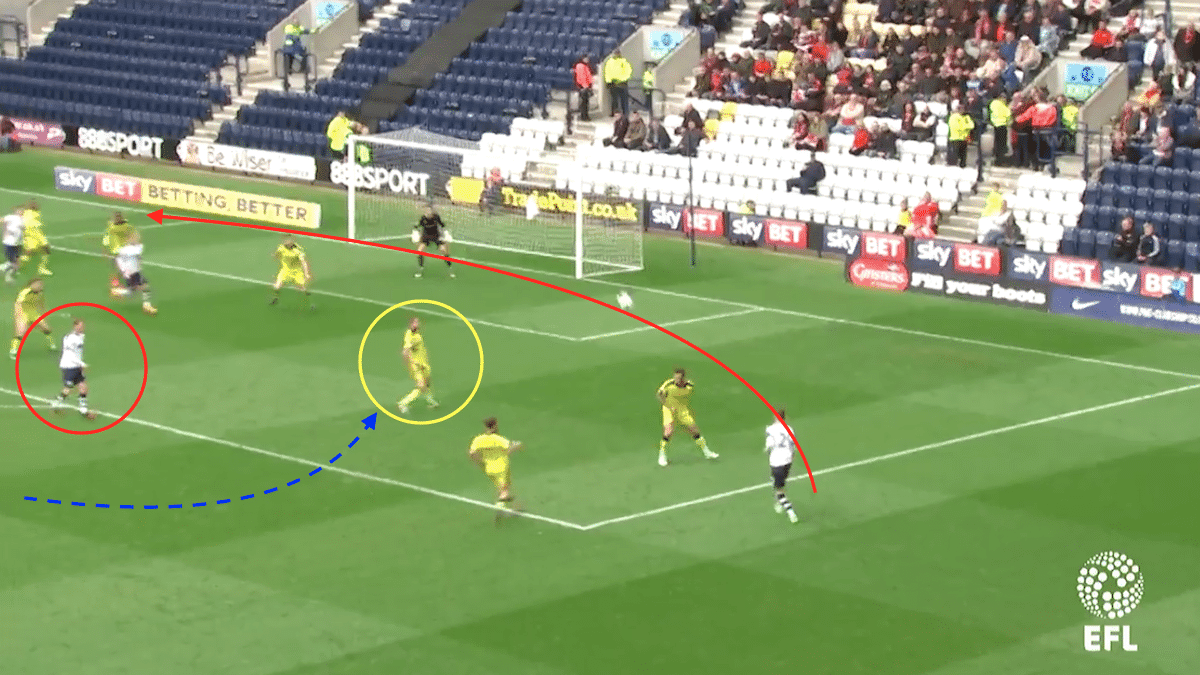 In the next image, taken against Reading, Vaulks is directly responsible for conceding a goal as he fails to follow his man properly. When the ball goes wide he does not track, or is not alert to, the run of John Swift and it is the former Chelsea youngster who finds space to score at the back post. 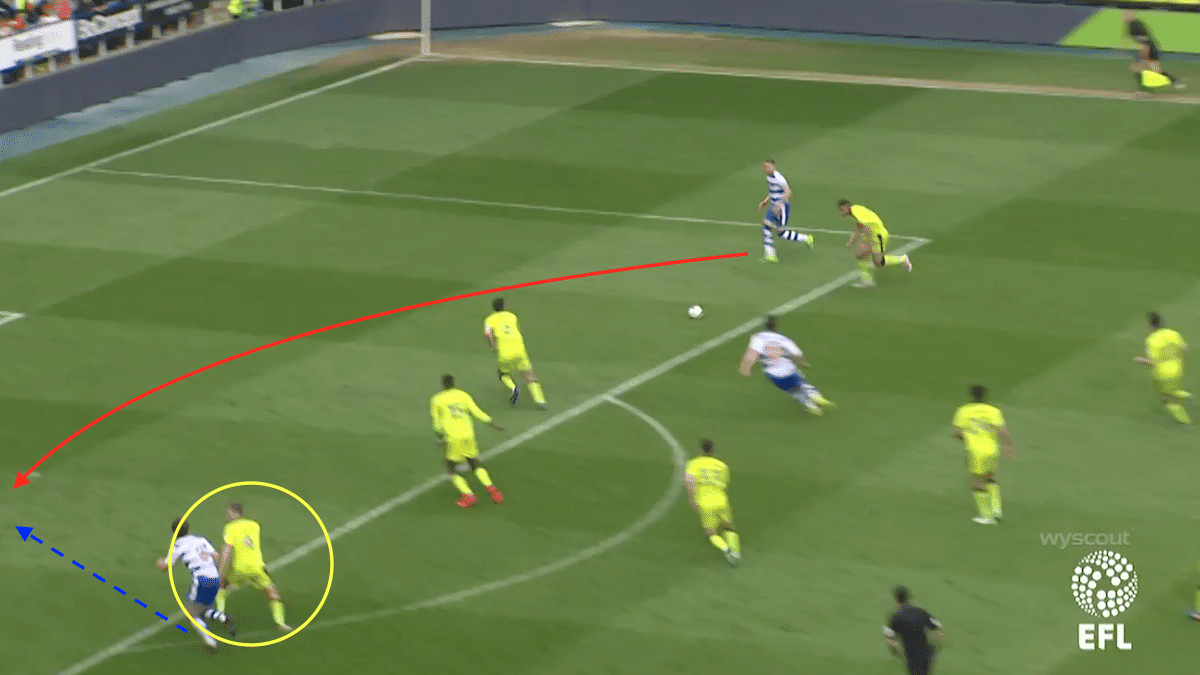 Given that the still above shows Vaulks looking directly as Swift it is evident he saw the Royals' goalscorer but simply failed to track his run. He is not the quickest either and that has been highlighted in the Championship having moved from Scotland's second tier.

Rangers' need for a holding midfielder is great. There is no guarantee of when Rossiter will be back and even when he does return he is the only naturally defensively-minded in the Gers squad.

While Vaulks' lack of positional awareness should be of concern his anticipation and reading of the game go some way to atoning for that shortcoming. And, if he were to move to the Scottish Premiership where the pace is slower than the Championship, he would not be exposed as badly.

He has shone in a poor Rotherham team and in joining Rangers he would be signing for a side who enjoy more of the ball than a lot of their opponents.

Falkirk assist James McDonagh believes Vaulks would be a good signing for the Gers. He told the Scottish Sun: “Will has all the attributes and can definitely play at a good level up here in the Premiership.

“I don’t know where he will go next, but there were a couple of teams sniffing about him when he was here at Falkirk, teams in the English Championship and from the Premiership.”

The real question is over the reported £400,000 fee. Rotherham, according to transfermarkt, paid more than that for the 23-year-old. Whether that would put him within Rangers' price range is doubtful.