Sometimes derby matches can fail to live up to the hype. Neither side want to lose and, instead of looking to win, are content with playing out a drab 0-0 draw. This wasn’t the case today in the Glasgow derby. Both sides played their part in a five goal thriller.

Rangers scored inside of two minutes with Josh Windass capitalising on Dedryck Boyata‘s indecision on the ball only for parity to be restored by a wonder strike by Celtic’s Tom Rogic. The home side managed to retake the lead after Daniel Candeias fired home after superb work down the left by Declan John.

Moussa Dembélé then showed ice cold composure to loft the ball over Wesley Foderingham to equalise in what could be described as the opposite of a stereotypical Celtic goal under Brendan Rodgers.

Scott Brown’s punt forward caught the Rangers defence out and the Frenchman was alive enough to loop the ball into the empty net. All of this before half-time.

Jozo Šimunović was then sent off for a stray elbow and Rangers pressed for a winner. With the home side pushing on for a winner it was Celtic who took the lead for the first time in the match.

Dembélé slipped in Odsonne Édouard, a second half substitute, who curled home what turned out to be the winner past Foderingham. The on-loan Paris Saint-Germain forward continues to impress and Celtic should be doing all they can to make sure he stays in Glasgow for the foreseeable future. He's now a cult hero.

Rangers, in the 88th minute, looked as though they'd worked an equaliser. Alfredo Morelos found himself with an open goal inside the six-yard area but managed to hit the post before Scott Bain leapt onto the ball. It was harder to miss.

Rodgers' men are now nine points clear at the top of the Scottish Premiership now.  Here are five things we learned from a frantic Glasgow derby.

The Rangers attacker bagged his sixth goal in his last five Scottish Premiership starts and it was all his own doing. He forced Boyata into a mistake and then raced clear into the Celtic penalty area. He then calmly lashed the ball past Bain to give Rangers a dream start.

It was a confident goal from a player in the best form of his life. The 24-year-old had a patchy start to the season but his goal against the Hoops was his 17th of the season in all competitions and now means he’s been involved in 25 goals in 26 starts. If he carries on like this then Rangers will have a task on their hands to keep him at the club in the summer.

Preston North End and Leeds United had bids rejected for the former Accrington Stanley wide forward. Bigger clubs might come knocking when the season comes to an end.

The former Manchester City man had a match to forget. The Celtic No.20 was caught cold after two minutes and in the process played a huge part in Rangers taking an early lead.

This can happen, especially to players who have missed a lot of football through injury. The problem, however, was the fact the Belgian defender didn't up his game after the early set back. He was caught dawdling on the ball a few times throughout the match.

It was a clear tactic and Rangers had a lot of joy from doing this with Morelos getting in on two separate occasions through this route. Fortunately for the away side they weren't punished but it has to go down as something Boyata, Celtic and Rodgers got away with.

There may have been a thought that a Glasgow derby might've come too soon for Jack Hendry but after coming on as a substitute he looked more composed than his more experienced team-mate. It's one for the Celtic manager to weigh up moving forward. 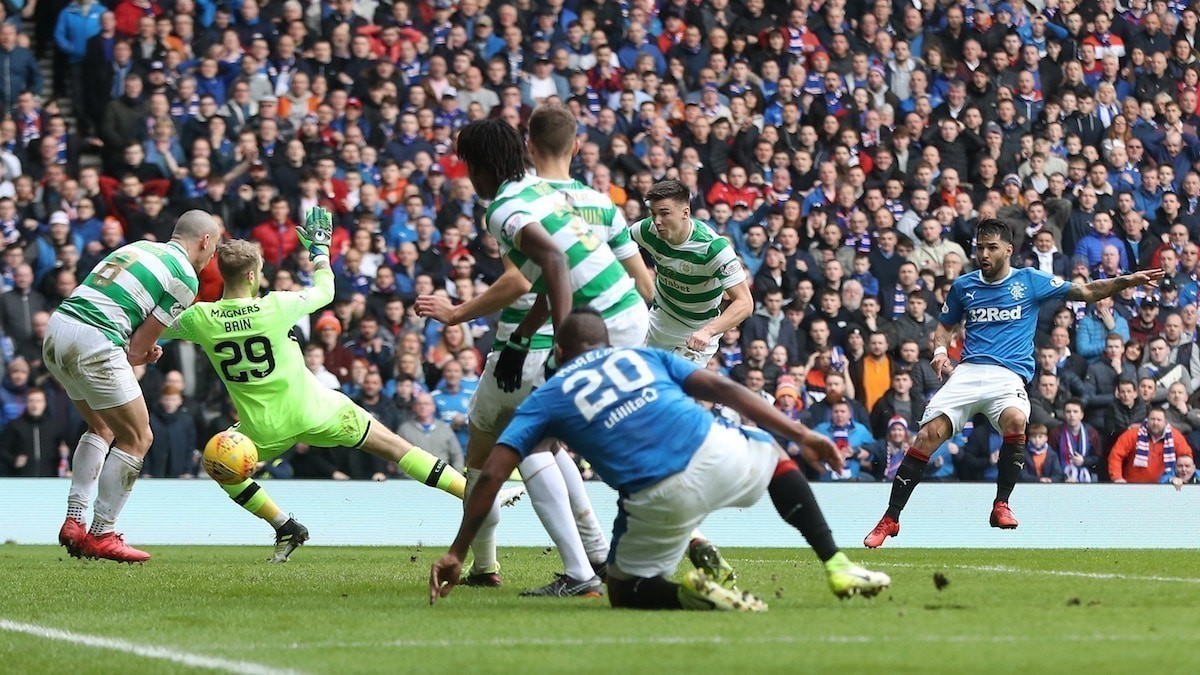 Rangers struggle to pace themselves

In the first half Rangers looked rampant. They played the game as though it was a cup match, giving Celtic absolutely no time on the ball and looking to dictate the tempo.

Graeme Murty's men wanted to blitz the away side and, to their credit, it appeared to be working in the opening 45 minutes. Celtic looked rattled and sluggish.

They couldn't match Rangers and they weren't able to move through the gears. The home side pressed high and looked to stretch the play in an attempt to isolate Dembélé. Again, it worked. The Gers kept catching Celtic on the counter in what was quickly becoming a game in perpetual transition.

You could tell Rodgers’ team weren’t used to playing against such high intensity and they were caught on the ball a number of times.

But Rangers weren't able to keep the tempo going for the entire match, as many expected, and as soon as they tired it was a game that Celtic easily controlled.

The home side, unable harass their visitors, struggled to create anything of note after Šimunović was shown the red card.

Clinical Dembélé is the difference maker

The 21-year-old turned the game on it's head. He netted the equaliser, his sixth goal against Rangers, and then assisted Édouard's goal. And this in a game he wasn't given much service or support.

It's a sign of a top striker when they can be on the peripheral for the most part yet still play an important part in your team picking up all three points. His counterpart, Morelos, was much more involved in the match but when he was presented with his best chance of the game he fluffed his lines.

In big games you need ruthless player. Celtic had one while Rangers didn't and it's why the away side returned to Parkhead with all three points.

Dembélé showed his class and he once again proved why he is Celtic's best attacker, as revealed in a recent feature on the Football Whispers website. 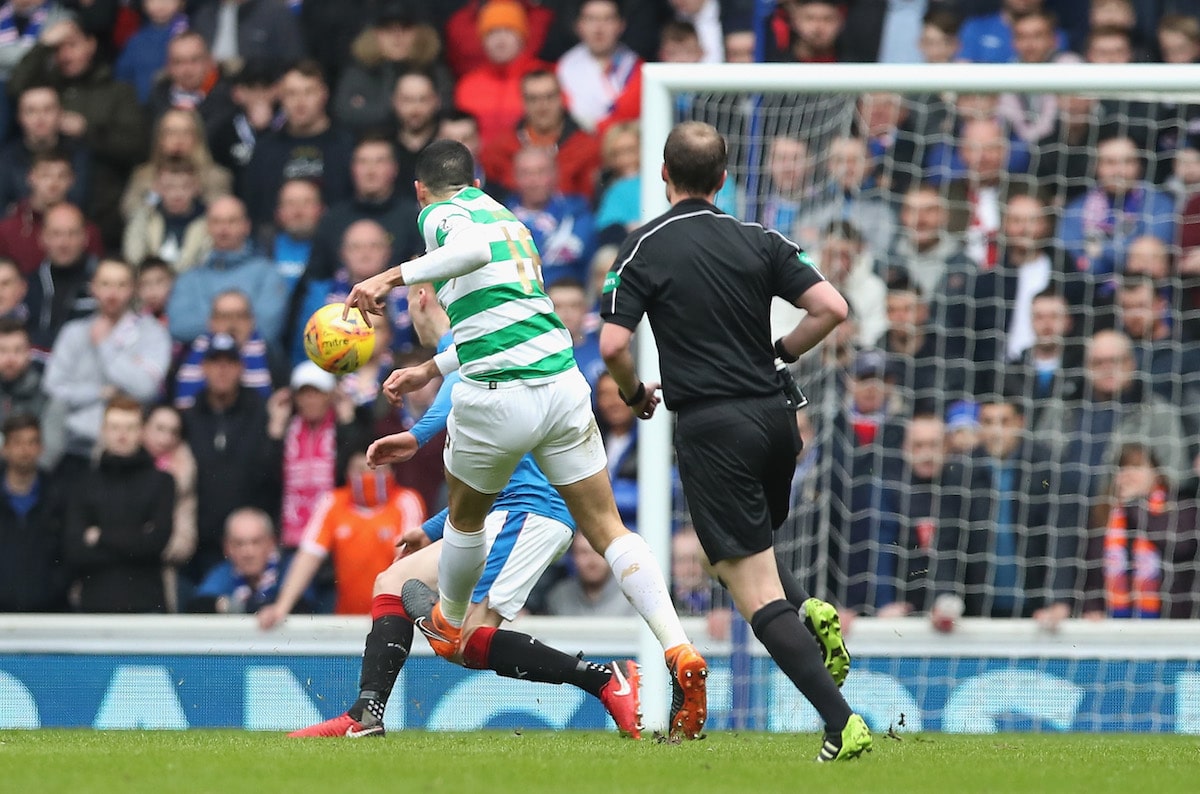 Bain makes a name for himself

The on-loan Dundee goalkeeper was making his debut for the Hoops in what was their biggest game of the season. The 26-year-old didn't have much time to prepare for the big day, only finding he'd be starting after Dorus de Vries failed a pre-match fitness test.

The debutant hasn't had the best of times at Ibrox in the past and must've been fearing the worst when he was picking the ball out of his net after just two minutes. But, to his credit, he didn't let it have a negative impact on his game. He showed safe hands to gather a fiercely driven ball across goal with people closing in on him.

He then parried away a Morelos effort and caught a ball just under his crossbar. Not done there, the goalkeeper made a match winning save in the 88th minute to first foil Windass and then jump on the ball after Rangers' Colombian forward somehow hit the post.

As debuts go, it couldn't have gone any better for Bain.