If Arsenal are ever to return to the top under Arsène Wenger, the Gunners boss must put loyalty to one side and move on underperforming stars.

Sticking by a player is an admirable quality but in an increasingly ruthless footballing world, second best just isn't good enough and won't be accepted by supporters.

Billed as a future world-class star when he moved to north London as a 17-year-old from Cardiff City in 2008, the Welshman has had a mixed nine years.

The low point was the horrific leg break he suffered in a game at Stoke City in 2010. The injury kept him out of action nine months and meant the Welshman had to go out on loan to Cardiff City and Nottingham Forest to gain vital minutes in his recovery.

It took a few years but Ramsey regained his form and, in the 2013/14 season, struck ten league goals despite injuries restricting him to 23 Premier League appearances. He also netted the winner in the FA Cup final against Hull City capped to cap off a sublime year.

That could and should have been his springboard. It turned out not to be the case.

In the three campaigns since Ramsey has scored just seven Premier League goals. This season he netted once, and it came on the final day of the season in what was effectively a dead rubber against Everton.

For an attacking midfielder, who by his own admission harbours ambitions to play for Barcelona, such a poor return should not be tolerated. But it isn’t clear whether he is under any pressure to up his performances by way of a threat of being sold. 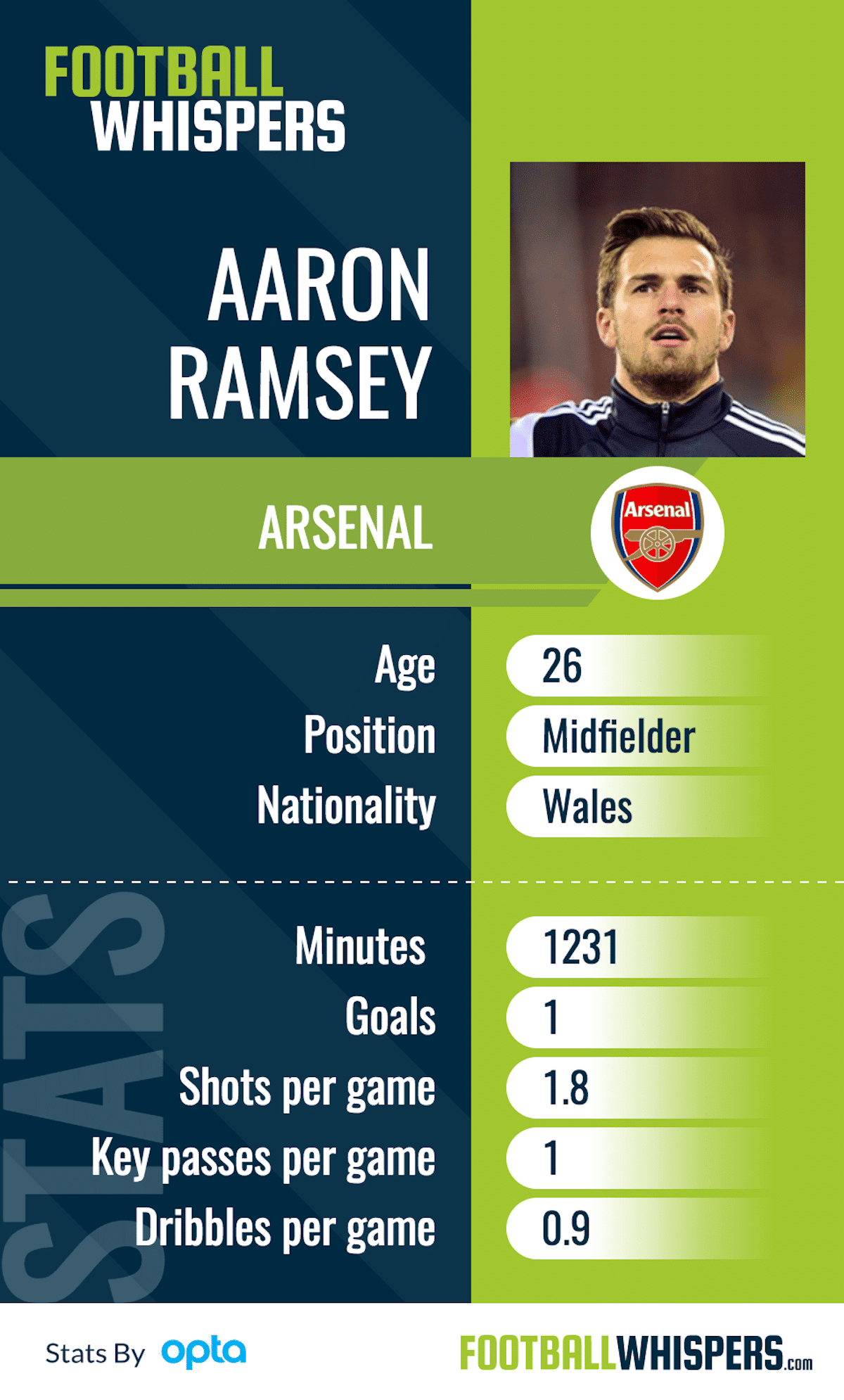 Read More: Five Strikers That Arsenal Should Target This Summer

Wenger’s men may have picked up some form towards the end of the term but it was too late. Results like the 3-1 defeat to West Bromwich Albion in March summed up the team as a whole but also another issue with Ramsey.

On that day at the Hawthorns, Arsenal played over 700 passes and kept 77% possession but 90 per cent of the balls played were either sideways or only went five metres.

Ramsey’s passing accuracy was at 88 per cent. But he only took the ball on once and created one chance for a team-mate.

These stats not only point to Arsenal’s issues, but also how much of a drawback Ramsey is in comparison to previous midfielders under Wenger. Two players sum up the best of the two kinds of team the Frenchman has built since 1996, Patrick Vieira and Cesc Fàbregas.

Vieira epitomised the mix of pace, power, strength and technique his side had, while Fàbregas led by example, taking games by the scruff of the neck by scoring and creating goals in a style easy on the eye.

Now at Chelsea, Fàbregas wracked up 12 assists this season, three times as many as Ramsey, despite being largely ignored by Antonio Conte for part of the season and playing just six more games.

Issues at Arsenal are much deeper than Ramsey’s form and statistics but they are just one example. Wenger is proving too loyal to his players and this season, despite having the opportunity to win a third FA Cup in four years, is the result of that. 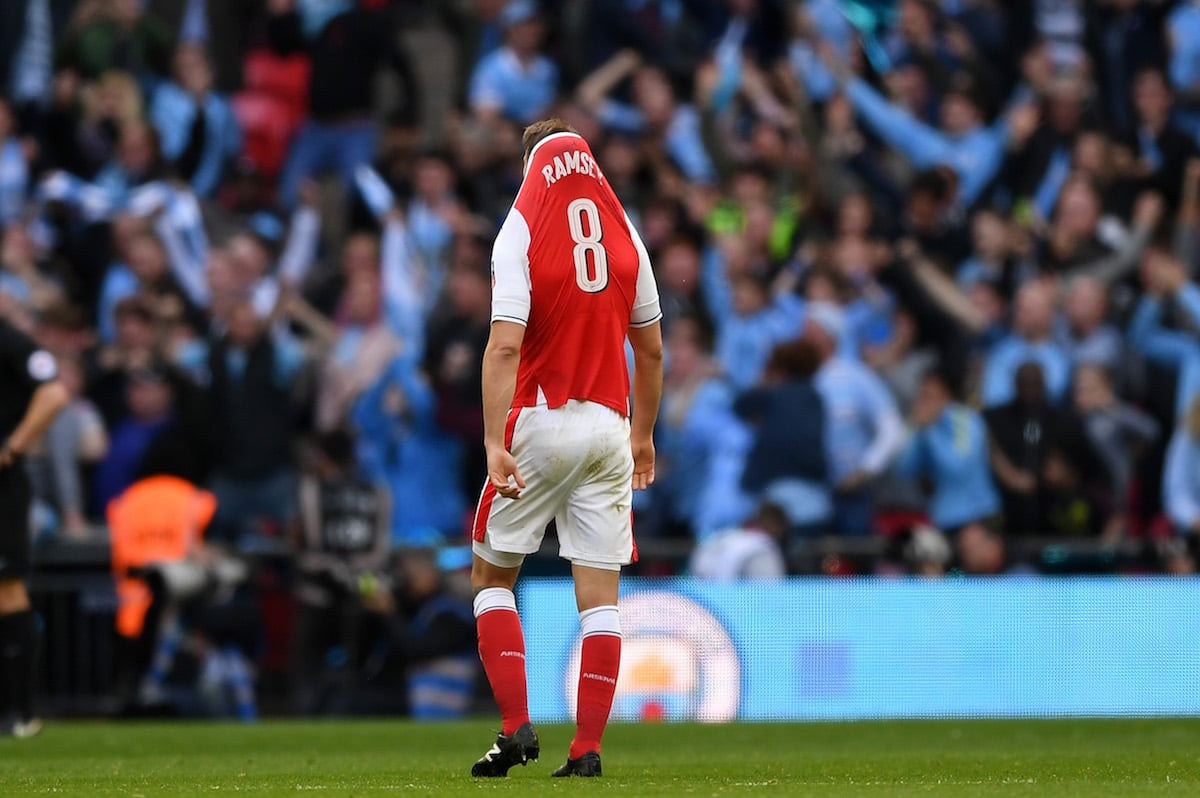 Conte’s attitude towards Fàbregas is just the tip of the iceberg at Chelsea, with the Italian, as well as Pep Guardiola at Barcelona, Bayern Munich and now Manchester City, not afraid to cast aside a player if they are not performing to the required standard.

Time for a change

For years, Arsenal have been told they must sign a quality goalkeeper, central defender, commanding and dominating midfielder and a proven top-class striker. In the last two transfer windows, Petr Čech, Shkodran Mustafi and Granit Xhaka have arrived to fill three of those positions. But the team has gone backwards.

Wenger, who’s contract expires in a matter of weeks, can say he has answered his critics in recent years by spending money on players. But the issue is those new signings are being supplemented by the likes of Ramsey, who have not been earning their place in the team and would be long gone if at any of the clubs who finished above Arsenal this season.

Ramsey has talent and there would be interest from at home and abroad were he to be made available this summer. The chances of him getting a better offer than Arsenal are slim, though.

Missing out on the Champions League could be a much-needed wakeup call for the club or a complete disaster. If Wenger decides to stay he must change his approach to transfers, starting by cutting the likes of Ramsey adrift and rebuilding from the bottom.