If Southampton manage to trade in Mark Hughes for Ralph Hasenhüttl, it could be the best deal the club has done since buying Virgil van Dijk for £13million from Celtic. Or bringing in a little-known (on these shores) Toby Alderweireld. Or a little-known Sadio Mané. Or a little-known Mauricio Pochettino.

Southampton haven’t done a deal as good as those in a few years, which may be why three successive managers have failed to impress.

Austrian Hasenhüttl has emerged as the Saints’ the headline ‘New job for Ralph Hasenhüttl’.

After a reasonable if unspectacular career as a striker — he scored three in eight appearances for the Austrian national team — he first came to prominence as the manager of Ingolstadt.

At the little Germany club he oversaw a remarkable rise, from bottom of the Bundesliga 2 to promotion to the top flight in two seasons. In 2015/16 he safely securing their Bundesliga status by finishing 11th.

RB Leipzig were newly promoted in the summer of 2016, and Hasenhüttl saw an opportunity. His decision to leave Ingolstadt for the controversial club was vindicated, as they finished second in 2016/17, their first ever in the top flight. After finishing sixth in 2017/18, a relative disappointment, he decided to leave the club.

Is it possible to mention Hasenhüttl without mentioning Jürgen Klopp? Probably, but it’s rare.

At times, the Austrian has shown signs of discontent about the comparisons that have followed him for half a decade, since they were managing in the Bundesliga at the same time.

“The comparison annoys me,” Hasenhüttl told BILD in 2014. He wants to be known as “Hasenhüttl, not Klopp.”

The pair know each other well, in addition to having a similar philosophy on football.

“[Klopp and I] did our coaching badges together and we know each other very well,” Hasenhüttl told bundesliga.com.

“I think we appreciate a similar philosophy on football – we want to play a high tempo game, we want our guys to sprint around, press well and these are elements which make the game livelier and varied and get people excited.”

How would it suit Southampton?

Southampton aren’t as young or fast as Leipzig, but a lot of Hasenhüttl’s coaching is about tactical principles, as well as the physical fitness required to press relentlessly and counter quickly.

On counter-attacks, Leipzig kept their players spread across the width of the pitch, wherever possible keeping one and only one person vertical columns of the field. These are the wings, the half-spaces — usually considered to be the width from the edge of the eighteen-yard box to the edge of the six-yard box — and the centre. Take a look at the examples in this video.

Keeping good distances between them helps keep options open while also avoiding a situation where several attackers can be covered by a single defender.

Shane Long may well come into his own as the man to finish off these moves, while Nathan Redmond could also benefit from this style. The squad has plenty of talent, and even though Southampton are down in the relegation places now, they could escape the mire with a few good performances. 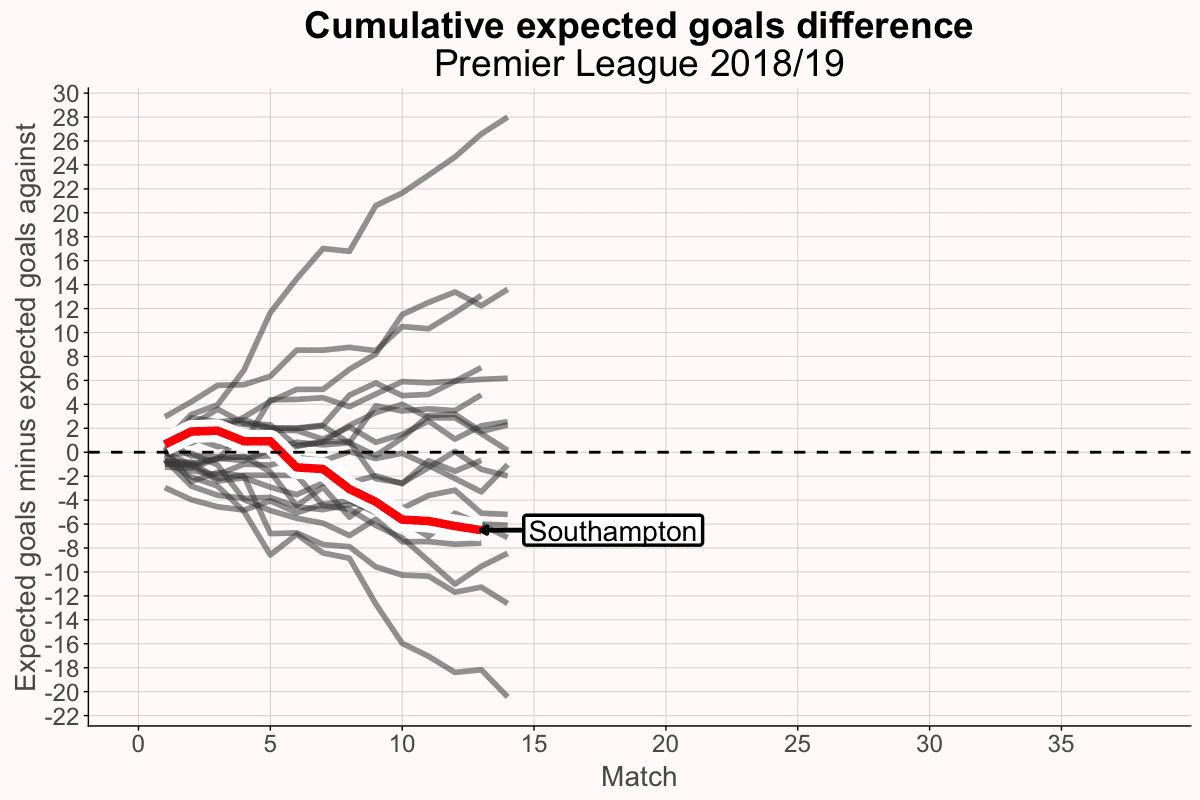 They may be mentioned mainly because they’re both out of work and have managed in the Premier League before. The Times recently reported that Southampton’s new owner, Gao Jisheng, is wary of putting more money into the club. He’d therefore like to avoid paying a release clause for a new manager, particularly as the extension to Mark Hughes’ contract in May could lead to a not unsizeable compensation payment.

Southampton and Hasenhüttl’s former club Leipzig also have a link, as the Saints’ former head of recruitment Paul Mitchell has worked with the Austrian at the Bundesliga club.