When Southampton appointed Ralph Hasenhüttl in December they made a welcome return to the principles which had served them so well in recent years.

A modern, forward-thinking coach with a strong philosophy, the Austrian was everything his predecessor, Mark Hughes, wasn't. To give the former Saints striker his dues, he had served his initial purpose – namely keeping the Saints in the Premier League at the end of the 2017/18 season.

But it quickly became apparent Hughes was not the manager the South Coast side needed.

Hasenhüttel arrived with a big reputation having overseen the ambitious project at RB Leipzig between 2016 and 2018, guiding the unpopular side to second place in their first-ever Bundesliga campaign before following that with a sixth-place finish.

Southampton's safety was confirmed with a record of eight wins from 23 games and the ‘Alpine Klopp' was rightly lauded for the transformation job he'd overseen at St. Mary's. Hopes for the new campaign were high.

But Southampton have yet to click. Four defeats from their first seven represent an underwhelming start to the season and Hasenhüttl will have been raking over the footage and data to get to the root of their problems.

Chief among them is their failure to capitalise on the chanced they carve out. Southampton are seventh in the Premier League for Big Chances created per 90 (1.86) yet they are fifth for Big Chances missed (1.71) – an astonishing rate of profligacy.

Thanks to its size, Hassenhüttl was unable to completely overhaul the Saints' squad this summer. But one area which did receive particular attention was the striking department. Danny Ings made his loan switch from Liverpool permanent at a cost of £20million while Ché Adams arrived from Birmingham City after hitting 22 goals the previous season.

However, Adams is yet to get off the mark for Southampton despite starting six of their seven fixtures. That isn't entirely unsurprising when you consider his seasonal expected goals total stands at just 1.94. 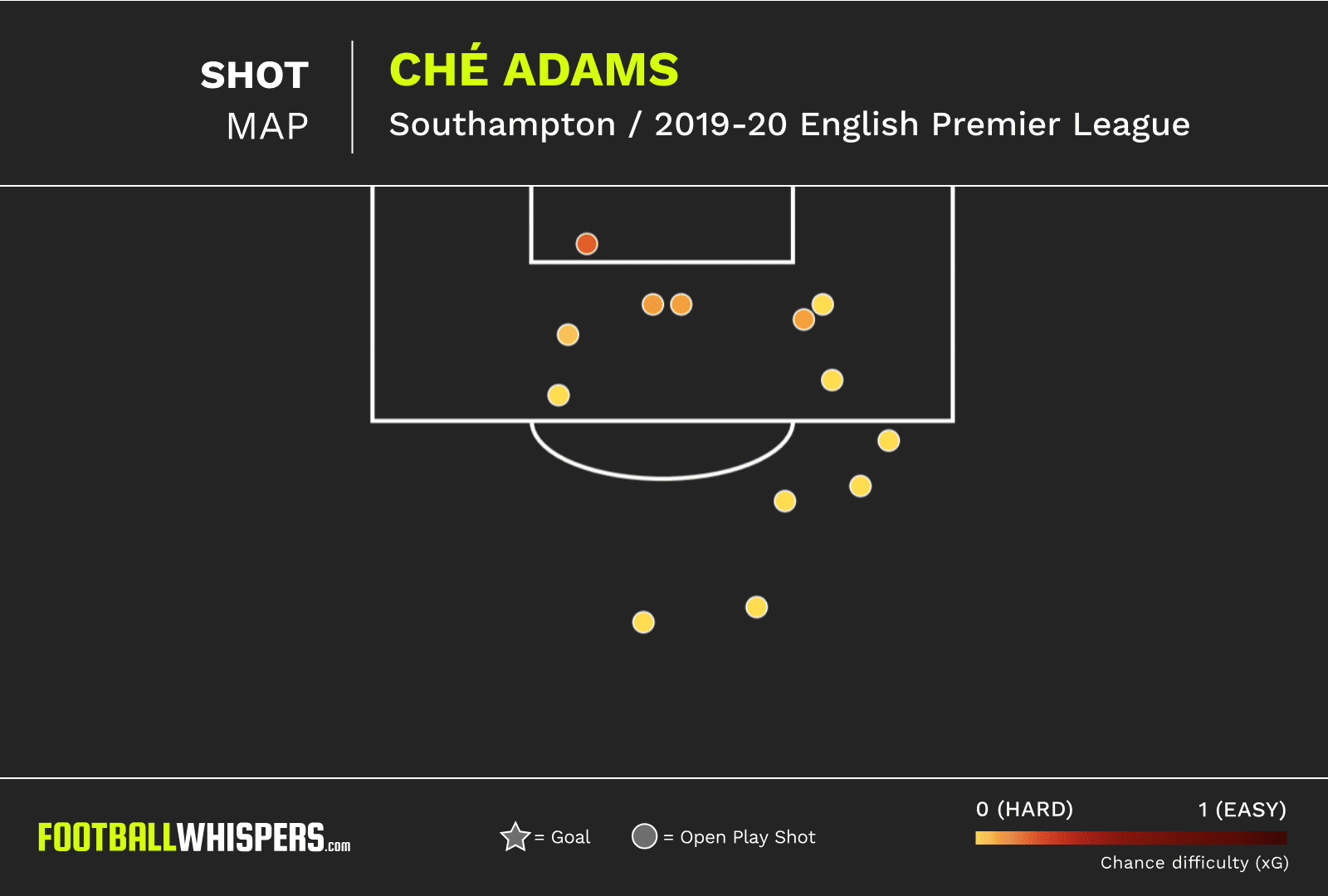 And, when you analyse his shot map for the season so far, he's only had three efforts which would fall on the ‘easier' end of the scale – only one of which came inside the six-yard box.

After Ings bagged a brace in Southampton's 4-0 thrashing of rivals Portsmouth in the Carabao Cup, Hasenhüttl suggested he might take Adams out the firing line for the trip to Tottenham Hotspur. And he did just that.

“Strikers are always working hard for the team and helping the team to win. Ché did this very good in the last game,” the Austrian told the Daily Echo.

“In the end, it’s also about scoring and he had a lot of chances to play and when the others are scoring more at the moment then it’s maybe when we change something and someone else gets the chance.

“But that’s only for the moment. Once the first pressure is off then maybe it is easier for him to come back.”

While Adams hasn't had many presentable chances fall his way, the same cannot be said of Southampton as a whole. Looking at the team's xG map, a high volume of their attempts on goal have come from range. In fact, they are also fifth for efforts from outside the 18-yard box (6.14 per 90).

To some extent that could be explained by the fact Southampton complete the fifth-fewest passes in the final third (79.29) per 90. 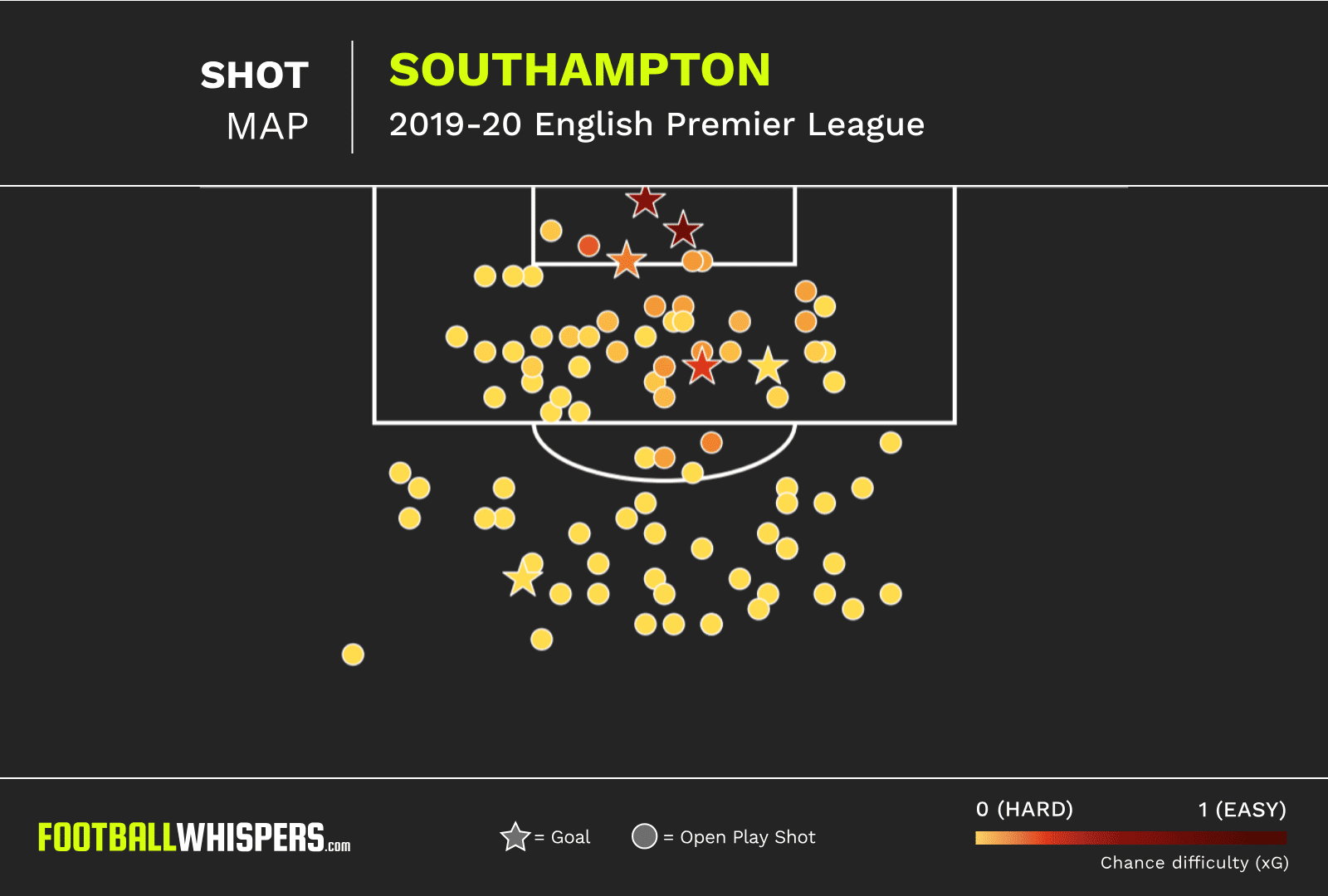 Despite that, we can see from the shot map above that Hasenhüttl's side still take a high volume of shots from inside the penalty area – the seventh-most (4.28), in fact.

Something, then, has to change if Southampton are to avoid a repeat of the last few seasons and steer clear of another relegation battle. What should help – assuming he can maintain his early form – is the reintegration of Sofiane Boufal.

The Morrocan was one of a clutch of players who looked set to depart St. Mary's this summer as Hasenhüttl attempted to shrink his bloated squad and raise the funds to bring in the players he wanted.

But Boufal was one of a number who failed to secure a move away. The reason that might prove significant is the precocious wideman has created more Big Chances for the Saints (3) than anyone else this season. That despite playing just 361 minutes so far.

He spent last term on loan at Celta Vigo before returning to the South Coast this summer and told the Daily Echo he had never wanted to leave Southampton.

“It was a meeting where it was just about his philosophy and what it’s like to play in his team and everything else,” Boufal said of his introduction to the Austrian.

“I wasn’t nervous [to meet Hasenhuttl] because I was very, very focused on staying here – even if some other club wanted me. I didn’t want to move and since the first day, I have been very focused.”

Both player and coach will hope the former Lille attacker makes good on his undoubted talent. His Goal of the Season contender against West Bromwich Albion in 2017 a stark reminder of his quality. And the Parisian should take heart from the way Hasenhüttl has rejuvenated Nathan Redmond's Saints career.

The winger-cum-forward has been arguably the biggest beneficiary of the Austrian's attention on the training ground, going from flaky and inconsistent winger with no end product to difference-maker and attacking leader for the Saints.

From the start of last season until Hughes was sacked at the beginning of December he failed to score or assist in the Premier League. Since Hasenhüttl came in, he's netted seven times and supplied four assists.

While that could be viewed as a negative, it actually points to a new role within the team and an increased level of maturity and football intelligence, using the ball with great purpose and responsibility.

If Hasenhuüttl can perform a similar reclamation job on Boufal, the pair could go a long way to solving the Saints' issues in front of goal.