Rakow Czestochowa welcome Warta Poznan to the Miejski Stadion Piłkarski Raków on Friday, July 15th. The new Ekstraklasa campaign kicks off this week when Rakow take on Warta. Read our free predictions and find the latest odds for the fixture below in our detailed match preview.

Rakow Czestochowa are targeting their fifth straight victory over Warta Poznan in Friday’s Ekstraklasa opener. Read our top three predictions for this week’s fixture below.

Last season’s runners-up Rakow Czestochowa are aiming to go one better this season and they look ready to kick off the new Ekstraklasa campaign off with a win when they take on Warta Poznan on Friday. Rakow have enjoyed victories in each of their last four meetings with Warta and having lost just one of their last 23 assignments at the Miejski Stadion Piłkarski Raków, the hosts can be backed with confidence to prevail again.

Rakow Czestochowa have won each of their last four encounters with Warta Poznan and each of the last three of those victories were accompanied by at least two goals. Only two clubs managed to notch more goals than Rakow last term and they have the firepower to hit the ground running against Warta on Friday. With that in mind, bettors are advised to consider backing Czestochowa to net over 1.5 times in the team goals market.

View our selection of the best stats for Friday’s match below alongside a tool to help you choose the best odds.

Read all of the injury updates and team news for Friday’s Ekstraklasa encounter between Rakow Czestochowa and Warta Poznan below.

New signings Fabian Piasecki and Stratos Svarnas will be hoping to make their debuts for Rakow Czestochowa on Friday. Daniel Szelagowski and Iwo Kaczmarski will also hope to feature having returned to the club from loans. There are few injury issues to report, so expect to see a strong XI.

Warta Poznan had a quiet time in the summer market, though new centre-halves Dimitrios Stavropoulos and Kamil Koscielny will hope to see minutes for the first time on Friday. Warta lost striker Frank Castaneda to Buriram Utd during the window and the Colombian's thrust in the final third will be missed. 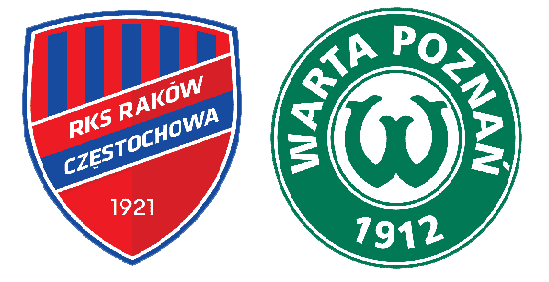