Raja Casablanca and ES Setif play their last group stage match on Monday morning. This fixture will decide which side tops Group B in the 2022 CAF Champions League given that only three points cushion table toppers Raja Casablanca against second-placed, ES Setif. Read our analysis for more details and free predictions for this game.

Raja Casablanca and ES Setif meet for the fourth time. All the previous duels were in the CAF Champions league tournament, including the reverse game that ended in favour of Raja. Our best free picks for this game are:

Raja Casablanca is our favourite side to get the three points in this CAF Champions League duel. The hosts have a better record heading into this match. They lost only once in the last seven games, won six, five of which were clean sheet wins. After losing 1-0 in the reverse fixture, we don’t think Algeria’s ES Setif has a chance in this trip to Morocco. Our tipsters are backing a hard-fought victory for the hosts.

The second leg of the CAF Champions League group stage fixture between Raja Casablanca and ES Setif will be a battle for supremacy. The current occupier of top spot in Group B is Raja but they risk losing that spot if this game doest end in their favour. We think this will be a difficult game and it could end with a few goals.

Checkout the following stats and also place your bet on the highest prices across selected bookmakers in the tables below.

This will be a hard-fought duel between Raja Casablanca and ES Setif as it involves claimer for the top spot in CAF Champions League group B. The hosts currently lead the group with 12 points after getting four wins and losing one game so far in the competition.

On the other hand, Algeria’s ES Setif is second with nine points and could make a stab for the top spot. All in all, both teams have qualified for the knockout stages. A stronger defence on the hosts’s side could, however, be the biggest challenge for ES Setif.

In the previous three meetings, a total of nine goals were scored. The first two meetings ended with a similar scoreline of 2-2. However, ES Setif could not convert their chances in the third encounter which they lost 1-0 despite dominating the game with 62% ball passion.

Home advantage is always an important factor in the CAF Champions League matches, so handing Raja Casablanca a headstart in this game is another way to look at it. 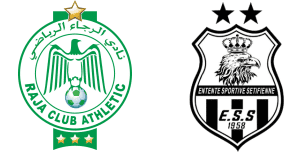 Who are the hosts in this CAF Champions league group stage game?

Which side has scored more goals in this tournament?

Both teams have scored 6 goals in five games.