Morocco’s Raja Casablanca will square it out with South Africa’s AmaZulu in this group stage of the CAF Champions League tournament. These teams haven’t met before so we expect a difficult match in which both teams will look to win their first game of the 2022 tournament.

The Best Predictions for Raja Casablanca and AmaZulu

Group B of the 2022 CAF Champions League is packed with some of the best clubs in Africa. The first Group B game between Horoya and ES Setif will take place three hours earlier. It is a battle for the top spot and consequently a place in the playoffs. Our best predictions for this match are as follows:

Our tipsters are backing a low scoreline in this game. The hosts have scored at most one goal in each of their last five games. The last four matches for Raja Casablanca ended 1-1. On other hand, AmaZulu has found goals hard to come by in recent games. The visitors scored a goal each in three of their last four games. This will be the first encounter, so we expect more of a cautious approach.

The second tip for this game is goals on one end. It could be a goal or two but don’t expect lots of goals in this game. Even with back to back losses before this match, the visitors have done well defensively in recent games. The hosts have been equally remarkable at the back, which gives us the confidence to tip a low scoreline and one-sided scoring match.

Here are the latest team stats, H2H of the last five meetings as well as the best odds from top UK bookies.

Raja Casablanca and AmaZulu will lock horns for the first time. It is a fixture that will see both teams compete for the top spot in CAF Champions League group B alongside ES Setif and Horoya.

The hosts hope they can get a win after three consecutive draws of 1-1. Dismal performances have confined Raja to only one win in the last four games. Before losing the last two games, AmaZulu had gone unbeaten in 11 games.

Losing the last two games may not have much impact on AmaZulu’s chances of winning this game. It is a different competition and we expect both sides to put in a shift for the best outcome. The visitors recorded 2W, 1D and 1L in the last five games while Raja Casablanca had 1W, 3D and 1L in as many previous outings.

Here are the predicted lineup for this fixture: 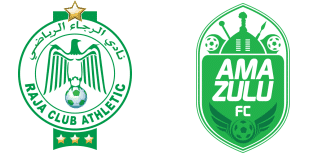 Who are the hosts in this game?