Whether or not Manchester City serve a two-year ban from UEFA competition is anyone's guess. But until the Court of Arbitration for Sport rule on this landmark punishment, speculation about the future of the club's stars – Raheem Sterling chief among them – is inevitable.

Pep Guardiola has bullishly stated his intention to remain at the Etihad Stadium, claiming he will still be in the dugout – lest he is sacked for failing to win the title – even if City start next season in League Two.

The club's players, though, have rather wisely kept their counsel. If City's lawyers can get this ruling quashed by sport's highest power, it will be business as usual. It's only if Cas uphold the punishment meted out by UEFA that the back-to-back Premier League champions have a problem.

Sterling, inevitably, is one of those who has been linked away. Talk of a switch to Spanish giants Real Madrid is far more plausible than the reports claiming Kevin De Bruyne and Aymeric Laporte could join Liverpool, though.

The England international has become one of City's biggest stars under Guardiola. In fact, it's hard to imagine anyone has benefitted more at the club from working under the Catalan than Sterling who has gone from flaky winger to ruthless inside forward in three years.

It's that transformation which has led to reports of interest from Los Blancos. And while Sterling was quick to bat the rumours away in response, he also made sure to leave the door ajar, should the worst happen.

“Right now I'm at City and I'm really happy. But I say Real Madrid are a fantastic club,” Sterling told Spanish outlet AS.

“When you see the white shirt you know exactly what the club stands for, it's massive.”

Sterling added: “But at the same time, I have a contract with City now and I have to respect this. But it's a fantastic club.”

Having won every major domestic honour in England by the age of 25, the chance to strut his stuff on the continent, for one of Europe's most glamorous and feted clubs could be too good to turn down – especially if Manchester City are banned from Europe for two seasons, precluding Sterling from winning the one major club honour missing from his CV. 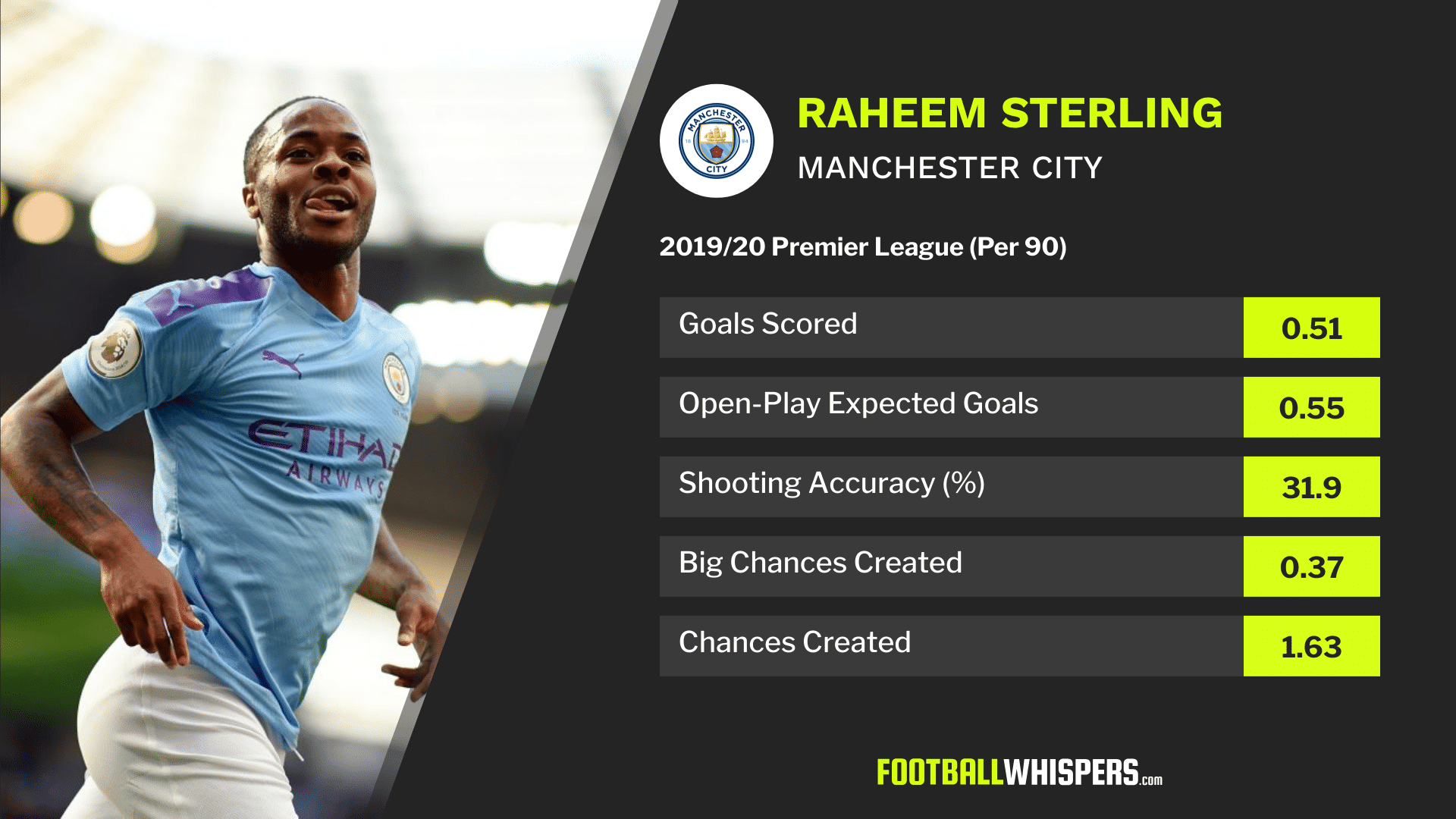 For Real Madrid, the appeal is obvious. Running at pace and with a renewed sense of purpose and direction, Sterling is one of the world's best in his position. Where once his end product was questionable – at best – he is now a reliable goal scorer and creator.

His open-play xContribution – that's expected goals and assists – for the season is 16.42, the fourth-highest of any Premier League forward. No-one in England's top-flight takes more touches in the opposition's penalty area (per 90) than Sterling with 10.88 while he is also the king of the pull-back, completing a league-high 0.41 (per 90) this term.

Sterling has also created the sixth-most Big Chances (9) of any forward in the competition and no-one can top his 34 shot assists by an attacker. All of this in a season where, by popular consensus, he hasn't actually been as good as in the last couple of years.

Not that that should put Real Madrid off. Despite sitting top of LaLiga, Zinedine Zidane's side are in a weird space in 2020. Conceivably they will win their first domestic league title since 2017 and, critically, their first since Cristiano Ronaldo departed for Juventus in 2018.

The Portuguese icon left two summers ago but his shadow still looms large over the Santiago Bernabéu. Madrid elected not to replace their all-time top scorer directly – how could they? – and while Eden Hazard took the No.7 jersey upon completing his switch from Chelsea last summer, the Belgian has flattered to deceive, scoring once in just nine LaLiga starts before fracturing his ankle for the second time this season.

That Sergio Ramos is los Merengues' second-highest scorer with five goals – three of them penalties – after Karim Benzema (13) says it all. On paper, Real's forward line is stacked. Gareth Bale (2), Lucas Vázquez (2), Vinícius Júnior (1) and Brahim Díaz (0) offer a smorgasbord of attacking options but all have question marks of some kind against them. None have fully convinced in Zidane's second coming.

That is where Sterling, at 25, fills a gap. The former Liverpool forward, incredibly, isn't even at the peak of his powers yet. He could conceivably remain at the pinnacle of his position for another five years and that is exactly the sort of player Real need; someone to relieve the goalscoring burden on Benzema's shoulders, freshen up their attack and be the man until Vinícius, Rodrygo or Jović are ready.

Being a Real Madrid Galático is tough. Even Ronaldo was routinely jeered by sections of the Bernabéu and he was, quite simply, a phenomenon. But in his football, as well as the way he has spoken out so eloquently against racism and other issues of inequality, Sterling has proven he has the broad shoulders and maturity to carry such a weight of responsibility.

He has conquered the Premier League and City's potential Champions League ban would provide the perfect storm for a switch to Spain.