A late Gabriel Barbosa double may have prevented River Plate from retaining their Copa Libertadores crown but the stock of the capital club from Argentina is perhaps at its peak.

They’ve appeared in three of the last five Libertadores finals, coming out in top twice, and in back-to-back years have managed to best rivals Boca Juniors.

Head coach Marcelo Gallardo is perpetually linked to Europe’s elite with Barcelona the latest side interested in the 43-year-old tactician. Midfield maestro Exequiel Palacios is a long-term target for Real Madrid while Colombian playmaker Juan Quintero regularly puts on a show for the River faithful.

However, it’s Quintero’s compatriot, Rafael Santos Borré, who has started to steal the spotlight over recent months. The 24-year-old striker has been with the club since 2017 having arrived from Atletico Madrid but it’s only really during this calendar year that he’s got into his groove.

The one-time Villarreal loanee averaged a goal every 96 minutes in the Argentine Superliga and netted three times in six outings in the Copa Libertadores, including a goal in the semi-final victory over Boca and the opener against Flamengo in the final.

According to reports, clubs in Europe are keeping tabs on the forward after his exploits this year. Crystal Palace have been linked in the past and now Everton are believed to be interested in the in-form marksman. Borré’s agent confirmed to Sport Witness that other clubs are in contact asking about any developments.

The 24-year-old is believed to have a €30million release clause in his contract and the Buenos Aires side are unlikely to part ways with him unless that valuation is met.

It’d be a substantial outlay for a player with relatively little experience in Europe. Such a move isn’t one usually made by Premier League clubs but exceptions can be made if players fit the profile. 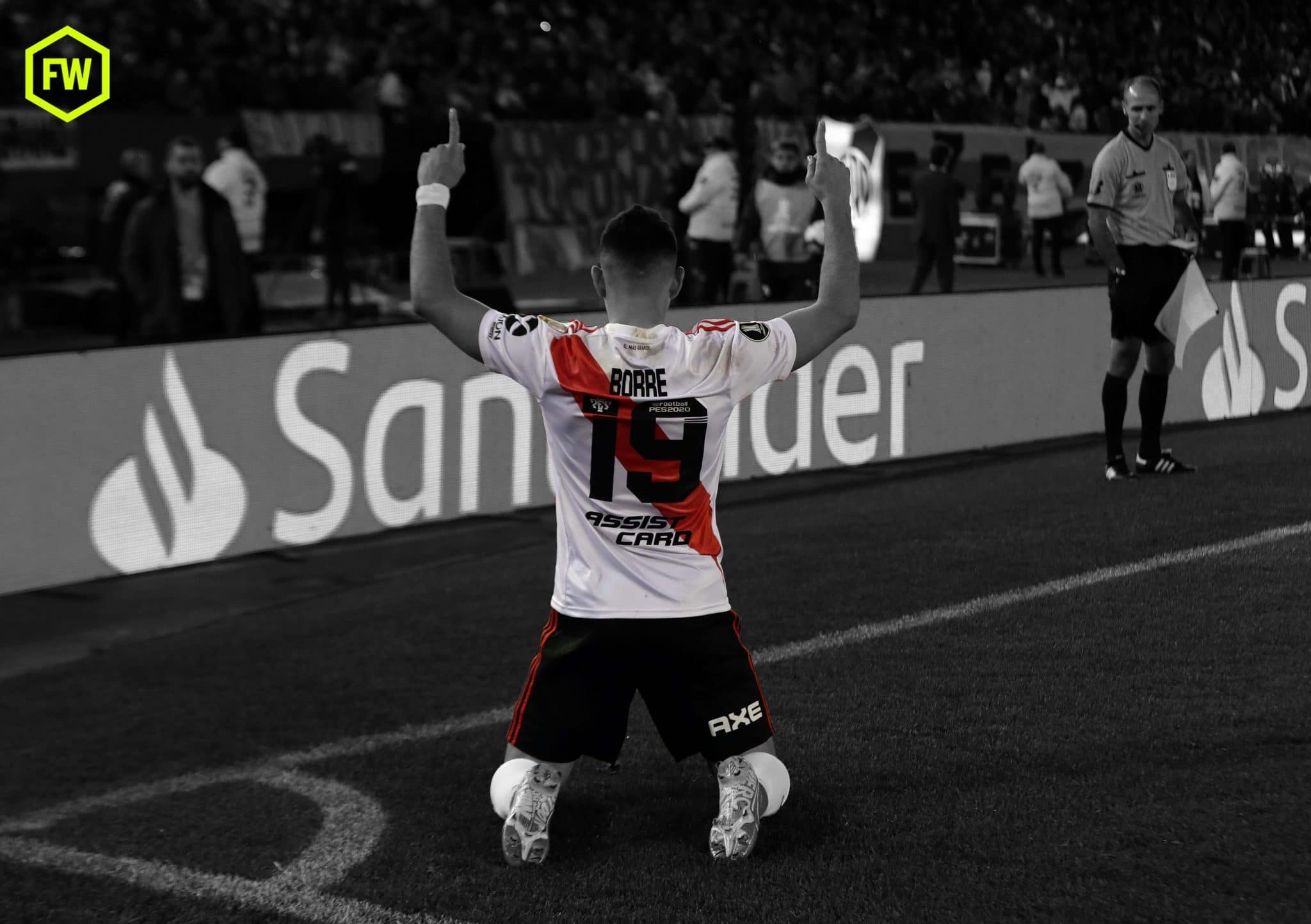 Borré is unique in many ways. He seems to blend the traits of a false-nine with those of a more traditional number nine while impressing on both accounts. Usually, a forward is selfish or selfless, very rarely do they manage to be both. Yet the River No.19 does exactly that.

He's clinical in the penalty area, outperforming his underlying numbers by 0.25 this season. The 24-year-old is getting into dangerous areas with great regularity, too, with his expected goals average for the Superliga and the Copa Libertadores coming in at 0.52 this year.

He doesn't rely on volume either, averaging just 2.3 shots per 90. For context, goalscorers usually average closer to four efforts on goal per 90. It might seem like a minimal difference but over the course of a 38-game season, it's a swing of 65 shots.

He's frugal with his attempts, too, landing close to 64 per cent of them on target. It highlights why he's so productive. Borré works the keeper when he has opportunities and those chances tend to be of high value – each shot has an expected goals value of roughly 0.26. 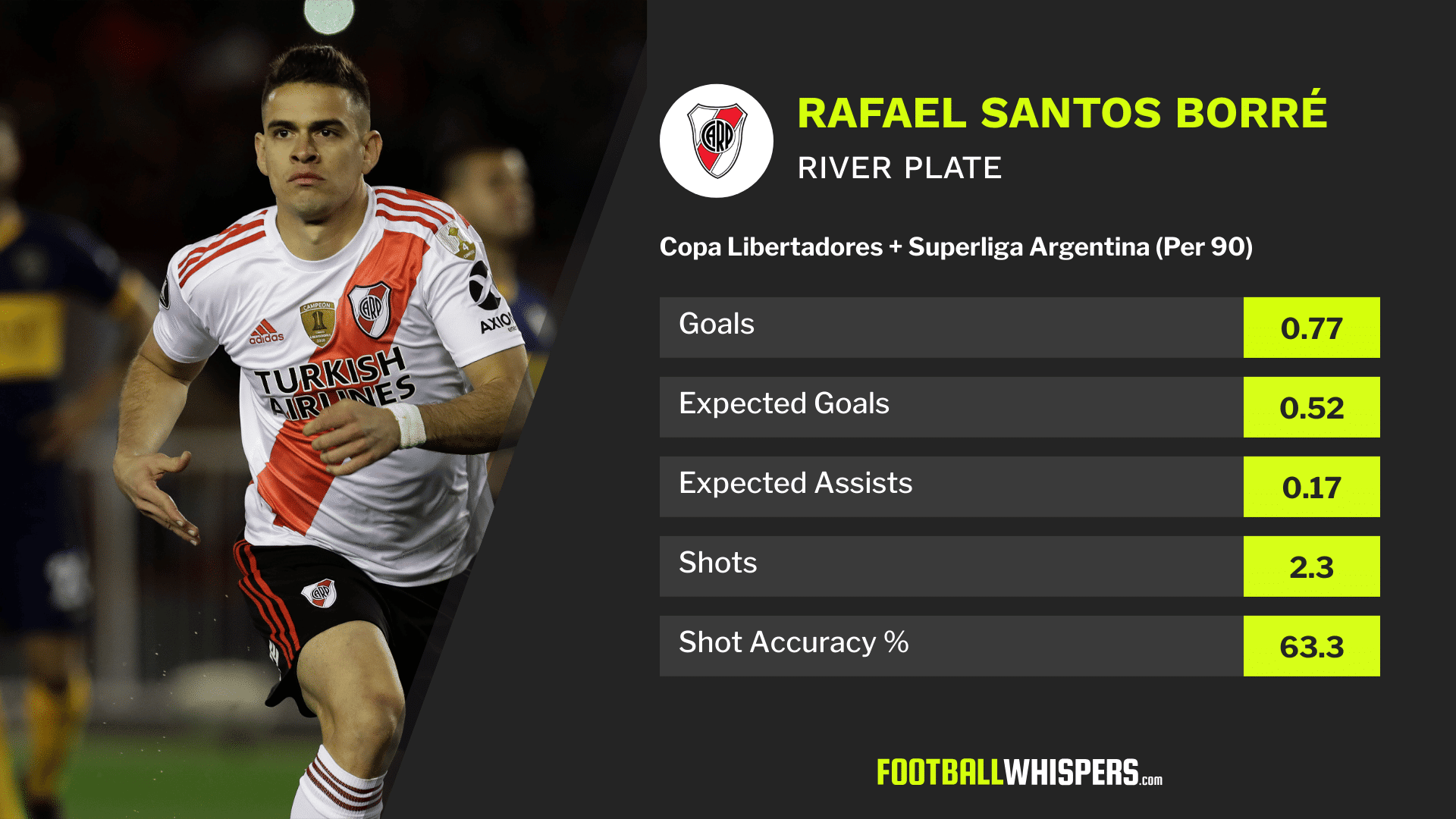 Some team-mates aren't as clinical as Borré and his assist numbers aren't what they should be but that has nothing to do with him. His actual assist average is 0.08. But when you look at the chances he creates, you can tell it's only a matter of time before those numbers rise and he's acknowledged by the masses as one of the best all-round forwards in the world on current form.

Borré is an intelligent player. In the screenshot above, he's dropped off the left-sided defender and into space to receive the pass. His movement attracts both centre-backs and he's able to slide the ball into the team-mate positioned between the right side of the defence.

A still isn't the best way to highlight what is a sequence and the pass can appear fairly straightforward. However, the way Borré positions himself when receiving the ball allows him to take a touch and play an incisive pass in the blink of an eye.

He doesn't dawdle in possession or angle his body so his back is to goal. The forward can see everything to his left and it's why he's able to create such an opening for River.

That sort of clever movement and smart positioning is transferable. He isn't just going to be able to do that in Argentina. If a system plays to his strengths there's no reason he couldn't be pulling the strings like that in England, Italy or Spain.

If Borré is able to increase this positive sample size with more impressive performances, that €30million release clause may soon look like a bargain to interested clubs.