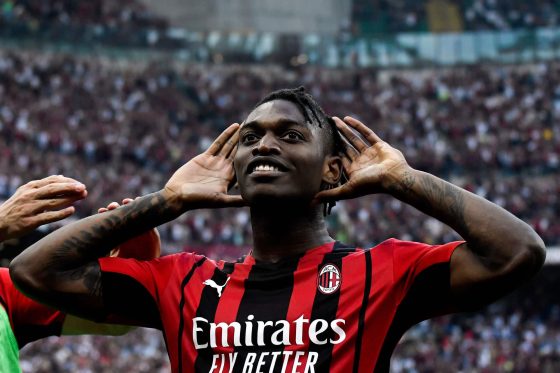 AC Milan forward Rafael Leão is attracting huge interest across Europe for his dazzling displays at left wing, with both Manchester City and Chelsea reportedly chasing his signature.

The 23-year-old has four goals and seven assists from his 11 matches in all competitions this season, with all of his goals arriving in a hugely-competitive Serie A campaign. He’s managed four assists in league action, but has also chipped in with three assists in this season’s Champions League.

Despite his youth, the Portuguese winger already has over 100 appearances in a Milan shirt, becoming one of their most important players of recent years. He’s now into his fourth campaign in Italy, seeking further success to accompany the Serie A title that he helped secure in 2021/22.

He’s also getting plenty of minutes for Portugal, having made his senior debut last October. The winger is one of a number of talented attackers available to the 2016 European champions, who can call upon the likes of Cristiano Ronaldo, Diogo Jota, Bruno Fernandes, Joao Felix and Bernardo Silva for their firepower in the final third.

But Leão will undoubtedly play a key role for his nation this winter, when Portugal come up against Ghana, Uruguay and South Korea in Group H of the 2022 World Cup in Qatar.

A rapid rise to the top for Leão

The forward first came onto the scene as a teenager for Sporting Lisbon, when manager Jorge Jesus handed Leão his debut in February 2018. A month later, the hugely exciting prospect became the club’s youngest ever player to score against fierce rivals Porto, with Jesus at the time noting of his young star: “Each time he is imposing himself more and each time he is giving me signs.”

But their partnership was short-lived, with Leão one of a number of Sporting players to leave the club after around 50 fans attacked players and staff during a training session in May 2018. Fernandes, Bas Dost, Rui Patricio, William Carvalho and Daniel Podence also left the club due to the incident.

The players chose various destinations across Europe, with Leão opting for Ligue 1 side Lille, where he would go on to score eight times in 26 matches for the French club. The Portugal international was utilised solely as a striker in what was a hugely impressive season for the side, with Lille finishing second behind PSG.

Italian giants Milan then came calling, offering Leão his first glimpse of what life as a left winger would be like. He continued to largely operate in a central forward role, but was handed minutes at left wing, as well as on the right and as a second striker.

Any centre-forward traces have, however, now been completely knocked out of his system, with Leão playing regularly at left-wing for all of last season and all of the current campaign so far.

Comparisons have been drawn to France legend Thierry Henry, given just how quick and direct the Milan star is with the ball. Incidentally, the two are even the same height (1.88m), with one stark difference being that Henry transitioned from a winger into a striker, with Leão moving in the other direction.

As noted by Transfermarkt, Leão’s market value has risen rapidly during his spell at Milan, having increased steadily during his time at Sporting and Lille. His current market value sits at €70m, ranking him number one among his talented teammates, and number three overall in Serie A, behind only Dusan Vlahovic (€85m) and Lautaro Martinez (€75m).

The latest reports say that Milan are currently doing everything in their power to keep hold of their young star by offering him a new deal. But discussions remain at a deadlock, which is welcome news to the two Premier League clubs that are reportedly eyeing his signature.

Pep Guardiola’s Man City are extremely strong all over the pitch, but the summer arrival of Erling Haaland has turned their attack up a notch once more, with the Norwegian almost single-handedly transforming the club into world beaters.

But the striker also has the likes of Jack Grealish, Phil Foden, Riyad Mahrez and Julian Alvarez alongside him should he ever take his foot off the pedal, which admittedly doesn’t look likely in these early stages. It’s a truly terrifying attack, but it hasn’t stopped the Manchester outfit from being rumoured with Milan winger Leão.

Perhaps the City boss is already a touch worried that Haaland is relying too much on Kevin De Bruyne when it comes to creating chances for the Norwegian. The pair have formed a phenomenal bond in the early stages of the new campaign, with the Belgian responsible for many of Haaland’s 20 goals across all competitions so far.

A similar bond has formed between Leão and Olivier Giroud at Milan, with the winger constantly providing inch-perfect crosses or intricate through balls for the grateful striker, who more often than not tucks the ball shortly after.

Chelsea are, however, also reportedly chasing Leão, and they’ve had the added bonus of witnessing the winger’s talents up close. The 23-year-old produced several moments of magic in the recent Champions League encounter between the two sides, despite the Blues ending up as 3-0 winners.

But the return fixture at San Siro awaits, and the Milan man will be keen to enact revenge for the ultimately humbling loss at Stamford Bridge.

The London outfit are, of course, going through a transition phase, beginning with the recent recruitment of new manager Graham Potter. But one thing has remained constant at the club despite all the changes; there is money to be spent.

It was the case under former owner Roman Abramovich, and it is once again the case under current incumbent Todd Boehly. As ever with Chelsea, the man in the dugout won’t be given a huge chunk of time to deliver success, but he will at least be given backing to build his own squad.

As shown with Brighton, in contrast to Thomas Tuchel’s heavy reliance on a sturdy defence, Potter is keen to play attacking football, and Leão is very much a player who would suit his style of play. Moreover, the futures of the likes of Christian Pulisic and Hakim Ziyech are becoming increasingly uncertain as every game week passes.

Could Leão be the next exciting attacker to try his luck at Stamford Bridge?