It's something of an open secret that Everton are on the hunt for a new striker this summer. Several names have been linked with a move to Goodison Park, some more inspiring than others.

The latest name to be added to this is list Lille Rafael Leão. According to reports in France, Everton have submitted an offer close to £33million for the forward.

Many may view such an offer as reckless; the 20-year-old has just one season of first-team football to his name. Yet Leão has long been considered a special talent, one worthy of such a fee.

Given Leão's undoubted talent and his rise through the youth ranks of Portuguese giants Sporting, it was somewhat inevitable he would one day be compared to the club's most famous academy graduate: Cristiano Ronaldo.

That comparison arrived earlier this year. “When he wants to be decisive, he is,” former Sporting youth coach Tiago Fernandes told L'Equipe in February. “There are players that if they force it, it doesn't work all the time. With him, you say to yourself, what potential, what power.

“I pushed Jorge Jesus [then head coach of Sporting] to put him in the first team. I said: ‘Yes, Gelson Martins has talent but Rafael is the best player in the history of the Sporting Academy'. At youth level, he was better than Cristiano Ronaldo.”

Sporting didn't get to benefit from Leão's talents. He made just five first-team appearances for the club, in which he scored twice, and then cancelled his contract last summer after a group of Sporting ultras attacked players at the club's training ground.

Previously wanted by Borussia Dortmund, Juventus and Manchester City, Leão had his pick of top clubs. Yet he decided to join Ligue 1 side Lille, an established finishing school for several of Europe's elite players.

“Rafael chose our proposal and our project and we thank him for his decision,” said Lille CEO Marc Ingla. “He has impressive technical and physical qualities that make him one of the most attractive and promising young players in world football

Living up to the hype

Lille boss Christophe Galtier eased Leão into the Lille first-team. He was made to wait his debut, which didn't arrive until September. But once up to speed with the Frenchman's demands, the striker formed one of the most devastating attacks in Europe.

Nicolas Pépé was the standout and he will get a move to one of Europe's elite this summer. Jonathan Ikoné and Jonathan Bamba will also one day go for big money. Yet Leão was often the man to knit everything together.

The Portugal international can drop deep to link with his midfield, can hold the ball up and bring fellow attackers into play, and can break behind the opposition defence. He isn't Mbappé quick but has a long stride and that often is enough to get beyond opposition centre-backs.

As the below graphic highlights, Leão was a constant threat for Lille last term. 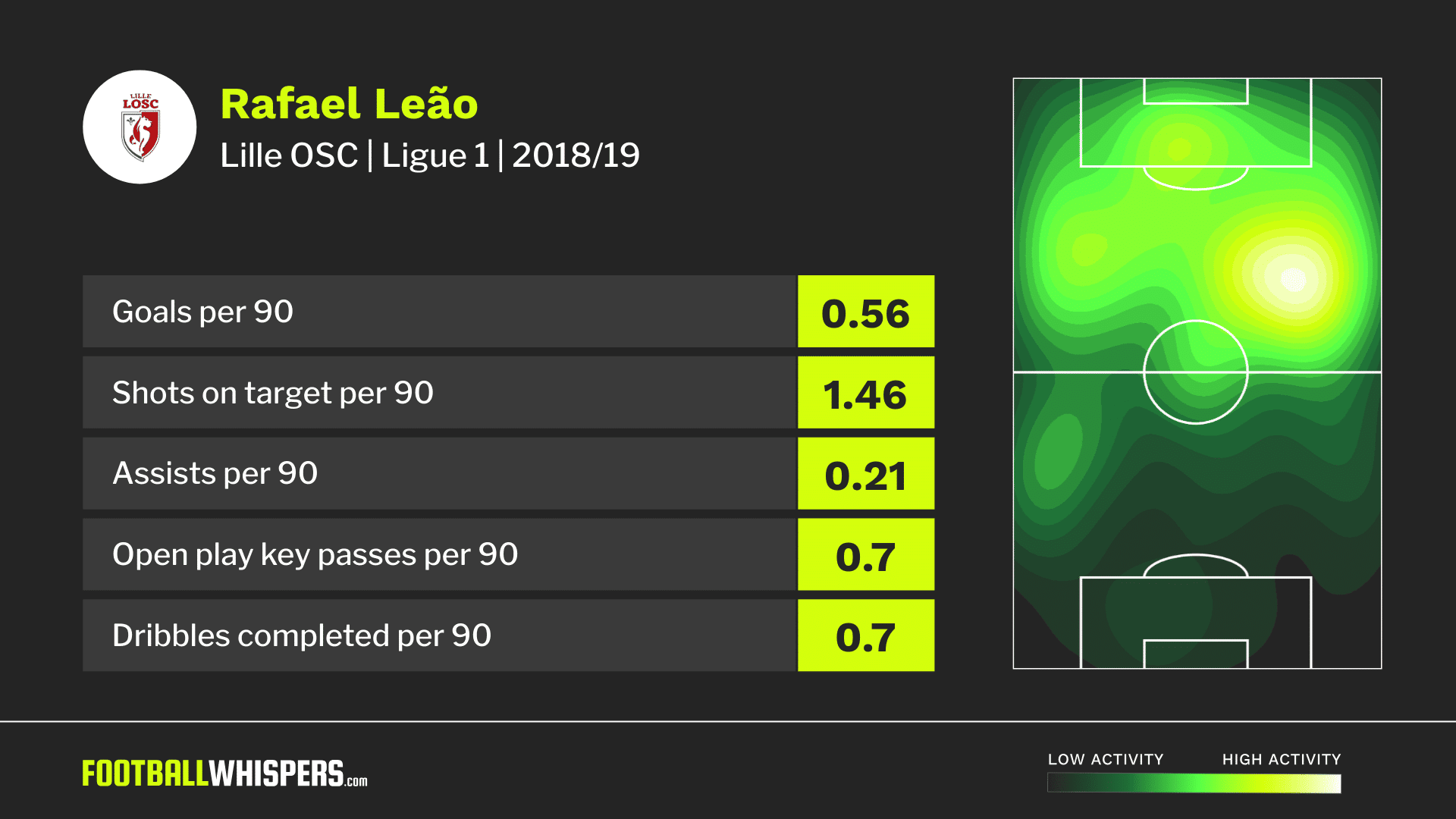 His 0.56 goals per 90 was the ninth-best figure among Ligue 1 attackers, as were his 1.46 shots on target per 90. And while he is effective outside of the penalty area, it's in the 18-yard box that Leão stands out.

He is a clinical finisher. A striker capable of finding the net in a variety of ways, from the simple close-range tap-ins to the instinctive efforts which find the bottom corner.

All of his goals came from inside the area; present him with an opportunity and it's likely Leão will find the back of the net. But he can also find a team-mate if they are better placed, which is why he was 15th in assists per 90 among Ligue 1 forwards last term.

Leão would probably be best served by staying at Lille for another season before making his first big-money move. However, that isn't going to happen.

Serie A side Napoli and LaLiga‘s Valencia want the youngster and have made bids. There is even interest from newly-promoted Aston Villa. So if Everton want Leão they have to move this summer.

He won't come cheap but, while signing a player is not an exact science, he would likely provide more of a goal threat for Marco Silva than the ineffective Cenk Tosun (four goals last season) and the energetic but limited Dominic Calvert-Lewin (eight goals last term).

He would, in all probability, also dovetail well with Richarlison, another Portuguese speaker.

At Lille, Leão struck up an excellent understanding with Pépé and that is why, as shown in the heatmap above, he would drift more towards the right flank.

If Pépé went long, Leão would drop deep and attempt to find the Ivorian with a through pass. If the winger came inside, the striker would put himself between centre-back and full-back and then look to exploit the space behind.

Pépé finished the previous campaign with 23 goals, a marked improvement on the 14 he registered in 2017/18. And while Leão isn't the sole reason for such a spike in productivity, his influence shouldn't be overlooked.

If Leão could have a similar effect on Richarlison on the opposite side of the pitch, then that £33million fee would soon prove a bargain. It's taken some time, but Everton may have finally found the man to fill the hole Romelu Lukaku left two years ago.