Newcastle United have only lost two league games in 2018. Their two defeats came against teams who have proven themselves to be among the best in Europe — Liverpool and Manchester City — and both were away from home.

This run of form which contains five victories and four draws among those two defeats has racked up 19 points, which have propelled Newcastle to their current position, where they are just a win away from overtaking Everton on goal difference and moving into eighth place.

At the start of the season Everton were tipped for European qualification and Newcastle, with what was widely considered a Championship-standard squad, were relegation favourites.

Rafa Benítez has been able to get the best from a group of players for some of whom ‘Championship standard’ may be an unfair description, but nevertheless there are numerous areas where the Spaniard would look to improve his squad if not his starting eleven.

The relative success they’ve had in 2018 has been down to a formation change which has evidently made them difficult to beat.

Aside from the next level quality of Manchester City and Liverpool, Benítez’s side have been able to defeat teams such as Manchester United and Leicester City, while also picking up important points away to Crystal Palace and Bournemouth.

Having begun the season using one of his favoured systems,  4-2-3-1, Benítez realised changes were needed to get the best out of certain players who would be key to avoiding the drop.

The system change has led to calls for a number of these players to be included in their national team squads ahead of the World Cup, and has also allowed new signing Kenedy to slot into the side in a position where he can cause damage.

On the face of it there isn’t much difference between the early season 4-2-3-1, and the 4-4-2 / 4-4-1-1 formation which Benítez has opted for in the latter half of the campaign, but there are signs that the shape has changed.

The club’s matches against Southampton this season, the first on October 15, 2017, and the second on March 10, 2018, are a good indication of the changes made.

The average positions from that game, shown below, raise some confusion as Joselu appears deeper than Ayoze Pérez, when in reality the roles are reversed when defending.

This is because these averages are taken from touches of the ball rather than defensive actions, and Joselu will often have to come deep to win headers, while Pérez makes runs ahead of him to get on the end of knock-downs or passes.

Regardless of this, the wide players, especially Matt Ritchie, are tucked inside in front of the double pivot of Jonjo Shelvey and Isaac Hayden, rather than wider as they would be in the 4-4-2. 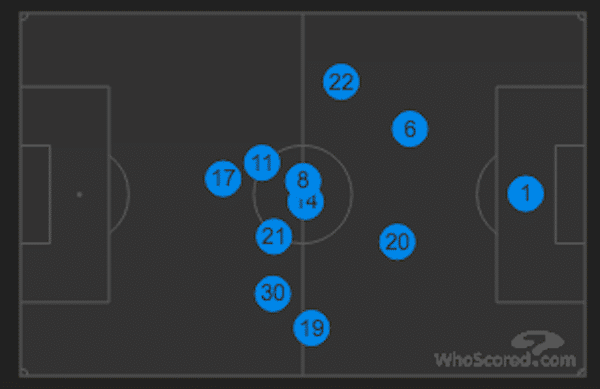 The home game in March shows the wide players more in line with the double pivot, and a touch wider, providing more support to the full backs if possession is turned over.

The two banks of four provide the defensive solidity Benítez requires from his sides, and the attacking pair can always drop back themselves to clear up in front of the midfield four.

However, rather than becoming a 4-5-1 in defence as the 4-2-3-1 often does, this 4-4-1-1 leaves two players available for the out-ball as Newcastle look to either counter-attack or relieve some pressure on the defence by keeping the ball themselves. 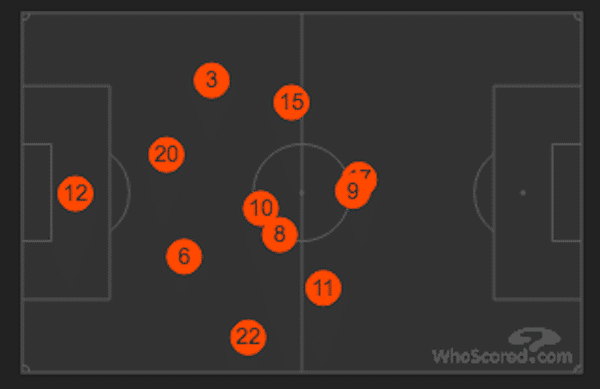 The team are bottom of the league when it comes to average possession in games, and this will be something Benítez may have tried to remedy using the 4-4-2.

Kenedy has slotted in perfectly on the left, playing in a role somewhere between the left wing-back position he played for Chelsea, and the more attacking role he had back home in Brazil for Fluminense.

Ritchie’s role on the right is now more similar to that which he operated in during their promotion from the Championship, and he scored his two goals from this position.

Shelvey is once again being talked about as a potential England player on the back of this second half of the season form, and Jamaal Lascelles was unlucky to miss out when Gareth Southgate tested new centre back options in the recent friendlies.

Maybe the England manager believes that they are shining because of Benítez’s system and would be exposed in the back-three systems used at the national team.

Regardless, these players, and the club, are benefitting from the Spaniard’s changes, and this group who were supposedly a bunch of Championship players now look far from it.

The task now is to turn them into a Premier League standard squad to help Benítez take them further up the table next season. Maybe then he can revert to his 4-2-3-1.