The current Premier League table can be broken into four conveniently neat categories. At the top, Manchester City and Liverpool have broken away into their tussle for supremacy.

There is a mini-league of teams trying to avoid finishing in 18th, too. With Huddersfield Town and Fulham looking doomed, Cardiff City, Burnley, Southampton, Brighton & Hove Albion and Crystal Palace will scrap to avoid the drop.

There is an unusually intriguing battle for seventh, as well. With the gulf between the top six and the ‘rest' as wide as ever, seventh spot is more magnetic than ever to the teams below. Wolverhampton Wanderers are a point above Watford, but West Ham United and Leicester City can still steal in with a late-season surge.

Then there is the race for the top four. For a while, it looked as though Arsenal and Chelsea would battle for fourth. However, thanks to Manchester United‘s reawakening under Ole Gunnar Solskjær juxtaposed with Tottenham Hotspur's slip back into the pack, we have a four-way battle for two spots.

Spurs are third on 61 points, one above north London rivals Arsenal. United are next on 58 points but Chelsea, on 57, have a game in hand.

It's impossible to tell how things will pan out over the next two months but, as ever, we like to look at numbers and make reasoned prognoses on how we think the table will look come 5pm on Sunday, 12 May.

Before we delve into the underlying statistics, let's look quickly at recent form. Spurs still hold a slender lead but they have had the patchiest run out of the quartet, winning one of their last five and losing three.

Arsenal, in contrast, have taken 13 points from a possible 15, including an impressive 2-0 win over United last time out. The two points dropped came in the derby against Spurs when Pierre-Emerick Aubameyang missed a stoppage-time penalty.

That defeat at the Emirates Stadium was United's first under Solskjær. Regardless, the Norwegian's Midas touch has propelled the Red Devils back into the conversation. When Solskjær was appointed in December, United were sixth but closer to the relegation zone than they were to fourth-placed Chelsea, 11 points adrift of the Blues.

Speaking of, Maurizio Sarri's side have attracted much scepticism but have refused to go away. A 6-0 defeat at Manchester City was the crushing nadir of an eventful season but they responded well by beating Spurs 2-0 at Stamford Bridge.

Let's compare Spurs to Arsenal. Unai Emery's Gunners have outscored their counterparts with 63 goals to 57, but both sides have comfortably outperformed their expected goal (xG) for the season; 48.18 for Spurs and 50.38 for Arsenal.

Using the post-shot xG model, which takes into account both the location and placement of a shot, against regular xG enables us to assess a side's finishing.

In other words, as Spurs' post-shot xG outscores their overall open-play xG, they are shooting with more precision and, should they continue to do so, they should, in theory, outlast Arsenal.

Mauricio Pochettino's men have shipped seven fewer goals than Arsenal's 39. The shots Spurs have faced this season have amounted to 41.16 expected goals, conceding 32. Arsenal have faced 42.72 xG and conceded 39. Spurs, therefore, have ‘saved' over nine goals, while Arsenal have saved 3.72.

Moving onto to Manchester United and Chelsea, the Red Devils have scored eight more than the Blues' 50, but have conceded 40, nine more than the Stamford Bridge outfit.

Interestingly, United have comfortably outperformed their open-play xG, scoring 49 against an expected 46.59. Chelsea, on the other hand, have struggled in this regard, scoring 43 times from an expected 46.86. It's no surprise, then, to see United's post-shot xG tower over Chelsea's, 62.29 to 48.74.

Chelsea have, however, been the stronger defensive unit. They have conceded the fewest goals out of the four teams, shipping 31 against an expected 29.12. United have allowed 40 past David de Gea but that's still slightly better than their expected 42.97. 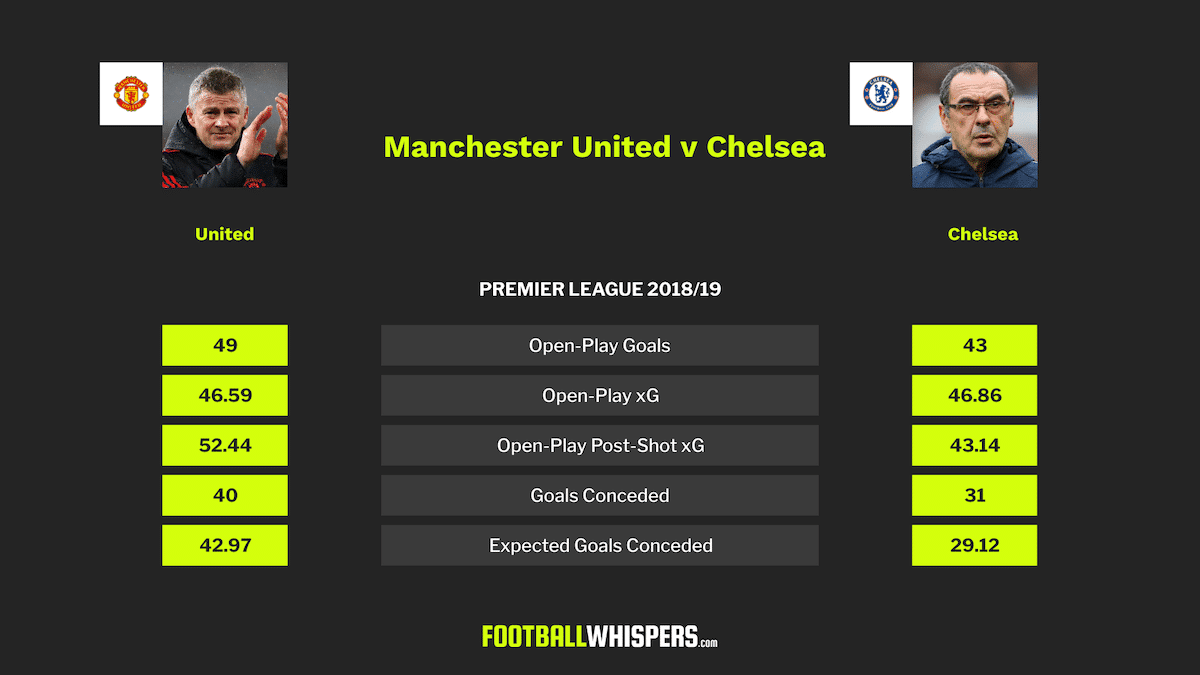 Overall, it perhaps paints a bright picture for Spurs and United, but the remaining fixtures will doubtless shape the final top four. Spurs still have to travel to Liverpool and Manchester City. Arsenal don't have to face another top-six rival but will face tricky tests on the road against Watford, Leicester and Burnley.

United certainly don't have it easy either. They must travel to Wolves and welcome Manchester City and Chelsea in consecutive games at the end of April, a four-day spell which could potentially determine Solskjær's future. Chelsea, as mentioned, must travel to Old Trafford after having faced Liverpool at Anfield on April 14. Chelsea arguably have the toughest final three games: United away, Watford at home and Leicester away.

Like with the title race and relegation dogfight, the race for Champions League qualification will almost certainly go down to the wire. If pressed, we'd say Spurs and United will clinch third and fourth respectively, meaning Europa League football once again for Arsenal and Chelsea.