Quincy Promes would have loved to have been involved in Spartak Moscow's Champions League game against Liverpool a few weeks ago. The Dutchman was ruled out with a thigh injury and was forced to watch from the stands as his teammates held the Reds to a 1-1 draw.

Now, it feels as though Promes is making up for lost time.

The 25-year-old was believed to be a key Liverpool transfer target in the summer. Although the link never went beyond speculation, Reds boss Jürgen Klopp admitted that he is a player he likes.

“He's a good player, a very good player but there's nothing else to say,” the German said in the build-up to that 1-1 draw in September.

Klopp clearly has an admiration for Promes, who has also attracted interest from Arsenal and Everton, but, in the interest of respect, he remained somewhat coy when asked about recent speculation.

After missing the chance to shine in front of an illustrious admirer, Promes took centre stage as Spartak demolished Sevilla 5-1 on matchday three of the Champions League.

The Netherlands international scored twice and set up another two as Spartak mercilessly tore into a horribly misshapen Sevilla team, sensing a weakness and going straight for the jugular.

When Promes was done with them, the Sevilla defenders trudged off the pitch at the Otkrytiye Arena dazed and demoralised, left exhausted by the speed and efficiency with which Promes danced through the holes they left in thrilling and breathless fashion.

It felt like a statement performance. Seizing an opportunity to grab the headlines in the Champions League is never a bad thing, but the manner in which Promes stole the show will not go unnoticed by scouts. He came up against an admittedly wretched Sevilla defence, yes, but good players can sense when to strike – and Promes most certainly struck.

WHY YOU NEED TO KNOW HIM

Promes is now in his fourth season with Spartak after moving from FC Twente for a reported fee of £13million. During that time, he has managed 54 goals in 104 appearances and helped Spartak to the Russian Premier League title in the 2016/17 season, breaking into double figures in every season.

When he arrived in Russia, he was an undoubtedly talented but raw winger, but has developed the major areas of his game significantly over the last three years. Blessed with electric pace and a low centre of gravity, Promes is regularly deployed on the left of midfield, using his dynamism to cut inside and drive at defences and shoot with his deadly right foot.

He can also play further up the pitch, either behind the striker or on either wing in a 4-3-3, so his versatility is as much an asset as his technical attributes.

2 goals and 2 assists for a vital 3 points. Outstanding performance. pic.twitter.com/SHHcGIP4Gg

However, it would be inattentive not to highlight his quality on the ball. Promes' second goal against Sevilla – and Spartak's fifth – really encapsulated his finest talents in one fell swoop. Plucking a high ball out of the air and killing it with his first touch, Promes skipped past the first challenge before nutmegging the defender, finishing off an excellent individual effort by driving a low shot into the corner.

The technique, skill, confidence and clinical finishing on display made it impossible to ignore. His overall contributions against Sevilla, though, were exemplary, with 91 per cent passing accuracy, five chances created and three take-ons. He was basically everywhere for the home side, both eluding and terrorising the helpless Sevilla defenders.

While his second goal predictably did the rounds on social media, his first was eye-catching, too. Although a natural wide man, Promes displayed the movement and instincts of a poacher to grab the opener.

As Andrei Eshchenko shaped to cross from the right, Promes darted straight through the Sevilla defence and headed home with aplomb. Indeed, the timing of the run and the execution of the header were emblematic of a man thoroughly confident in his own abilities. 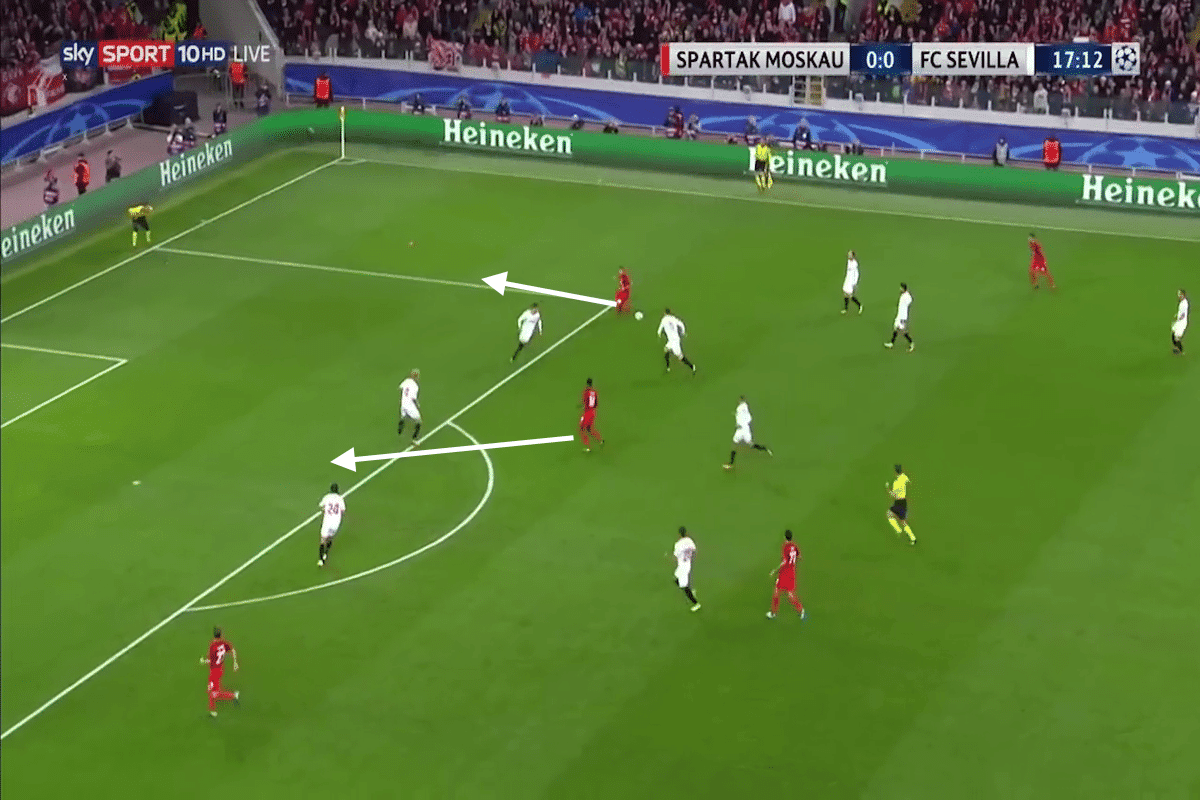 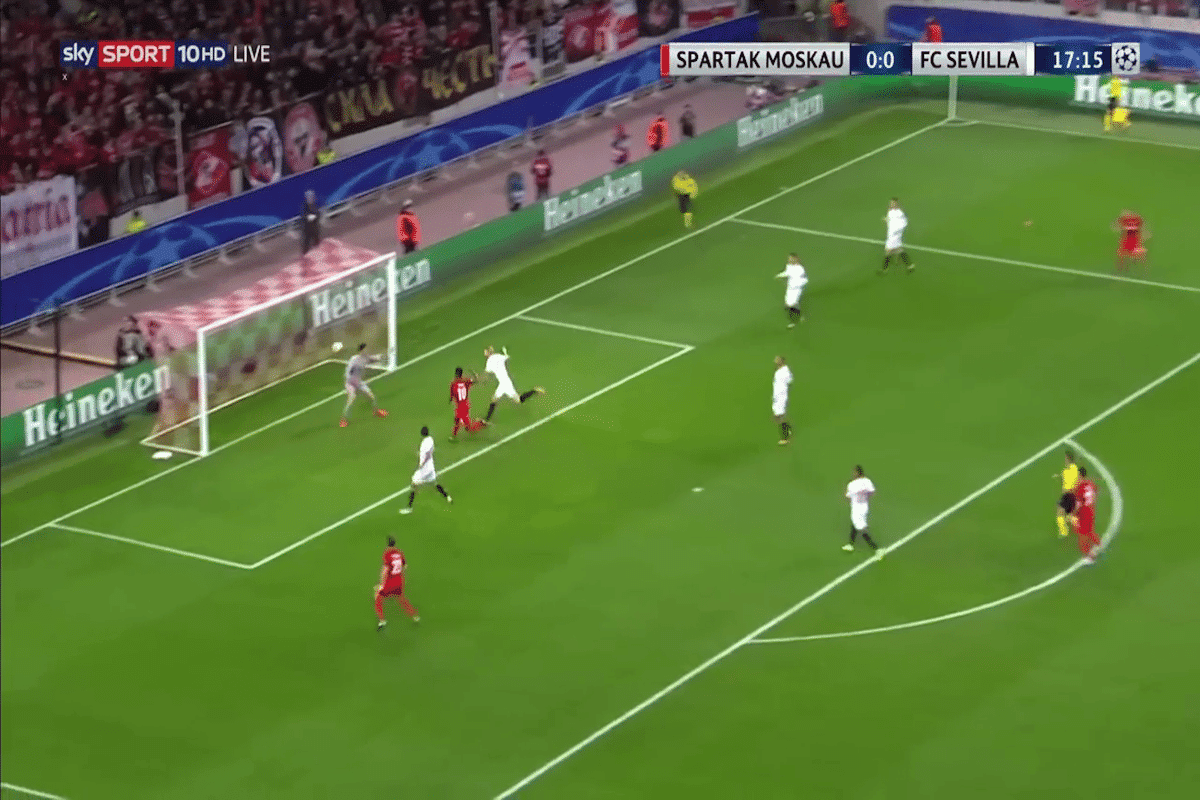 DOES HE MATCHUP TO  MANÉ?

Liverpool considered the Dutch winger as back-up for Sadio Mané in the summer and, when Klopp mentioned Promes, he specifically alluded to the Senegalese forward, suggesting that he draws clear similarities between the two players.

Of course, Mané is an established Premier League star and Liverpool's devastating weapon in attack, but Promes' goalscoring stats match up to the former Southampton man. Mané has 16 goals in 37 appearances for the Reds, while Promes has 54 in 104, so his goals to game ratio of 0.52 is better than Mané's 0.43.

Promes completes 82 per cent of his passes, which edges Mané's 81. Promes also averages 3.2 key passes in the Russian Premier League this season, which is higher than Mané's 0.8. The quality of the chances created is also important, but Promes has created genuine goalscoring opportunities as four of them have been converted. Mané hasn't notched a Premier League assist, though.

Having signed a new contract with Spartak to become their highest-paid player last year, it would take a sizeable bid for the club to part ways with him. However, the player who was thrown out of Ajax's illustrious academy aged 16 has proceeded to become one of Dutch football's leading lights.

He is good friends with former Manchester United winger Memphis Depay. Unfortunately, his compatriot failed to live up to the fanfare that greeted his arrival at Old Trafford but, having shown a tremendous capacity to learn over the past few seasons in Russia, there is enough evidence to suggest that Promes could shine in the same league where Depay was derided as a flop.

With his club football experience limited to the Eredivisie and Russian Premier League – two significantly different styles and cultures to England – he would definitely require some fine-tuning and patience before flourishing in the Premier League.

But make no mistake, Promes has the quality and technical attributes to become a real star in this division. It will be interesting to see if Liverpool, or indeed someone else, pursue him come January.