It is a commonly held belief – one founded on a certain element of truth, we should add – that Bournemouth boss Eddie Howe's weakness is the transfer market.

As a pure coach there are few better than the 40-year-old. He has improved countless Cherries players, many of whom have helped the club rise from League One to the Premier League, and has implemented an attractive, attacking style of football on a far smaller budget than many of his peers.

Yet when it comes to signing players, especially those outside of England, Howe's record is questionable. So eyebrows were raised when the Cherries boss authorised a deal to sign Jefferson Lerma from Levante this summer for a club-record £25million.

Yet it's taken Lerma just nine games to silence his, and Howe's, doubters. The 24-year-old has become a key cog in the extremely effective Bournemouth side, one that sits sixth in the Premier League table after ten games.

Several players have been lauded for their performances this term; the likes of Callum Wilson, Ryan Fraser, Nathan Aké and fellow summer signing David Brooks the standouts.

Lerma's displays, though, have gone somewhat under the radar. He isn't flashy but he's undoubtedly effective. The yellow cards remain, though. He's collected three in the top flight so far.

“The Spanish league is good but the Premier League is more competitive; I think my style will suit the Premier League better than La Liga,” he admitted in August. “It is the best league in the world and that’s why I wanted to play in this league and compete.”

Lerma, who played in each of Colombia's four World Cup games, was eased into the Bournemouth side by Howe. The midfielder wasn't included in the match-day squad for the club's opening two Premier League games and was an unused substitute in the third.

His first taste of English football was in the Carabao Cup and four days later he started against Chelsea at Stamford Bridge. The Cherries lost the game 2-0 but Lerma impressed. His energy as part of a midfield two was vital in disrupting the flow of Maurizio Sarri's side.

That match was also an opportunity for Lerma to go up against a man he aims to emulate in the Premier League: N'Golo Kanté.

“I look up to N’Golo Kanté,” he told The Guardian. “I think he is one of the best players at recovering the ball and working hard. I want to be like him and I feel I am a little bit like him.”

Stylistically, Lerma has proven himself comparable to Kanté in his seven Premier League appearances. His positioning isn't as refined as the World Cup winner but the 24-year-old's athleticism and willingness to press opponents mirrors that of the France star.

It's why this term, despite the midfielder missing Bournemouth's opening three league games, no player at the club has won possession on more occasions than Lerma (62).

That is shown below in the stills taken from Bournemouth's excellent win over Fulham. The Whites have just recovered possession on the edge of their penalty area and can launch a counter attack.

Ryan Sessegnon, who is closed down by Adam Smith, attempts to feed André Schürrle, who is already bursting forward. 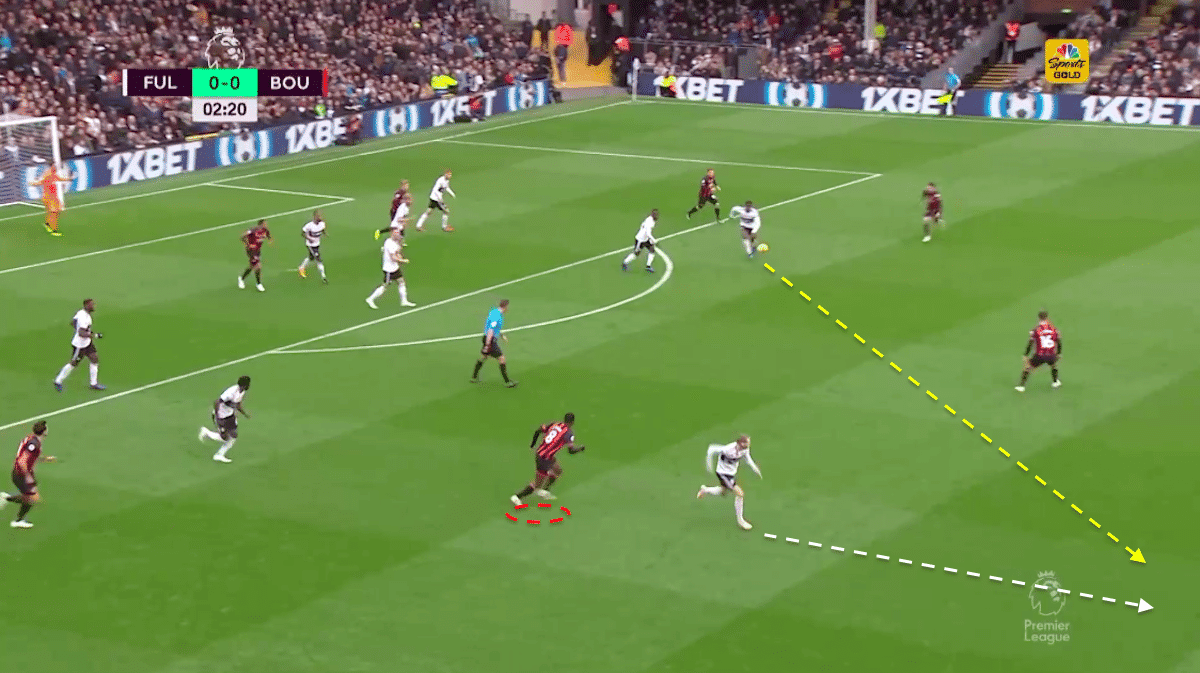 But Lerma spots the danger and instead of pursuing the German in a race he's unlikely to win, he reads the direction of the pass expertly and shuts down the counter before it has even begun. 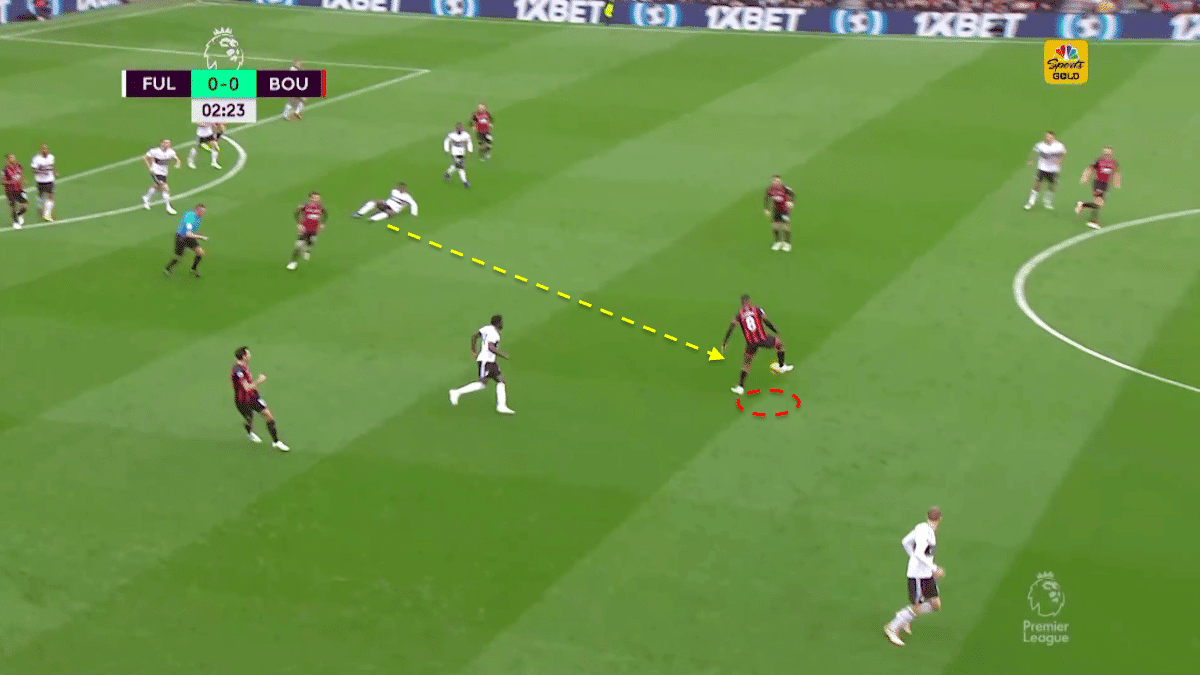 Lerma himself then comes under pressure but calmly retreats and knocks the ball to his centre-back who is able to start a Bournemouth attack. 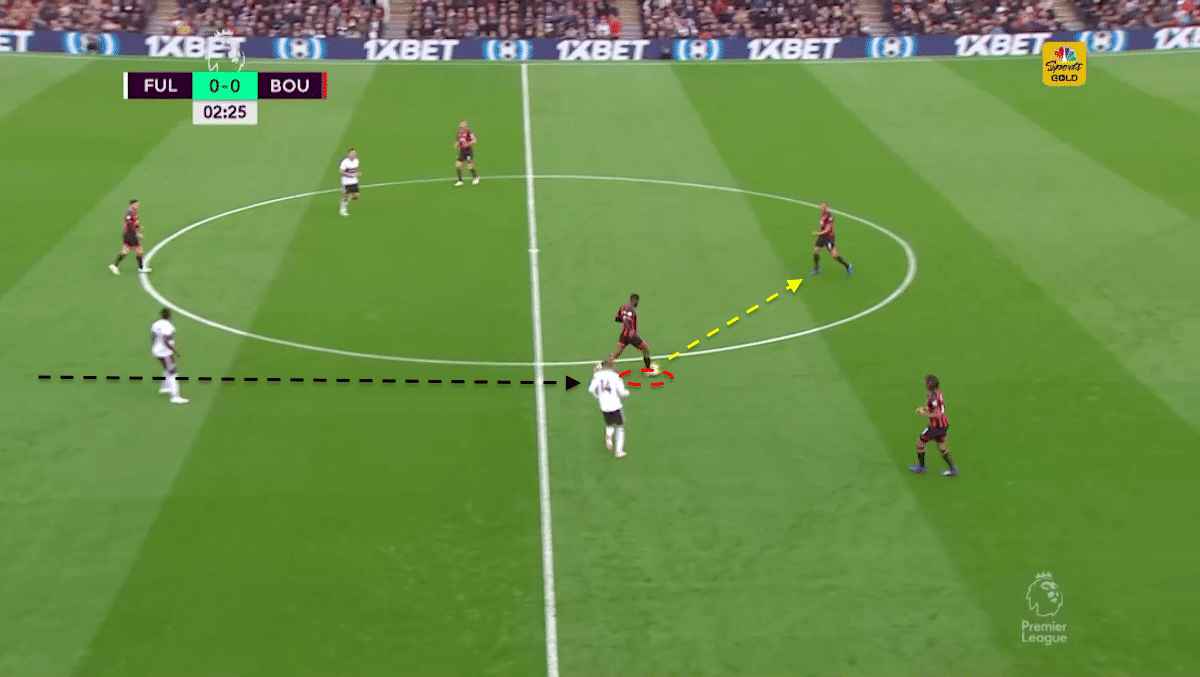 The above is a snapshot of what Lerma has done so well this season. His ability to read the game and snuff out danger – only 14 Premier League midfielders can better his 1.89 interceptions per 90 – is vital for an attacking Bournemouth side.

He also protects the defence aerially. Aké and Steve Cook are not giant central defenders who can dominate strikers, so Lerma's physicality often means he drops deeper to nullify a striker. He does this well and his 2.77 aerial duels won per 90 minutes is only bettered by two of his peers in the top flight.

Yet as part of a midfield two – Howe tends to favour 3-4-2-1 or 4-4-2 systems – there is an onus on the ex-Levante man to progress possession. And this is where he differs to the more conservative Kanté.

Lerma is very comfortable with the ball and as such is happy receive possession in tight areas. However, even when being closed down he looks to move Bournemouth up the pitch; tellingly 26.5 per cent of his 54.49 passes per 90 are forward.

The most exciting aspect about his game for Bournemouth fans, however, is that he should only get better in the coming months. After all, he is still adapting to a new country, a new language, a new culture and a new style of football.

What is clear, though, is Howe was right about Lerma. And the £25million fee is quickly looking a bargain. If the Colombian continues to shine it won't be long until European giants are sniffing around – although one has already put the midfielder on notice.

During his time at Levente, Lerma made an impactful cameo against Real Madrid. After the game he was congratulated on his display by Los Blancos president Florentino Pérez. “I thanked him and responded, ‘Bring me to Real Madrid,'” the midfielder told AS. “He said, “Keep on like that and you’ll come, you’ll see.’”

Time will tell if Pérez lives up to his word. Although whether Lerma would want to trade in a team in the Premier League top six for one languishing in mid-table in La Liga remains to be seen.