QPR remain unbeaten in the Championship after coming from two goals down last weekend. Can they keep momentum going as Coventry visit? Find out with our QPR vs Coventry match preview with free tips, predictions and odds mentioned along the way.

QPR vs Coventry: Our top picks

QPR to remain unbeaten with another win

Yes, we're kicking off our predictions by suggesting QPR will win and extend their unbeaten run in all competitions to 11 games; included in that period are three wins in their past four games meaning they're very much a team in form and they look good too! Coventry meanwhile have already lost twice this season – once in the cup and once in the league. To be fair, it means the Sky Blues have amassed nine points from 12 to put them above QPR but this will be the toughest test they've had to date; none of their three wins have particularly raised eyebrows. That and the fact they've lost their last two away games against QPR gives us confidence in our tip.

Coventry to ship at least a couple

That's right, our second free prediction is that QPR score a minimum of two goals in the match. Now, Coventry have only averaged 1.5 goals against across their past 10 fixtures but QPR are good value for a goal or two. They're one of the highest scorers in the Championship right now with an average of 2.5 goals scored per game across their last 10 in all competitions. You have to go back to March 13th for the last time they failed to score so they do know where the goal is.

So, we've backed QPR to win and we've predicted they'll score at least two goals. What about Coventry? Well, we think they'll register on the scoresheet too. QPR are the third most potent attacking force in the league at present but they've managed to record one clean sheet in the league so far this campaign with the five goals they've conceded as bad as any other goals against column in the top nine.

The best betting odds for QPR vs Coventry

QPR's result last time out in the league reads okay on paper – a 2-2 draw – but it angered their boss Mark Warburton into making two first half changes; those who made way were Andre Dozzell and George Thomas. It's unlikely they'll be starting come 3 PM Saturday. Coventry are gunning for three wins on the spin but, given expectations of their season, an away day at a much fancied QPR is almost a free hit. They won't see it that way though and Martyn Waghorn, who is yet to score for the club, has a decent record against QPR.

The final word ahead of QPR vs Coventry 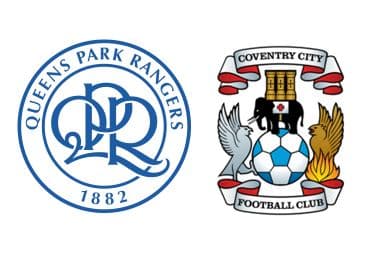