QPR suffered a devastating late loss last time out. Can they bounce back here with a win? Find out with our QPR vs Birmingham match preview with free tips, predictions and odds mentioned along the way.

QPR vs Birmingham: A trio of betting tips

QPR to get back to winning ways

West Brom came from behind to beat QPR last time out to ensure that the hosts of this game are now five games without a win (in 90 minutes). Thankfully for them they face a Birmingham side that have won just three of the last 10 matches. With that longer term form considered we fancy Mark Warburton's men to get back to winning ways; they may have lost three in four but prior to that they were on a 13 game unbeaten streak and a cup win against Premier League opposition last week will mean spirit remains high.

It will be a good watch

Next up we back the game to have over 2.5 goals. QPR have gone over the 2.5 mark in each of their last five games and hold a season long average of 3.4 goals per match; only Reading have a higher average. Birmingham bring a little bit of doubt to this tip but not enough to turn us off. They've seen two of their last five go over 2.5 but both of those instances of ‘over' have come in the last three. Their average for the season is under 2.5 too at 2.2 but that jumps if you look at their form on the road to 2.8.

Both teams to contribute in high scoring encounter

Whilst we are on the subject of goals we might as well throw out a prediction that both teams will score. Again, Birmingham are the team that lessen the chances with the fact they've blanked in their past two but longer term form shows they score goals with 10 goals scored in their nine league games this season. QPR aren't one for keeping clean sheet either; they've conceded 14 times in the league giving them the second worse defence in the top half. They've seen both teams score in their last five games too.

The best odds for QPR vs Birmingham 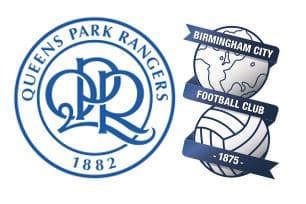