Chelsea became the third English team to secure their passage into the Champions League last 16 with a routine 4-0 win over ten-man Qarabag.

The Premier League champions survived an early scare when ex-Birmingham City midfielder Michel cracked a shot off the crossbar but from there on they were in control.

That became complete dominance after 21 minutes when Qarabag skipper Rashad Sadygov hauled down Willian in the box allowing Eden Hazard to convert the spot kick.

Willian bagged a second nine minutes before half-time with Hazard providing the assist before Cesc Fàbregas tucked away another Willian-won penalty with 18 minutes remaining.

Five minutes from time Willian completed the job with a rasping fourth from the edge of the penalty area. 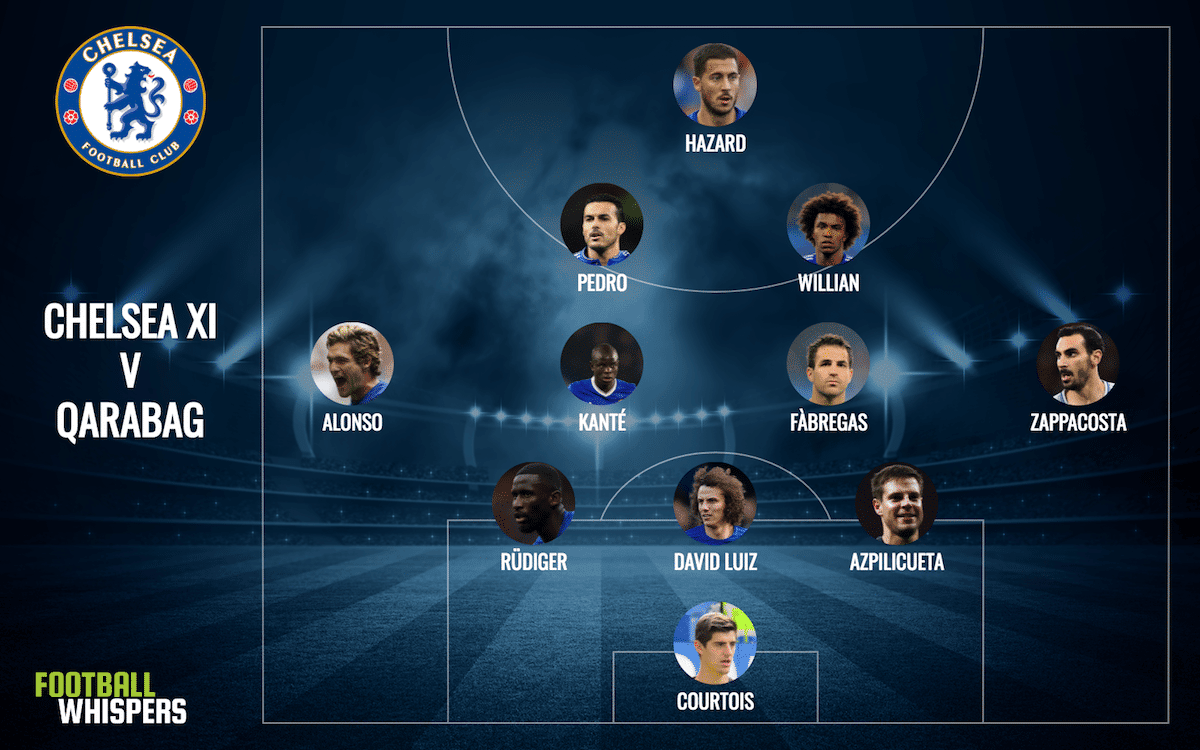 The big Belgian stopper can't have enjoyed many quieter nights than this. In 90 minutes Courtois did not have a save of note to make and there was little he could do about Qarabag's one chance of note when Michel hit the bar.

The Spaniard was never defensively troubled and made a couple of good early blocks when Qarabag, briefly, threatened to make a contest of the game.

In the end, though, he did not have to be anywhere near his best and finished with 100 per cent success rate for tackles and aerial duels, as well as completing 92 per cent of his passes.

Reinstated to the heart of Chelsea's defence after missing their last two, the flamboyant defender had a quiet night by his standards but did his chances of forcing his way back into Antonio Conte's starting XI no harm either.

Solid, reliable and unspectacular, Luiz's performance was the sort pundits and managers have long demanded of him, albeit the calibre of opposition ensured he was in for a routine night's work.

The one blemish was his part in allowing Michel the freedom to thump against the bar but he was not the only one culpable.

After a quiet first half in which he had little to do, the German World Cup winner grew into the game in the second period and came out from the back to join the attack on more than one occasion.

He looked more comfortable doing so having switched to the right of the back three following Cahill's introduction and it was his slide-rule pass which picked out the run of Álvaro Morata for a chance following his introduction.

With Chelsea able to direct much of their play through Qarabag's soft core it was a quiet night for the former Torino man.

Still, Zappacosta got high and wide, always offering an option and running gamely at left wing-back Ansi Agolli. But in truth, he did not really impact the game.

The workaholic French midfielder will certainly have had harder evenings with Qarabag's limited threat meaning he was not required to hurtle around with his usual intensity putting out fires.

Instead, he was able to play in the hosts' half more often with the ball at his feet. The one blot on his copybook was the moment's hesitation which led the hosts' best chance but Kanté was not the only player caught flat-footed as Michel burst into the box and struck the crossbar.

This was the sort of game the Spanish orchestrator must love. With Qarabag down to ten men after 21 minutes the hosts' ambitions were severely stunted and Fàbregas thrived.

With minimal pressure on the ball, he was allowed to stride forward at will and pull the strings for Conte's side without the Azerbaijani side ever getting close enough to stop him from controlling proceedings.

His set pieces were a threat throughout and a comfortable night's work in which he barely broke sweat was rounded off with two well-taken penalties, the second of which counted.

The first Chelsea player replaced with an eye on Saturday's game against Liverpool, the Spaniard did little in his 58 minutes on the field but his withdrawal was more to do with the lack of depth on the left in Conte's squad.

Still, he was largely ineffectual despite getting high up the field but that was largely to do with the joy the Premier League champions had playing through the middle.

Thanks to Pedro's renaissance at Stamford Bridge the Brazilian has largely been restricted to the role of super-sub under Conte. But he gave a timely reminder of his qualities in Baku.

It was Willian who won both of the Blues' penalties with his direct running causing Qarabag problems throughout. The red card for the first appeared a touch harsh but he was certainly entitled to go down under a blatant tug.

And he added a second late on, letting fly from the edge of the box and picking out the right-hand corner of the goal to complete a productive evening.

Prior to kick-off it looked as though the Spaniard would lead the line for the Blues in the absence of a recognised centre-forward. But it quickly became apparent he was playing off of Hazard – much like he would normally as one of two No.10s behind the main striker.

The former Barcelona forward was a menace throughout, dropping deep to pick up possession and driving Chelsea forward. He had a good chance to add a third early in the second half after going through one-v-one but wasted it.

Surprisingly positioned at the tip of Chelsea's front three, Hazard thrived in his new role and linked up well with Willian and Pedro behind him.

The former Real Madrid transfer target had, however, been a largely peripheral figure until he was given the chance to open the scoring from the penalty spot when Willian was pulled down.

After dispatching past Ibrahim Šehić he came to life and supplied the assist for Willian's second.

Gary Cahill (for Marcus Alonso) – 6: A nice quiet introduction for the Chelsea skipper who took up the centre-back spot on the left of the visitors' defence.

Álvaro Morata (for Eden Hazard) – 6.5: Had an immediate chance to get on the scoresheet but failed to find a way past Šehić who did well to parry.

Danny Drinkwater (for N'Golo Kanté) – 6: The deadline-day arrival is still easing himself into full fitness and life at Stamford Bridge.