The announcement was so popular that in the immediate aftermath Middlesbrough’s website crashed. There were jubilant responses on Twitter. Fans made clear their relief at the news most felt had been a long time coming.

Tony Pulis had been sacked. After a season of turgid, dismal football at the Riverside, a season in which Middlesbrough missed out on the playoffs having been ensconced in the top six for most of the year, there were very few dissenting voices. This, for most, was a welcome update.

Boro’s supporters, by the end, had grown tired of Pulis and his insistence on playing the most functional, one-dimensional football imaginable. It was not that his team missed out on the playoffs; it was the manner in which they did so.

They got close: one point behind sixth-placed Derby after winning their final two games of the season. But they fell short, and that, ultimately, was inexcusable. Even if they had reached the playoffs, it would not likely have changed the opinions of most Middlesbrough fans.

The issue, for Pulis, is that his methods are increasingly outdated. Fans are no longer content to pay to watch 90 minutes of unadventurous, ugly football, regardless of the end result. Middlesbrough’s fans, by the end of this season, approached matchdays with a feeling closer to dread than anticipation. 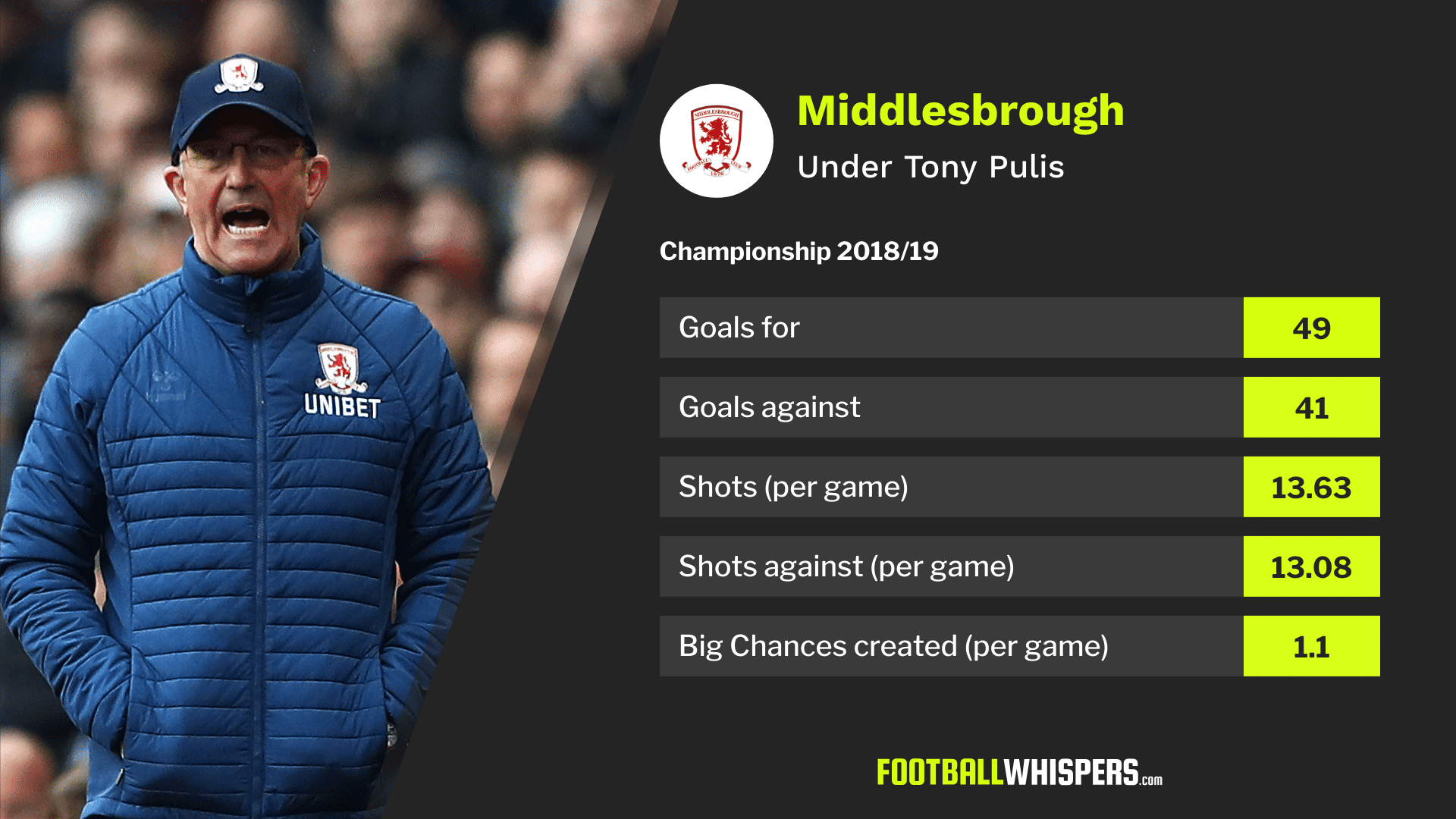 That is because they knew what would, without fail, be served up by Pulis’ team. Boro scored just 49 goals in 46 league games, fewer than all but four teams in the Championship, and two of those were relegated. That they finished seventh was due to a typically solid and well-organised defence: they let in just 41 goals, the joint-best record in the division.

Pulis has argued that coming so close to the playoffs was a success, given he sold close to £50million worth of players last summer – the likes of Adama Traoré, Patrick Bamford and Ben Gibson all left – in order to comply with Financial Fair Play regulations.

For that, he deserves credit, though Middlesbrough are hardly poverty-stricken. “Two years ago we invested heavily in the squad in terms of transfer fees and salaries in an attempt to regain our Premier League status,” chairman Steve Gibson said in a club statement. “This happened before Tony’s arrival.

“Over the past 18 months Tony has been proactive, not only in the ambition to win football matches and promotion to the Premier League, but also in addressing our financial position in order to comply and respect the Championship Fair Play criteria.

“He has ensured that the club is stable and strong for the future. He leaves us in excellent condition.”

On the surface, then, it appears Pulis has done a respectable job. This season was hardly disastrous; it did not set the club back several years and they will again be amongst the favourites to challenge at the top of the Championship next season.

As always, though, with Pulis, it all comes back to his dogmatism, to his refusal to even consider the possibility of playing more expansive football. The club’s fans, for the most part, were fed up with it, and wanted him gone.

It did not help that Middlesbrough were often poor at home. They won just ten of their 23 games at the Riverside, losing seven and drawing six. They scored just 23 goals and often played unnecessarily defensively for a promotion-challenging team on their own turf. It was much different away from home, though.

Over the course of the season, Boro created an average of just 1.1 big chances per 90 minutes, some way off the division’s pacesetters. They completed an average of 344.13 passes per game, which ranks 19th in the Championship.

None of this is surprising, of course, but it highlights the dearth of entertainment at Middlesbrough over the course of the campaign.

Inevitably, such a style of play does not endear a manager to the fans, particularly in the modern game, where most supporters feel entitled to a certain level of entertainment (Marcelo Bielsa and Daniel Farke have certainly provided that at Leeds United and Norwich City this season).

There are others, too, who have suffered similar fates because of their refusal to conform to modernity.

Chris Hughton was dismissed by Brighton largely due to his side’s consistently dour performances in the Premier League. Sam Allardyce and Mark Hughes are out of fashion, too, since their most recent and forgettable tenures in the top flight.

It seems clubs are growing increasingly weary of Pulis and his ilk. The former Stoke and West Brom manager is undoubtedly effective in the right circumstances. But, after a while, he prompts a feeling of existentialism from fans: Why are we watching this unapologetically drab football? Would success even make it all worthwhile?

The answer to the latter, for Middlesbrough, proved to be no. Pulis is gone, and he must now consider his next step wisely. If he does not change his approach, he may find himself faced again and again with an alienated group of fans and a dissatisfied chairman.