From playing non-league football in 2011/12 to helping Leicester City pull off one of, if not the, most shocking of title wins. It was the stuff of Hollywood.

He ended that campaign with 24 goals, finishing just one behind Golden Boot winner, Tottenham Hotspur’s Harry Kane, as the Foxes lifted the Premier League trophy.

He was one of four Foxes players named in the PFA Team of the Year, and was also named as the FWA Footballer of the Year, earning himself a call-up to England’s Euro 2016 squad.

Perhaps unsurprisingly, Leicester were unable to replicate their heroics in 2016/17 and like many of his team-mates, Vardy had a much more disappointing campaign, managing just 13 Premier League goals.

That’s a total he’s already matched in 2017/18 despite having played nine fewer games.

After seven goals in his first 22 games for club and country this season, the 31-year-old has started to look his prolific self once more. He has seven in the last ten matches, including one in each of his last four.

He’s fifth in the race for the Premier League Golden Boot, and while he’s unlikely to catch Alexandre Lacazette.

Vardy’s weekend strike against Manchester City took his tally to 23 goals in 43 games against top six sides. That's the most of any player in the top flight over the past four seasons and demonstrates his big-game mentality.

He also became the first player to score against the top six of City, Manchester United, Chelsea, Arsenal, Liverpool and Tottenham in the same season.

Of course, the likes of Kane and Sergio Agüero can’t do that as they play for a top-six side, but it shows the Foxes’ striker’s elite level, even if he isn’t playing for one of the country’s biggest clubs.

“The thing with Vards is you know whatever team he plays in he will be a threat,” Harry Maguire. told the Leicester Mercury after the match.

“You have seen late on he had another header when it was 4-1 that maybe on another day he should score it but we know with Vards against top six teams we know he will always score goals. His record and his pace causes defenders problems.”

But how does his current form compare to that of Leicester’s title-winning season? We’ve taken a look.

The graphic below shows Vardy was at his peak when the Foxes won the title, especially in ‘expected’ stats. 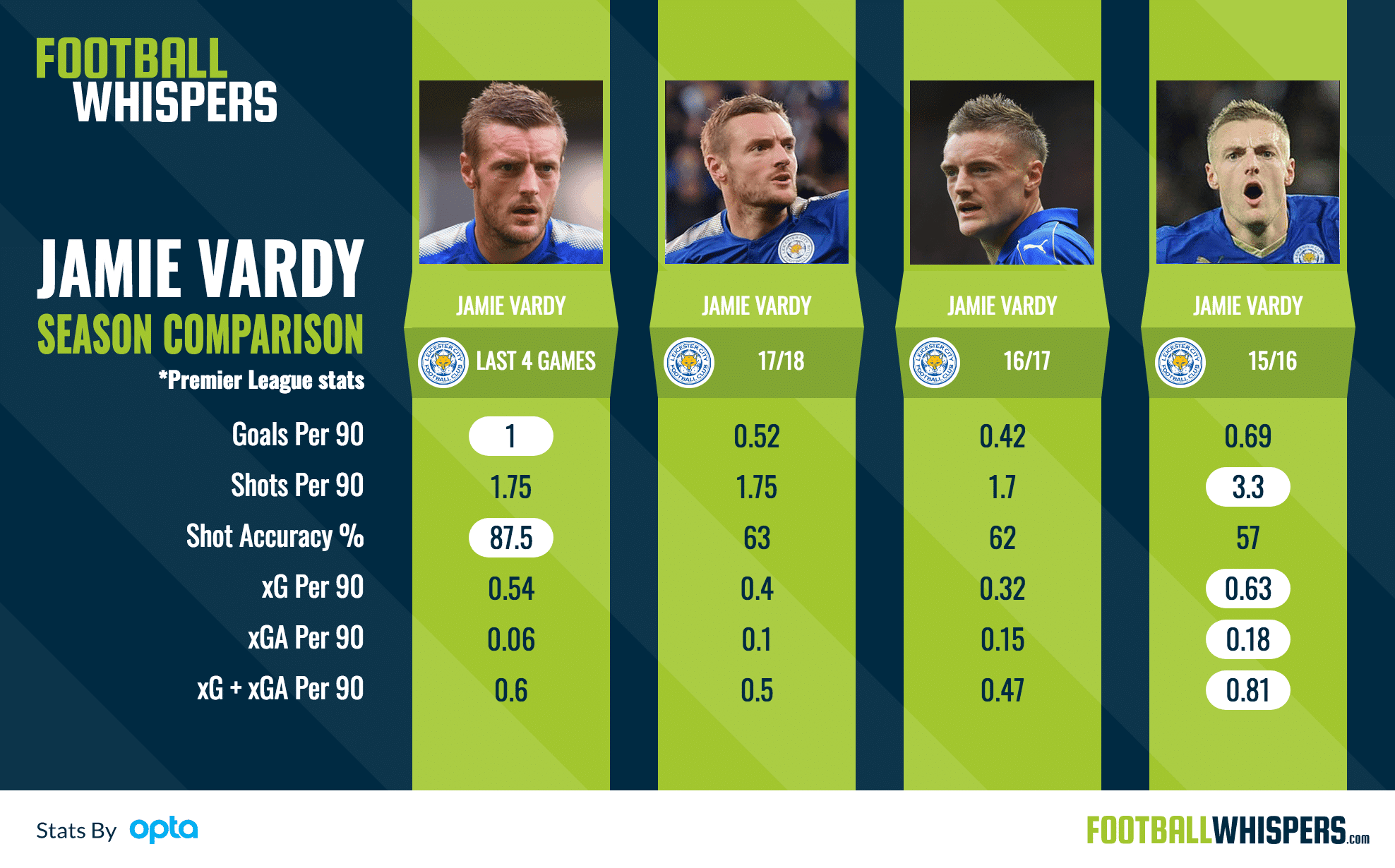 What’s more, looking at the last three years as a whole, he was scoring more goals and taking more shots per 90 minutes in that campaign too.

The stats show the England international dipped in 2016/17, but he has stopped the downward spiral this season.

However, over the last four games, there’s been a noticeable improvement though. His goals per 90 has increated, as well as his shot accuracy.

What’s more, hitting form before a World Cup would be great news for England. Vardy and Kane could terrorise defences, although the Three Lions’ chances of success in Russia are slim, whether Vardy is on form or not.

But for his club, especially with the Riyad Mahrez sulking saga, it’s clear he’s key.

“I hope he will continue until the end of the season because we still need to play some great teams, like Tottenham for example near the last game of the season,” his boss Claude Puel is quoted as saying by the Leicester Mercury.

“It is important he continues his fantastic work. He shows his quality and he is a fantastic player and we love to have him in the team, like Mahrez.

“He is an important player. We give him all our support to continue his fantastic work.”

The Frenchman has revitalised Leicester, ending relegation fears and taking them to the cusp of the top seven. And it appears Puel has done the same with Vardy. Did someone mention something about a party?