After Memphis Depay, it's wise to exercise caution when it comes to Dutch ‘wonderkids.'

Depay has spent the last eighteen months rebuilding his career with Lyon after a fruitless two-year stint at Manchester United.

Touted as one of the most exciting talents to have emerged from Holland in recent years, Depay failed to live up to expectations and became a media punching bag after a series of indifferent displays coupled with ongoing struggles with his fitness.

Yes, ‘Dutch wonderkid' can often be a cursed term but hasn't stopped Eredivisie fans from getting hyped about the latest string of Holland's hot properties.

Three of them came off Ajax's ceaseless production line; Frenkie de Jong was a Barcelona transfer target this summer, Matthijs de Ligt is tipped for huge things while Justin Kluivert reportedly rebuffed interest from Manchester United before sealing a move to Roma.

The latest youngster making waves in the Dutch league, however, is PSV Eindhoven's Steven Bergwijn.

The 20-year-old winger spent two years in the Ajax youth set-up but left Amsterdam for Eindhoven in 2011. He spent time with PSV's second-string but has since firmly established himself as a first-team regular at the Philips Stadion, attracting interest from Arsenal, Liverpool and  Tottenham Hotspur at the start of the summer.

It seems, now, that following Kluivert's move to Serie A, Bergwijn is one more stellar season away from being snapped up by one of Europe's biggest clubs.

He's made headlines in recent weeks with three goals in his last two games, including the opener in the second leg of PSV's Champions League qualifying victory over BATE Borisov, setting his team on the path back to Europe's most prestigious club competition having missed out last season.

As a reward, Bergwijn will be afforded six high-profile auditions for potential suitors; home and away games against Barcelona, Tottenham Hotspur and Inter.

Catch the eye at the Camp Nou, Wembley or San Siro and Bergwijn may well see demand for his signature increase drastically by the winter transfer window.

His sparkling form of late generated buzz about a call-up to the Netherlands squad ahead of Thursday's friendly against Peru and the Nations League clash with France on Sunday.

He was not included in Ronald Koeman's squad but only on the grounds that he was deemed, by the former Southampton and Everton boss, as too important to the U21 side, who have a crucial Euro U21 qualifier against England on Thursday.

After his eight goals and seven assists helped PSV to their 24th championship in May, Bergwijn has started this season as he means to go on under new boss Mark van Bommel.

He has thrived on the right flank in van Bommel's 4-3-3 with Hirving Lozano on the opposite wing and Luuk de Jong through the middle. It's a system that is working to optimum efficiency with PSV having accrued a maximum 12 points from their opening four games, scoring 14 goals and conceding just three in the process.

Bergwijn's pace and eye for goal is a major driving force behind his side's intense, attractive attacking football. Blessed with the ability to change direction rapidly and seamlessly, Bergwijn relishes defenders getting touch-tight to him.

Just as they go in for a tackle, he's already haring past them and while he offers an excellent outlet out wide, the fluidity with which PSV's front three operate allows him to influence the game centrally.

Take his second goal in the 6-1 thumping of Willem II as an example.

Bergwijn is ready to receive the ball in midfield on the half-turn, aware of the pocket of space between him and the two defenders. 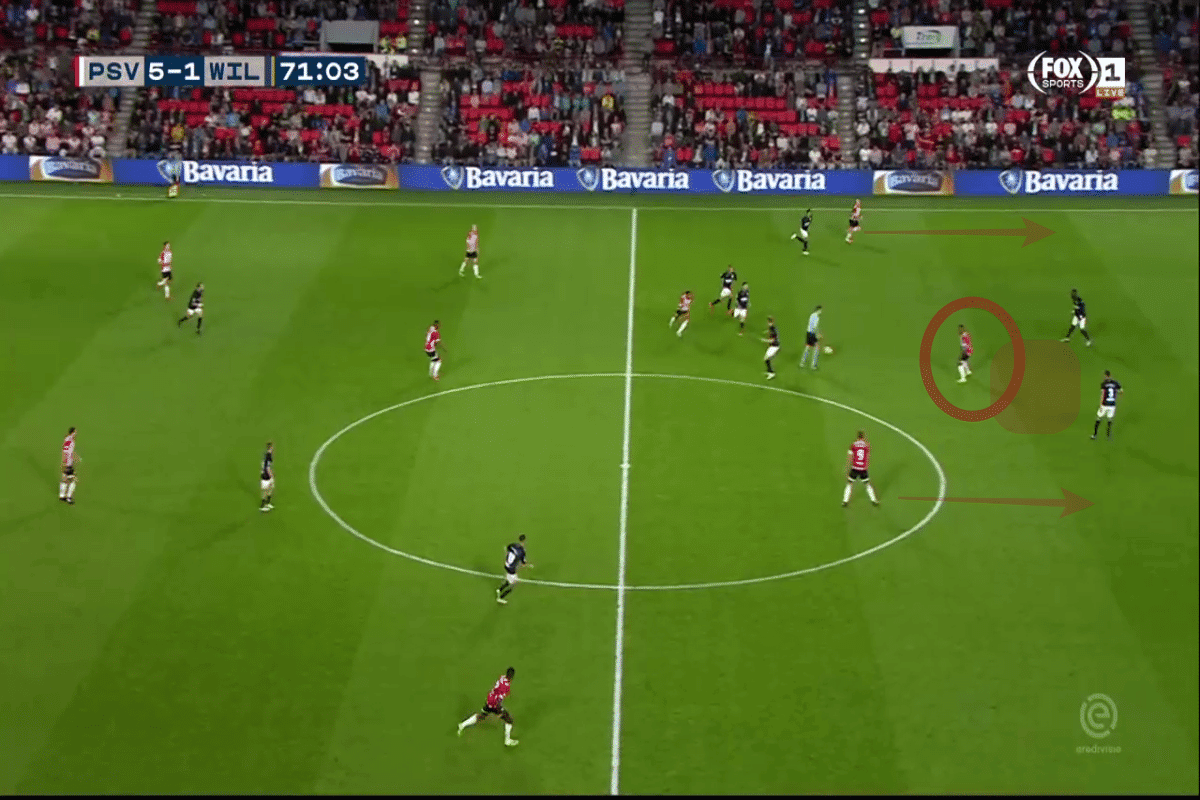 His mind is made up. Immediately after getting the ball, his head is up and he slips the left-back, Angelino, in. 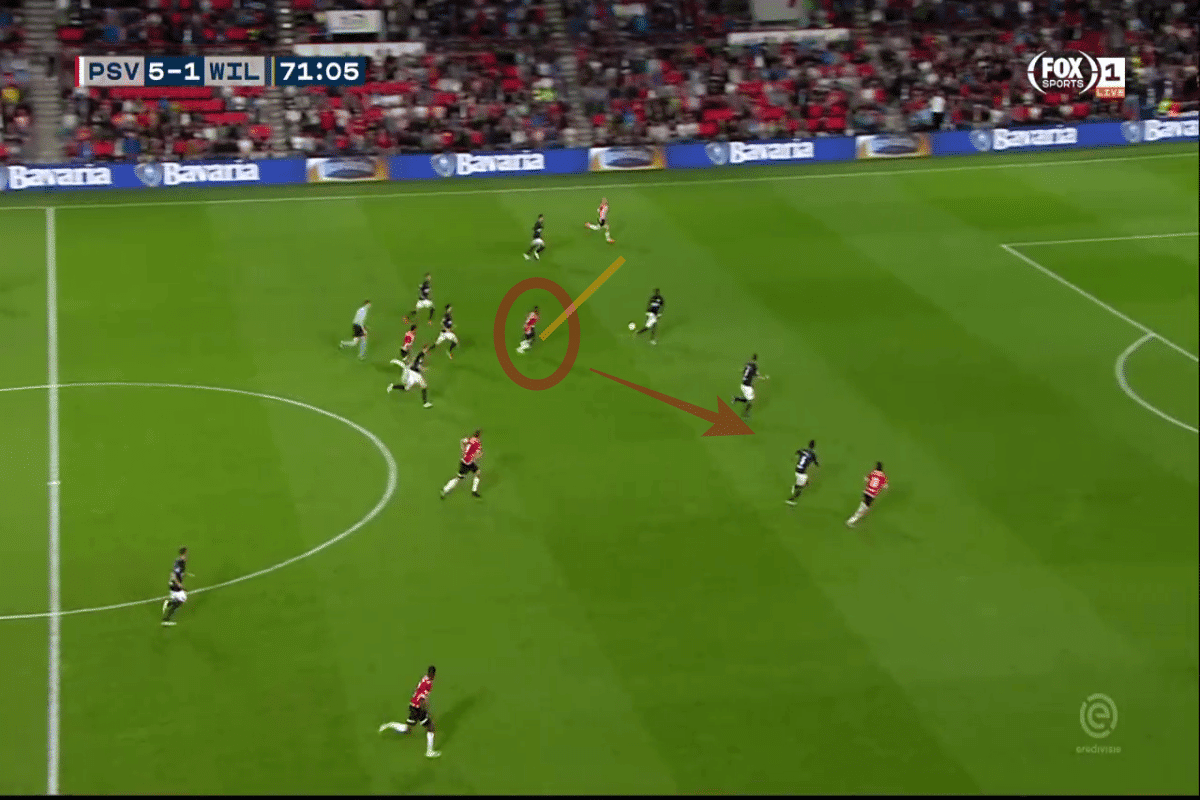 Rather than admiring his pass, Bergwijn tears into the box at breakneck speed. 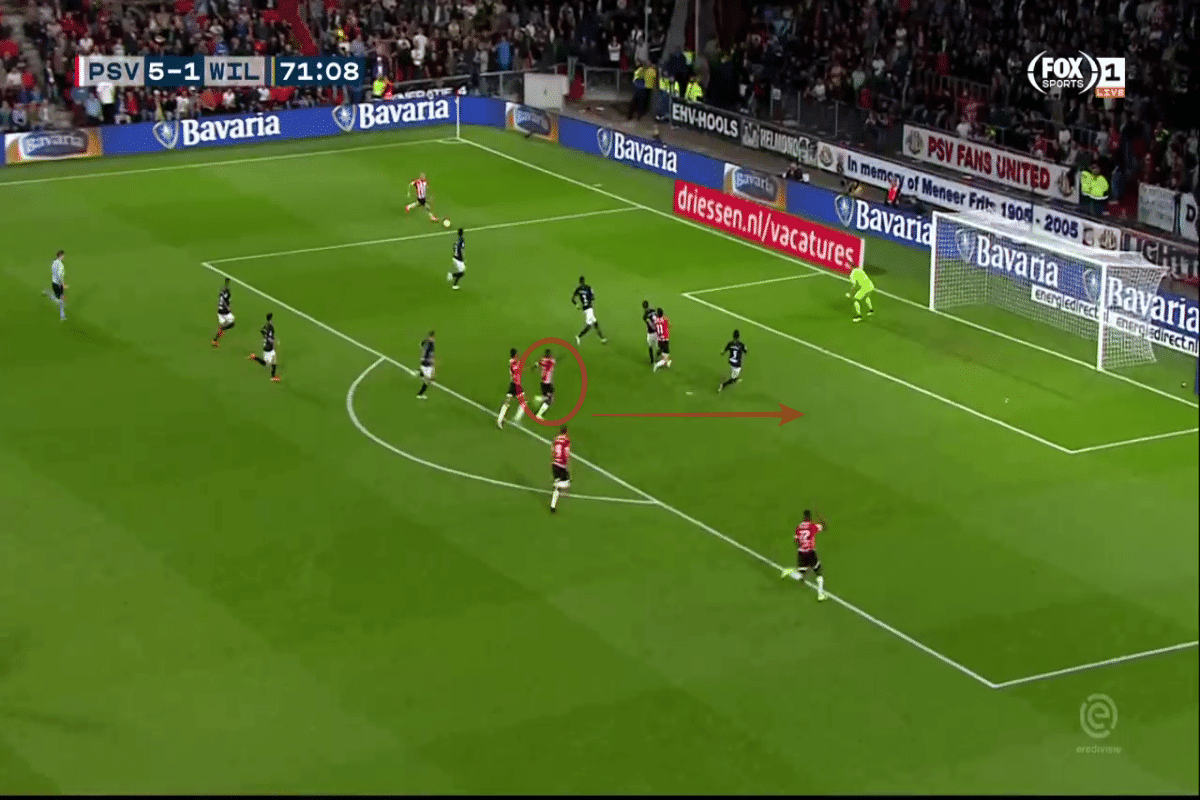 Raising his arm, he bursts into towards the six-yard area and heads home to complete the rout. The cross from Angelino was pinpoint, but it was a goal made of Bergwijn's vision, pace and sheer determination. 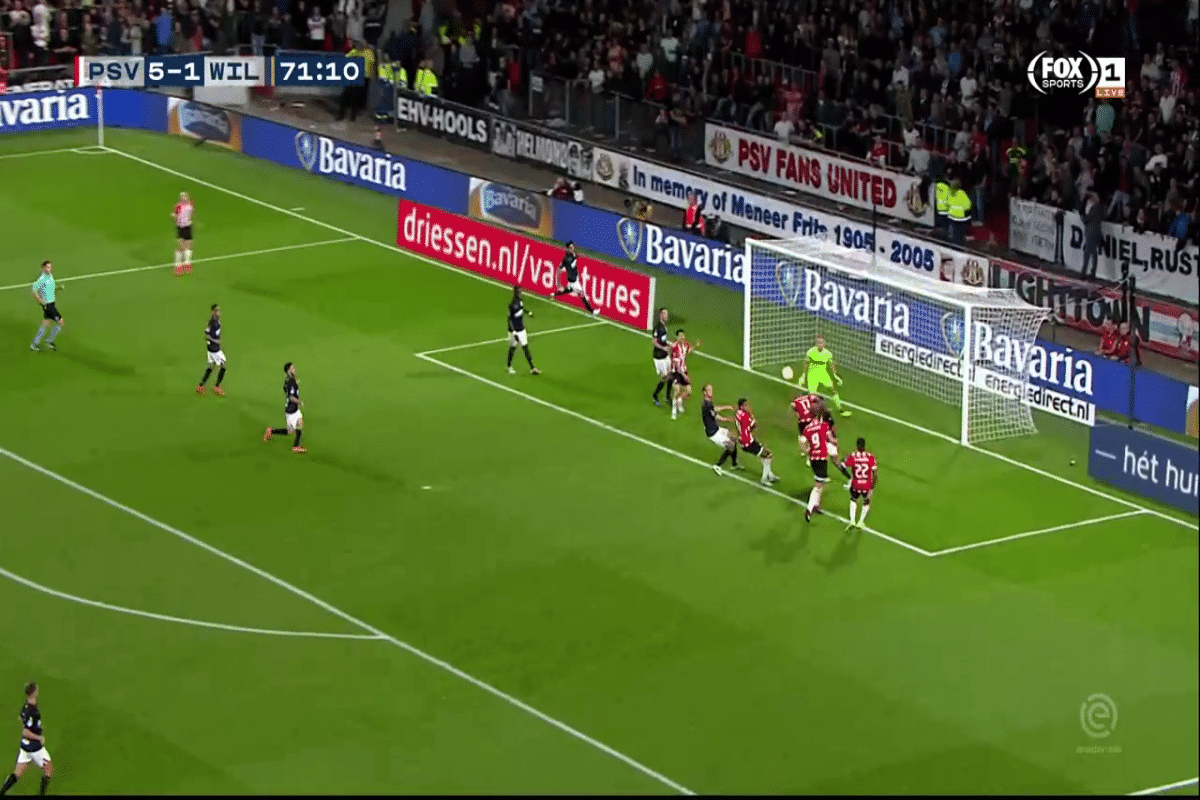 He is capable of different types of goals, of course. His opener in that game was something you'd expect to see from a winger. Having switched over to the left, Bergwijn drifted inside before picking up the ball, dropping his right shoulder and curling a low, rasping drive beyond the goalkeeper from 20 yards.

Against BATE Borisov, his quick-thinking and sharp movement created the goal. 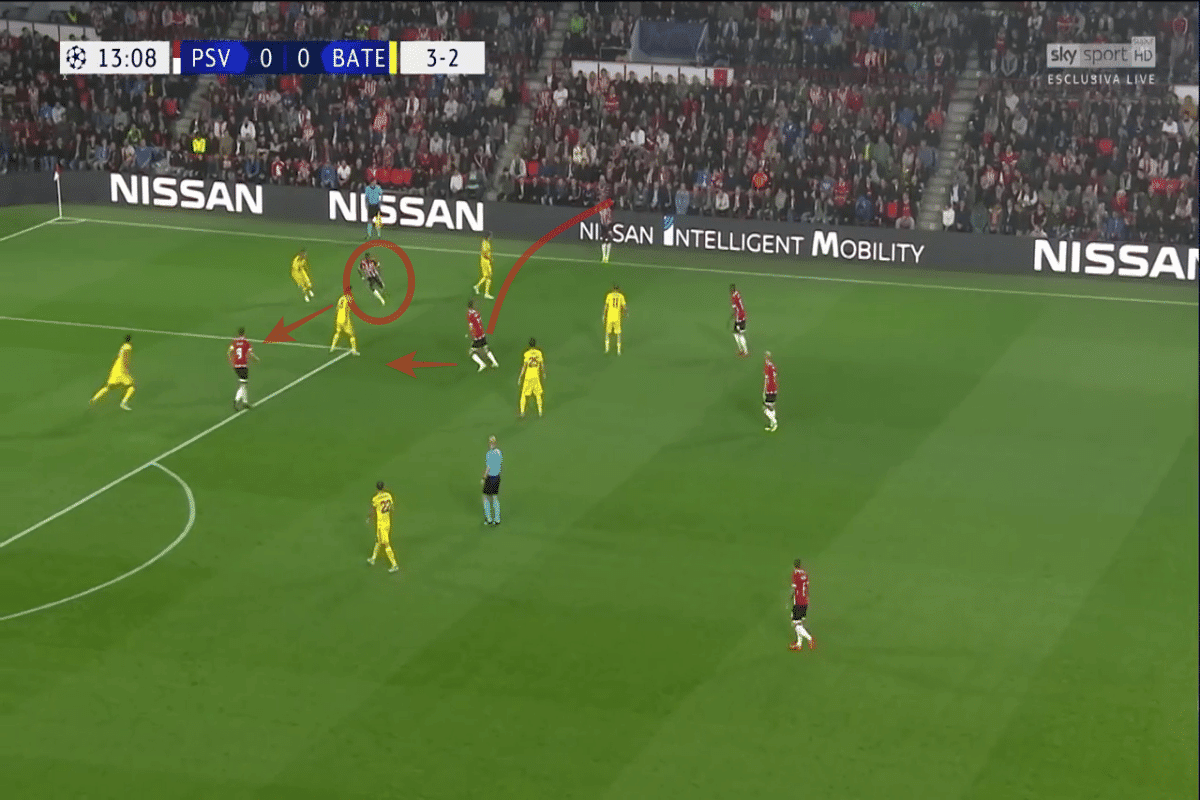 Initially offering himself as a decoy option for the thrower, Bergwijn turns back sharply, spots that de Jong is the target and makes his run. 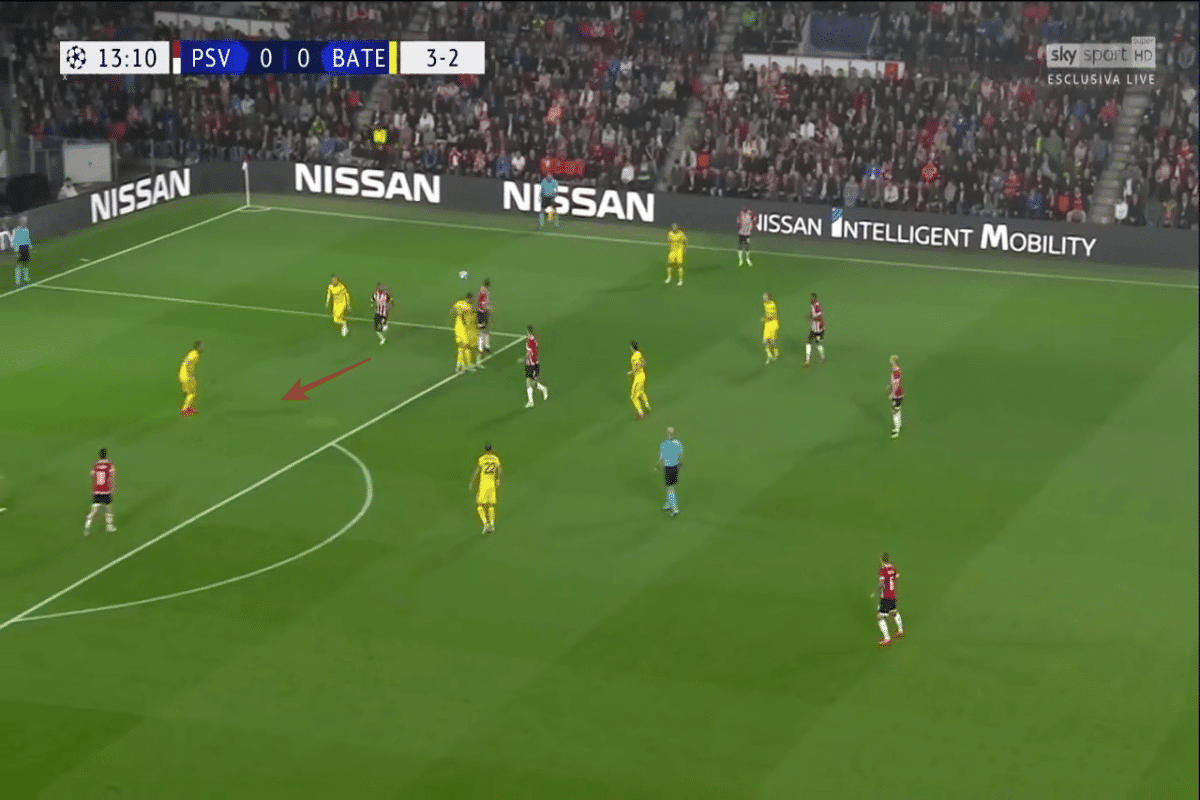 The striker wins the header and creates the chance but Bergwijn still has plenty to do. 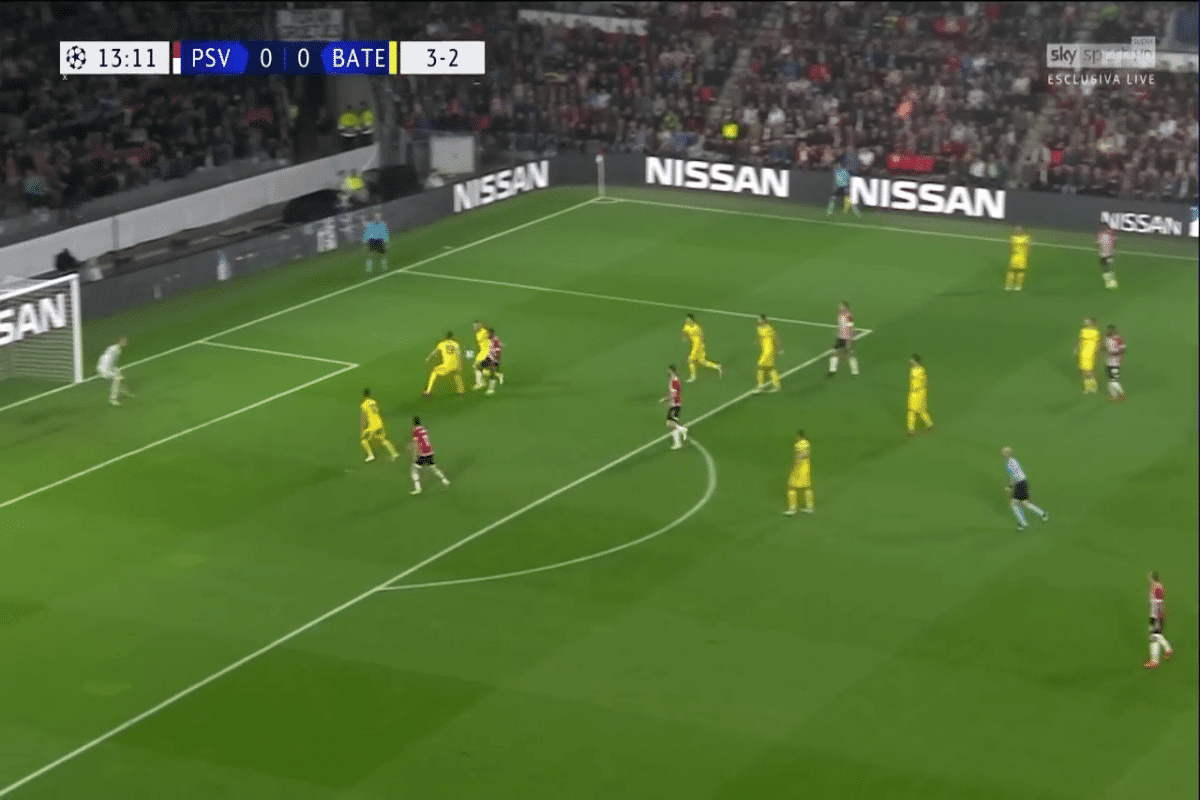 His first touch is perfect, both controlling the ball while shifting it away from the two defenders to give himself the chance to shoot. 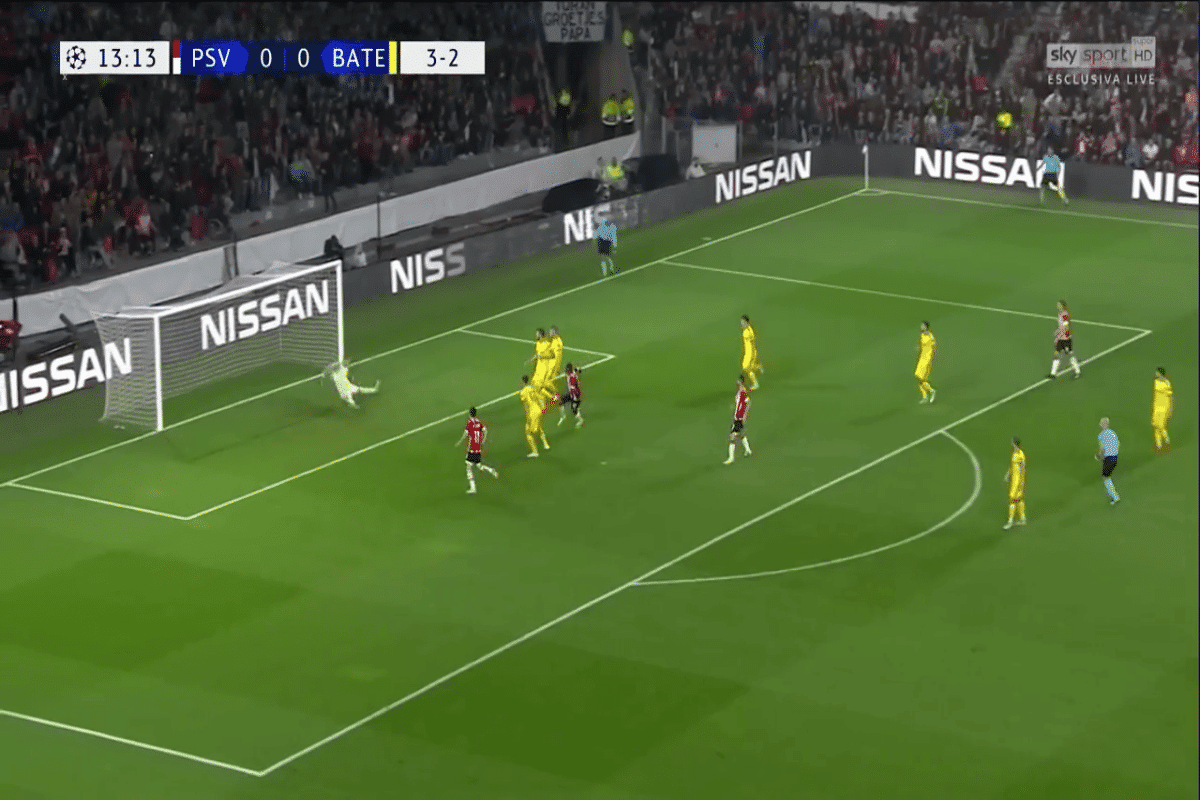 Keeping his balance on his weaker left side, he confidently slides the ball under the keeper to open the scoring.

Bergwijn's other goal this season – in the opening Eredivisie victory over Utrecht – was a stinging right-footed piledriver, suggesting that there isn't much he can't do from 25 yards and in.

The PSV starlet's stock is rising. Of course, he will certainly recognise the value in producing when he comes up against elite opposition in the Champions League.

Deliver on the biggest stage and he'll be flying.