Brendan Rodgers has a couple of decisions to make for Tuesday night’s heavy-weight clash between Celtic and Paris Saint-Germain.

How on earth do you stop Neymar, Kylian Mbappé, Edinson Cavani, and the other, just as dangerous, supporting cast?

It’s enough to give you nightmares and the Northern Irishman may wake up with a few cold sweats this week.

The other problem Rodgers will have is if he spends too much time worrying about how to stop the attack, you almost hand PSG an opportunity to punish you further.

In the five games that have been played in Ligue 1 this term, the French side have scored 19 times. Neymar and Cavani have finished 11 of them and the Uruguayan striker especially thrives off getting on the end of crosses.

For all his faults as a forward who misses more chances than he should. Give him the opportunity to hit the ball first-time and their are few in the world better at providing a finish.

What makes PSG so dangerous in this respect is the amount of crosses the full-backs deliver each week.

They are averaging 21.2 per 90 minutes, and although this doesn’t lead Ligue 1 – Monaco attempt 23.4 and Montpellier 27.4 – it’s the sheer volume that come from the full-backs that should worry Rodgers.

As explained in our tactical analysis, if PSG play 4-4-2, the temptation is to play narrow and attempt to limit the space they have, in and around the box, however, this just invites their full-backs to bomb forward. Something they really don’t need an invitation to do.

Since Neymar arrived, and the Brazilians ability to drift inside and play the No.10 playmaker role, defences have been giving up the battle down the flanks.

In the 3-0 win over Guingamp, Layvin Kurzawa and Dani Alves combined for seven crosses. In beating Toulouse 6-2, the same duo attempted nine – with Di Maria and Neymar adding 14.

Then against Saint-Etienne, this time it was Thomas Meunier and Yuri Berichiche combining for ten. On Friday, the Belgian and Spaniard managed 13.

All four, no matter what combination is played, want to bomb forward at every opportunity. They are deadly on the break, but just as productive when you sit back.

The temptation is to over-compensate for Neymar, Mbappé, Di Maria or Draxler, but that just leaves more space for the defenders coming from deep. 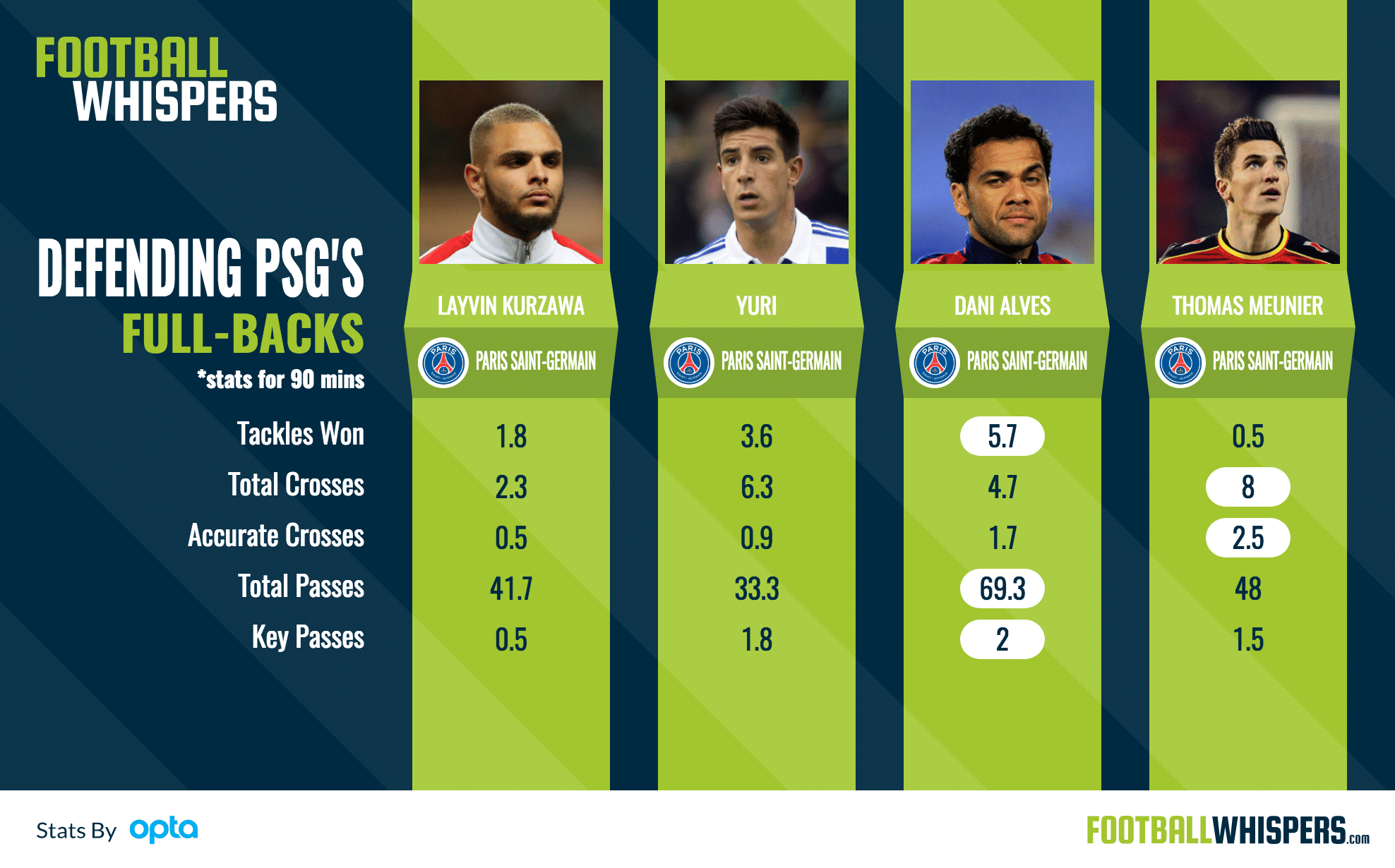 No full-back in France finds the target from crosses more often than Meunier (2.5), Dani Alves is fourth on 1.7 and Yuri 18th. All three also make the top 20 in terms of inaccurate crosses, with Meunier second on 5.5.

However, because they are all so good at going forward, Unai Emery has to expect some concessions from the defensive side of their game. Meunier showed against Metz he can be a liability on the other side of the ball.

Dani Alves especially, because of his passion from getting into the opposition penalty area, he can leave space in behind. This is the downside of the 4-4-2, as it could leave Marco Verratti or Thiago Motta with a lot of space to cover from midfield.

Yuri, a summer signing from Real Sociedad, is not known for his defensive strengths. Layvin Kurzawa is arguably the best at the back out of the four. If they can limit their mistakes and play simple football, that's all that is needed.

What they do best is win the ball, then push on into the final third. If they are playing 4-4-2, PSG can look more like 2-4-4 or 2-2-6. It's more a case of you stopping them, rather than the French side worrying about what Celtic or other opponents have up their sleeves.

Celtic are going to have to deal with constant deliveries into their penalty area on Tuesday. Their success in doing this well could determine how the game is won and lost.

Playing for Belgium against Gibraltar, Meunier scored a hat-trick will picking up four assists. Not bad for a right-back and scary when you realise he is the back-up for Dani Alves, perhaps the best player in Europe in his position.

Stop Neymar, stop Mbappé and stop Cavani, Celtic will have a chance, but then they have to contend with the full-backs. They could be the key to not only PSG’s success on Tuesday, but in becoming contenders to win the UEFA Champions League this season.