The Parisians will host Saint-Etienne for the second meeting of the season at Parc des Princes this weekend. We have the best predictions and tips for this Ligue 1 fixture. Read on for our detailed analysis and free picks for this game.

PSG is at the top of Ligue 1 table with 59 points and 15 places clear of 16th placed Saint-Etienne. The visitors are struggling to break away from relegation threat even as they make this trip to Paris for an encounter with Ligue 1 giants, PSG. Here are our best free predictions for this match.

PSG should easily win this game and we expect them to do it right from the first-half. The Parisians won the reverse match 3-1 and have not lost to Etienne in the last to Saint-Etienne in the last 25 meetings across all competitions.

The only worry for PSG is the lack of many clean sheets this season. Saint-Etienne is hot scoring form after finding the net at least twice in each of their last three games. Moreover, the visitors only failed to score against PSG in only one of the last five meetings.

Place your bet with any of the top UK bookies below with the highest odds for this PSG vs Saint-Etienne fixture.

The Parisians are in the race to reclaim their Ligue 1 crown from Lille. This fixture against Saint-Etienne could see them end the month of February with 62 points. They are currently 13 points clear of second-placed Marseille.

PSG is currently the best on home record after bagging 11 victories and 1 draw from 12 home games so far in the current season. It means the Parisians are yet to lose a game on home soil, a form they hope to extend when they host Saint-Etienne in this 26th game of the season. Moreover, PSG boasts the best home defence after leaking only six goals and scoring 28 from 12 games.

The visitors are ranked 17th away from home. And despite a strong resurgence that has seen Saint-Etienne get 2W and 1D from the last three games, they have found it hard to get clean sheets away from home. For PSG, inconsistencies at the back have handed them rare clean sheets in the league, which could be the case in this match against Etienne. 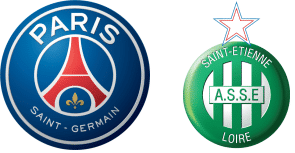 Pierre Gaillouste will be the match referee on matchday.

How did these teams fare in the reverse meeting?