The Champions League semi-finals are here and the first leg of the PSG vs Man City matchup is scheduled for Wednesday. With that in mind, we have prepared a preview of this game, and a few of our favourite betting tips.

Both teams are hoping to win their first Champions League trophy, and they are in great form. So, this is a tough match to offer a prediction, but we have some free betting tips to help you out:

Odds can change at any time, so make sure to check them with your bookie before you place a bet. Our recommended bookmaker for this game is Ladbrokes.

The favourite in this game is Manchester City, which is a bit of a surprise simply because they are guests in this game. However, City is in fantastic form in 2021 and they enter this game with a bit of a confidence boost after winning their first trophy of the season, the Carabao (EFL) Cup. Meanwhile, Paris Saint-Germain is in a grueling fight for the title in Ligue 1. Still, after reaching the finals last year, we feel that PSG is capable of going all the way this year, and they need to beat Man City first in order to do that.

Both teams have gone over 2.5 total goals in two of their four matches in previous Champions League knockout phases, while PSG has been playing games with many goals the entire season. Their average in CL this season is 3.2 goals per game. Meanwhile, City has an average of 2.4 goals per game and they've kept a clean sheet in an impressive 70% of their CL matches. However, both teams have scored in 70% of PSG games and we expect to see this again, which would be a great start to getting over 2.5 total goals.

Since we expect PSG to win and we expect to see a few goals, we decided to bet on someone from PSG to score. Since Mbappe might not be fully fit for this game, we decided to go with Neymar, the team's second-best goalscorer in the Champions League this season. Furthermore, Neymar is third in the entire CL with six goals.

Top odds and helpful stats for PSG vs Man City

You can find the best odds for PSG vs Man City right here, along with some important stats for the match:

PSG vs Man City preview: Both teams looking for their first CL title

The season in France has been unexpectedly exciting since PSG is fighting for the title with Lille and Monaco, with the Parisians currently being one point behind Lille at the top. In Ligue 1, Paris Saint-Germain has won six of their last eight games and they are on a three-game winning streak, but one of these two losses came in a direct duel against Lille. In the Champions League, PSG has eliminated the current champions Bayern Munich in the previous round and they are hoping to finally win their first title in the competition. Bernat, Letellier, Marquinhos, and Rafinha are out, while Mbappe is questionable due to injury.

The Citizens have won their first trophy of the season over the weekend after beating Tottenham Spurs in the EFL (Carabao) Cup. Of course, they are also the main favourites to win the English Premier League since they are 10 points ahead of their city rivals Man Utd with five games left until the end. Manchester City has won 19 out of their last 21 Premier League games and they have eliminated Borussia Dortmund in the previous round of the CL, so they are in an amazing form. Furthermore, they don't have any injury issues at the moment, so Guardiola will be able to field the strongest team against PSG.

FAQ for PSG vs Man City 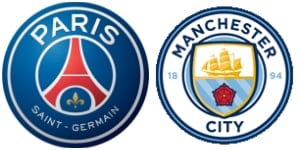