While countless Premier League clubs got swept up in the furore of the January transfer window, Southampton kept their noses relatively clean.

They lost Virgil van Dijk to Liverpool but banked a world record fee for a defender. And the Saints then bolstered their attacking ranks by bringing in Guido Carrillo from Monaco – and if the Argentine forward can transfer is form from Ligue 1 to the Premier League then he'll be a real handful.

The only disappointment was Mauricio Pellegrino and the Saints were unable to get a deal for Quincy Promes completed. Sky Sports News claimed Spartak Moscow wanted £30million for the Dutch international, but Southampton were only willing to pay £25million, which would've been a club-record fee.

Promes was targeted because of his attacking verve. He scores goals and that is something Southampton have lacked this season. The Saints are are averaging one per game and while that may just be enough to keep them up this season, it isn't a recipe for long-term success.

Which is why Southampton are, according to reports, going to once again target Promes, a one-time Chelsea and Liverpool transfer target, in the summer.

Though primarily a wide forward, he drifts into central areas on a regular basis, similar to how former Saint and now sinner Sadio Mané does. Promes has averaged a goal every other game in the Russian league since his move back in 2014.

And while it's a different level of football, his traits are transferable. The 26-year-old has the ability to play anywhere across the front line but he tends to start on the right hand side for both club and country.

if he joins he's likely going to be battling it out with Sofiane Boufal and Nathan Redmond for a place in Pellegrino's starting XI. We've taken a closer look at how he fares when compared to the current Southampton wide players. 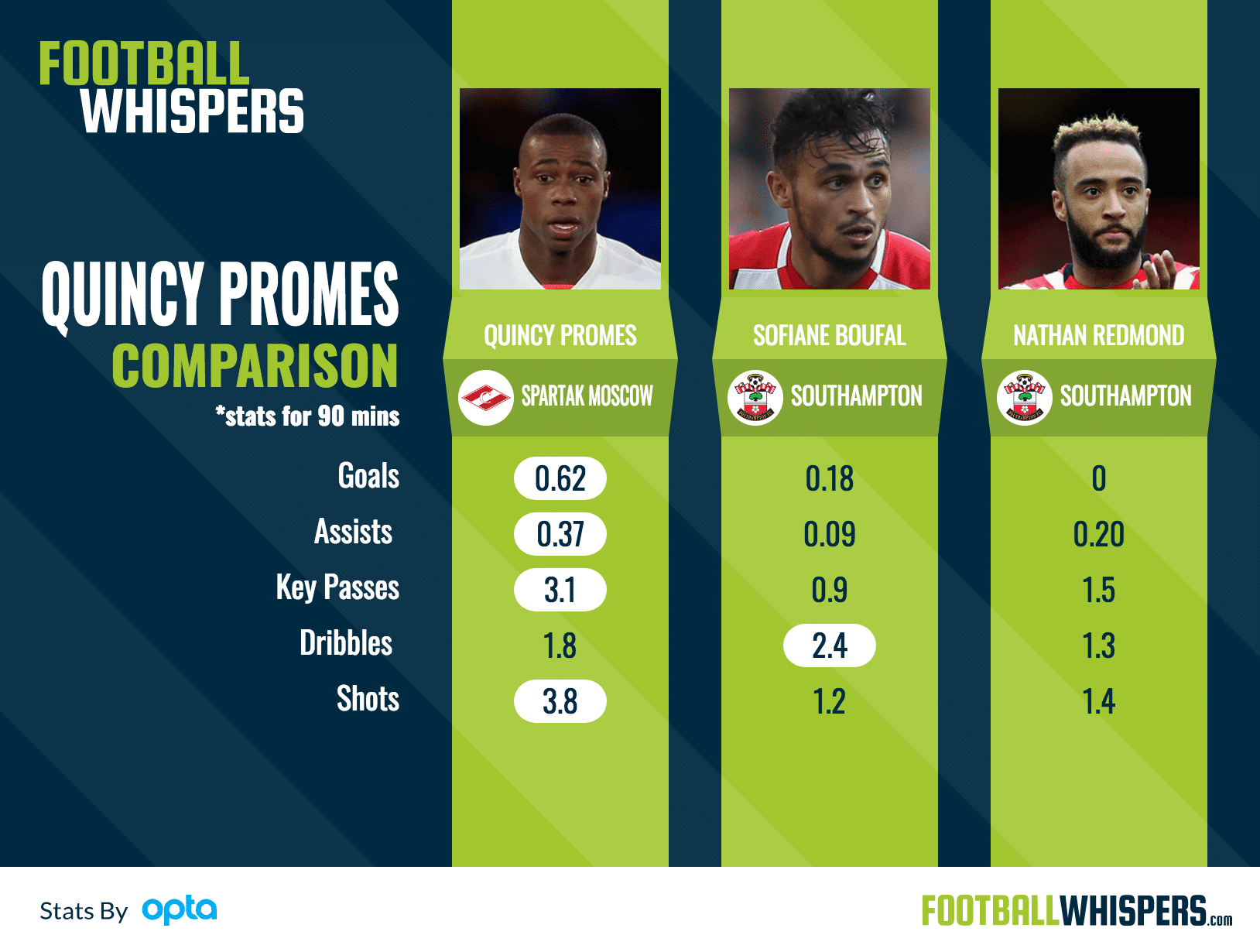 Immediately you can see that Promes has an end product. Whether he's putting the ball in the back of the net himself or assisting a teammate, he's involved goals.

It's unlikely he'll be as prolific in the Premier League as he is in Russia but even if his output halves, it's better than what Southampton have at their disposal.

Promes also averages more shots per 90 than Boufal and Redmond combined. He could cause havoc and if he's not the one scoring then Manolo Gabbiadini, Charlie Austin or Carrillo would certainly benefit.

Promes a bit older than the usual Southampton signing but, if he adapts, he could be worth every penny.

It's a 14 game shoot-out in the Premier League and all the Saints have to do is finish higher than three teams. With Promes in the team they're more likely of doing just that than they are without him.