After three years in charge of Bayern Munich, Pep Guardiola decided to call time on his stay in the Bundesliga at the end of last season.

The Catalan tactician sought a new challenge with Manchester City in the Premier League, hoping to conquer England in the same way he did in Spain with Barcelona and Germany with Bayern.

Guardiola’s time in Munich has been looked back upon with mixed reviews of late, with many observers feeling that, despite three successive league titles and two DFB Pokal triumphs, the former Barça manager’s failure to win the Champions League means he must be marked down.

Others feel that that line of thinking is wholly unfair. Guardiola took Bayern to the semi-final of Europe’s premier club competition in each of his seasons at the Allianz Arena. Once they’d reached that point, the necessary bit of luck – the rub of the green – that is universally required to win such a tournament, evaded them.

Experienced Italian manager Carlo Ancelotti was brought in to replace the outbound Spaniard.

The former AC Milan, Chelsea and Real Madrid coach is renowned for his laid-back demeanour and, given his vast experience, will not be over-awed by taking the reins of one of the world’s most famous clubs, or by stepping into the sizable shoes of the most successful manager of the last decade.

Ancelotti also comes with an impeccable Champions League record, having won the competition three times – only Bob Paisley, legendary Liverpool boss of the 1970s and ‘80s, can match the Italian on that front.

So, Bayern fans will be confident that their new manager will be able to surmount the one hurdle that proved too much of a stretch for Guardiola.

The one recurring criticism of Ancelotti is that he hasn’t won as many league titles as he perhaps should have. In 21 years of management, most of which with major clubs such as Milan, Paris Saint Germain and Madrid, he has won just three domestic league championships: Serie A in 2003-04, the Premier League in 2009-10 and Ligue 1 in 2012-13.

But, rather remarkably, every time Ancelotti has taken control of a club, he has bettered the win percentage he achieved with his previous employers. His first managerial role was with Reggiana in 1995, his win percentage there was 41.46 percent, then came Parma (48.28 percent), Juventus (55.26 percent), Milan (56.26 percent), Chelsea (61.47 percent), Paris Saint Germain (63.64 percent), and Real Madrid (74.79 percent).

A win rate above what he maintained at the Santiago Bernabéu would surely lead Ancelotti to a fourth league title in as many countries with Bayern.

And, so far, he is right on track. Bayern are top of the table after eight games, two points ahead of second-placed RB Leipzig having won six games and drawn two. After 13 all-competitions matches, Ancelotti’s win percentage in Bavaria stands at a more than healthy 76.92 percent.

However, that win rate falls slightly short of Guardiola’s Bayern record. Across his three years in Germany, the Catalan won 80.39 percent of his games. At this stage of last season, Die Roten had won all eight games and netted 28 goals compared to the current campaign’s 20. 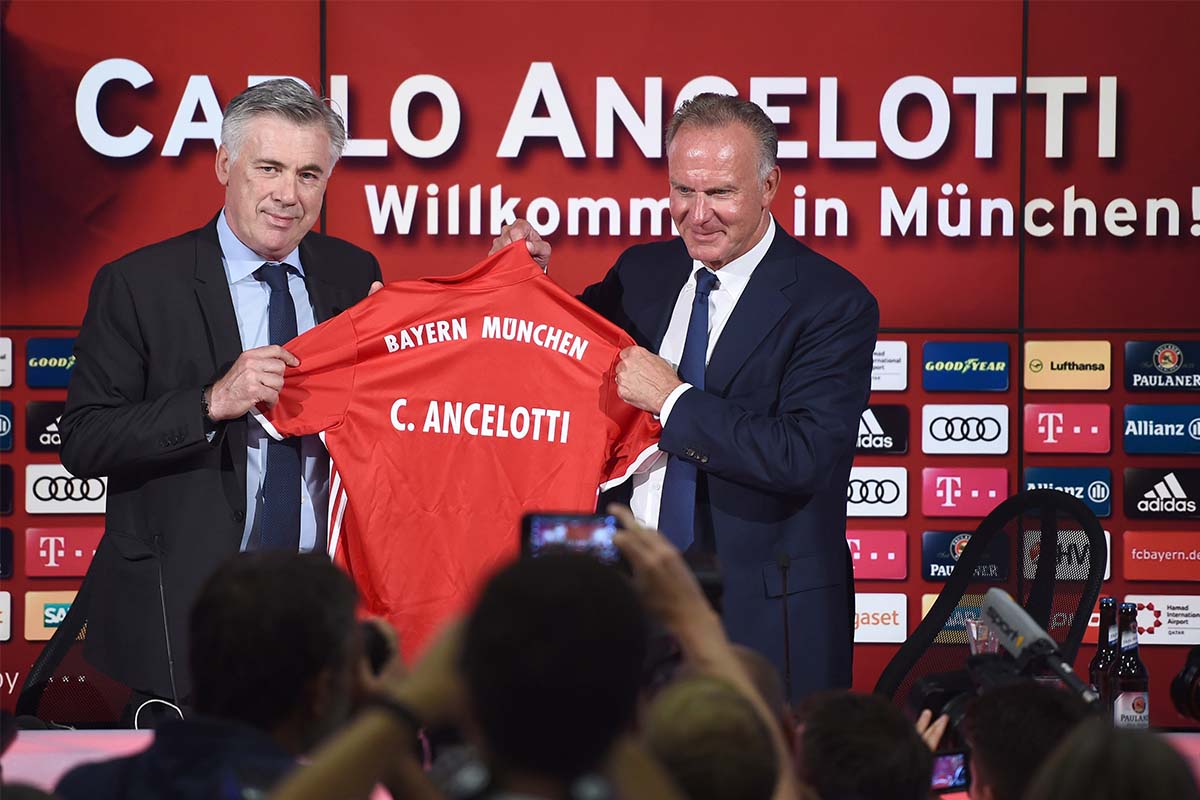 But, after eight games of Guardiola’s first season in Munich (2013-14), Bayern had had won six and drawn two, just like Ancelotti’s side. They’d even managed fewer goals, with 16 scored and four conceded.

Bayern are currently averaging 2.5 points per game under Ancelotti. If that pace is maintained, they’d finish the campaign on 85 points – more than enough to win the league most seasons.

In Guardiola’s first year, FCB finished with 90 points, the following term saw a drop to 79 points – although the title was secured before a late-season slump – and 88 points last season.

So, despite the fact that they may be slightly behind the curve of Guardiola’s reign, Ancelotti’s Bayern are doing just fine.

Yet there is something missing on the pitch at the moment. Results have been pretty good — the only blemishes on their copy book to date are draws at home to high-flying FC Köln and away to Eintracht Frankfurt. But there seems to have been a significant drop-off in intensity since Guardiola’s departure.

The Catalan coach is well known for being incredibly demanding of his players. One of the base tenets of his philosophy is that, when possession breaks down, players must press the opposition frantically for six seconds before falling back into their defensive shape. Training sessions are meticulously planned and tactical principles are drilled into the squad.

In this sense, Ancelotti is the antithesis of Guardiola. The 57-year-old Italian doesn’t believe in over-instructing his players. For most of his career he has worked with elite footballers, and he puts his faith in experienced and talented individuals to be able to problem solve for themselves.

Guardiola demands that his players string together a sequence of at least 15 passes as they build an attack, with the idea being that the rapid circulation of the ball will draw the opposition out of their defensive shape and create holes that can be exploited. 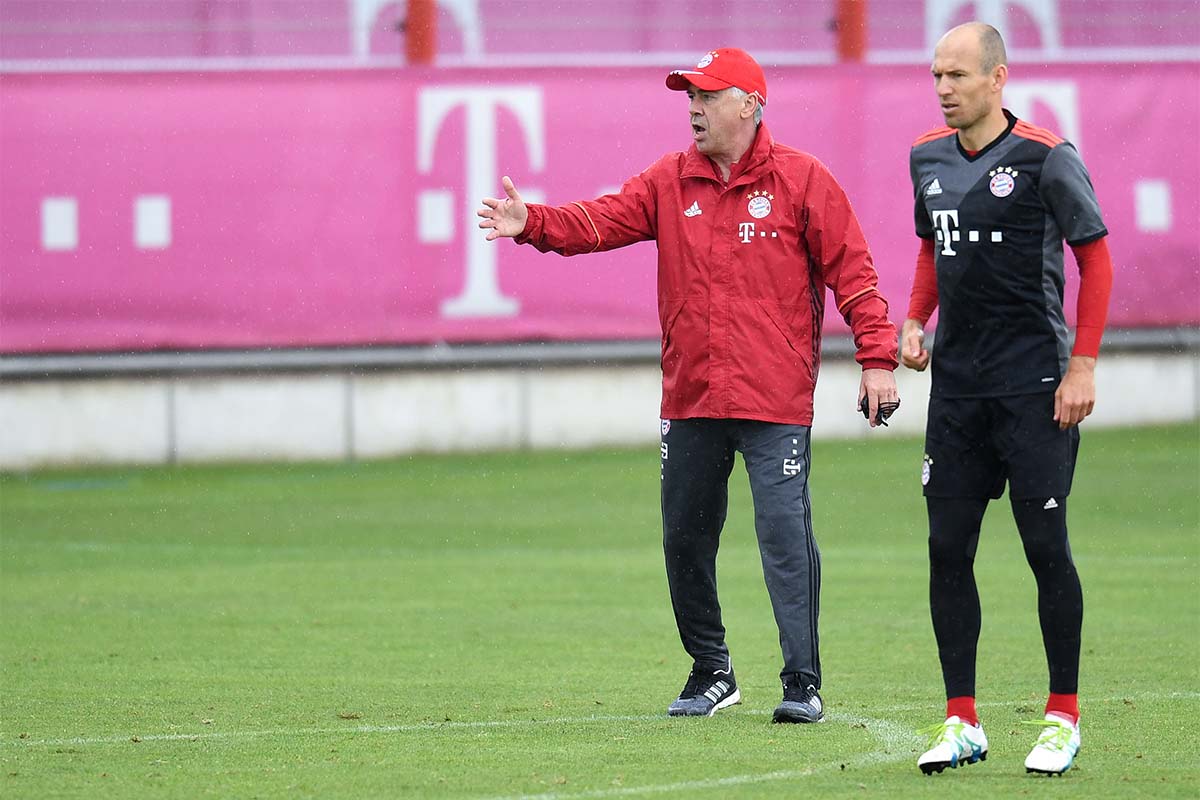 This has led to Bayern taking a more relaxed approach on the pitch. The tempo has eased off now that the players are out from under Guardiola’s demanding glare.

But, as such, signs of complacency have crept in; defensive errors have become slightly more frequent. The team’s average possession has fallen marginally to 61 percent, down from last season’s 63 percent. Pass accuracy has also taken a minor hit, down to 87 percent from 88 percent.

Interestingly, a statistic that could be perceived as a result of less of the control that had become customary for Bayern, is the fact that the average amount of defensive actions (tackles, blocks, clearances, etc.) that Ancelotti’s men take per game has risen to 34, compared to last season’s average of 24.

The new, laid back Bayern could be on course for a lower points haul than recent years, but they are still well on track for a fourth straight Bundesliga crown.

And, by holding a little bit of their energy back in the early part of the season, perhaps they will have more gas in the tank for the latter stages of the Champions League. After all, that tends to be Carletto’s way.