It’s difficult to pinpoint one specific area of improvement for Newcastle United as they prepare for life back in the Premier League. They return to England’s top tier in the best possible shape, having won the Championship with the joint-highest goals scored and the joint-fewest goals conceded.

Perhaps with this in mind, manager Rafa Benítez appears to be taking a more holistic approach to this summer’s transfer business, with central defender Florian Lejeune becoming just the Magpies' second addition since promotion.

The centre-back joins former Chelsea winger Christian Atsu in committing to the Premier League new-boys after signing a five-year deal after Newcastle forked out £8.7million for his signature.

Who is Florian Lejeune

Lejeune is a 26-year-old centre-back who spent most of the formative stages of his career in the French lower leagues. His first big break came when joining Istres, then in Ligue 2, in 2009. There, he was switched from defensive midfield to the centre of defence, and he didn’t look back.

His displays in the French second tier led to reported interest from several of Europe’s top sides, including Manchester United, Manchester City and Napoli. National sports daily L'Équipe went so far as to claim that Real Madrid were scouting the young defender.

At international level, Lejuene was included in the France squad for the 2011 Under-20 World Cup in Colombia. There he trained and played alongside the likes of Antoine Griezmann, Francis Coquelin, Arsenal transfer target Alexandre Lacazette and Kalidou Koulibaly, helping his country to the tournament’s semi-finals and an eventual fourth-place finish.

Eventually, after two years with Istres a move to established La Liga side and frequent continental qualifiers Villarreal materialised in 2011. But, despite impressing onlookers with his individual displays for the Spanish club’s ‘B’ team, he was unable to impose himself upon the senior squad.

Lejeune left for two years with Girona in the Segunda División, with a permanent move to Manchester City sandwiched in-between the two spells. With the Frenchman at the heart of their defence, the Catalan side had the second-best defensive record in Spain’s second tier in 2014/15, and the best record in 2015/16.

Having once more impressed outside of the top flight, Lejeune joined Eibar last summer for a transfer fee of around £1.3 million. With the high-flying Basque side, he became the cornerstone of a mean back line that conceded the ninth-fewest goals in La Liga, prompting interest from a number of suitors this summer.

What will Lejeune bring to Newcastle?

Newcastle’s current central defensive pairing of Ciaran Clark and Jamaal Lascelles formed a solid duet last season, but it is unclear if the two could successfully step up to Premier League level. With that in mind it’s worth comparing Benítez's latest signing with the existing centre-backs. 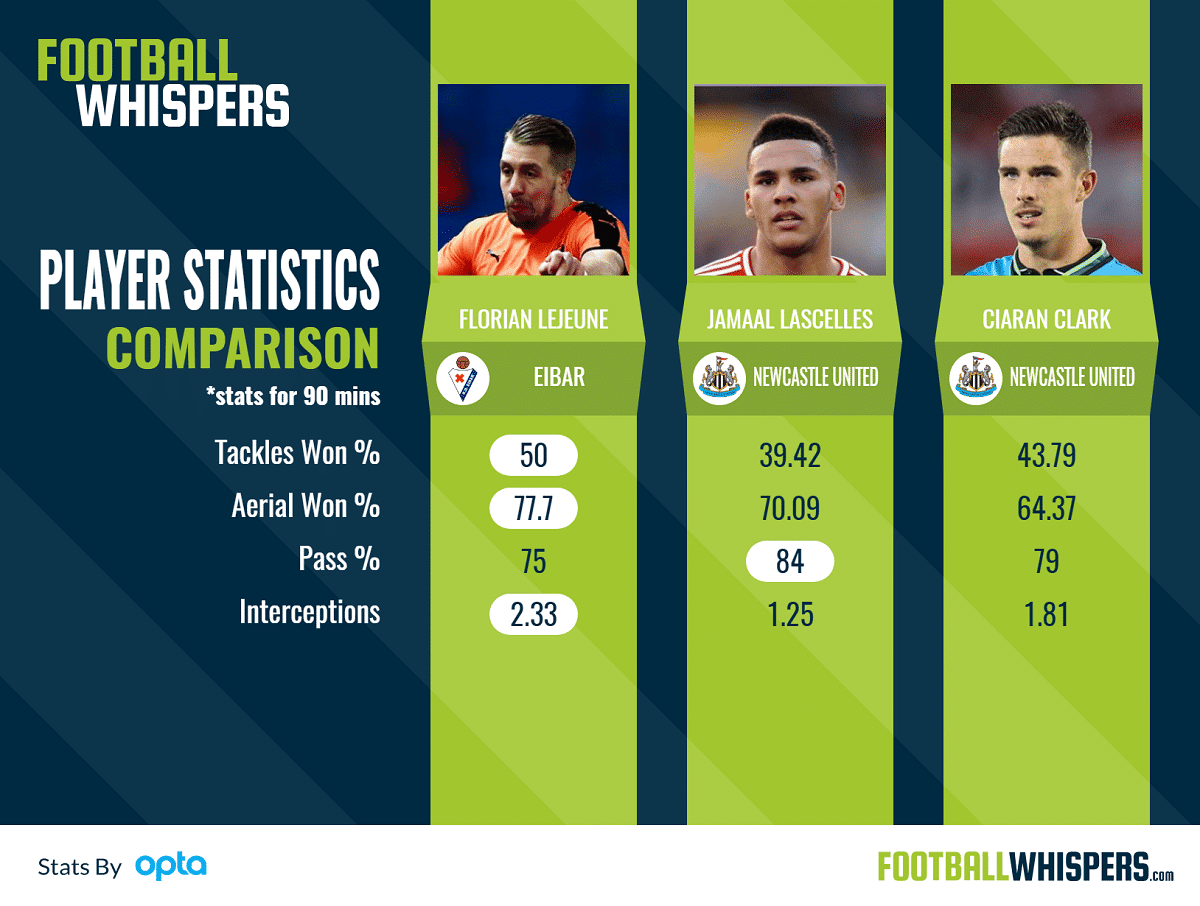 It’s worth pointing out that the Frenchman was part of a team that averaged less ball possession and it was therefore probable he would end up making comparatively more tackles. However, this theory doesn’t explain his higher percentage success rate in such duels.

Lejeune won 50 per cent of his attempted tackles last term, compared to Lascelles’ 39.42 per cent and Clark’s 43.79 per cent.

While stylistically the former Eibar man is aggressive and good in the air, he didn’t quite win as many headers per 90 minutes as his new team-mates, averaging 3.27 to their 4.01 and 3.32 respectively.

But that statistic may be down to the overarching methods present in Spain’s top flight, where technique reigns and direct balls are this perhaps less prevalent. Certainly, Lejeune has no deficiency in this department, as he won a higher percentage – 77.7 – of his aerial duels than Lascelles – 70.09 per cent – and Clark – 64.37 per cent.

The 26-year-old’s reading of the game also appears to be substantially better, as he made an average of 2.33 interceptions per 90 minutes last term, a number that was significantly higher than that achieved by either of Newcastle’s centre-backs.

And, if it’s defensive fundamentals Benítez wants, the Eibar star’s 0.61 blocks was a higher average than either of his current primary central defensive options.

Technically, Lejeune is comfortable but relatively unspectacular on the ball. Despite attempting fewer passes than either Lascelles or Clark, he achieved a lower pass completion rate.

However, it’s worth pointing out that he also had a longer average pass length, something that is indicative of the fact that he was operating within a team that played more long balls per game than any other side in LaLiga.

Speaking to Football Whispers, Spanish football expert Euan McTear stated that the player was “very much [suited to the Premier League].

“He's pretty no-nonsense. Not the best passer, but tall, strong and can get his head on the ball.”

Where will Lejeune fit in?

It seems unlikely Benítez – who earlier in the summer was reportedly close to quitting over Newcastle's failure to land his transfer targets – has signed the French defender to sit on the bench having cost just shy of £9million.

That means one of Lascelles or the hugely impressive Clark having a fight on for their place in the starting XI next season.

Lascelles was a Premier League rookie when Benítez was appointed at the end of the 2015/16 season but the former Real Madrid coach pitched him in as the Magpies battled the drop. Clark, meanwhile, was one of the Spaniard's most impressive signings last season following his switch from relegated Aston Villa.

Benítez was, famously, the first big-name manager to extol the virtues of rotation. It remains to be seen whether he will continue that policy with Newcastle's central defensive pairing, however.