When the rumours first began to spread, they were met with the social media equivalent of shoulder shrugs and nervous looks. Finally, Leeds United’s next manager was being revealed. And yet, at the same time, the club’s next manager remained unknown.

Thomas Christiansen isn’t a name many English football fans recognise, and this is understandable. He spent his playing career in Denmark, Germany, Spain and Greece. He was a striker, but he was only truly prolific towards the back end of his career, during a spell with German club Bochum.

He retired from playing in 2006 before being appointed assistant manager by Al Jazira in the UAE seven years later. From there he went to Cyprus, where he had managerial spells with AEK Larnaca and APOEL Nicosia. Having left the latter in May this year, he has now succeeded Garry Monk in the Leeds hot-seat.

Earlier today, club chairman Andrea Radrizzani tweeted: “White smoke from [Elland Road]! Big day for [Leeds] fans. Thank you for the patience and support, our manager will be announced very soon.” Soon after, reports surfaced suggesting Christiansen was set to be confirmed as the club’s new head coach.

This was then made official with a statement on the club website that read: “Leeds United are delighted to announce that Thomas Christiansen Tarín has agreed to become the new head coach at Elland Road.” 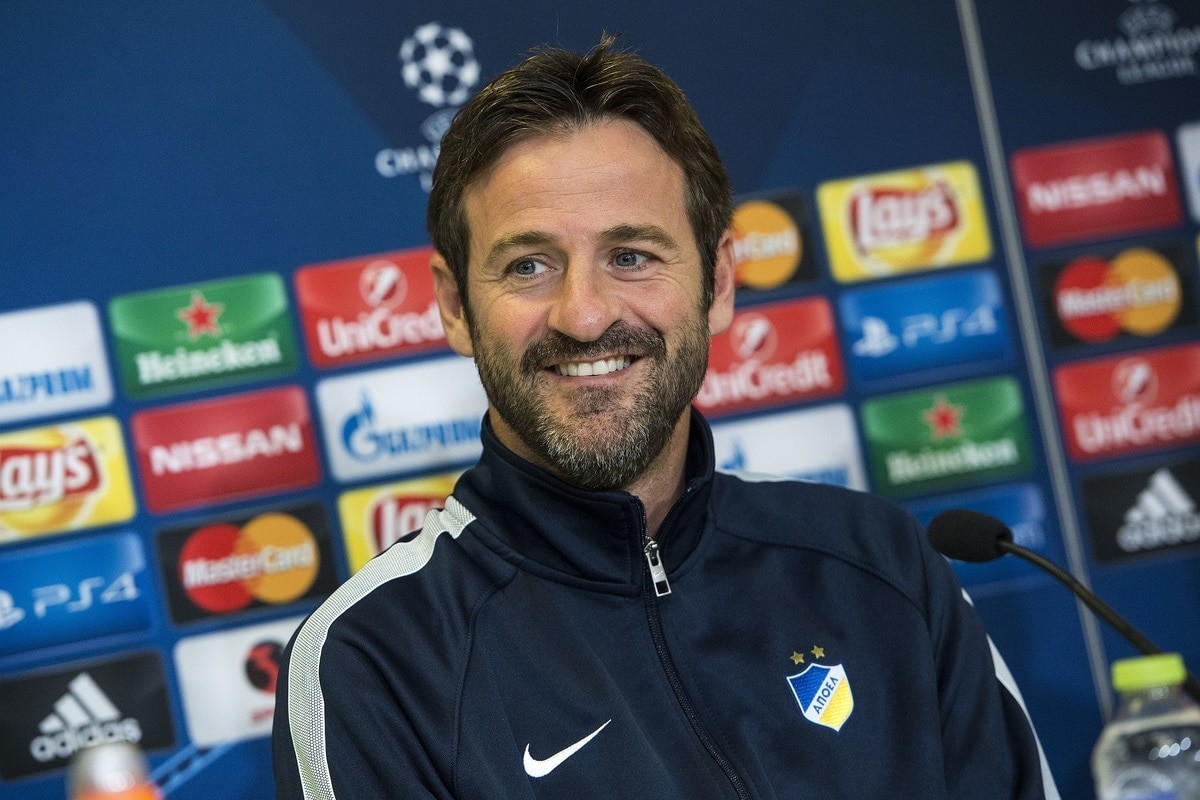 Leeds managing director Angus Kinnear went on to state: “We wanted to appoint someone who can help us create a winning culture at the club and unite everyone connected with Leeds United, from the players to the supporters, ultimately taking the club back to where we all feel we belong.

“Thomas was…on our radar from the very early stages of the process and quickly established himself as the outstanding candidate. We are confident we have found a man with who can work with us to take the club to the next level.”

So many of Barcelona’s great players of the early 1990s went on to become managers at the top level, mainly thanks to the influence of a certain Johan Cruyff. The Dutch icon had a profound impact on the Catalan giants, leaving a legacy not only of great football but of enchanted pupils.

Pep Guardiola, Ronald Koeman, Eusebio and Michael Laudrup are four of the highest-profile disciples who went on to forge their own path in coaching. However, many others followed the same path without the same level of attention, perhaps because they weren’t quite so influential.

Christiansen joined Barcelona in 1991 and spent five years with the club. Most of that time was spent in the B team or out on loan, however he couldn’t help but be influenced by such an iconic manager. “With him (Cruyff) the football was something different,” the new Leeds boss said of his experience working in such close proximity to Cruyff.

At 44 years of age, Christiansen remains in the formative stages of his coaching career. He has, to date, only had two managerial spells (not including his latest post). However, both of those spells were successful.

AEK Larnaca finished the 2013/14 campaign in eighth place in the Cypriot First Division. Christiansen took the reins in April 2014, however, and guided them to greater heights. In his first full season in charge, they finished second, just three points behind APOEL. And in his second term they again finished second, albeit with an improved average points per game.

Two consecutive years of progress led to him being appointed manager of APOEL, the reigning champions. This job provided difficulty in the form of heftier expectations, but the Spaniard handled the pressure well, leading the club to another title success.

What was more impressive than this league title defence, however, was the fact Christiansen led the Cypriot side into the last 16 of the Europa League. And, far from being handed an easy route, this involved a historic victory over Olympiakos to win Group B, followed by a knockout stage win over Athletic Bilbao.

While he developed an impressive resume in Cyprus, Christiansen has yet to taste management in other countries. Thus, his appointment to the role of Leeds head coach could be seen as yet another step into the unknown for the 44-year-old.

However, while his background as a Barcelona player may encourage some to put him in a box with other former Blaugrana players-turned-coaches, he shows signs of having the adaptability required to succeed.

Finally, in terms of the zones through which their attacks came, only 21 per cent were through the middle – the seventh-lowest percentage in this particular area.

When asked about carrying on the methods he learned under Cruyff, Christiansen said: “I wanted to continue that at APOEL, but because of the players we had in the squad I had to find other systems, other solutions. Right now we're playing a little bit different, but with the same mentality.”

Evidently, Christiansen is a pragmatist, something only backed up by the way his APOEL side played. Under his auspices, the Cypriot outfit were extremely well organised without possession, with their 24 league goals conceded a club-best in almost half a decade.

They tended to line up in a rough 4-2-3-1 system, though in the defensive phase this became a 4-4-2. The two wingers would tuck back into the midfield line and the attacking midfielder would move up to support the lone striker in pressing the opposition’s back line. 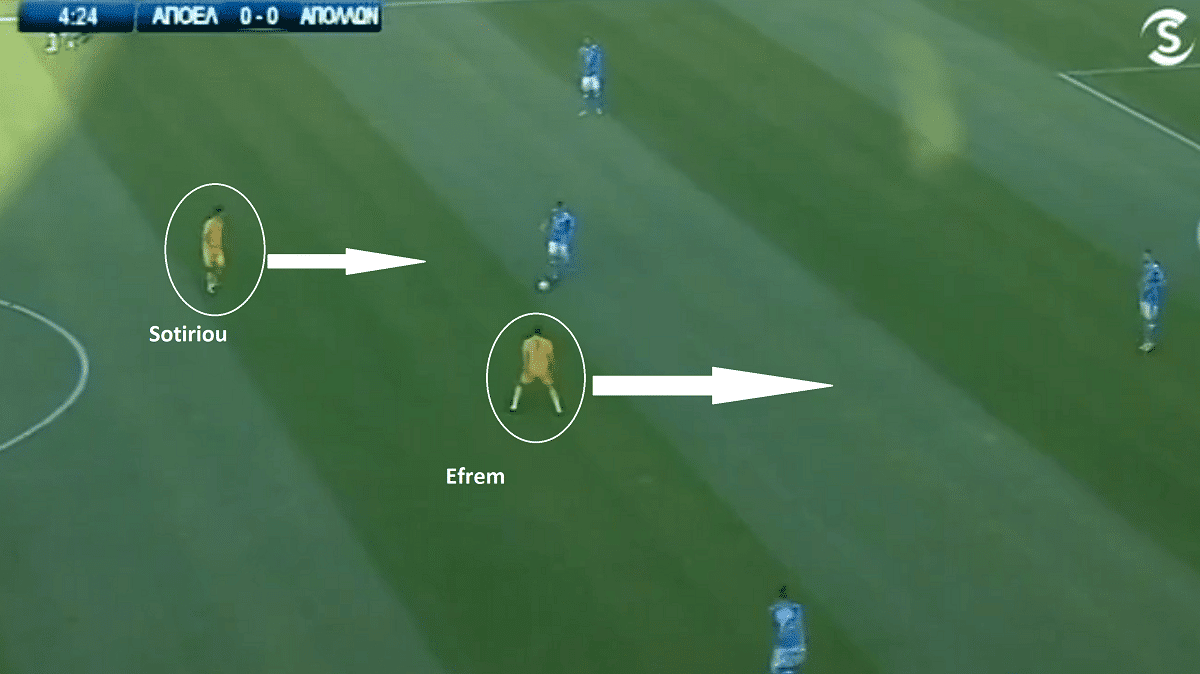 As shown above, the attacking midfielder (Efrem) and striker (Sotiriou) would retain good horizontal compactness, essentially allowing minimal space for passes to go between them, trying to force the opposition into long balls, sideways passes or turnovers.

If and when the opposition played through APOEL’s first line of pressure, intense man-oriented pressure was applied by the second line of four midfielders. Again, compactness was key, with players maintaining close distances to each other, as seen below. 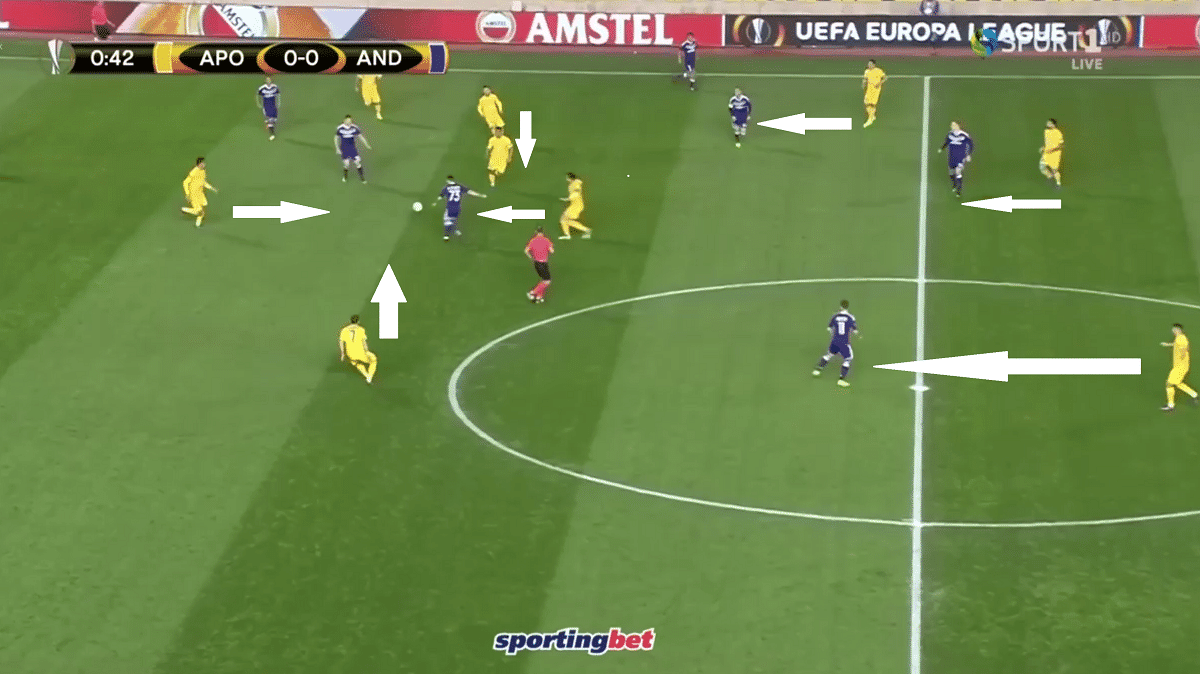 To back up this intense pressure applied by the midfielders, Christian’s back four would push up to hold a line just below the halfway line. This is illustrated in the below still. 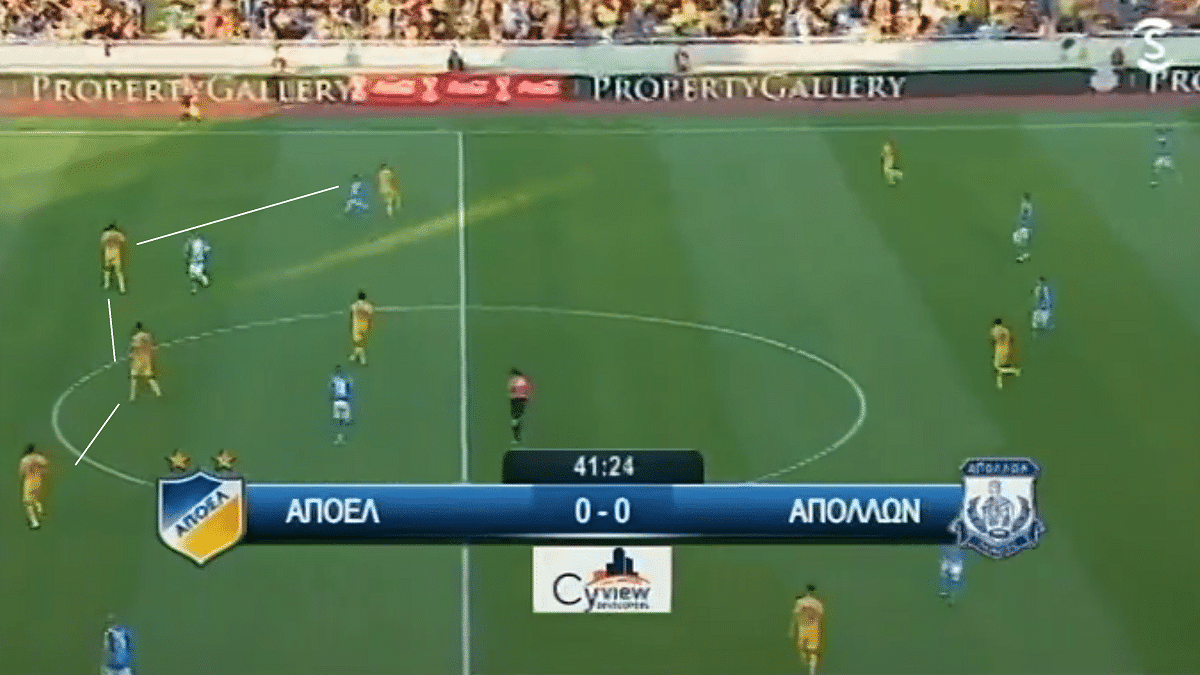 When APOEL had the ball, they would show one characteristic of many Cruyff-disciple-led sides, with the goalkeeper – former Barcelona youth teamer Urko Pardo – supporting the build-up. This is seen in the below graphic, where he comes well out of his own penalty area to be involved and help orchestrate possession. 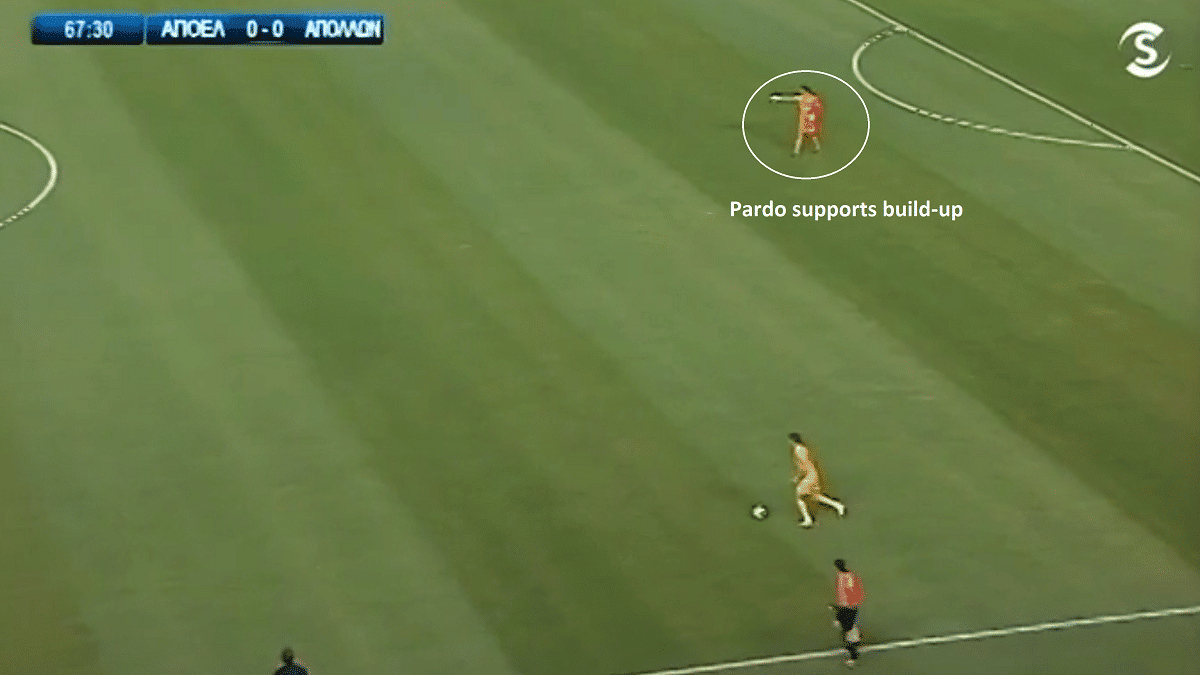 The pushing up of the goalkeeper was important to Christiansen’s style of play with the Cypriot champions, as he clearly wanted to open the field up as much as possible when his side had possession.

With this in mind, the ‘keeper would take up a high position, and the two centre-backs would pull wide. This would in turn allow the two full-backs to push high down each flank, while the two wingers moved infield onto the same forward line as the striker. From there, the front three would take turns moving deep to offer a viable forward pass to their team-mates.

One of the central midfielders, often Vinicius, would offer a safeguard to the centre-backs in possession, dropping deep – sometimes between them, sometimes to the side – to give them a short-distance, low-risk pass. From there, the ball would often be moved forward vertically. 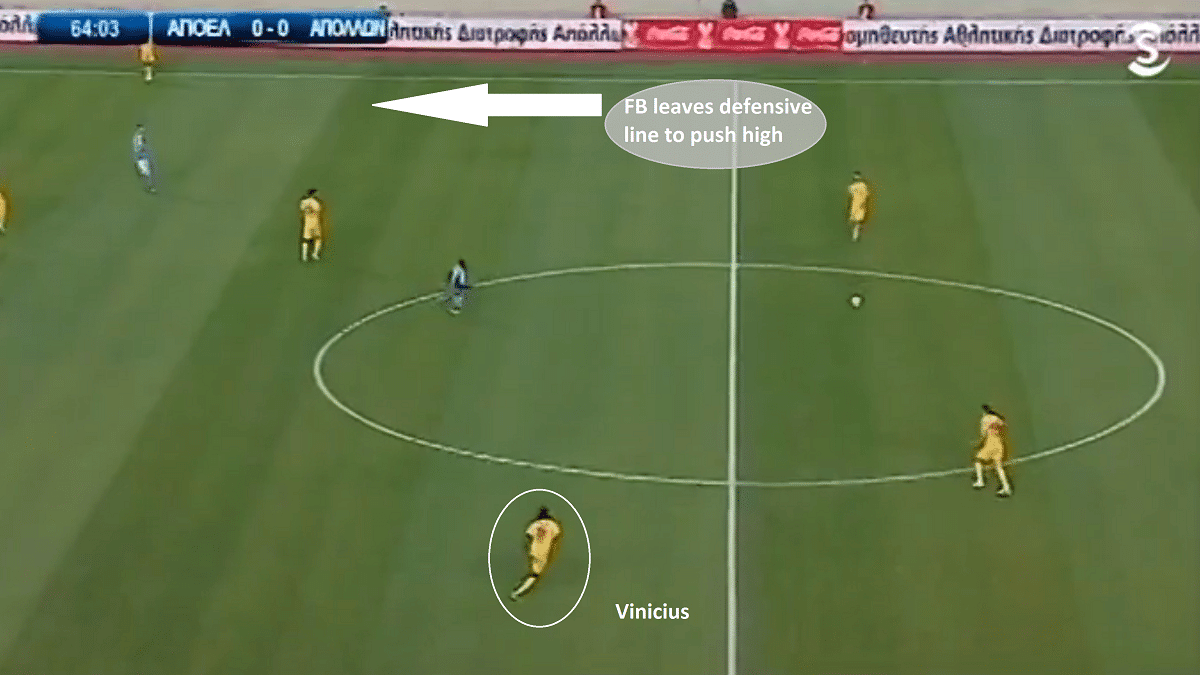 Whether or not Christiansen is successful at Leeds depends not simply on his coaching expertise and tactics, but on his man-management style and the quality of the summer transfer business conducted by the club. The latter two aspects are at present unknown or undecided.

However, on the basis of his approach to teambuilding and the tactics seen in his successful APOEL side, he may look to continue the same rough 4-2-3-1 shape used by Monk last season, albeit with slightly more emphasis on retaining effective possession.

Here’s how Christiansen’s Leeds could line up: 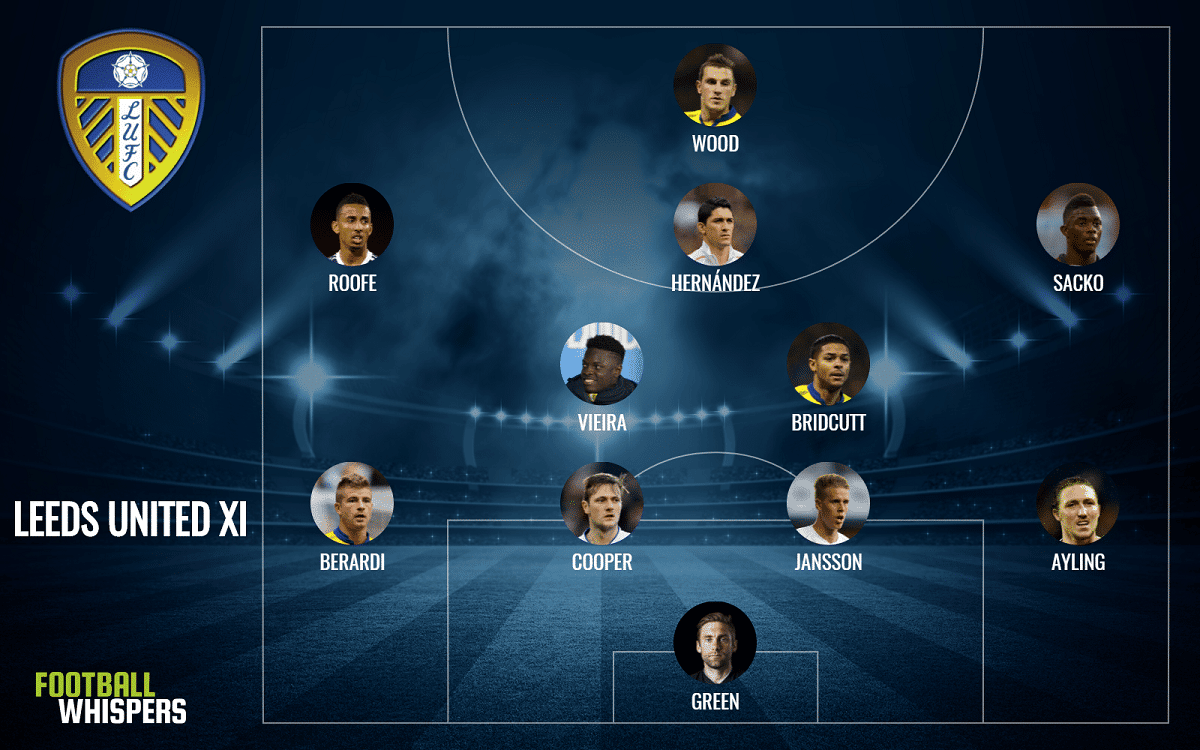