Over the last six years, Samir Handanović has been linked with countless clubs and touted as a possible replacement for some of the game’s truly great goalkeepers. Before they signed Manuel Neuer, the Slovenia international was widely tipped to join Bayern Munich, while he was also mentioned as a potential Barcelona signing as they looked to move on from Victor Valdes.

Interest from Manchester United, Liverpool and even Juventus has also been noted over that same time frame.

With many of the men between the posts expected to be on the move this summer, the 32-year-old could well be part of a game of musical chairs that could affect some of the continent’s biggest clubs. Real Madrid seem almost certain to make a splash as they seek a new acquisition to wear the gloves at the Bernabeu, David De Gea of Manchester United and Tottenham’s Hugo Lloris among the names mentioned in recent weeks.

No matter where Los Blancos get their man from, you can be sure that Handanović’s name is among those expected to fill the subsequent void left behind and there are two main reasons for that. Chief among them are the ongoing problems at his current club Inter, the Italian giants having had three different owners and appointing six new Coaches since he arrived in the summer of 2012.

Secondly, as Andrea Stramaccioni, Walter Mazzarri, Roberto Mancini, Frank de Boer, Stefano Vecchi and Stefano Pioli would all attest, Handanović is simply a brilliant goalkeeper. He has proven that over his entire career, but on Sunday night in Turin he showcased just how decisive he can be for the Nerazzurri. Playing against Juventus in a tightly contested Derby d’Italia, he was arguably the man of the match and the only reason the Old Lady emerged as 1-0 victors following Juan Cuadrado’s unstoppable match-winning goal.

As can be seen in the video above, the game began with a number of routine gathers for the shot-stopper, but he was called into more serious action when Miralem Pjanić lined up a free kick shortly before half-time. Handanović tipped it over the bar with a superb save, but after the break he arguably topped that when denying the Bosnian midfielder one-on-one with incredible reactions.

That showed the mental toughness Handanović has developed over recent years, constantly and consistently able to shrug off the goals he does concede to boast a number of awe-inspiring records despite Inter’s struggles. Now in his fifth season with the club, he has made 167 league appearances for the Nerazzurri, during which he has made a staggering 508 saves and kept 58 clean sheets for a team that has floundered to 9th, 5th, 8th and 4th-placed finishes in Serie A.

His expertise as a shot-stopper is undeniable, allying excellent positioning to incredible reflexes and safe hands with the athleticism to make saves many others could not. Standing 6’ 4” tall he is a commanding presence in the air and can be relied upon to relieve pressure when crosses are fired into the box, but his ability truly comes to the fore when his team concedes a penalty.

When an opponent lines up from 12 yards, it is now a surprise when the ball hits the back of the net rather than when Handanović makes a save. Back in the 2010/11 campaign – two seasons before joining Inter – he repelled six penalty kicks, a tally which equalled the all-time Serie A record which has stood since 1949.

Age and experience have only seen this skill improve, with numerous strikers now looking worried at facing a man which such a track record of denying spot-kicks. He has now stopped 22 attempts in the Italian league, just two behind the highest all-time mark currently held by former Inter man Gianluca Pagliuca. “I think he’ll beat my record for penalty saves,” the old man said back in 2015. “I would be happy to keep it, but he will overtake me soon and having such a good goalkeeper is a great advantage.”

New Nerazzurri boss Pioli is discovering exactly that, constantly relying on his goalkeeper to keep Inter in matches, a trend that he knows cannot continue if the club is to return being truly competitive. “I think last season Samir performed miracles and I hope he can continue to do that, the Coach said in December, “but the team has the right characteristics to be more solid than we are right now.”

4 – Inter have kept four clean sheets in their last six Serie A games, as many as in their previous 22. Stronghold.

Perhaps it is no surprise that he had appeared in each of the side’s seven consecutive league wins before Sunday’s visit to Juventus Stadium, keeping four clean sheets after managing just three before that streak began. So while it is a brand new start for the club under Pioli, it is the same old

Handanović; making saves, denying penalties, and being a good old fashioned ‘keeper rather than pretending to be an outfield player at every opportunity. 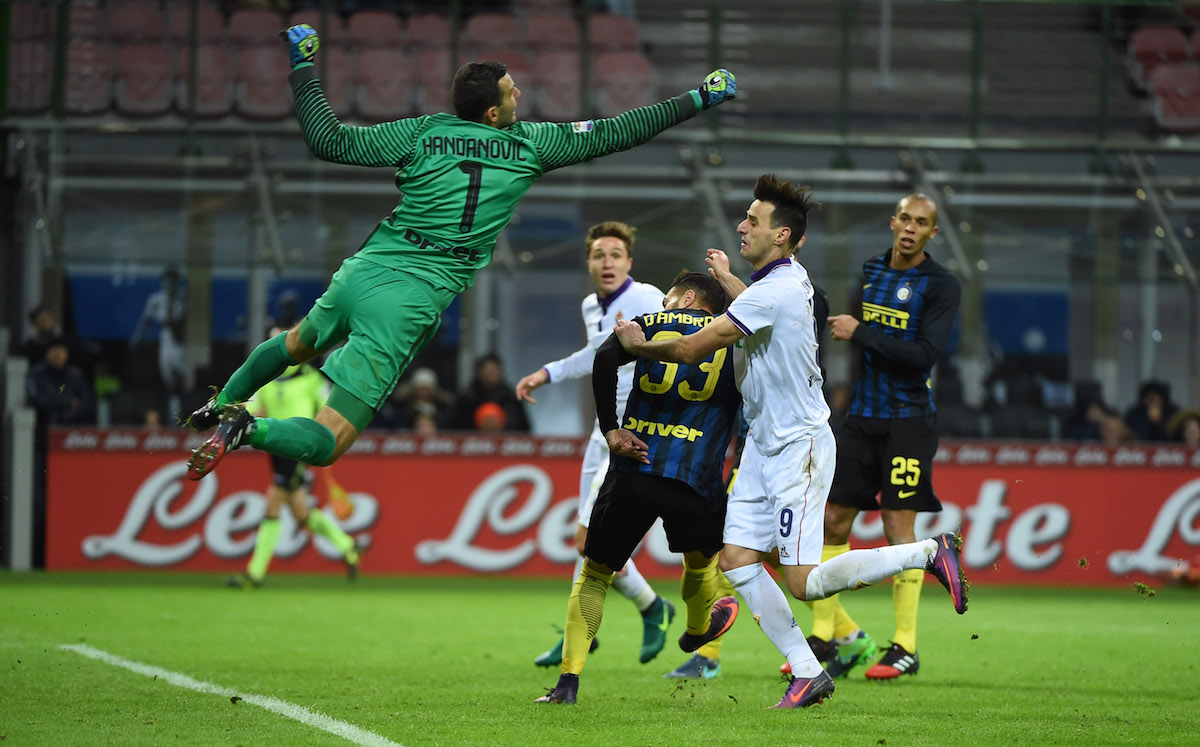 Indeed, he is far more likely to be pictured wearing a cap to keep the sun from his eyes (he does, regularly) instead of wandering up the field and be photographed contemplating the meaning of life in the centre circle like so many of his contemporaries. Rarely does he get involved in the build up play and he certainly wouldn’t feel at home acting as a sweeper in a Pep Guardiola team, preferring instead to focus on the goalkeepers of yesteryear.

“I loved Peter Schmeichel growing up,” he confessed in an interview last year, and like the great Dane he is unafraid of barking at defenders when they make a mistake. Teams could do a lot worse than give him a chance to taste Champions League action for the first time, although he still hopes to help Inter return to Europe’s elite competition.

Like Handanović facing a penalty, we must simply watch and wait.