Celtic have plenty of creative, attack-minded midfielders and nippy wide men. But, when you’re looking to channel domestic dominance into something grander, having something simply is not enough. Building, improving, progressing – these become the defining buzzwords of success.

The reigning Scottish champions are celebrating a season of football without defeat on the home front. They won the Scottish Premiership at a canter, and added the Scottish Cup and League Cup with a couple of final victories over Aberdeen. Yet, rather than rest on those substantial laurels, they are reportedly considering adding Viktor Fischer to their ranks.

The Dane was, once upon a time, regarded as one of the finest young talents of his generation. He came through Ajax’s prestigious youth academy and, at the age of just 22, has already been a senior internationalist for half a decade. However, despite a promising beginning, his career has tailed off of late.

Celtic, in a bid to bolster their squad ahead of a 2017/18 season in which they will undoubtedly seek to move forward continentally through Champions League progression beyond the group stages, could revive Fischer.

After spells as a youth with both AGF Aarhus and Midtjylland, Fischer arrived at Ajax in 2011. The move to Dutch football came shortly after the player had turned heads with some strong performances at that year’s FIFA U-17 World Cup.

In a squad that featured a number of other promising starlets, including Southampton’s Pierre-Emile Højbjerg, RB Leipzig’s Yussuf Poulsen and Real Betis’ Riza Durmisi, the attacking midfielder shone, scoring one of his country’s three goals on route to a group stage exit.

Knocking back several reported suitors in some of Europe’s top leagues, including Manchester United, Chelsea, Manchester City and Inter Milan, Fischer wasted no time in making his mark at Ajax.

He was an integral member of the under-19 side that finished runners-up in the 2011/12 NextGen Series. Indeed he was the joint-top scorer in the tournament, hitting seven overall. Two of those goals came in a 3-0 quarter-final thrashing of Barcelona, and three came in a 6-0 semi-final dismantling of Liverpool.

Ajax’s history is littered with exceptional homegrown players and attractive attacking football. They also have a fine tradition of developing young Danish talent, with Tottenham Hotspur’s Christian Eriksen the most successful recent example. 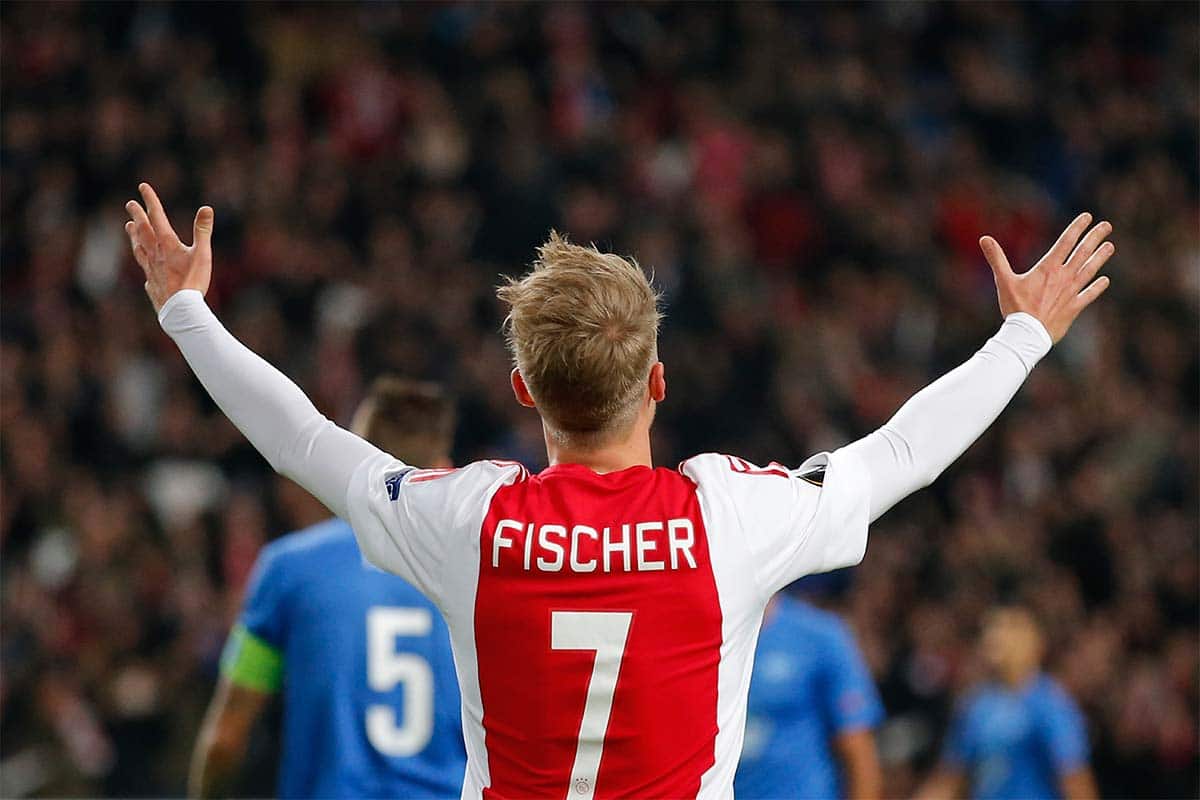 Fischer seemed destined to follow in his compatriots footsteps initially, graduating seamlessly from youth to senior squad. In his first full campaign he scored 12 goals in 33 appearances across all competitions. He was still only 19 years of age at the time.

However, a gradual decline in form over the following three years would see him lose his place in the side. While a hamstring injury that kept him out for most of 2014/15 didn’t help, the youngster’s statistics showed an undoubted recession in output.

And these numbers only dropped further upon joining Middlesbrough.

Last summer, Fischer joined the then-newly-promoted Premier League side in the aim of finding personal rejuvenation. But, in a team focused on defensive solidity, he lacked time on the ball. Unsurprisingly, his dribbles and key passes per league game hit respective career lows of 0.8 and 0.5.

WHY CELTIC AND FISCHER COULD BE PERFECT TOGETHER

Brendan Rodgers’ first campaign as Celtic manager was an unadulterated success not just in terms of the number of trophies his side hoisted, but in the way they won those trophies. Playing a fluid, fast, attractive form of attacking football, they defended their status as Scottish champions in a convincing and exciting manner.

Key to this style of play were a collection of attackers and attack-minded midfielders whose versatility and quality on the ball were essential to the manager’s ideals. Stuart Armstrong and Callum McGregor stepped up as creators, while the pace, dribbling and flair of Scott Sinclair, James Forrest and Tom Rogic proved pivotal.

Rodgers often showed a desire to pack his side with as much of this offensive talent as possible in an attempt to overload and overwhelm opponents. Clever and plentiful movement off the ball, as well as intricate combination play and a willingness to receive the ball in tight spaces, were central to his game plan, and Fischer would fit the method.

Quick of wit and foot, the Dane is a sharp mover and thinker in and around the opposition penalty area. While nominally a winger, he enjoys operating more centrally where his technical abilities and tactical intelligence can be put to good use.

When asked who his Premier League idol was as a boy, Fischer stated: “I was supporting Arsenal when I grew up and I was watching Thierry Henry all the time. [He had] calm finishing [and] fantastic control.”

Perhaps not coincidentally then, the 22-year-old is a sort of frustrated wide man who shows a tendency to want to play further infield. This is something he relished during his time at Ajax, but has been given less opportunity to do in his one and only year with Middlesbrough so far. Indeed, he started just six league games in 2016/17, and four of them saw him start on the wing. 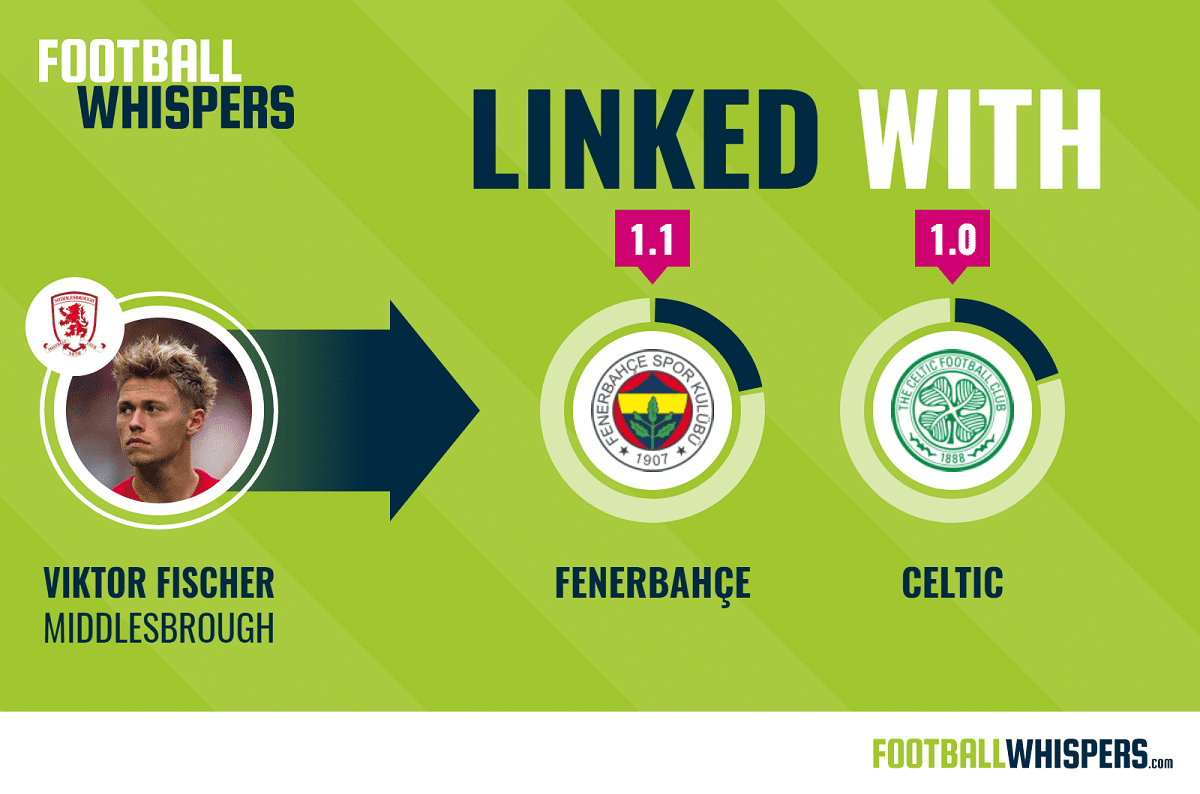 According to Sky Sports, Celtic are leading in the race to sign Aberdeen’s Jonny Hayes after Cardiff City pulled out of a potential deal. This pursuit has puzzled some onlookers; while the winger is a proven performer in the Scottish Premiership, it is questionable whether he would actually improve upon the champions’ existing options.

Patrick Roberts, who has returned to Manchester City after a strong one-and-a-half year loan spell in Glasgow, has also been linked. However, the Englishman may receive a chance to impress Pep Guardiola at the Etihad next season.

Considering the uncertainty surrounding the aforementioned duo, Fischer would appear the best option of the three to boost Celtic’s attack. He would suit the style of play and has plenty of potential yet to fulfil.